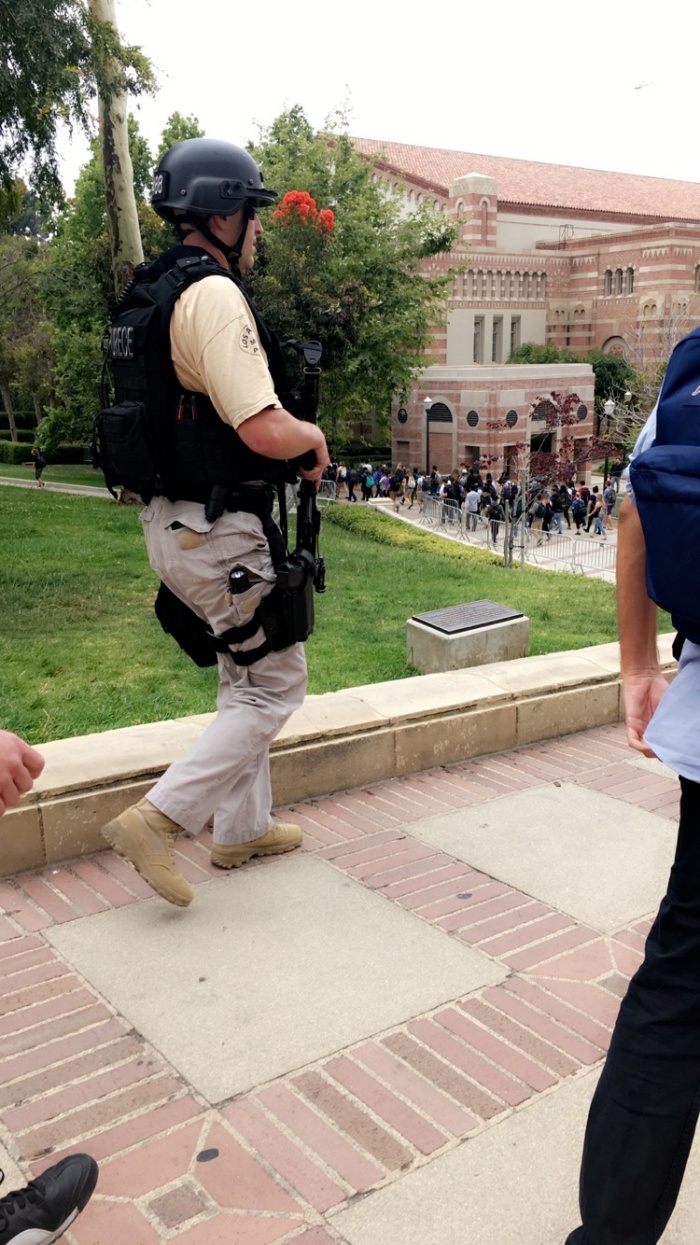 At first, this morning seemed no different than any other Wednesday. I overslept a little, but I got dressed, wished my roommate good luck on her finals, told my other roommate to have a great day, and hopped in my car to meet my boss for breakfast.

Things felt a little off because the sky was gray and dreary, but usually I like the sky like that. But it was a dark June 1st in more ways than one.

I got the text when I parked my car.

“There’s a shooting on campus don’t come,” it read.

My heart was pounding so hard that it fell to the bottom of my stomach.

The rest of the texts came quickly. They felt like a blur. I asked my roommates where they were. Made sure everyone was safe. I got about 35 texts in the next 10 minutes from people asking if I was okay. I assured everyone I was fine – I wasn’t even on campus. I was at a cheery, adorable little restaurant, and life was continuing around me. But I couldn’t focus. I couldn’t think straight. All I could picture in my head was a gunman running around campus while all of my friends were hiding in their classrooms, scared for their lives. I was desperately asking the people around me in the restaurant if they had heard anything on the news. I needed to know what was going on.

Was I supposed to just continue on with my day? I couldn’t do anything to help, obviously. But it felt selfish and horrifying to just drink a smoothie and go on with things like everything was normal.

The rest of the day, everyone was texting each other about what was happening. My roommates’ professors didn’t take the threats seriously at first. They continued lecturing, left the lights on, and wouldn’t turn off their microphones. One professor told the class she wouldn’t stop teaching because the material was going to be on the final. I heard similar stories later on from multiple students.

My friends warned me not to come back home. First someone said there were two confirmed shooters. Then I was told there were 4. I heard the shooter was contained in the Engineering building, but then someone said that multiple shooters were spreading out all over campus. Then I heard that people were shooting up the dorms, and they were moving to the apartments next.

I was sick to my stomach. I just wanted to know what was actually happening. Was the chaos real? Was this actually real life?

I felt a horrible sense of guilt. I was so grateful that I wasn’t there. But was that terrible of me? What were the chances that this would happen when I was nowhere near campus? Why were my friends and so many other students the ones who were hiding in classrooms, barricading the doors, crying, sickened with fear for their lives, but I was safe?

Every word that came out of my mouth the rest of the day felt like useless air. I didn’t know what I was saying, and I couldn’t really think.

We never think that things like this are going to happen so close to us. We hear about shootings and attacks, but they seem so far away. It’s always another state, another city, another school. Not us. These tragedies occur so often that society has become desensitized to them. We have become detached. It’s not okay.

After the shooting at UCSB, I was horrified. I cried for days. I was worried sick about my friends. And although it didn’t happen at my school, I was terrified out of my mind to walk to campus for the next few weeks. I felt like nowhere was safe. I knew no one could protect me. I didn’t know if UCLA was next.

When is this going to stop? The shootings, the attacks, the hatred. We should not be afraid to exist in the world. We should not feel as though we are never safe, and that that’s just the way it is. It’s frightening enough that something truly uncontrollable, like a heart attack or natural disaster, could occur at any second and change our lives forever. But we shouldn’t have to live with the added terror that at any moment another human could decide to take our lives away. That is something we need to change.

Why does it take something to happen so close to us for us to really feel the fear, the compassion, and the frustration? Even when it does happen “close to home,” emotionally or physically, why do people still not take it seriously? Since when is taking a test, final or not, more important than a shooting?

In the middle of the lockdown, one professor told her students, “This is nothing. I grew up in a rough neighborhood.” That statement disgusts me. Every time someone’s life is threatened, it’s a fucking BIG DEAL. Do not diminish someone’s fear, someone’s feelings, or the worth of a life. Humans are losing compassion. Tragedies like shootings are seen as just another daily occurrence. How many school shootings have there been in the past 10 years? How many times does this have to happen? What is it going to take for us to fully address this problem?  Why is nothing different?

I am so angry. I am so scared. I am so upset. I’m scared for myself, my friends, my family, and future generations. I don’t want to be afraid to send my children to school. I don’t want to pack my 5-year-old daughter’s lunch and worry that when I drop her off, someone might come into her classroom and go on a shooting rampage.

We always try to understand what motivated the person’s actions. We always ask, WHY? How did he have a gun? Why did he do it? It’s in our human nature to search for a reason. To look for someone or something to blame. We try to explain away the terror. Because the only way we can comfort ourselves and diminish our fears is to make sense out of things. We tell ourselves there has to be a logical explanation. The alternative, that there is no explanation, is something we don’t want to face.

Why he did it and why so many others have taken similar actions is an issue on its own. A HUGE issue that I could write a novel about. The pressure we feel in today’s world, in all aspects of life, is horribly immense. People feel trapped and hopeless. They see no way out. And they take drastic, unfortunate measures.

I don’t know what to do. I don’t know how to change things or how to help. The issue of gun control is complicated. Politics, emotions, money, and alliances are all tied up in it. I don’t know what to address first – easy access to weapons, or the motivations behind using them. Why is violence commonplace, and why has society evolved to make people feel like it is the only answer? There is no easy solution. But I know that things have to change, because no one should live in fear of simply being in the world. And that’s how I feel right now.

Today was horrible, but it put things in perspective. What was the last thing I said to the people I love? Who do I wish I was with right now? I thought about what I want in my life, and how quickly everything can be taken away. Time is short.

I want to do all of the things that make me happy and feed my soul, and I want to do them right now. I want to make other people happy. I want to tell everyone that I love them and appreciate them. I want to help someone. I want to live every second being the best person I can possibly be. All of the other bullshit doesn’t matter. We spend so much of our lives worrying about petty problems, getting stressed out about trivial issues. We overcomplicate things and create problems out of nothing. We get caught up, and we forget the big picture.

The saddest part is that this tragedy, like so many others, will catch everyone’s attention for a week, but then it will slowly trickle off over time. Most people will start to forget. They will move on with their daily lives until this happens again. And someone else will bring this problem up again. The cycle will repeat. So when will it change?

Nothing is going to change unless somebody makes a big change.

My heart and prayers and love go out to everyone affected by this tragedy and all of the other tragedies that have occurred in this world.