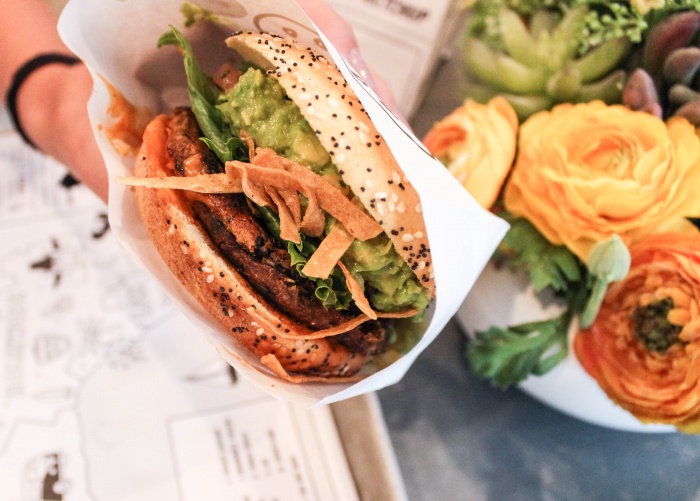 If you’ve been following my blog for awhile, you’ll know that I went to New York for the first time in my life last summer and had an amazing time. You’ll also know that I basically planned my entire trip around food. Since returning back to L.A., OF COURSE I’ve found out about a million more restaurants in NYC that I’m desperate to try, and I’m dying to go back to knock ’em off my list. One of those restaurants? by CHLOE. 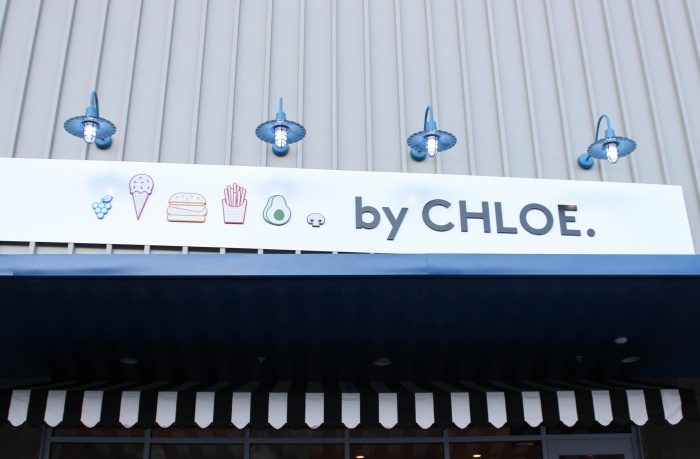 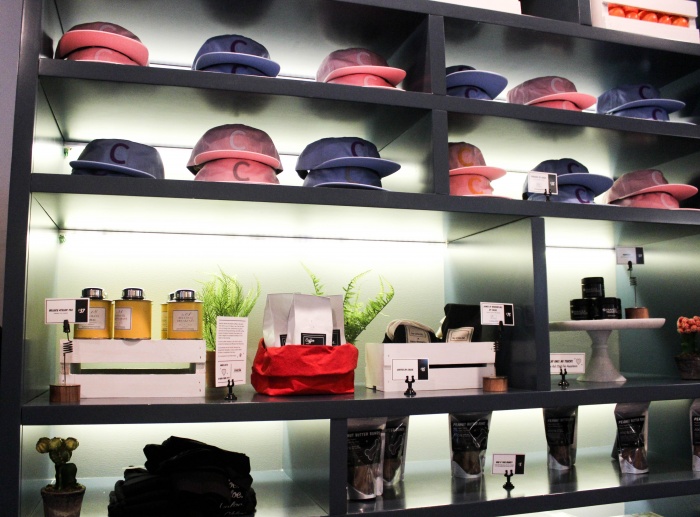 If you’ve never heard of by CHLOE., it kinda reminds me of a diner for healthy people. Like a health freak’s burger shack, if that makes sense. Fast food for a health nut. You get the idea? The food is all vegan, plant-based, and kosher, and most of it is gluten-free. So we’re talkin’ plant-based burgers with GF buns and air-baked fries with “ketchup” that’s actually healthy. According to their website, “Our menu is free of meat, dairy and egg products and contains no saturated animal fats, cholesterol, artificial flavors, and/or preservatives.” HELL YES. If you have dietary restrictions, you’ll definitely appreciate this place. Do you know how hard it is to find gluten-free, dairy-free burgers and fries that are actually delish? 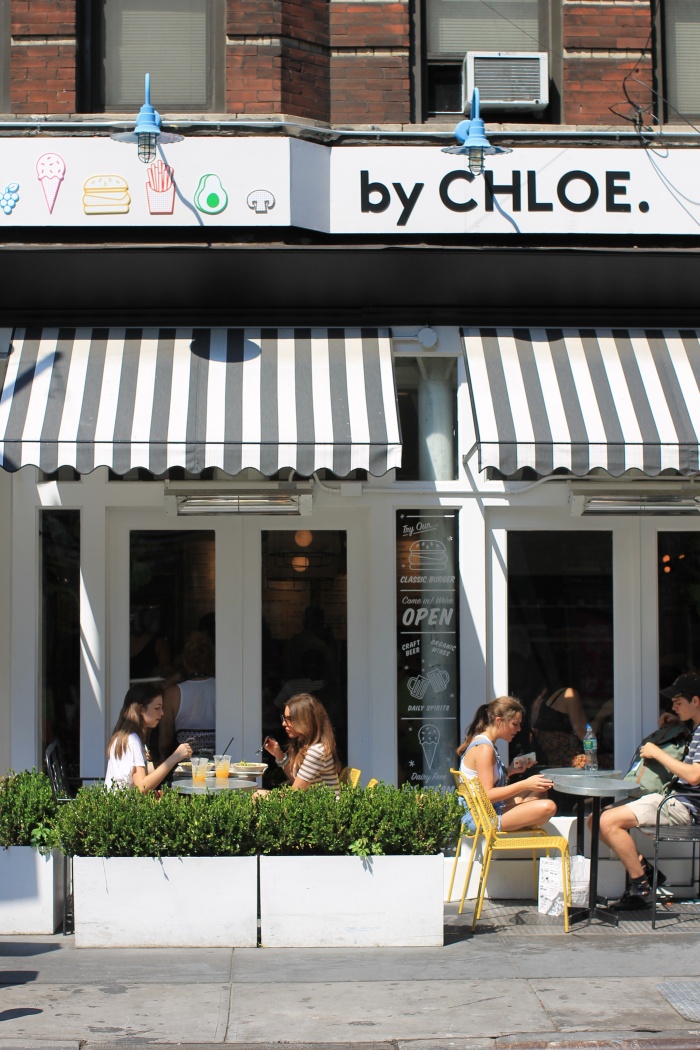 Pic of the NY location from mah girl Julia Dasen!

I finally got the chance to visit the L.A. location last weekend, and it did NOT disappoint. It’s in Silver Lake, so a bit out of the way for me, but so worth it. It’s also attached to a grocery store, 365 by Whole Foods (which is amazing, BTW). Kind of strange, but doesn’t really matter.

The restaurant is pretty small inside, but the decor is adorable. I was obsessed with the succulents everywhere and the cozy spinning chairs in the front. Most of the tables are for two people, but we snagged a larger table in the middle of the restaurant so there was plenty of room. 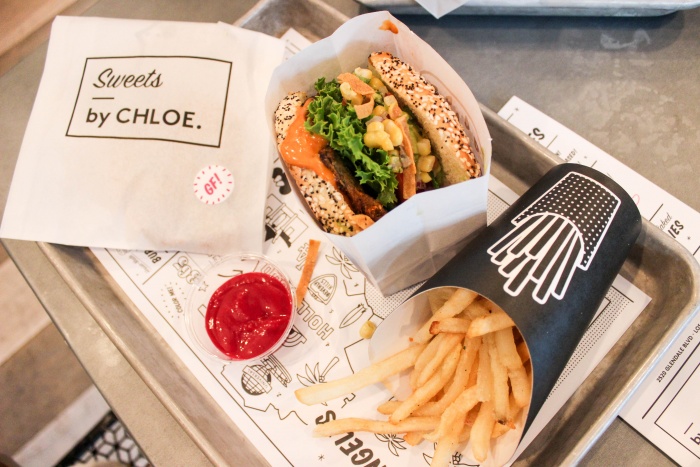 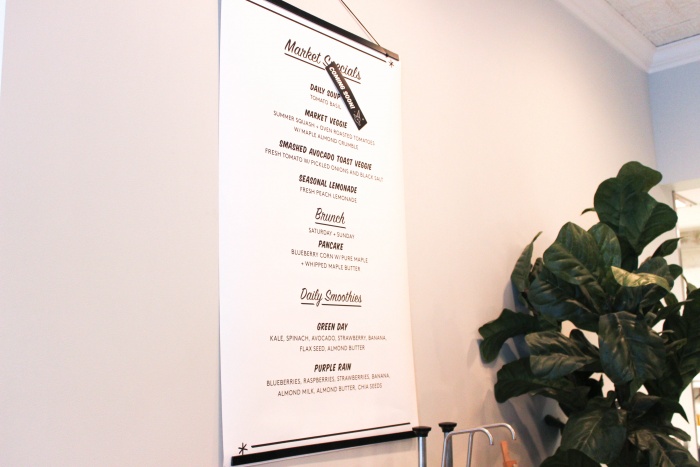 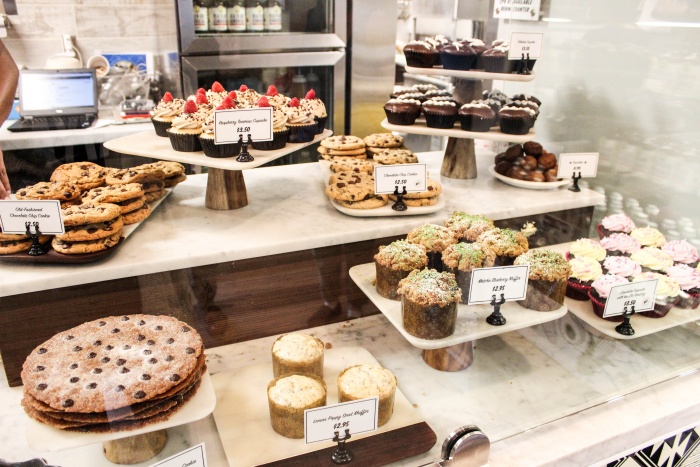 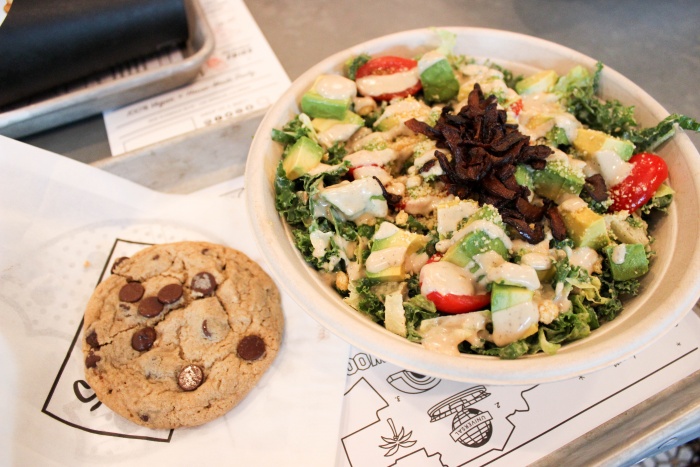 The whole menu looked amazing, but I had my eye on the Kale Caesar. I’m obsessed with caesar salad. If there’s ever a gluten-free, dairy-free caesar salad on a menu, I’m getting it. All of the salads at by CHLOE. can be made gluten-free, so YAY. Two of my friends got the Quinoa Taco salad, and both said it was utterly delicious. My Kale Caesar was BEYOND AMAZING. It was very different from any other GF/DF caesar I’ve ever had. The dressing was super thick and creamy, and it had a little kick to it. I usually hate anything spicy, but I was really into this. It was sassy. Also, the shitaake bacon was to die for and the almond parm was epic. The whole thing was just a really fabulous mixture of textures and flavors. I would definitely get it again. Actually, I’m kind of really craving another one right now. 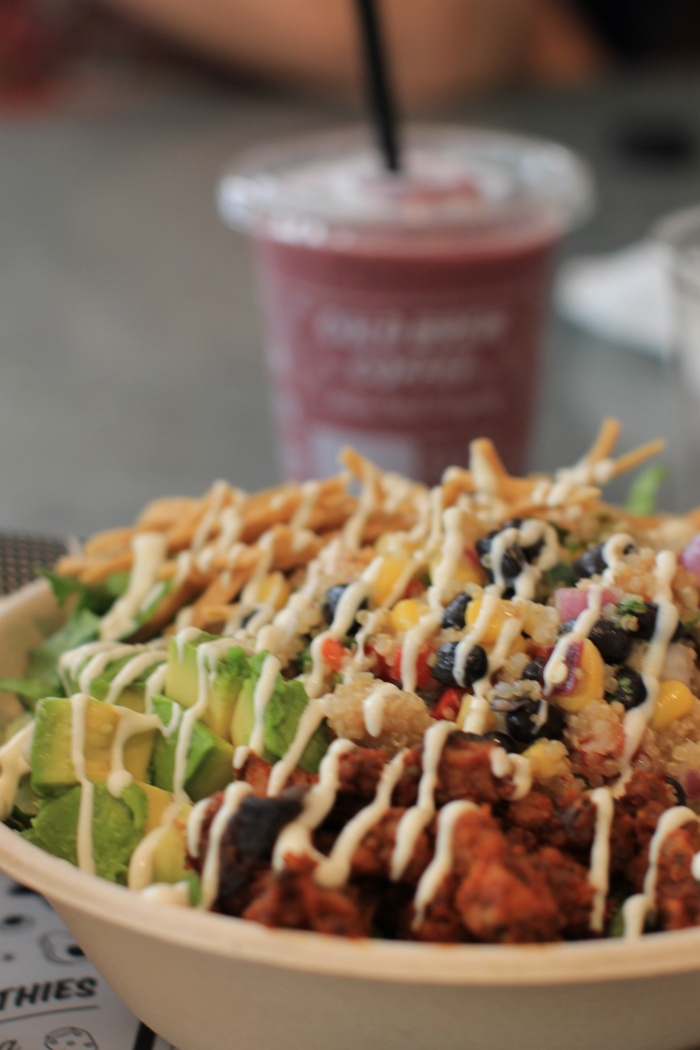 Two of my friends got the guac burger, and both were obsessed. Julia got the air-baked french fries, too, with some good ole’ beet ketchup. I tasted the beet ketchup and was thoroughly impressed. I asked for Julia’s opinion on the french fries because I didn’t try them, and she said that both the regular and sweet potato fries are perfection. (Update — later tried the fries… They’re incredible.) 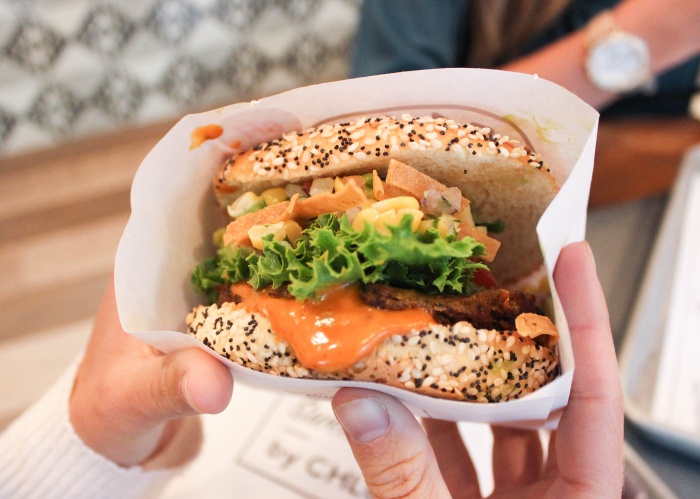 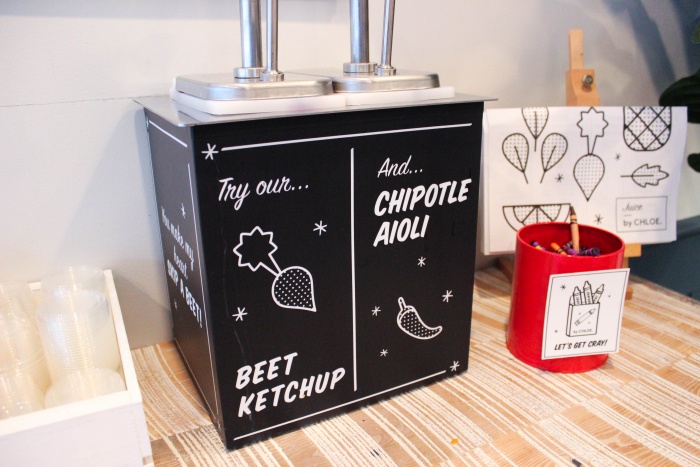 I got the gluten-free chocolate chip cookie because Julia had been hyping it up for weeks. I expected it to be really good, but I did not expect it to be this good. IT WAS UNBELIEVABLE. If you saw my reaction on Snapchat, you know what I mean. No words. I’m not one to obsess over a cookie, but this was by far the best chocolate chip cookie I have ever eaten in my entire life. It practically melted in my mouth, and it was the perfect texture and sweetness. Not too hard, not too soft. It tasted like warm brown sugar smothered with gooey chocolate chips. I was in heaven. 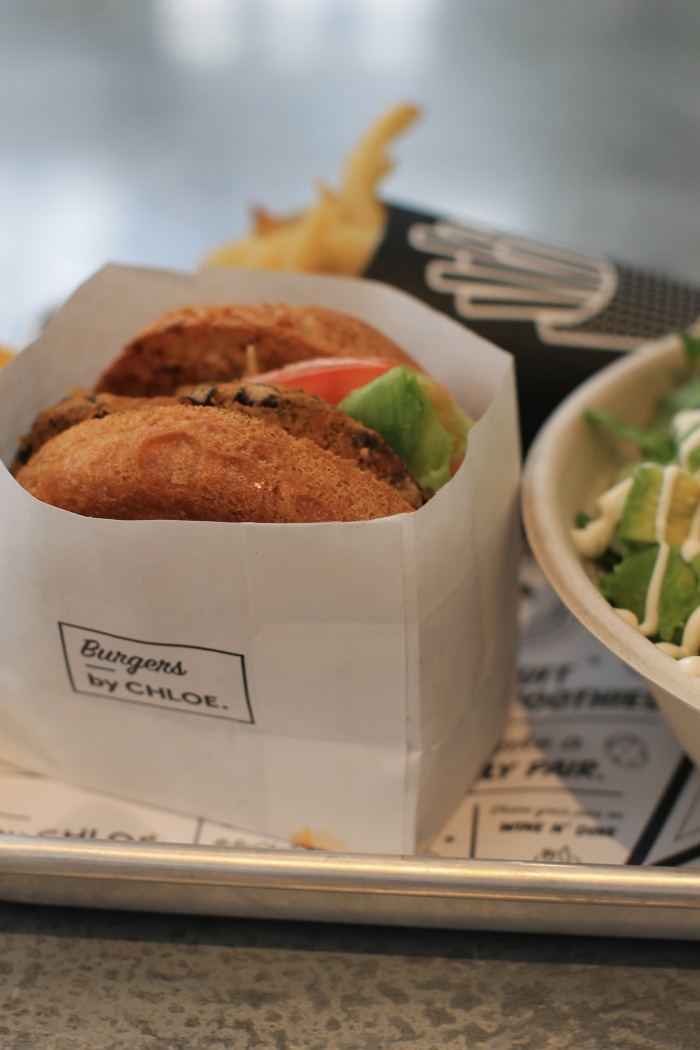 My other friend got the cinnamon espresso cookie, which was HUGE. It was bigger than her face. It was also SUPER thin. Like a sheet of paper. I couldn’t try it because GLUTEN, but she told us it reminded her of a lace cookie and that it was NOM. 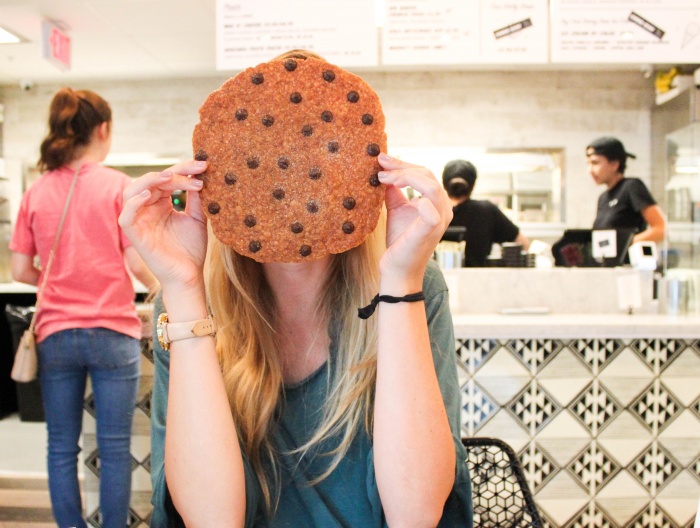 The outing was very successful, and I’m dying to go back and try some more things. All of the burgers look amazing, and I especially have my eye on the Pesto Meatball Sandwich. Their brunch menu also seems extremely promising. The smoothie bowl looks bomb. Julia tried the Purple Rain smoothie in New York and told us it was super yummy, and the Green Day smoothie also looks fab. I also reallllllly want to try the kale artichoke dip next time. by CHLOE. also sells really cute dog treats and classy baseball caps if you want some swag. I don’t have a dog, so… 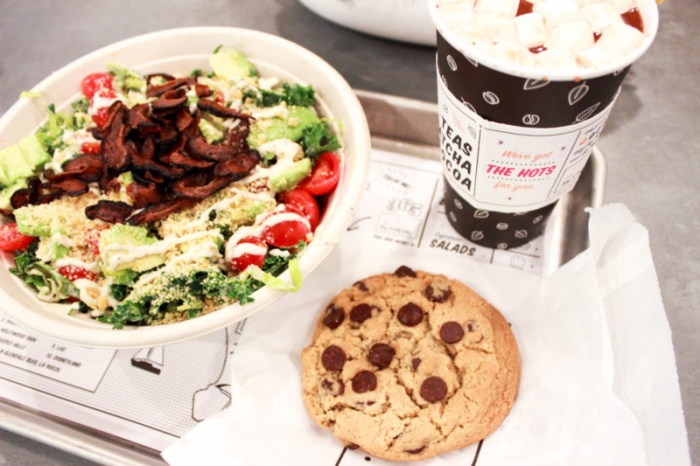 Since the trip described above, I’ve been back to by Chloe. quite a few times, so I wanted to update you on what you need to get! First of all, no matter how many times I get that GF chocolate chip cookie, I’m stunned. It is hands-down the best cookie I’ve ever tasted. 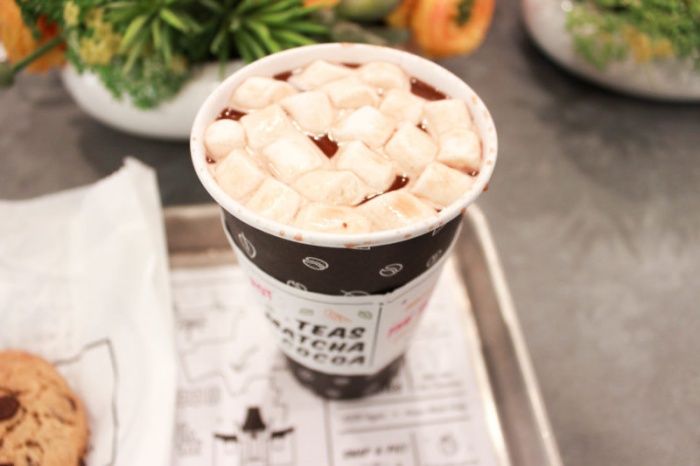 They also have a yummy gluten-free, dairy-free hot chocolate! The marshmallows are vegan and GF, and the hot chocolate uses almond milk as a base. The twist, though, is that they add PEANUT BUTTER to their hot chocolate. Very creative! It’s very rich, but if you’re a chocolate lover, you’ll really enjoy it. 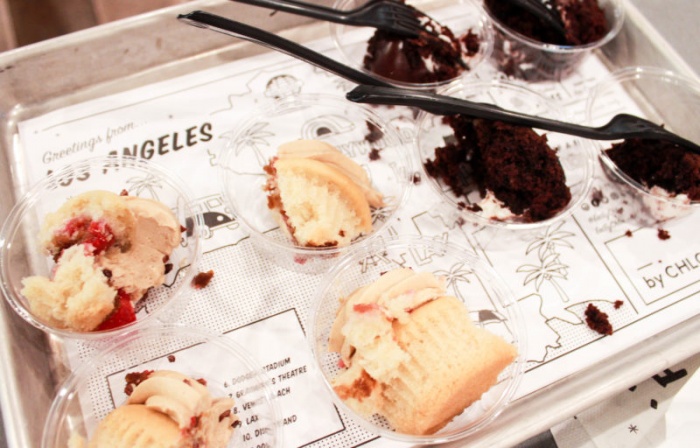 The wonderful employees at by Chloe. let us sample the cupcakes, so I had my friends taste the gluten-containing cupcakes for me. They were split on which cupcake was the best, but they all agreed that all of them were outta this world. That chocolate cupcake is as close to a healthy Hostess cupcake as you’re gonna get! One of my roommates was obsessed with that one, and the other was obsessed with the raspberry tiramisu. Clearly, you’ll be happy either way. 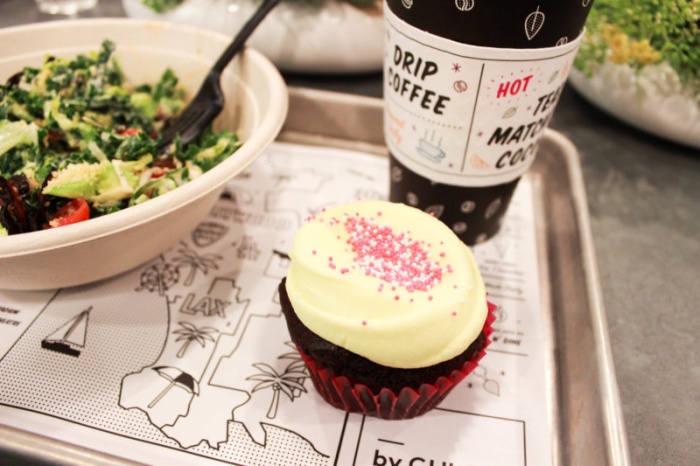 I went for the chocolate cupcake with vanilla frosting, which is their only GF cupcake. To be honest I don’t usually like cupcakes, but I love this one! The frosting doesn’t taste artificial, and the cupcake isn’t too sweet. It’s thick and dense, like true cake, and it’s not sickening like most commercial cupcakes. The perfect amount of sugar. Usually, frosting is not my thing, but I adore this frosting! 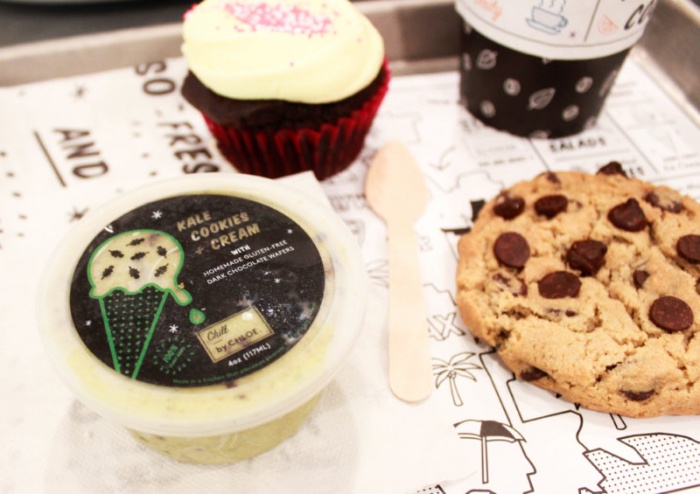 Finally, ice cream! Their ice cream flavors are extremely unique, to say the least. Their two gluten-free flavors are Kale Cookies + Cream and Salted Peanut Butter with Homemade Jelly. The other vegan flavors (which aren’t gluten-free) are Raspberry + Cream, Chocolate Chocolate, and Coffee By Chloe. I went for the Kale Cookies and Cream, and it was delicious. Super creamy, like regular ice cream, and it really did taste like cookies and cream. It doesn’t taste like kale – don’t let the green throw you off. I would highly recommend it and would totally get it again. I made an ice cream sandwich with the GF chocolate chip cookie and the ice cream, and it was AMAZING. Do it. 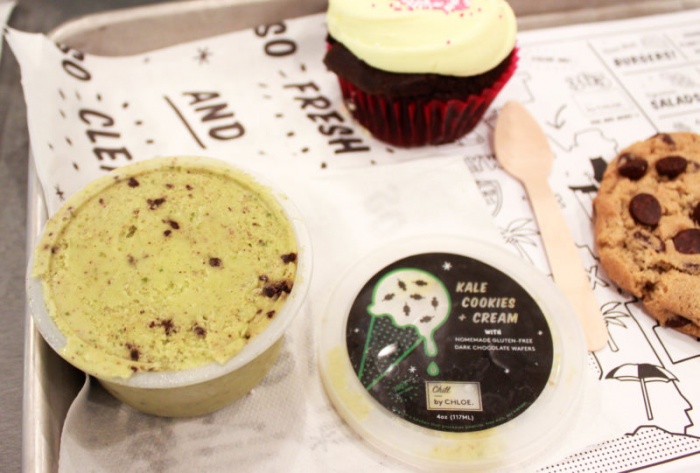 Although I haven’t personally tried them, friends who I’ve been to the restaurant with reported on the following: the cinnamon roll is amazing, the mac and cheese and the avocado pesto pasta are rich and delicious, and the quinoa taco salad is killer. You also need to try the beet ketchup – it’s so unique and delicious, and I can attest to that. To be honest, I’ve never heard anyone say they didn’t like something from by Chloe! 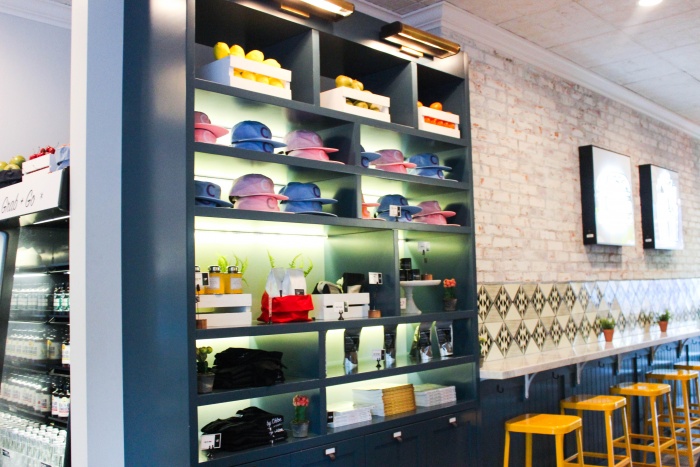 I am beyond impressed with by CHLOE. Def worth the hour drive (thanks L.A. traffic), and I would highly recommend. It’s casual, cute, delicious, and a great place for everyone – whether or not you’re vegan or have other dietary restrictions. This is the kind of place I would take my friends and family who eat junk food because I know they will love it, even though it’s healthy. I’m having withdrawals from that chocolate chip cookie, BTW. Can we petition to get this on Postmates? 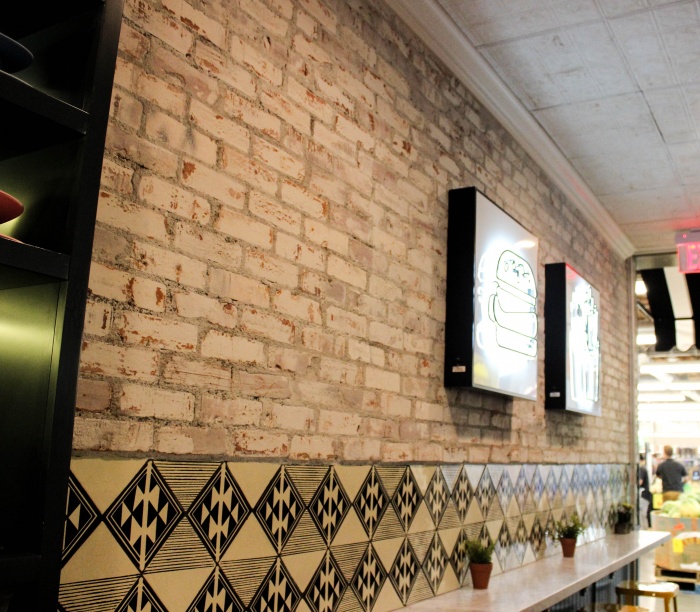 Anyone else been to by CHLOE.?! What’d you get?! 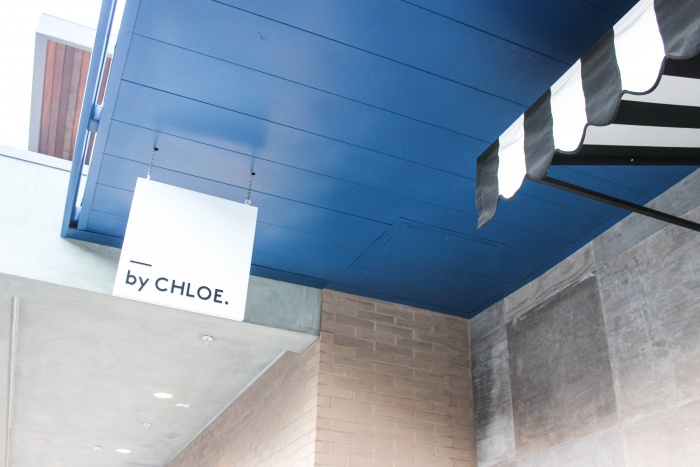