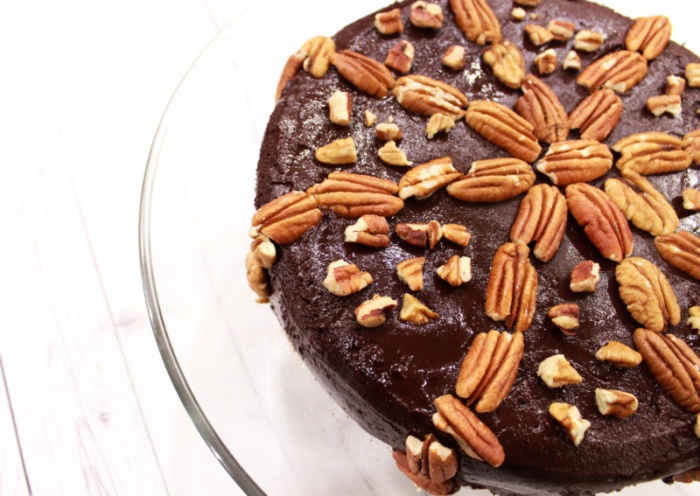 I was almost ready to tap out and officially take a break until after Christmas, but then I realized that one of you might want to make this glorious cake for your holiday festivities! I’m definitely a planner, so I’ve been planning out my Christmas recipes all week long. So many decisions to make! Do I want chocolate? Do I want something fruity? Do I want a pudding? A cake? Cookies? Brownies? 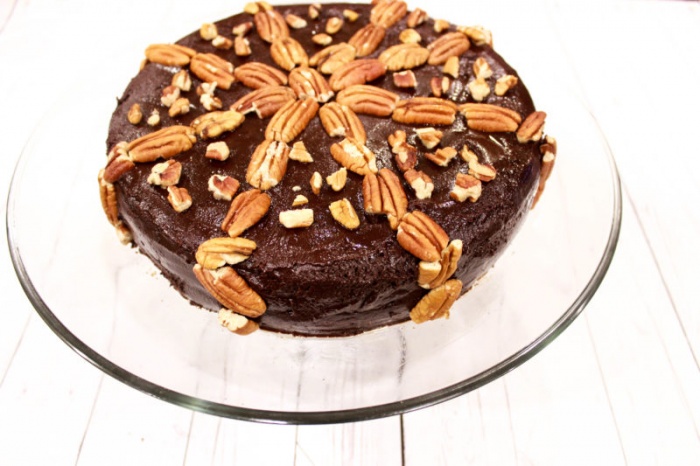 I’m excited to show you guys what I end up making. We’ll see if it works out. In the meantime, though, I would highly suggest baking this dark chocolate fudge pecan cake. 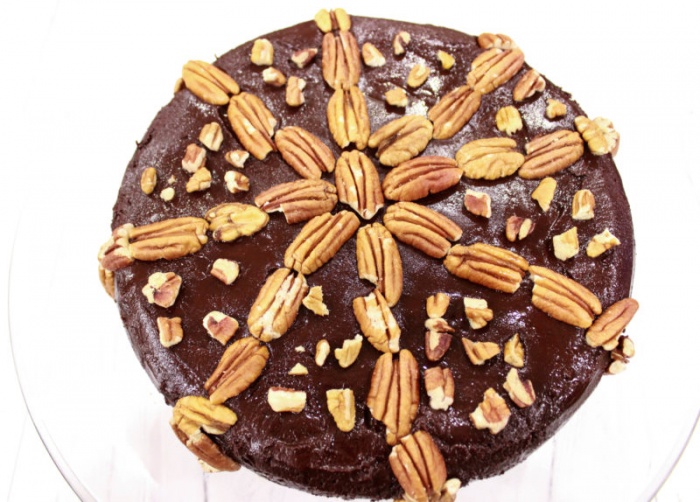 I made a chocolate cake similar to this last year that was to die for, and I wanted to recreate it. This time, though, I wanted it to be fudgier and even more chocolate-y. (Are those words? Don’t care.) Dark chocolate, to be specific. I also wanted to swap out the frosting. I’m really picky about frosting. I think that most frostings are gross. This one is more like a ganache, which is much more up my alley. It’s thin, rich, and definitely doesn’t taste artificial. 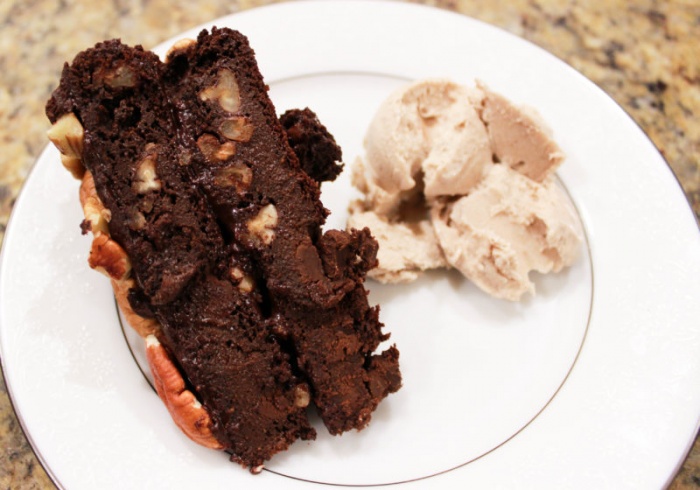 I’ve also been eyeing a few chocolate pecan pie recipes that were floating around during Thanksgiving, but as I’ve said before, I don’t really like pie. Pecan pie is my mom’s favorite, though, so I wanted to make something that both of us would enjoy. A chocolate pecan cake seemed like the perfect compromise. 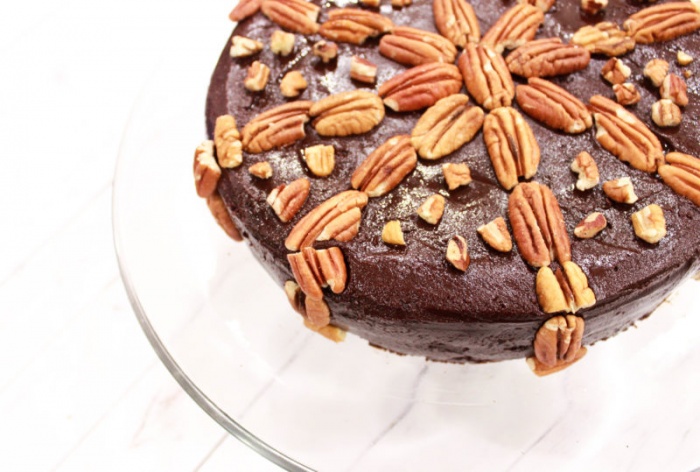 It took me many attempts to perfect this recipe. I was so determined to make it extra fudgey and rich that I went a little too overboard. The ingredients that make cakes “fudgey” are also “heavy” ingredients, so my cakes just kept falling apart. It still tasted incredible, though. Like a cake brownie. My friend and I put the broken cake in a bowl, topped it with ice cream, and ate it with a spoon. NO FOOD LEFT BEHIND. 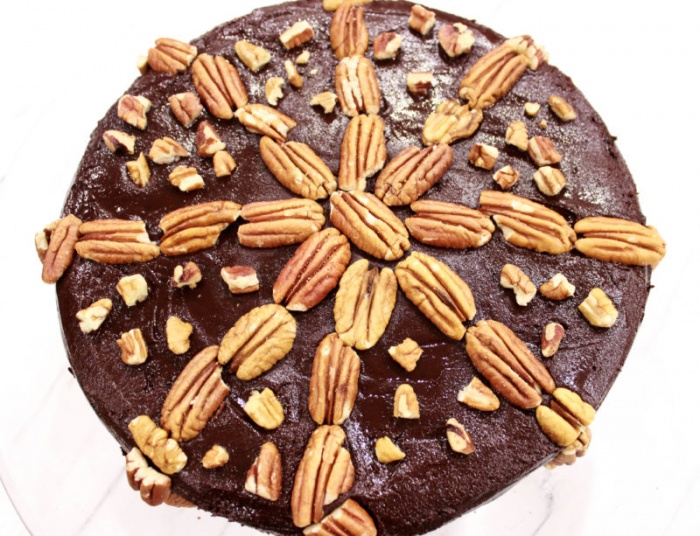 Anyways, I spent all day making different versions of this cake, and I finally got the recipe right at around midnight that night. Talk about pushing it to the last second. The sense of accomplishment… I can’t even tell you. 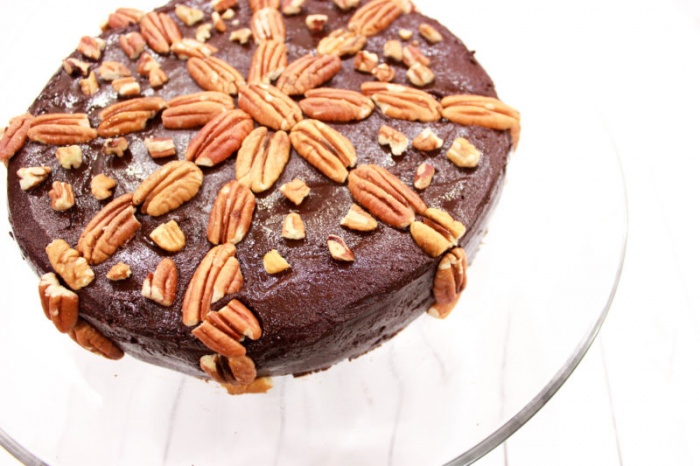 Even though the recipe development was a bit of a challenge, I promise you that it’s very simple and easy to make this cake. All you need is a big bowl for the cake and a food processor for the frosting. It’s probably better that it requires two things instead of one – you get to lick the chocolate remnants twice. 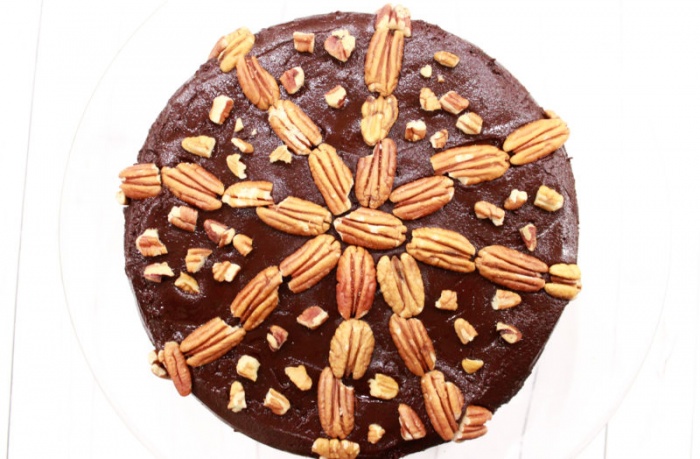 This cake is very rich. If you’re not a chocolate lover, you might wanna stay away from this one. The pecans, however, really help to balance out the dense chocolate flavor. You can, of course, make adjustments to this if you want. If it’s too much chocolate for you, you could leave out the dark chocolate chips. (Yep, there are dark chocolate chips in this bad boy.) If you don’t like pecans, you can definitely leave those out as well and just make it a dark chocolate fudge cake. Also, feel free to cut the recipe in half and make a one layer, shorter cake. This cake doesn’t really need to be so tall…but I wanted it to be. 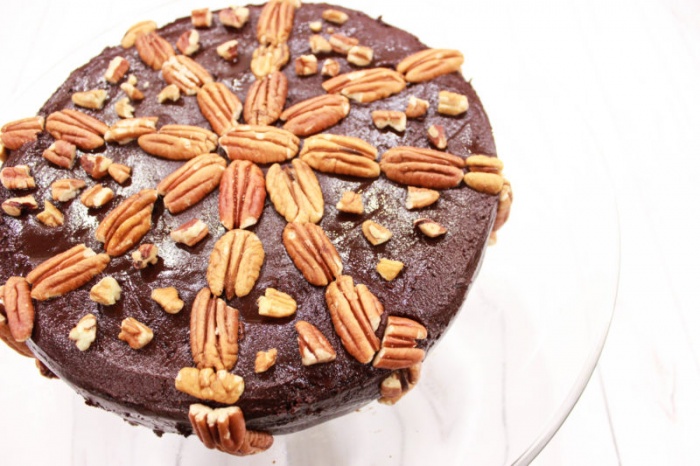 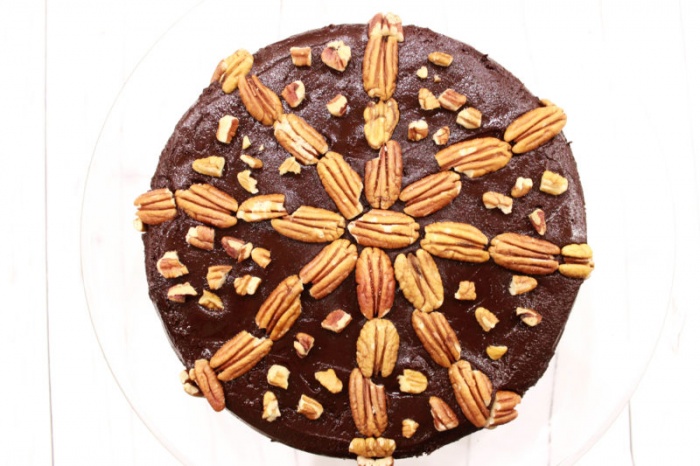 As I’ve said before, I’m still trying to figure out what a “Christmassy” dessert is. I think this definitely qualifies, though. There’s a chocolate cake at our family Christmas party every year, so I associate it with the holiday season. Nuts are also a Christmas thing, in my opinion. Plus, this cake has an extravagant look to it that will make your family members think you’re fancy, even when you’re not. You can also obviously make this cake at any time of year. Birthday cake, anyone? 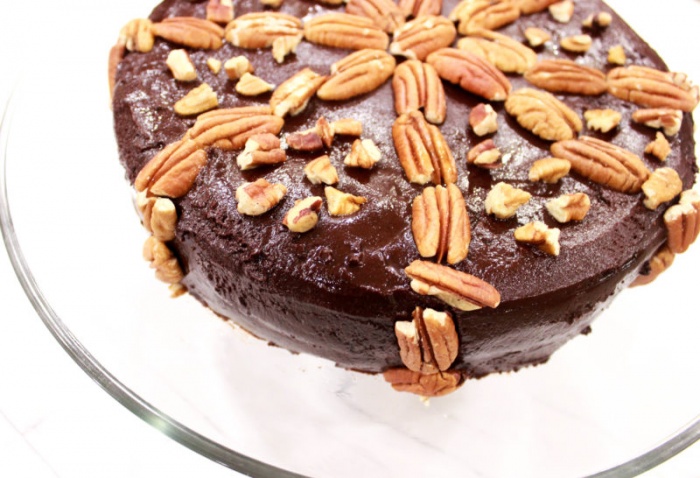 I can also basically guarantee that no one will know this is a healthified cake unless you tell them it is. Part of what made this recipe so difficult for me to perfect was the fact that I was determined to make it both gluten-free and vegan. It’s a lot easier to do one or the other. I DID IT, THOUGH. Now everyone can enjoy a slice of chocolate fudge heaven. 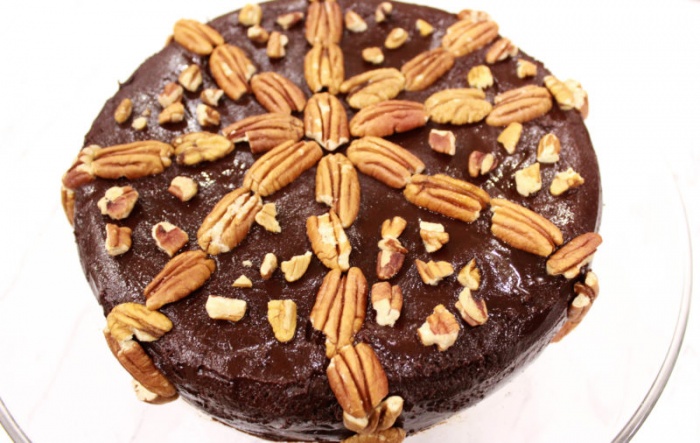 I’m pretty obsessed with this, to say the least. There are so many different textures and flavors going on, there’s no way you won’t be satisfied. You’ve got the crunch of the pecans and dark chocolate chips. You’ve got the dense, rich, chocolate fudgey cake. Then there’s the silky smooth chocolate ganache running through the middle of the two layers. It’s a chocoholic’s dream. 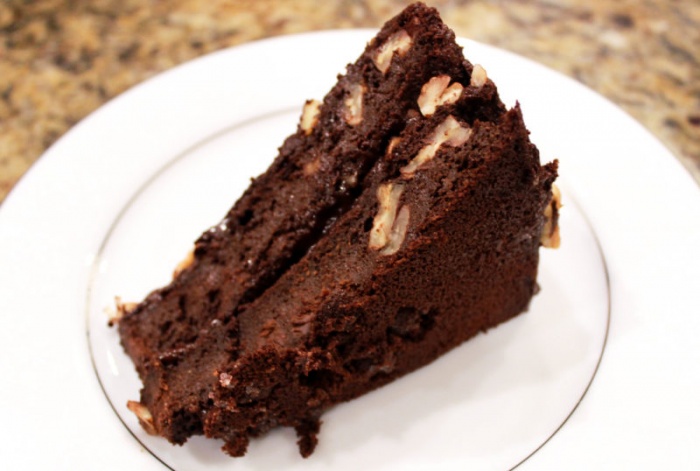 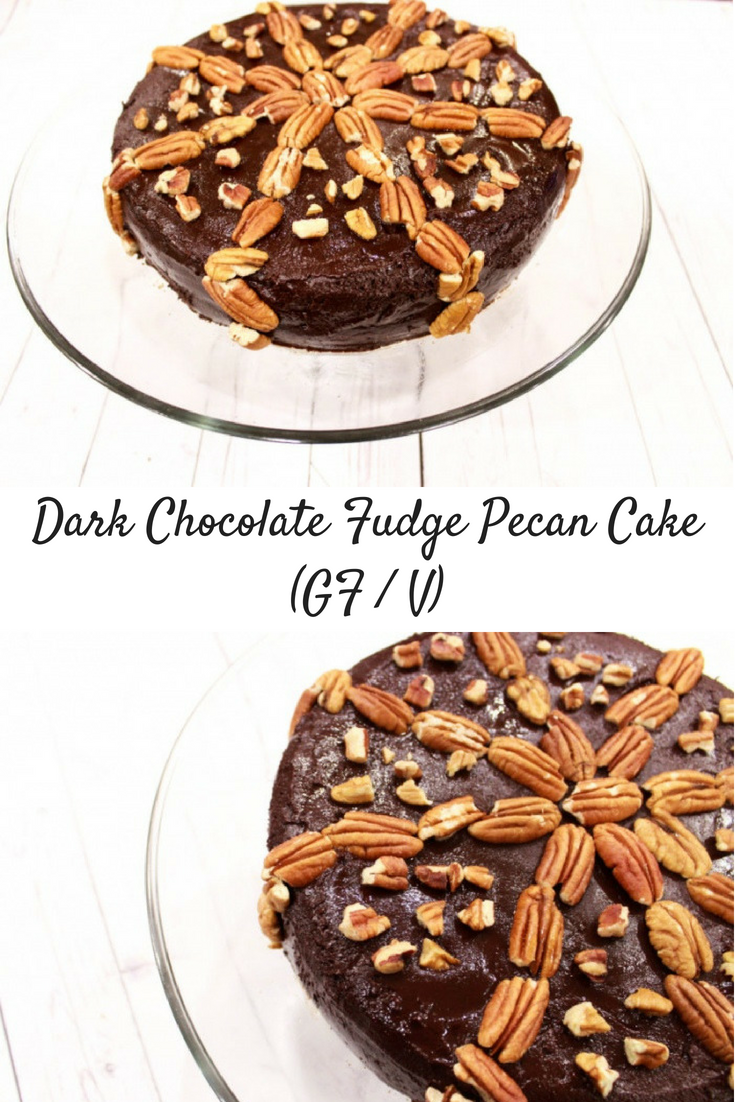 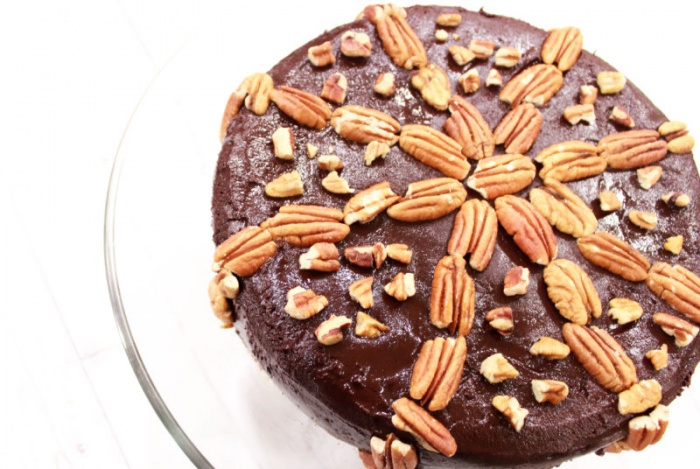 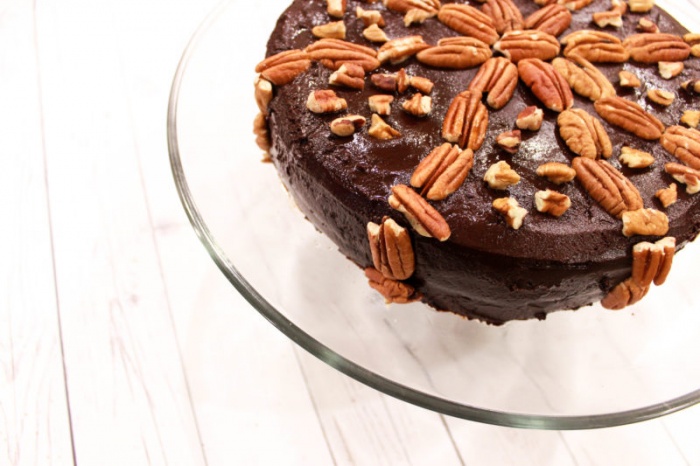 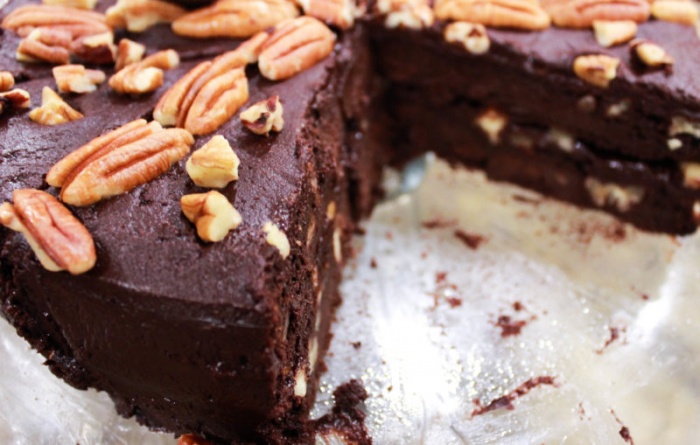 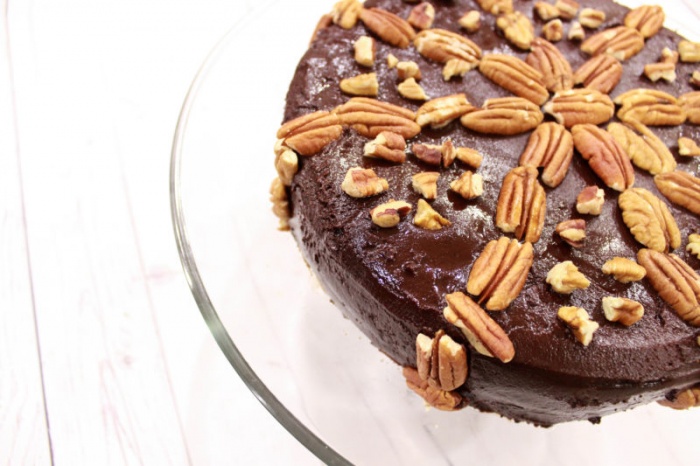 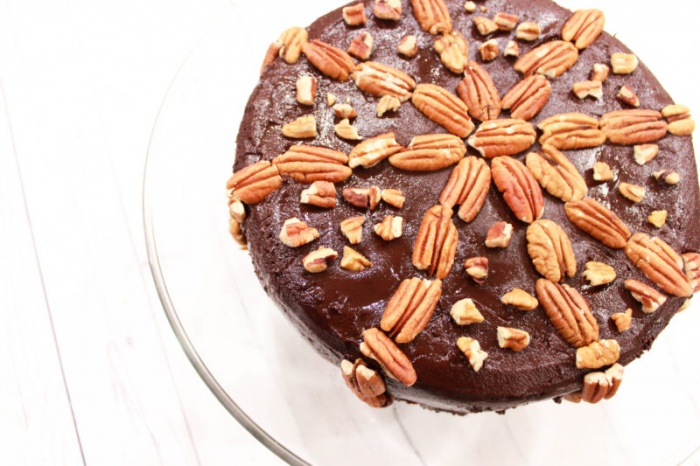 There you have it! A kickass dark chocolate fudge pecan cake that’ll leave you weak at the knees. I can definitely see this becoming my go-to cake recipe… 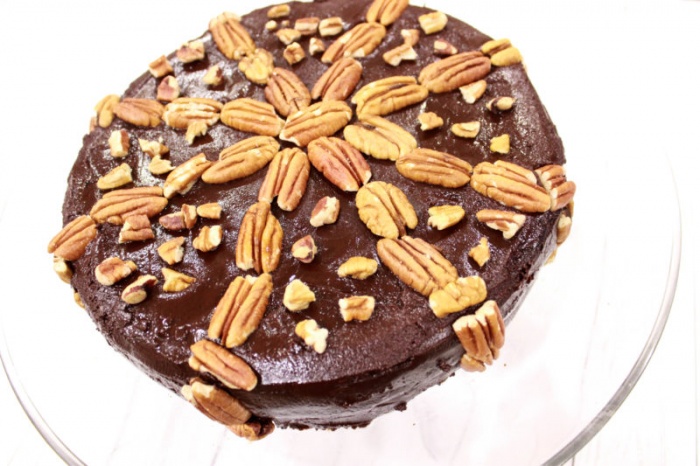 If you try it, let me know! Tag me in your pics! What’s your favorite Christmas dessert? 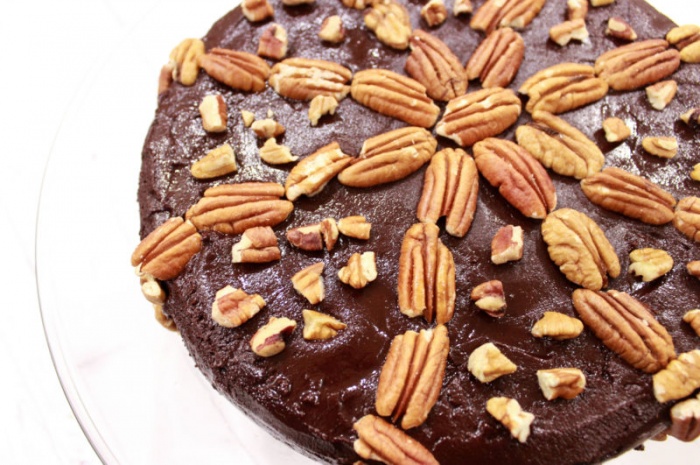