My Experience with Cryotherapy & Cryo Facials 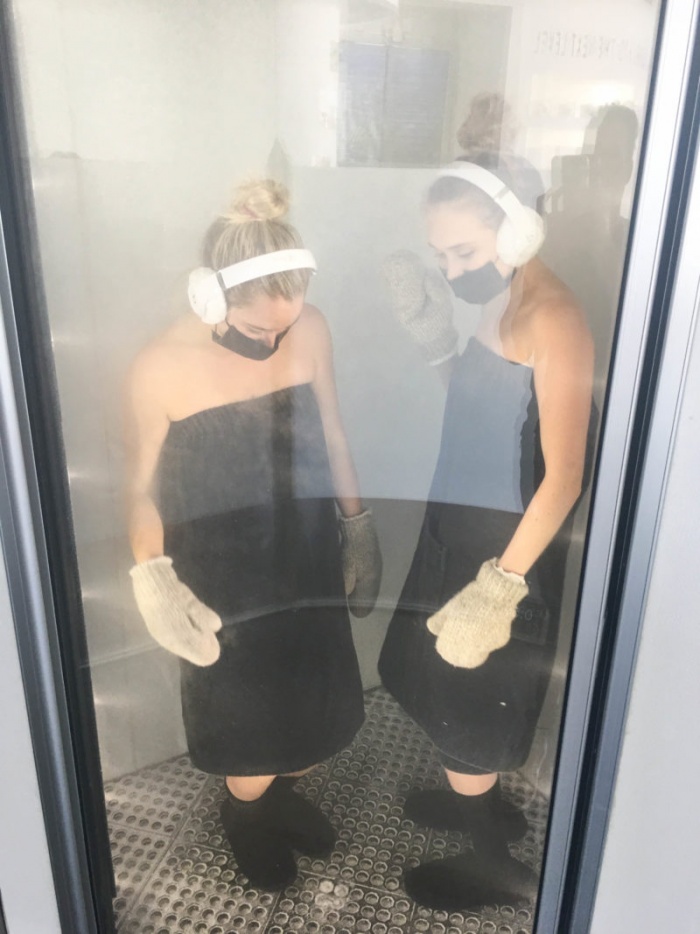 Cryotherapy has been the very cool thing to do lately (pun intended), and it seems to be popping up everywhere. I had my first cryotherapy session as a surprise birthday present from Jordan last week, and after posting about it on social media and in my birthday blog post, I received a ton of questions about cryo. What was it like? What are the benefits?! Is it torturous? 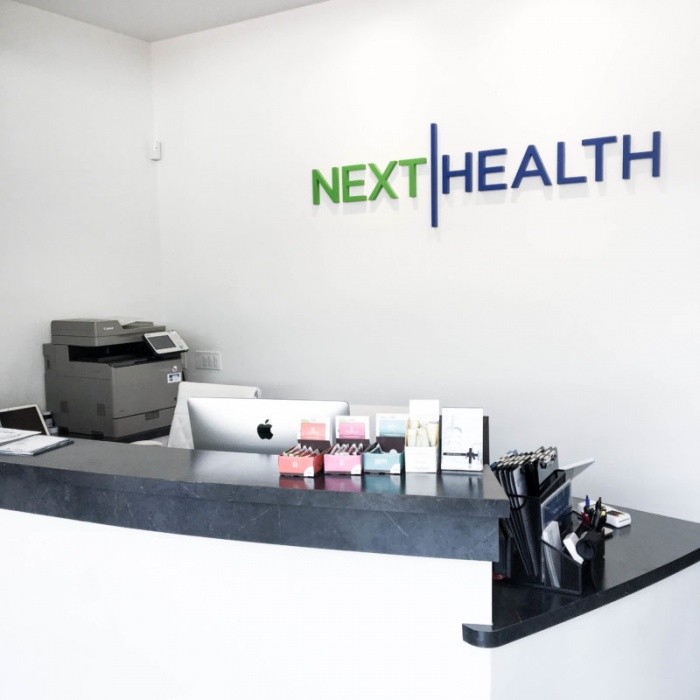 For anyone unfamiliar with cryotherapy, I wanted to do a quick little recap of my experience, what it is, my thoughts, etc.

Cryotherapy is, simply put, cold therapy. There are different types of cold therapy, and cold therapy has been used for a very long time for health/medical benefits. Think ice baths to soothe sore muscles – that’s one type of cold therapy that most of us are familiar with.

The cryotherapy I’m talking about in this post, though, is when you step into a freezing chamber where liquid nitrogen is sprayed into the air for a few minutes. It’s pretty chilly. 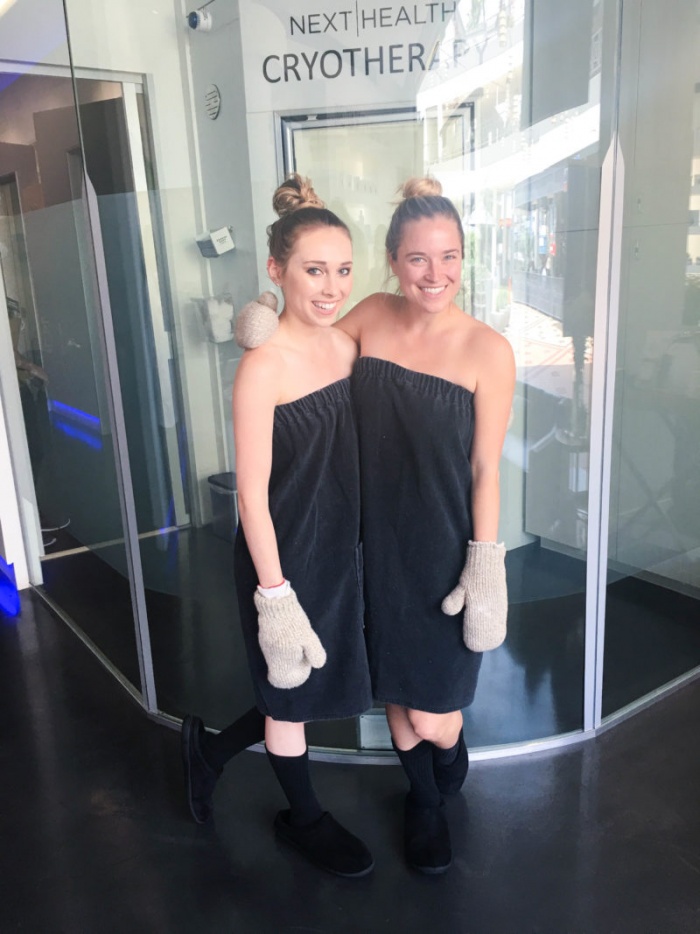 This type of cryotherapy has recently become quite popular in the U.S., probably because a lot of celebs post photos doing it. The chambers are also called “cold saunas,” and the technology came over here from Japan. Like I said, though, cold therapy in general has been used for hundreds of years. Cold therapy is used in surgeries (like in Grey’s Anatomy when they put organs on ice, LOL), helps athletes overcome soreness, reduces general inflammation, and more. Even though cold therapy, also called contrast therapy, has been around for centuries, the chamber is the most advanced way of doing it.

The chamber we went into at Next Health in West Hollywood was a full-body chamber that covered our heads, but most chambers only include the neck and below. You’ve probably seen photos of people with their heads sticking out of a big tube while they’re doing cryo. The chamber Jordan and I went into was below -150 degrees, but you can pick different “levels” of chill. 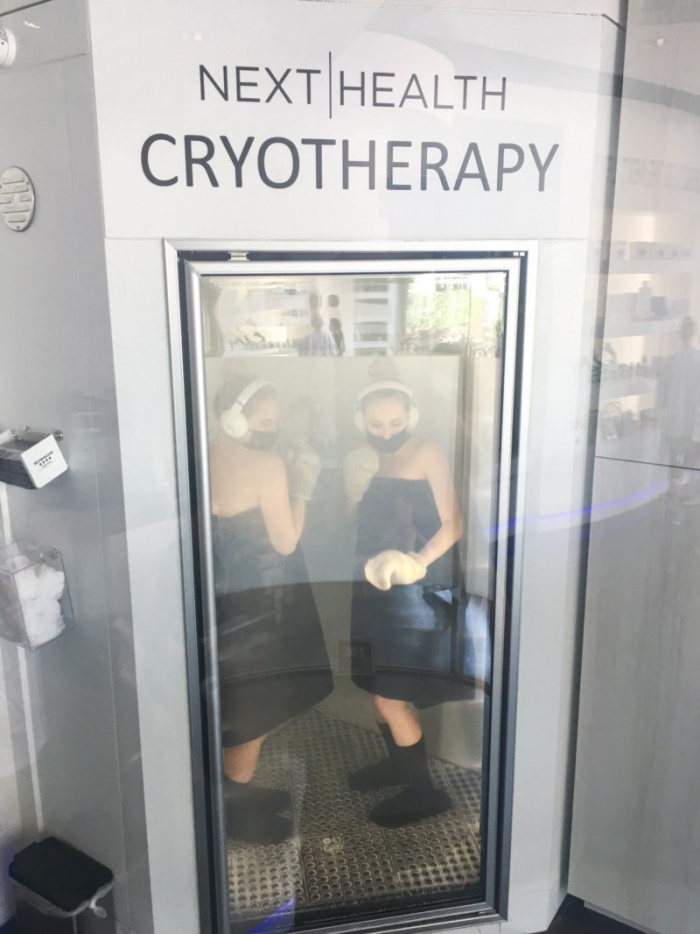 What are the actual benefits? Well, there many. Whole body cryotherapy was actually originally created for people with rheumatoid arthritis, because it’s the most effective way of taking inflammation out of the body. Besides getting rid of inflammation, cryotherapy increases blood flow and circulation, is great for muscle repair and recovery, accelerates the healing process of muscles by about 40%, boosts your immune system, improves your energy levels, and heightens your metabolism.

To me, the cognitive benefits are the most interesting part. When your body is exposed to that cold of a temperature, your brain release hormones – endorphins, serotonin, adrenaline – that make you feel like you could climb a mountain. You actually feel like you’re on top of the world, in terms of energy and mood. 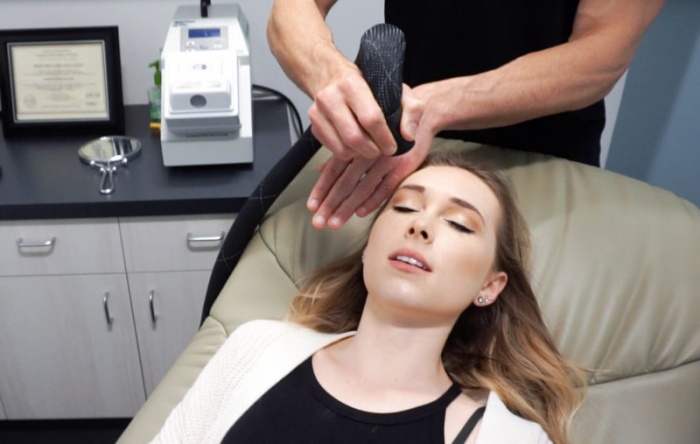 We also received cryo facials at Next Health – something I had never seen before. Basically, a tube blows out really cold air, -120 degrees, onto your face for a few minutes. The person holding the tube goes in circular motions, covering different parts of your face over the span of the whole facial. The point is to get the skin temperature to drop 30-40 degrees so the fluids vacate the area under the skin. When the cold pulls away, the healthy deoxygenated blood floods the area and improves skin complexion, accelerates the skin’s healing process, helps tighten the skin, helps with fine lines and wrinkles, and promotes collagen production. The body’s natural defense mechanism against cold is collagen production, and you know how I feel about collagen. 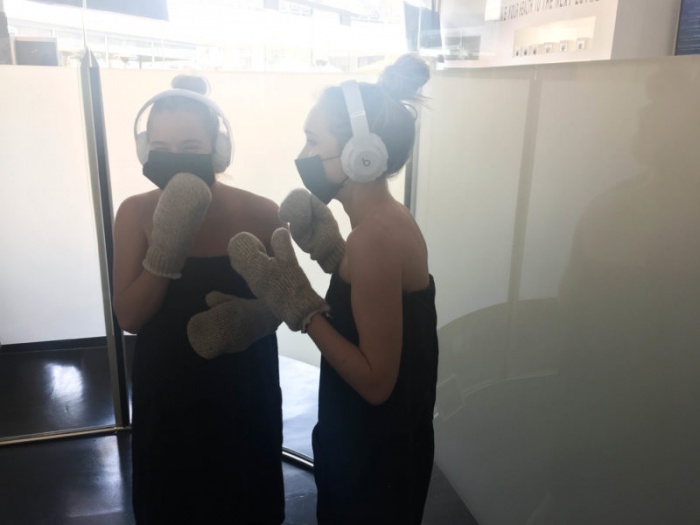 In terms of the actual experience, I was a huge fan. For the full-body cryotherapy, Jordan and I went into the chamber together, which made it much more bearable, for two reasons. First, you have a pal to freeze your butt off with/distract you. Second, two people means more body heat, so it’s not as cold. I also loved that they gave us Beats and we got to pick a song to jam out to during the cryo. That was reallllly helpful in terms of distraction. J picked a Rihanna song, so we just danced around the whole time. They also put a timer outside so we could see how long we had left in the chamber.

You basically wear a towel, socks, slippers, gloves, mittens, and a face mask. We stayed in the chamber for 3 minutes, and it was set to a “medium” temperature. So not the coldest possible, but cold. I honestly expected it to be torturous, but it wasn’t that bad. It was cold, yes, but mostly just like being outside on a really cold day. I could definitely handle it. If you live on the East Coast, you’ll have no problem. My eyelashes got frosted white and the hair on my arms was standing up straight, which really entertained me. I honestly don’t know if I could’ve handled the coldest temperature, but I would definitely be willing to try it out. I would probably start with a minute at the coldest temp, though, instead of three. 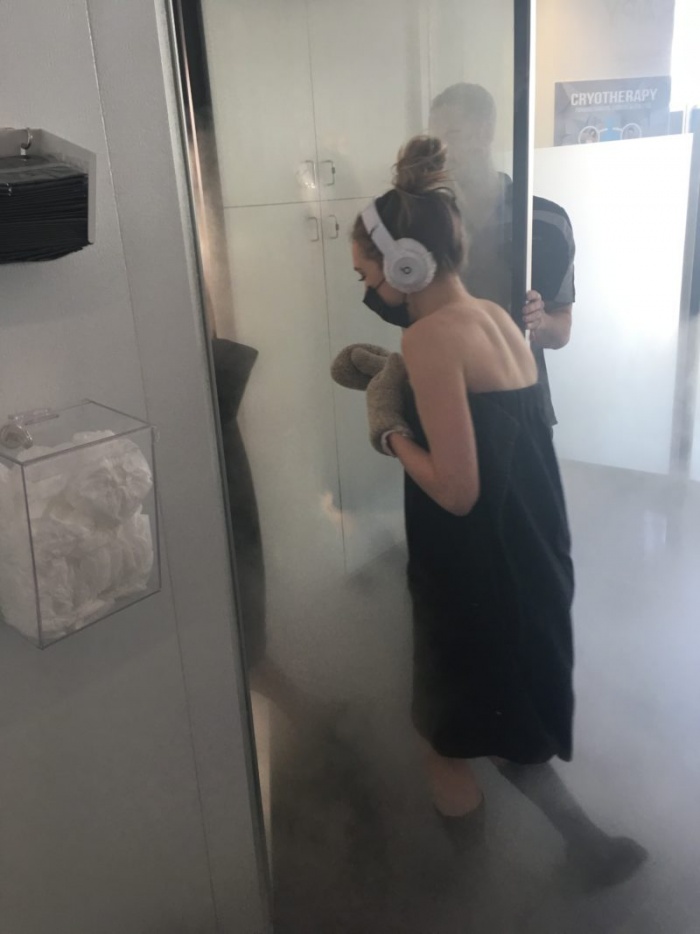 I was amazed at how incredible I felt afterward. I really did feel on top of the world. Jordan and I both went into it feeling pretty tired and sluggish. I could’ve used a caffeine boost. After, though, I felt like I had just been on a rollercoaster. The adrenaline was pumping. I couldn’t stop smiling, I felt like I had just downed a huge cup of matcha without the stomachache and the headache, and I felt an incredible kind of mental clarity. It was really strange. I felt great.

I also felt the effects on my actual body. As someone who works out a lot, I noticed how much better my body and muscles felt after the cryotherapy. It was like how you feel the day after a really good massage, except without the soreness. I used to do ice baths in high school, and this gave me the positive effects I used to get from those, without the dreadful ice.

I also loved the cryo facial. It was really relaxing. It feels like sticking your head out of a car window, without the headache, air pressure, and loss of saliva. Just imagine the feeling of cold air blowing on your face. The air is circling around, so it’s not blowing over your whole face at once. When it went over my nose and mouth, it was a little hard to breathe, but that ended in a second. I felt like the cryo facial reduced redness in my face, but who knows if that was real or not. I was wearing makeup, too, so probably not a totally accurate measure. (It was my birthday and this was a surprise!) 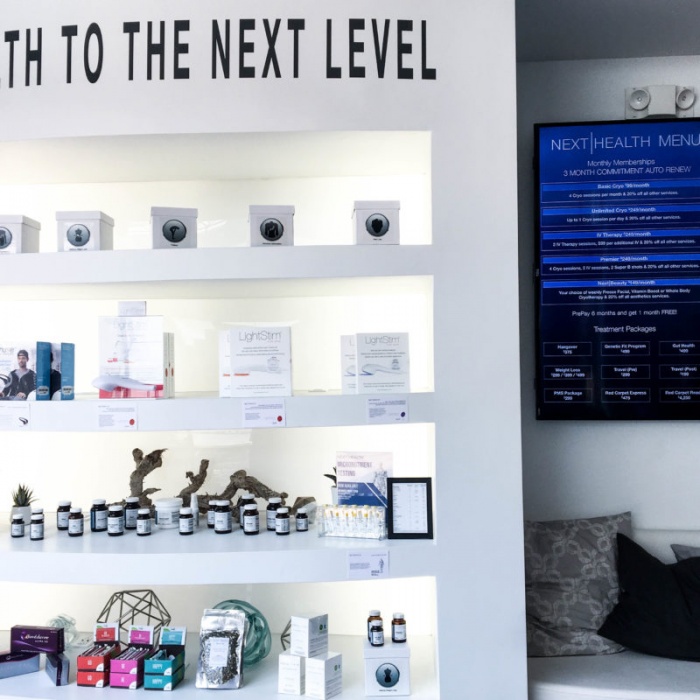 Overall, I had a great time getting cryo and I would definitely love to go again. Do I think it’s something necessary for health and wellness? Of course not. But if you’re interested and have the opportunity and money, try it out! Don’t be afraid! You’ll feel great afterwards, and you don’t have to go to the most extreme temperature to start out with. If I could only pick one or the other, I would get the whole body cryo over the facial. Loved both, but why limit the benefits to just my face?!

Have you tried cryotherapy? I’d love to hear about your experience!