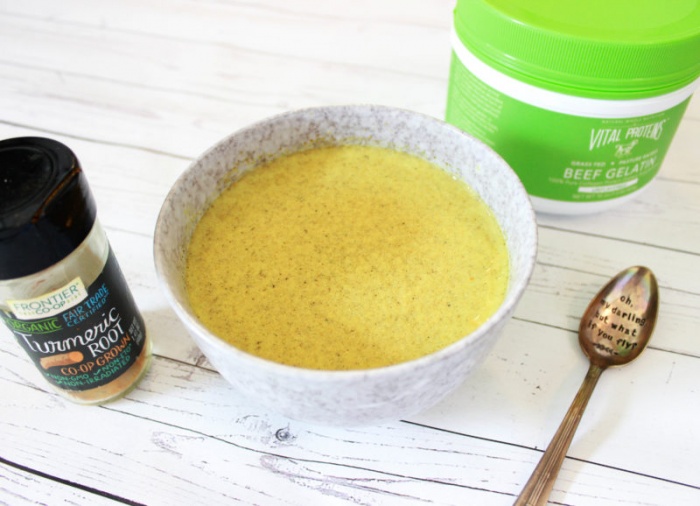 Good ole’ golden milk. It’s all over the Internet. I don’t mean to sound super cool or anything, buuuut I’ve been drinking golden milk for quite a few years now. Pre-popularity. It’s such a basic recipe that I never thought to even put it on the blog, but I recently came up with a new twist on the old classic. Golden. Milk. Pudding.

As much as I love golden milk, I much prefer to eat something rather than drink something. I like substance. There’s also something really soothing about a pudding or a Jell-O. It brings me back to my childhood when my mom would make me custard or strawberry Jell-O as a treat, especially when I was sick. But this time, it’s actually healthy.

The beauty of this recipe is that you can make it either a pudding or a Jell-O by using the same ingredients – you just gotta adjust the measurements a tad. I love to make it both ways, depending on my mood.

Let’s get back to golden milk for a second. Maybe you haven’t tried it. Maybe you haven’t even heard of it. In case you haven’t, I’ll tell ya a little bit about this magical potion. Golden milk has been used for a loooong time as a healing remedy in Ayurvedic medicine, especially when it comes to digestion, immunity, and liver function. It’s also been used as a folk remedy for colds, headaches, sore throats, and depression.  The “gold” in golden milk comes from turmeric, which contains circumin, a polyphenol with a ton of health benefits. Two of my favorites? Circumin helps reduce inflammation and eliminate toxins in the body. Obviously, my favorite part of golden milk is its digestive benefits. You know me and digestive health… It’s my number one fave. 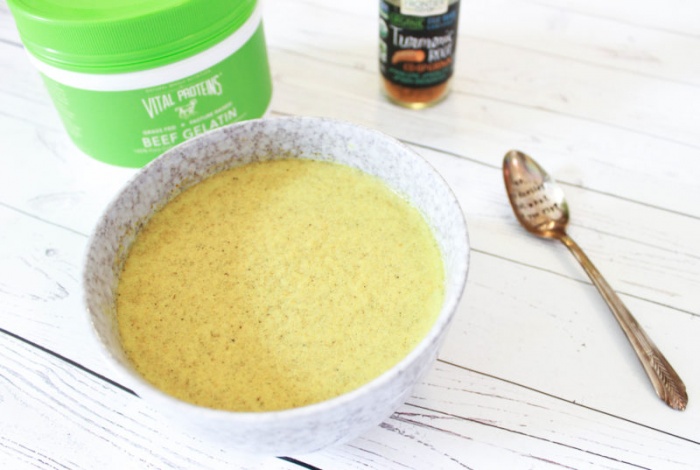 In general, golden milk is very relaxing and comforting. I love having golden milk before bed as a way to calm myself down and soothe my stomach. What’s in it, anyways? There are different variations, but mainly – coconut milk, turmeric, ginger, pepper, vanilla, and cinnamon. The oddball is pepper, I know. But you need the pepper! When you add black pepper to a mixture that contains turmeric, the body absorbs the turmeric 2000% better. WHOA. 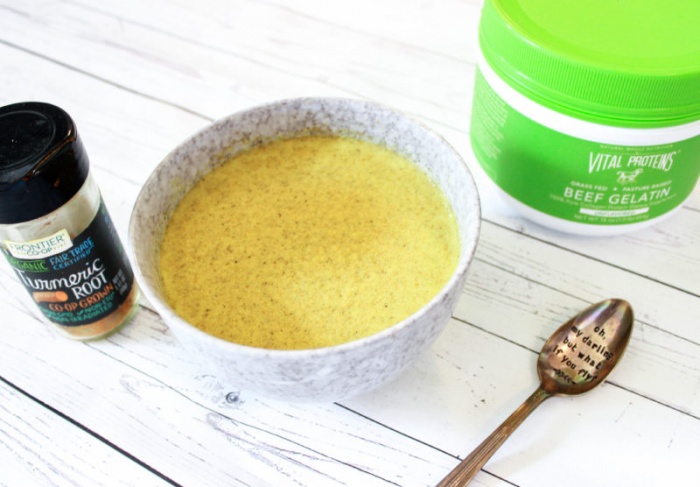 So how do you turn regular golden milk into golden milk PUDDING or golden milk JELL-O?! Vital Proteins Beef Gelatin, of course! I’ve briefly discussed the health benefits of collagen before, but I’ll review them again. First of all, the collagen protein in beef gelatin is a powerhouse when it comes to digestive improvements. Gelatin lines the GI tract to help enhance the nutrients absorbed from your food and improve your overall gut health. That’s key if you want to heal leaky gut. Adding gelatin to the already powerful benefits of turmeric makes this recipe a GUT HEALTH DREAM. The collagen in gelatin also helps strengthen bones, reduce inflammation, improve sleep quality, and enhance the health of your hair, skin, and nails. So it’s a beauty food, too! Plus, it contains 17 grams of protein per serving. Hello, muscles!

Vital Proteins Beef Gelatin is Paleo, gluten-free, sugar-free, and hormone-free. And Whole 30 approved! In fact, this entire recipe is. It’s also AIP–friendly. You can choose to add sweetener if you want, but I prefer not to. I think it’s just as good without it.

This recipe is full of healthy fats from the coconut milk and lots of protein from the gelatin, so it’ll fill you up! This is also a great recipe to meal prep ahead of time. It only takes a few minutes, and the next day you can just grab it and go. I’ve been having this as a snack nonstop for the past few weeks…and I’m definitely not getting tired of it. 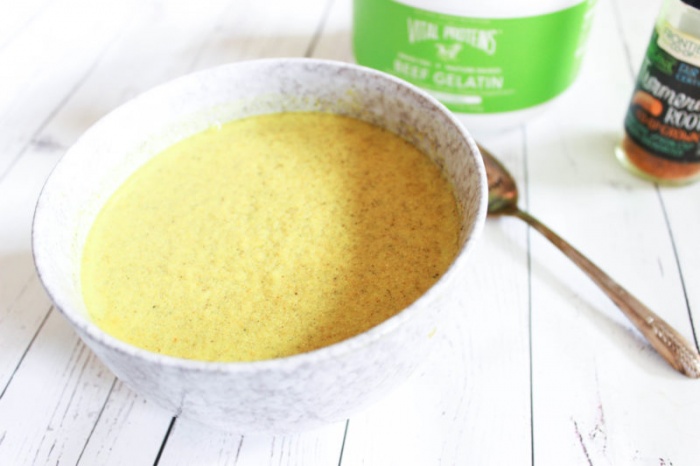 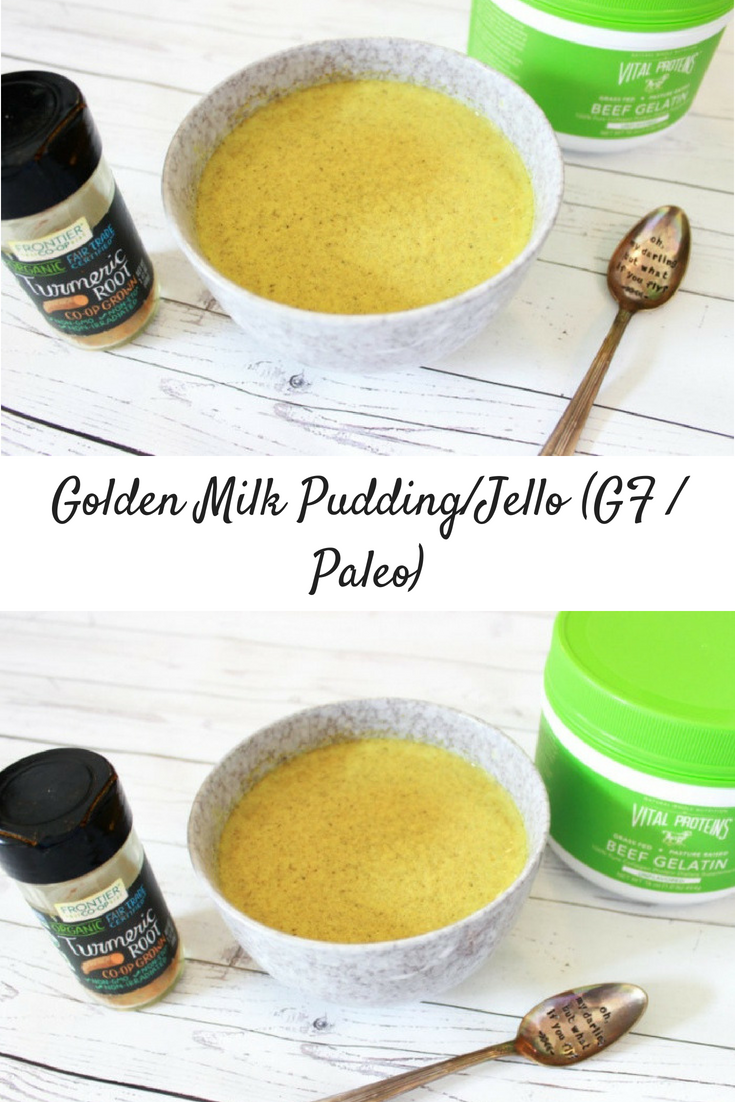 Time: 5-10 minutes, plus refrigeration for a few hours/overnight 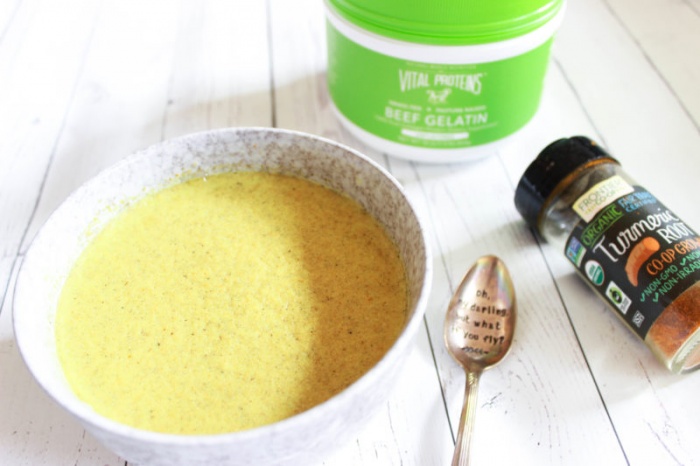