How to Know If You’ve Met Your Twin Flame 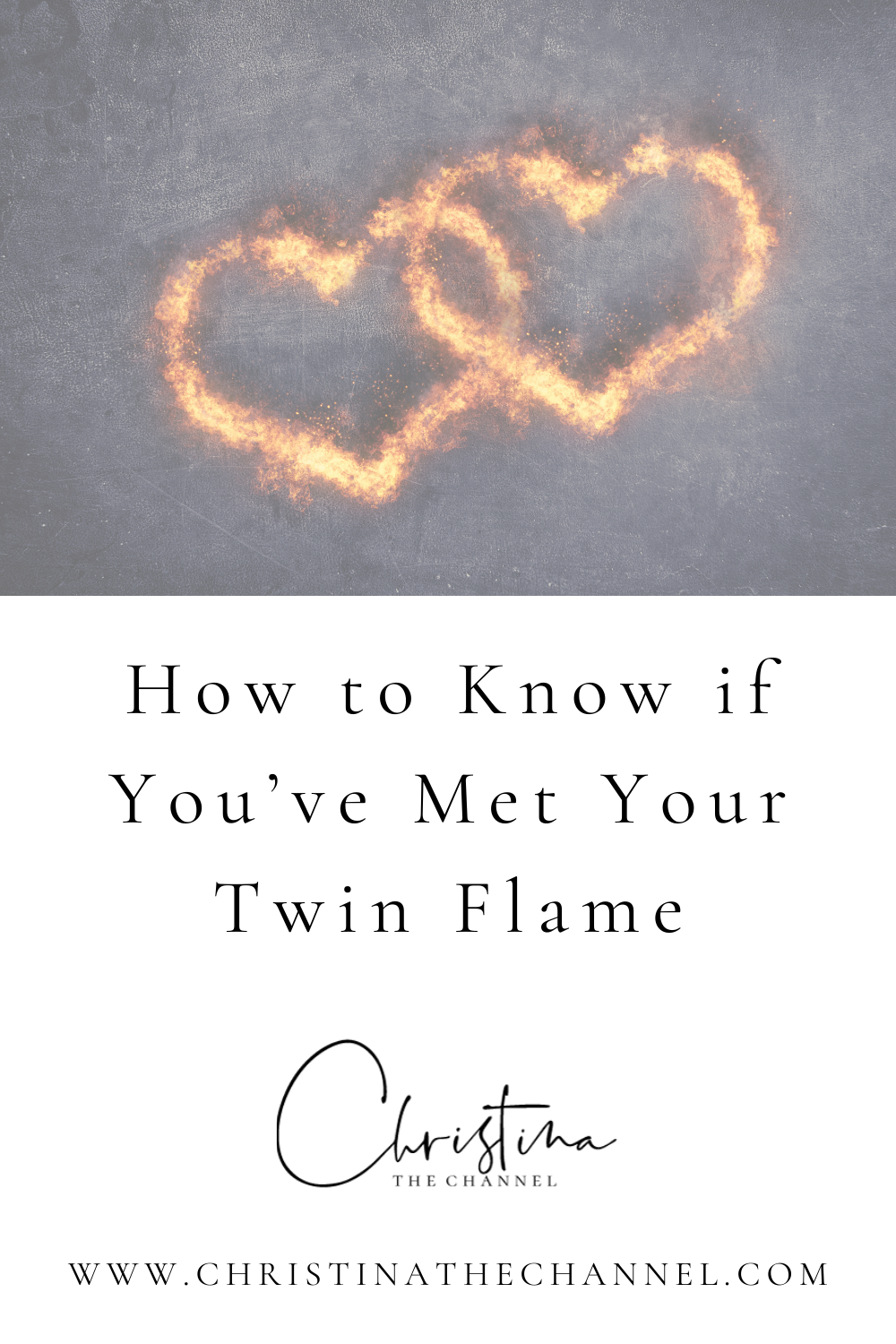 I avoided this subject for a long time for a number of reasons, the main two being –

But the way I work is I really have to have enough of my own personal experience with a spiritual “concept” – either through my own life or through a number of clients – for me to know for myself. Everything’s a game of telephone nowadays, and a lot of people share things they’ve heard but don’t know for themselves, without any discernment.

Anyway, I definitely got that personal experience — but that’s for a separate post. I’m bringing this up now because so many twins are coming into union this year, and because pretty much all I’ve been channeling recently is about twin flames, soulmates, romantic relationships, etc. Prep for the next book.

I don’t control what they want to share… I just listen and relay it. Topics come through at specific times for a reason.

As always, take what resonates and leave what doesn’t. I’m sharing my views on this based on what I’ve channeled & personal experiences / working with countless clients. My beliefs don’t have to be yours and I’m fine with that.

The terms “twin flame” and “soulmate” are often used interchangeably by people who don’t fully understand the concepts, but they’re not the same thing. Twin flames and soulmates are different, as are different types of soulmates. Further, people often use the term twin flame and / or soulmate when what they are really referring to is their life partner – again, different. (Listen to this podcast for more on that topic.)

That being said, thinking of twin flames as divine masculine and divine feminine I feel is a bit outdated and based more on souls that incarnated generations earlier. Where we’re at right now is quite different…

A twin flame is when you have the same soul. This is different than a soulmate – having resonance with other souls.

Some other themes that come up with twin flames (but not *requirements*):

When you have a twin flame, your missions are intertwined. This is one reason why so many twins are reuniting right now. People are being CALLED UP to fulfill their missions – no more waiting around. Twins who are incarnated right now did so specifically to come in union to help with the astronomical frequency shift we are going through as a collective / on this planet. If you’re a twin incarnated right now, it’s pretty significant.

With this year specifically (2022) being a universal 6 year in numerology, before our collective 7 year, people are coming together with the partners that will support them during the huge expansion happening / to come. Now is the time! This year is a huge year for twins to finally come together — it’s already happening.

Here’s the important piece – having a twin flame incarnated is relatively rare. It is not “better” to have a twin flame than to not – it’s simply a specific experience. Similar to having a biological twin in this lifetime – it’s a specific experience your soul chose in this incarnation to teach you the lessons you signed up for, to set you up for the experiences necessary for your mission, etc. Not everyone has that same experience because not everyone has the same mission or the same lessons that are meant to be learned. Twin flame love is not better or worse. It’s just very different.

But in a society that is filled with many narcissistic, codependent relationships (let’s be honest…), and where unhealthy relationships are actually modeled in mainstream media as “romantic” — again, let’s be real — and where most people haven’t actually experienced divine love in this human form yet (are you triggered yet?), it’s easy for people to confuse an intense relationship with a twin flame.

Again, having a twin flame isn’t better or worse. In fact, it is such an intense and triggering experience, you might not even want to. It pushes you to your limits when it comes to love, and what that really means. Because it is so intense, soulmate relationships are often much more stable than twin flame relationships, depending on how much personal, emotional, and spiritual work the individuals in the relationship have already done.

I’m explaining this because people read all kinds of things on the internet about twin flames that aren’t necessarily true. First of all, twin flames are not inherently toxic relationships. It depends on the people. I know multiple true twin flame couples (same soul) who never had any of the toxicity. There was no running and chasing. There was no “separation” period.

I also know true twin flames who have had that.

What we have to be careful of is this – someone has an intense connection with someone, beyond anything they’ve ever felt, they start to think that person is their twin flame, they know the “steps” and “phases,” and then they start to create a self-fulfilling prophecy. I’ve seen this with multiple people in my life, who thought someone was their twin flame, and then their actions based on that belief created the experience of the running, chasing, separation, and so on, and then later they found out it wasn’t their real twin flame.

I mean, how many relationships do we know in general that have a runner / chaser aspect? People swipe endlessly. We use terms like “ghosting” and “breadcrumbing” as standard dating lingo — I think that speaks for itself.

Your twin flame is your most intense mirror. It’s YOU, but in another body. Suddenly you can see it so clearly – how you come across to other people, the “annoying” things you do, your light, your shadow, your fears, your unhealthy habits, your wounds — it’s staring you straight in the face.

We get triggered by everyone around us who mirrors for us (because anyone can be your mirror) — getting mirrored by your twin flame is on a completely different level because it is YOU. People don’t even like to listen to recordings of their own voice — imagine seeing your soul in another body. There’s that, plus the intensity, the telepathy, the depth of SEEING, and the physical intensity.

It is of course triggering, but people respond to triggers differently.

However, if two people have already been on their own personal growth journeys, have developed spiritually and emotionally, have a higher level of emotional maturity and know how to explore triggers lovingly, the experience will be quite different.

So, how do you know someone is your twin flame?

My best advice is to detach from whether or not you have one, and to let the universe do its work. Oof – I know that’s a hit to the ego, but here’s the thing. If someone is truly your twin flame, you are going to unite. It won’t miss you. There will be so many wild, undeniable synchronicities, it will be made known. And to be honest, I think that’s much more fun – sit back and watch the universe do its thing.

If it’s meant to happen, it’s going to.

Here are some things that people experience when they meet their twin flame:

These are just some of the signs people experience, not all of them. Just because you haven’t experienced all of them doesn’t mean they’re your twin flame.

Also, just because you do experience these signs doesn’t mean someone is your twin flame.

Remember, everyone’s experience is different. A common theme I see is that the more spiritually awake twin instantly knows and has visceral experiences, but the twin who is less in touch with his / her / their intuition doesn’t always realize at first and takes some time to catch on, or to open themselves up to the experience. If either twin isn’t consciously ready to know, or if a piece of them is resistant to experiencing that depth of connection, it can take more time for them to realize at a conscious level.

On a soul level, they know.

For me, I simply knew. The moment I saw him, I thought, “That’s me.” I immediately saw everything – the origin of the split. I had another Kundalini rising. I just knew. Everything in my life changed after that. And it was in that moment that my ego also took the hit, because I didn’t want to feed into the “twin flame” conversation that I used to think was overblown…but it’s real.

And that’s what I’ll say — how do you know someone is your twin flame? You do the work to learn to listen to your soul. To hear your ego, but ask it to step aside and allow your soul’s knowing to come through loudly and clearly.

Because when you can listen to your soul, not just your brain or ego, you’ll just know. And you won’t have to consult the internet to figure it out.

If you’re ready to manifest the love your Soul desires, click here to check out my Manifestation Activation Set on Love & Relationships!