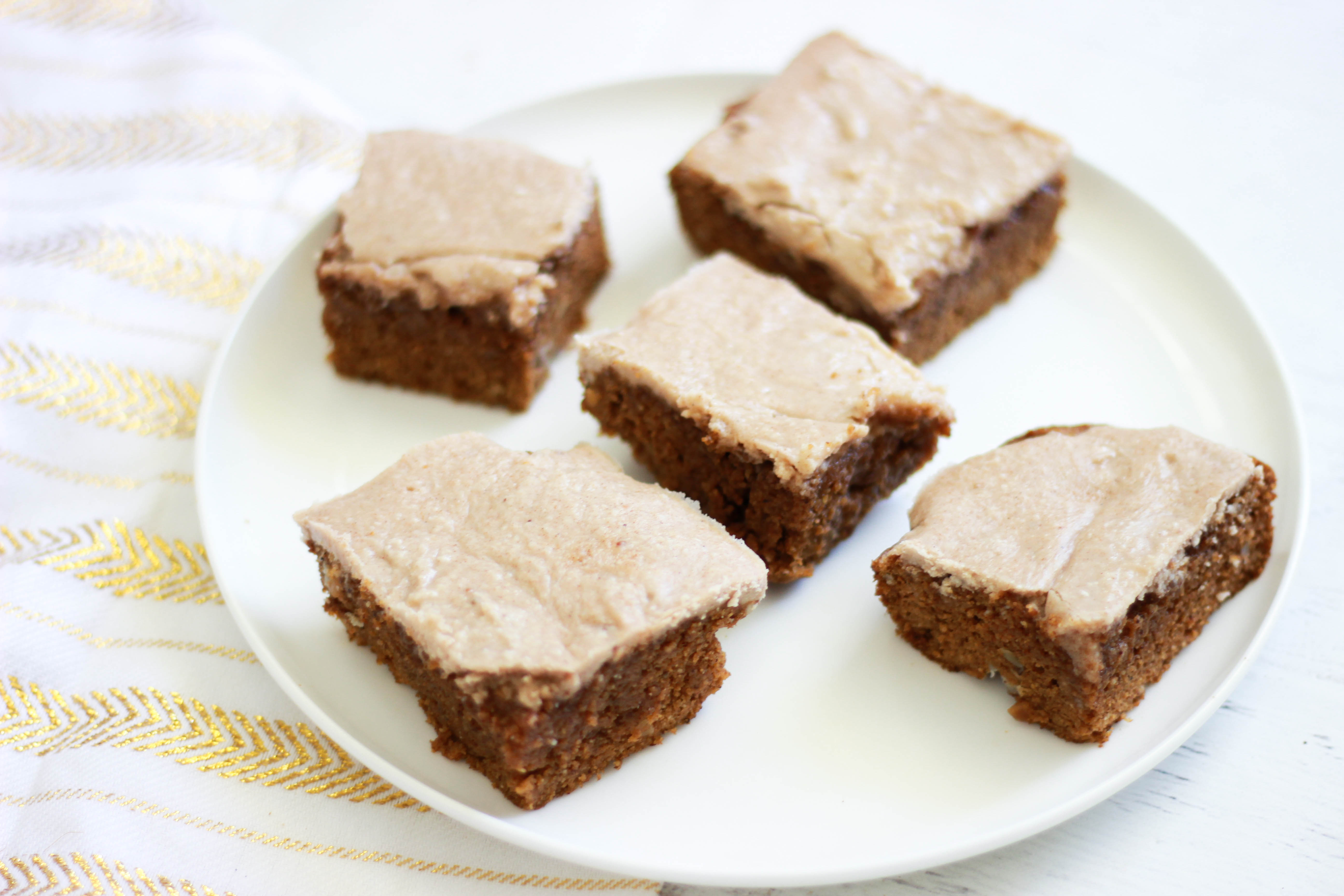 I’m incredibly proud of that ebook, because when I say sugar-free, I REALLY mean sugar-free. It’s all too often that I see something labeled “sugar-free” on the Internet, and when I click to read the recipe I discover that they’ve simply replaced the sugar with a sugar substitute. That’s not what I wanted. 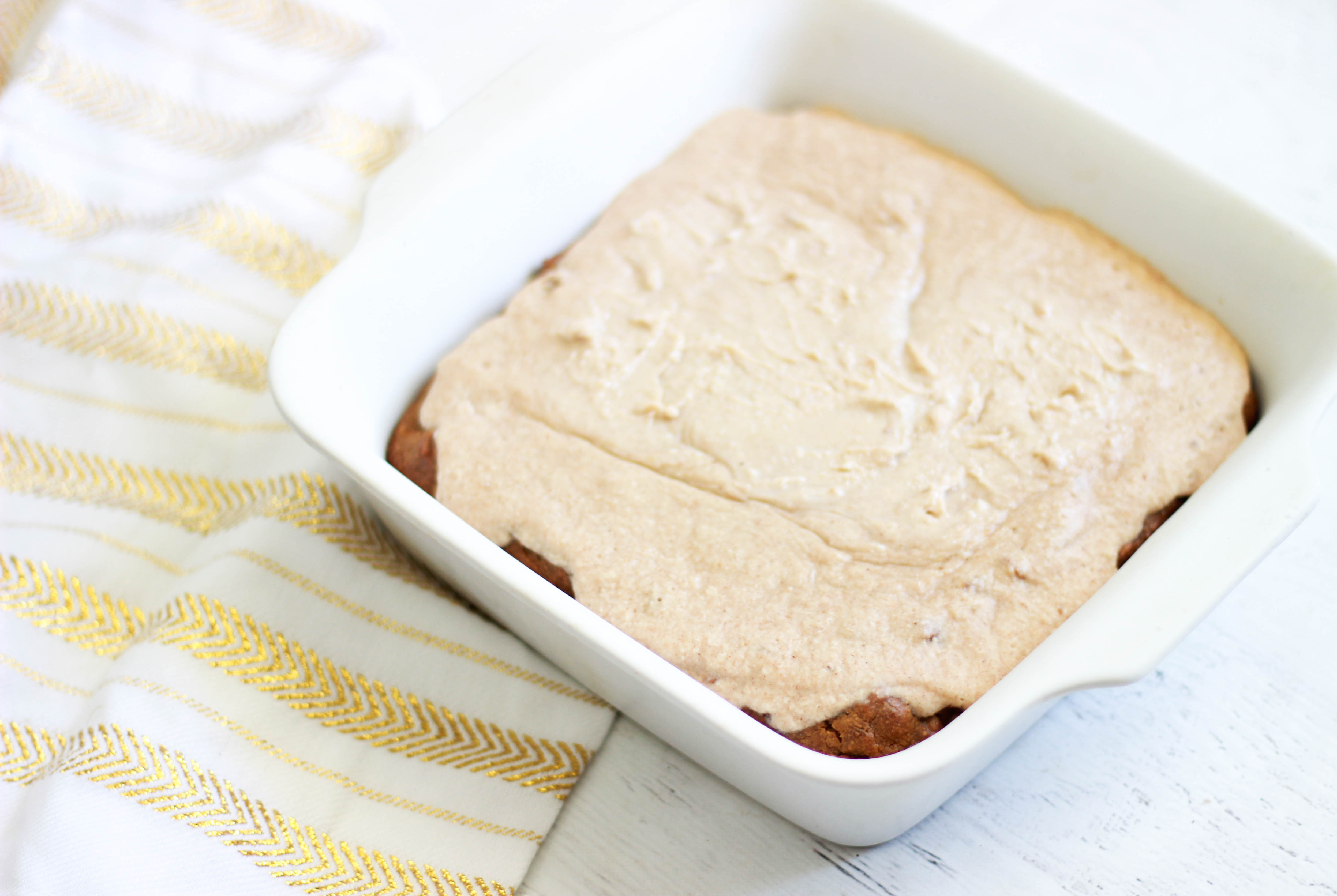 The recipes in my ebook are not only sugar-free, but also sweetener-free. That means no stevia, xylitol, monkfruit, erythritol, or any other sugar sub. It also means no bananas or dates. The majority of the recipes are entirely fruit-free, but the few that do have fruit only use low-glycemic berries. So yes, they’re REALLY sugar-free. 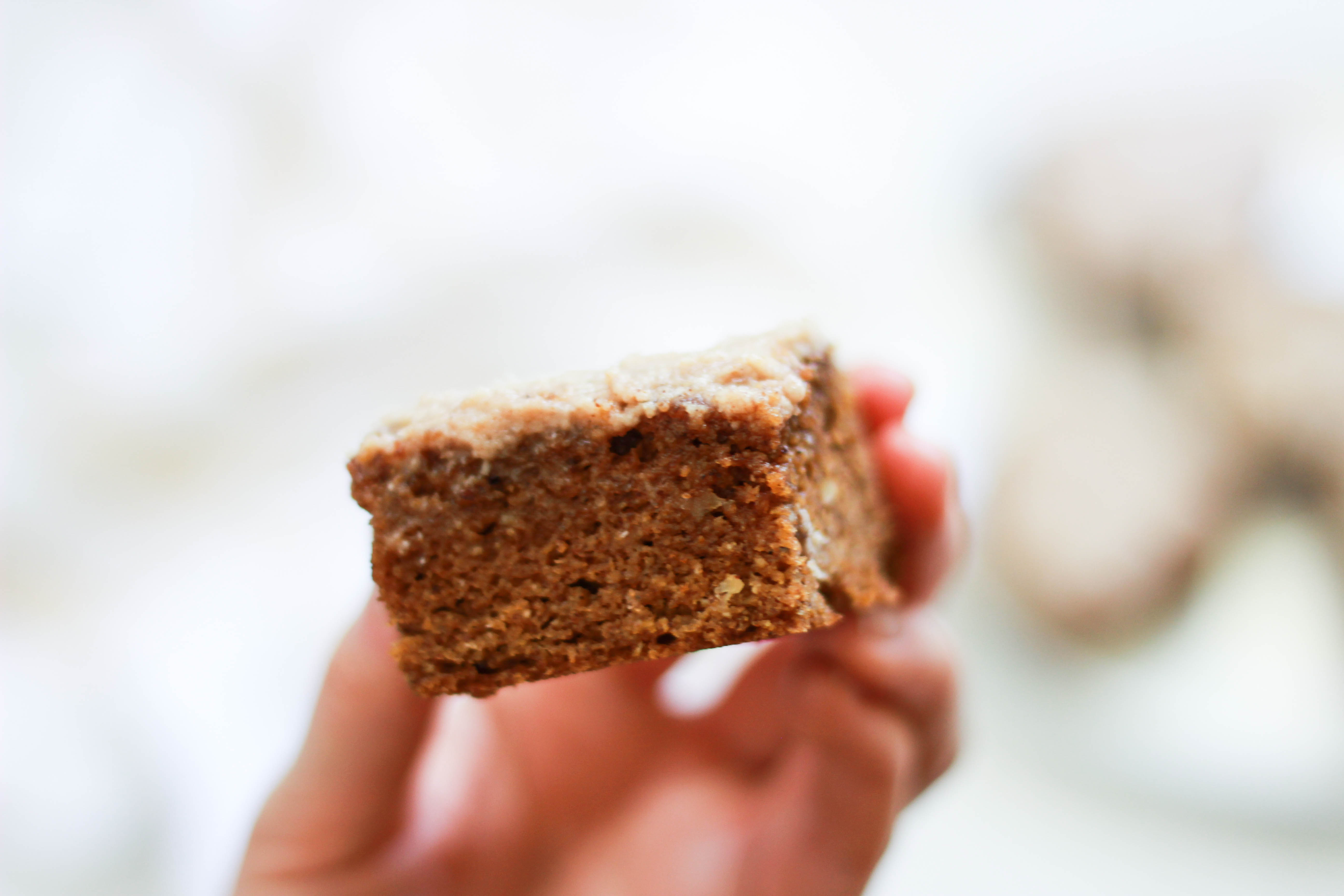 The reason why I’m so proud of that ebook, though, is really because of how many people I know it’s helped. As someone who has been on gut protocol after gut protocol and who also has a very sensitive stomach, I’ve spent a fair amount of time being sugar-free. I wanted to create an ebook I wish I had during all of those protocols so that I could have had a dessert when I craved it and didn’t feel like I was missing out on anything. I wanted to create a resource my clients could use when they had to go sugar-free or very low-carb while healing their guts. Candida-diet, low FODMAP, keto, low-carb – that shouldn’t stop you from living your life. It makes me so happy when I receive emails or comments from people telling me that this ebook helped them get through a protocol that they never thought they could get through, or that it got them off of sugar without them ever feeling like they had to give something up. 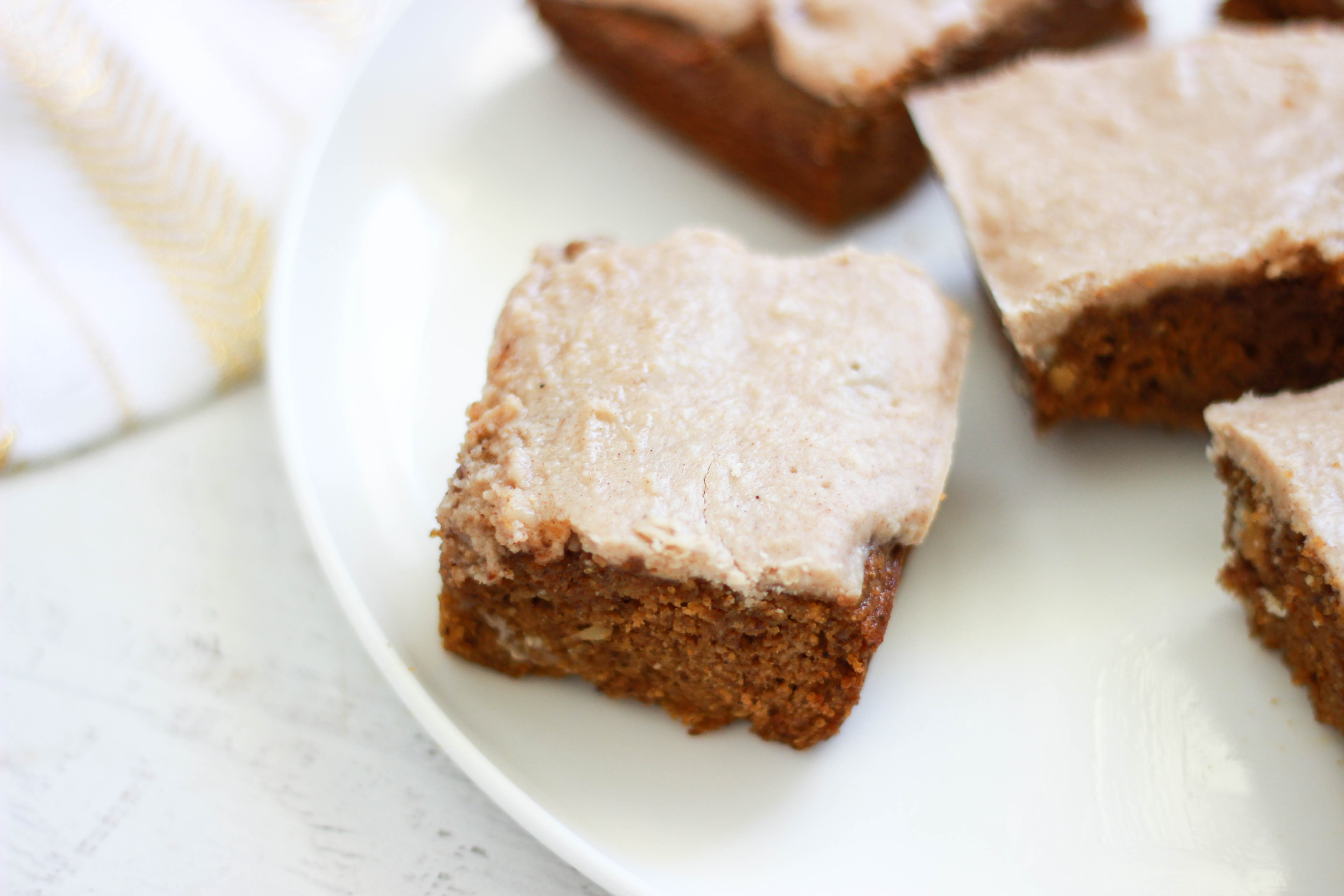 That’s the other thing – I want to show people that you don’t always NEED to add sweeteners to things. Most people have gotten too dependent on sweeteners and sugar. Sugar is not doing your health any favors. While I don’t think a little sugar here and there is the end of the world, I don’t see any reason to add it in unnecessarily. Most people would benefit by reducing their sugar intake. I’m all about REAL FOOD ingredients, and I like the idea of letting the natural sweetness of foods really shine through on their own. Instead of sweeteners that can spike your blood sugar, cause gut distress, and create inflammation in the body (yes, even zero calorie sweeteners can do this), I like to use ingredients like vanilla, cinnamon, and coconut that provide sweetness on their own. 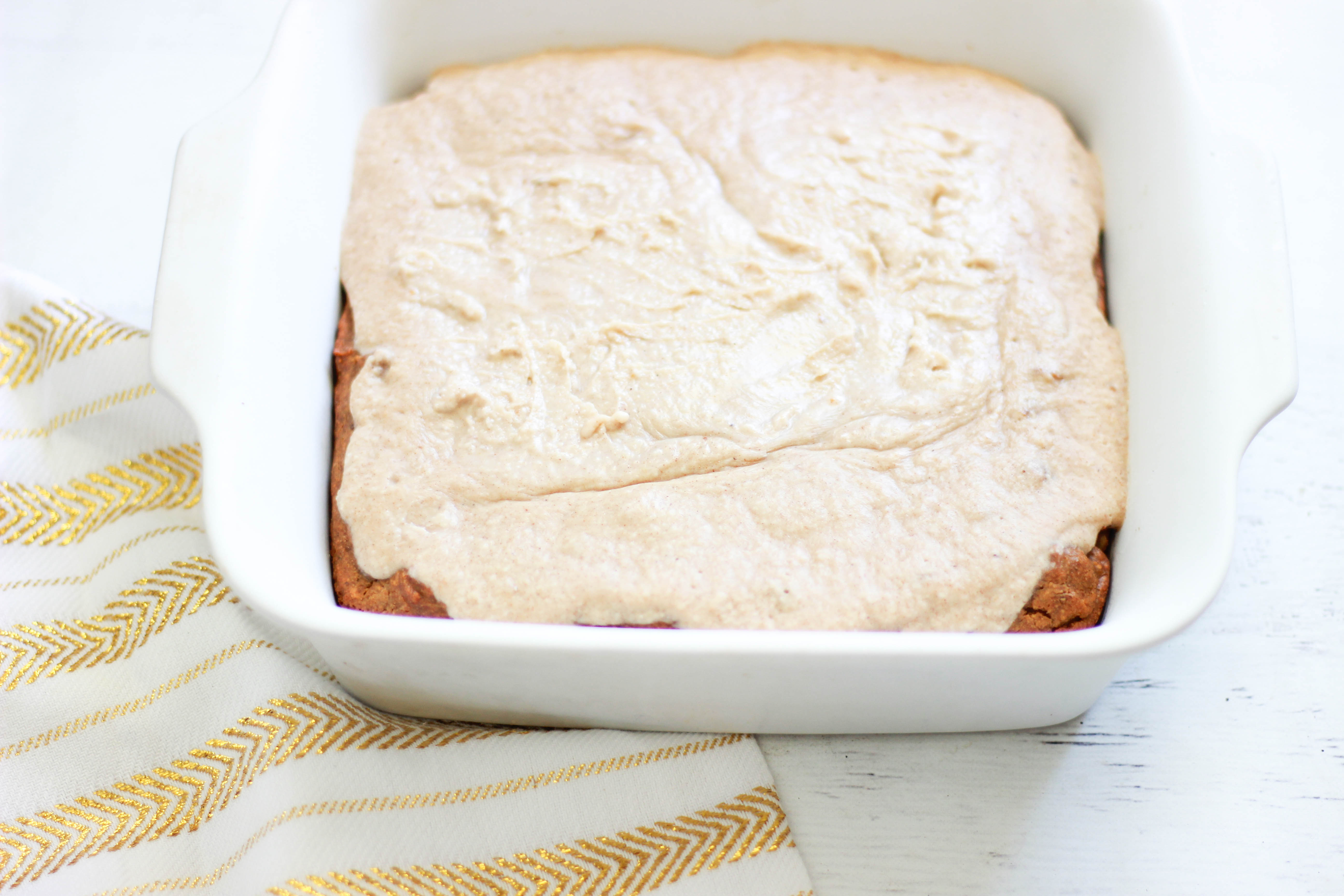 Some of the desserts in my ebook are definitely for the paleo-fied palette, so to speak (people who are already used to a whole-foods diet), but there are also plenty that I know even sugar-lovers enjoy (I’ve put them to the test). In this new ebook, though, I have to say…I REALLY impressed myself. I think I’m getting even better at sweetener-free desserts. 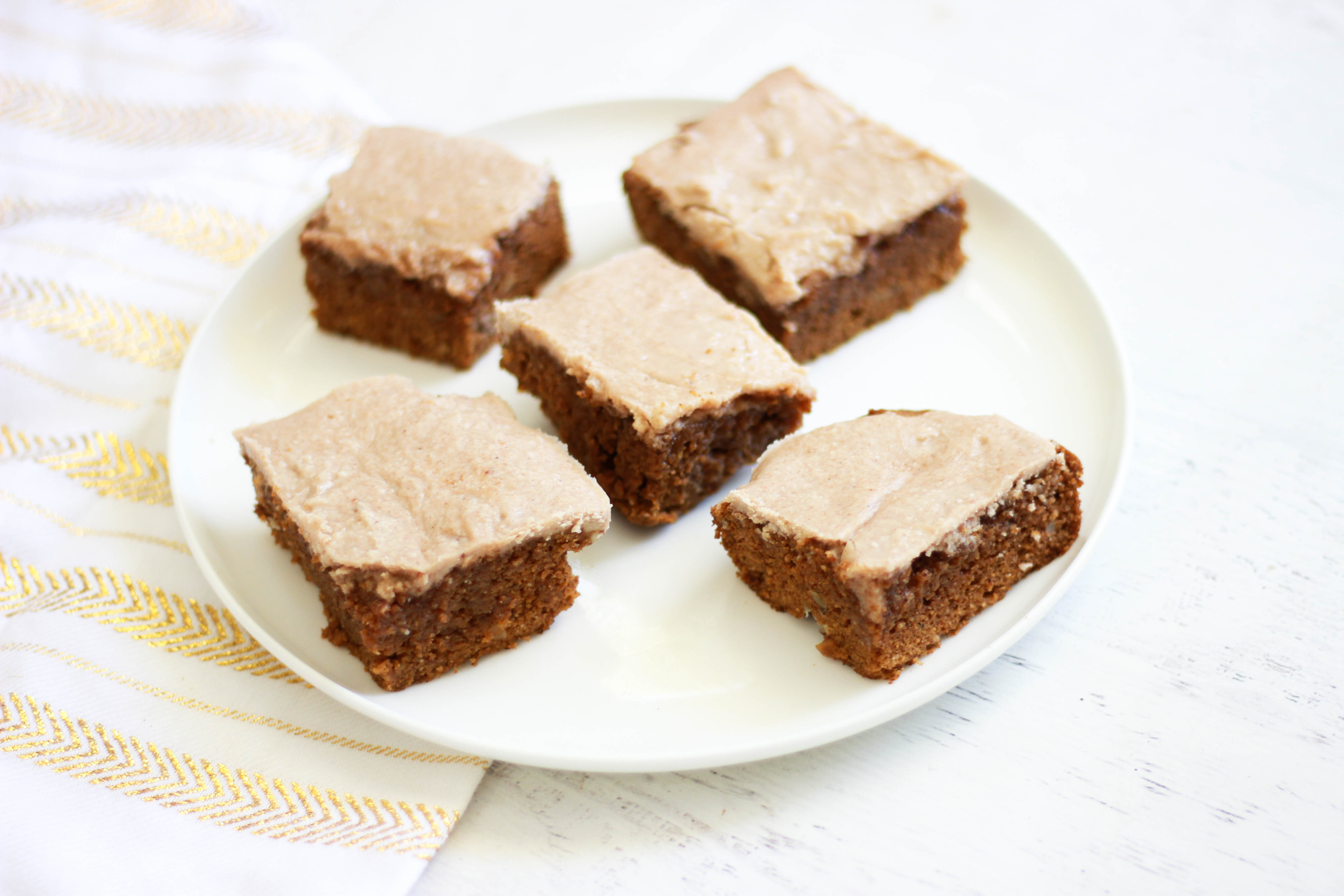 I love #NSNP, but I’m even more excited for the second installment to release because I know you’ll be blown away with the recipes. All still sweetener-free, but even less have fruit. All are paleo, and almost all of them are vegan. I had so many ideas that I created more recipes than I initially planned on, so you get some extra goodies in there! The ebook should be out mid-November, but in the meantime, I wanted to give you a lil’ sneak peak of some of my sugar-free baking. 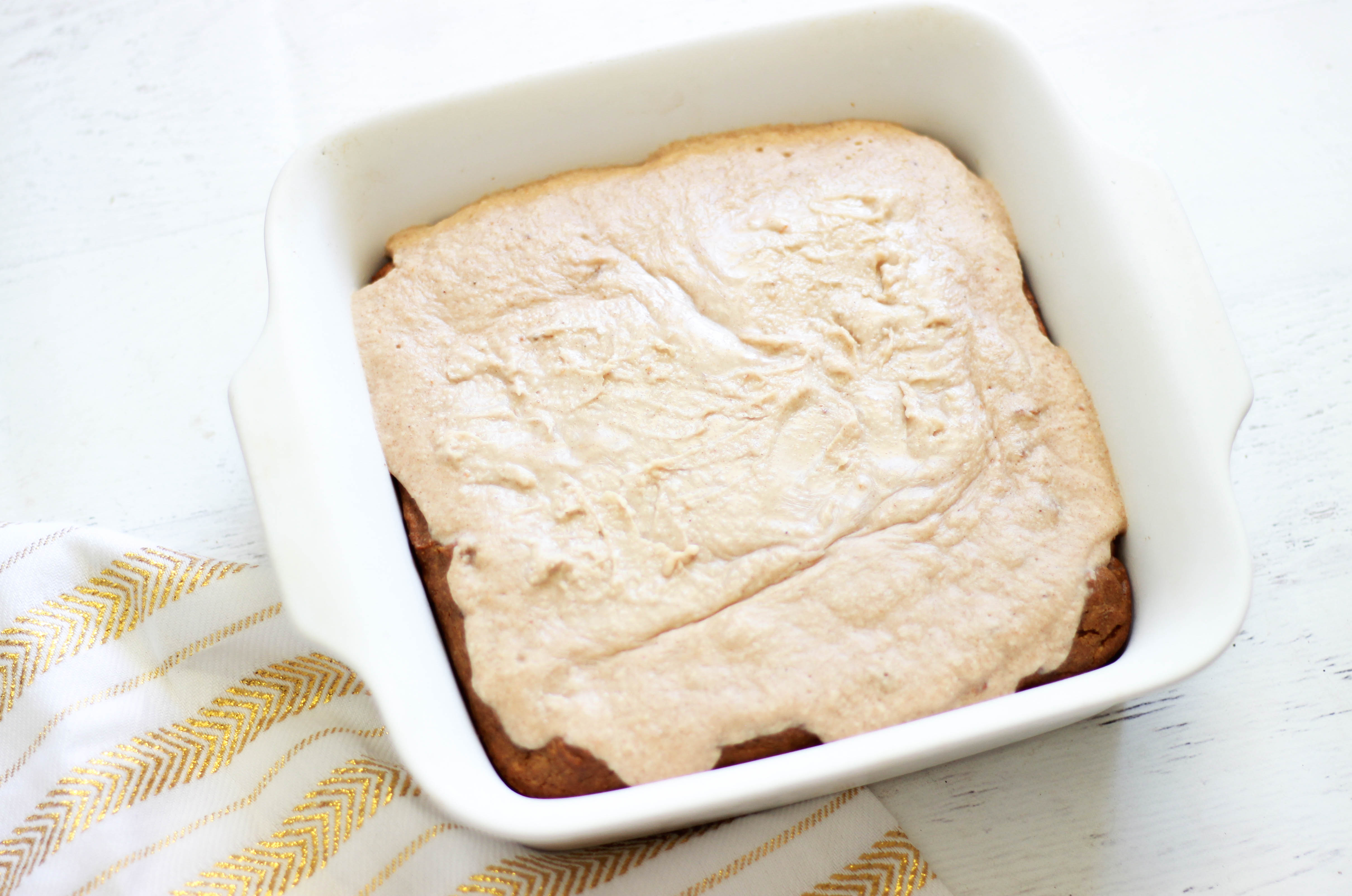 I decided not to put this specific recipe inside the ebook, because I wanted to share it with you all early on – especially before Halloween! I’ve been itching to get a pumpkin recipe out to you, and my first one of the year has arrived! 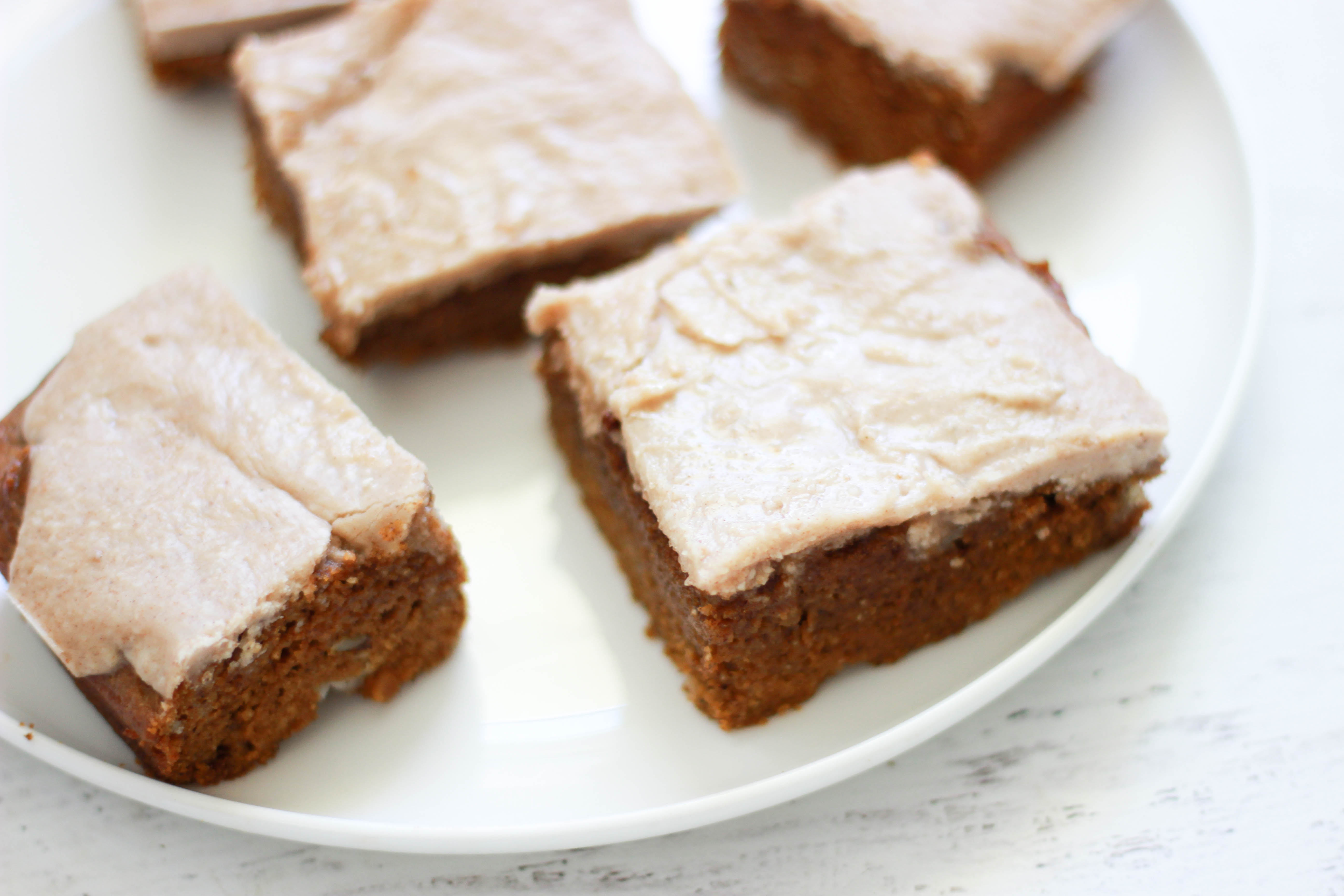 These pumpkin bars are somewhere between the texture of a brownie and a cake. They’re like a cakey brownie, or a really dense, moist cake. I was going to call them Pumpkin Cake Bars, but I felt like the name was getting too complicated. Very typical of me. If you want, though, you could cook this in a loaf pan as a really dense loaf and increase the baking time, or even in a regular cake pan. I stuck with the 8×8, though. 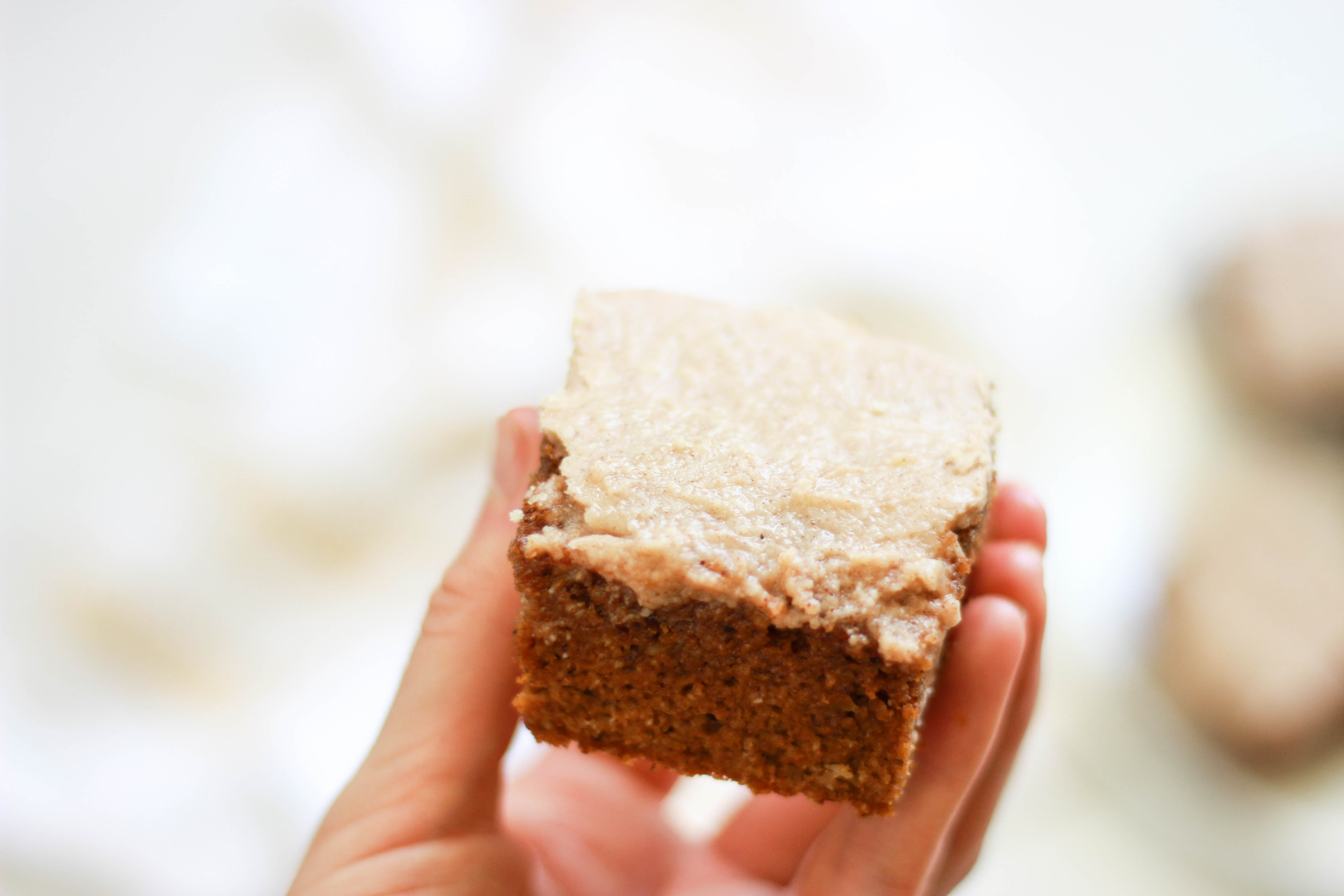 These pumpkin bars don’t need any sugar – they’re already sweet enough on their own! I created a pumpkin spice frosting that really ties it all together, although it’s totally optional. Even without the frosting, the cake-bars are phenomenal! They’re moist and dense without being too heavy (just make sure you don’t overcook them, which will dry them out). The frosting definitely makes them even better, though, if I do say so myself. 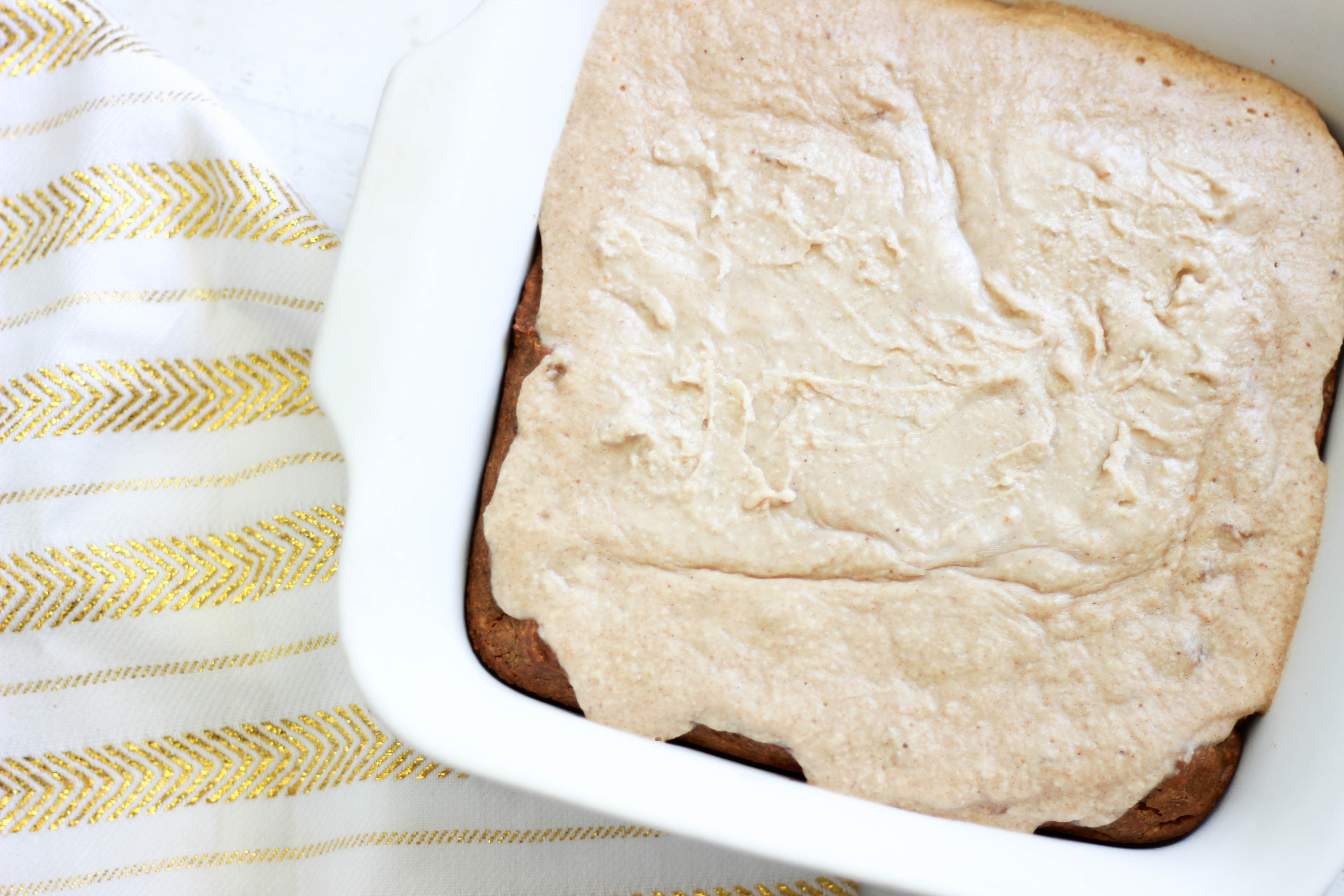 If you do make the frosting, I recommend waiting until the bars are completely cooled before adding it on, otherwise the frosting will just melt on the cake. It happened to me the first time I made these, because I was just so excited to eat them! 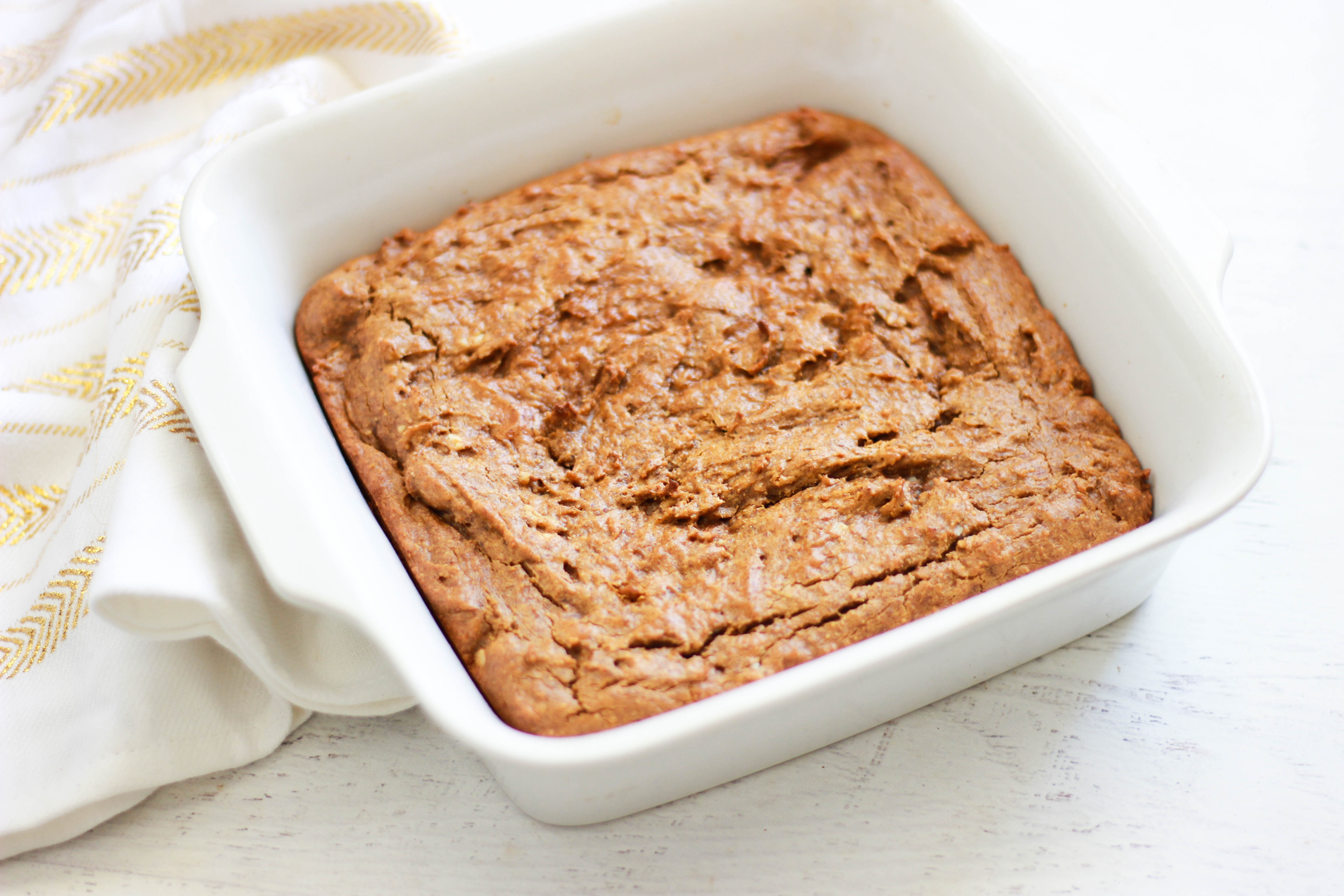 I recommend storing leftovers (if there are any) in the fridge so the frosting doesn’t melt in case it gets warm in your house. For some reason, I actually like these refrigerated better than straight outta the oven! 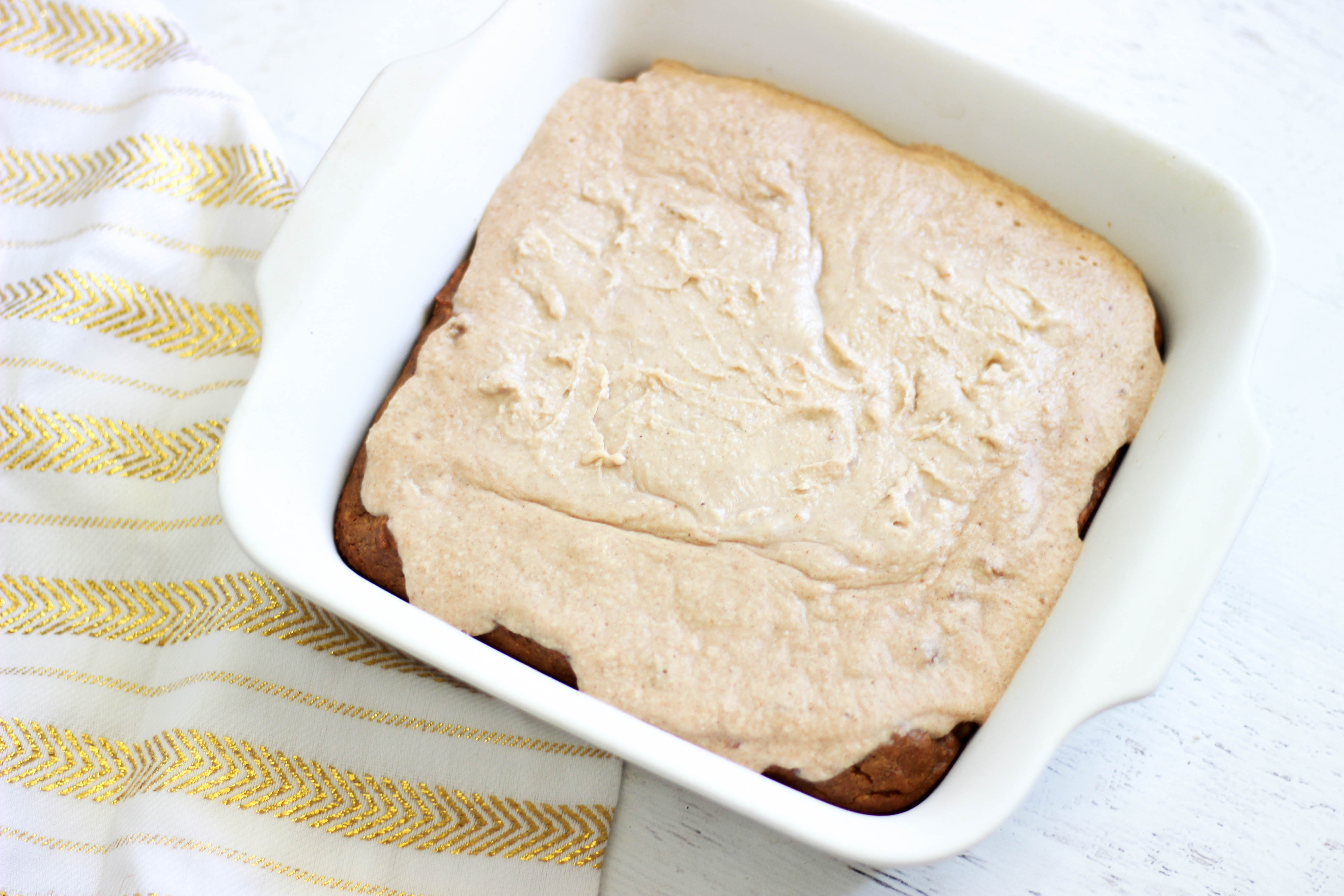 They’re definitely addicting, so beware. I gave some of these to friends who LOVE sugar, and they loved them, so this passed the taste test with flying colors. They’re the perfect bars to make for a group, especially if the group likes pumpkin! 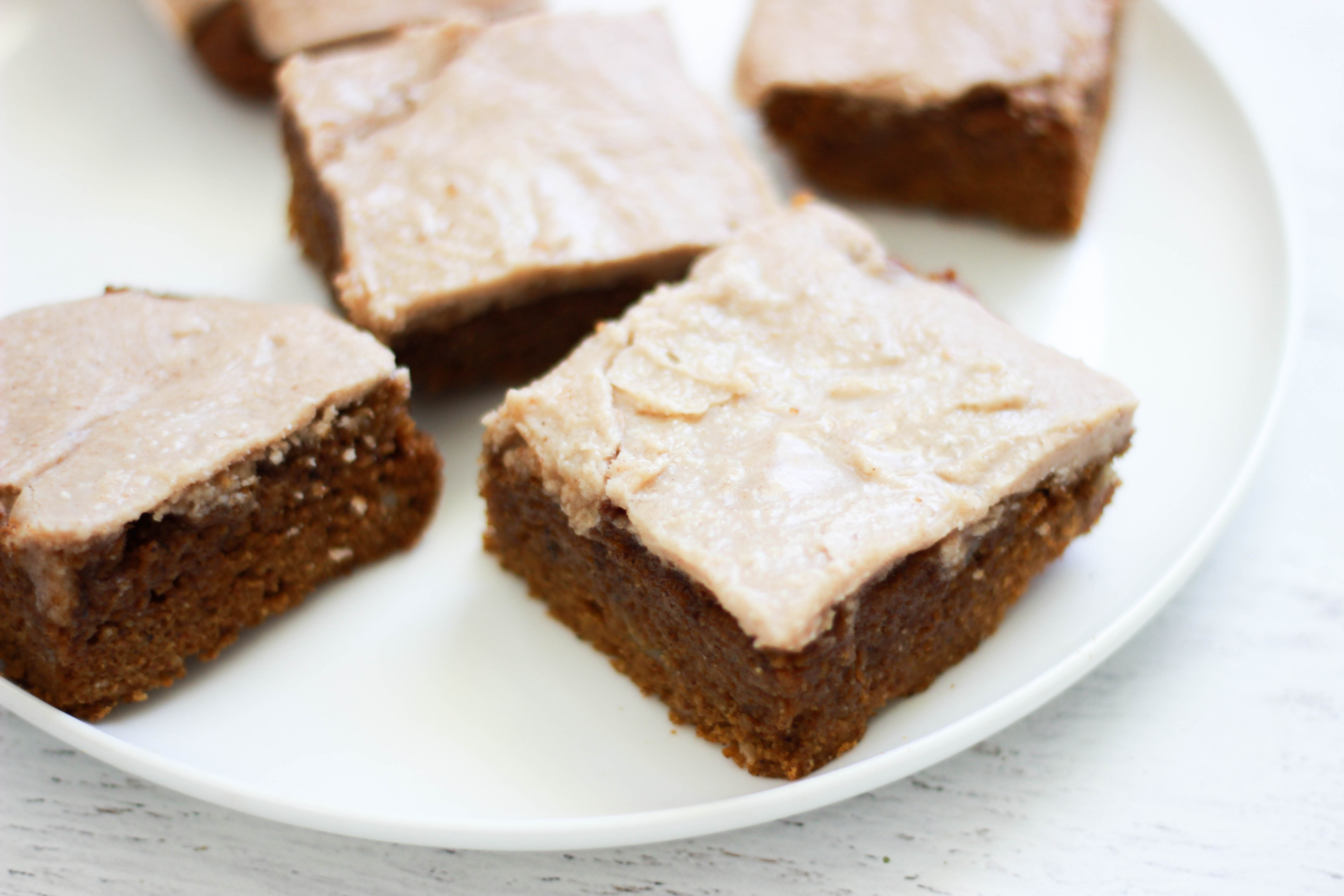 If you’re in the fall baking mood but don’t want to add to your sugar intake, these are for you! They’re extremely simple to make – you just need two bowls. I try to make all of my recipes very hassle-free. Pour the ingredients in a bowl, mix them, and bake. To be completely honest, I hate using electric mixers, so I actually just mixed up the frosting with a spoon. It would probably be fluffier and easier to mix with an electric mixer, but I’m all about lazy-girl baking as long as it tastes delicious. Which these do. 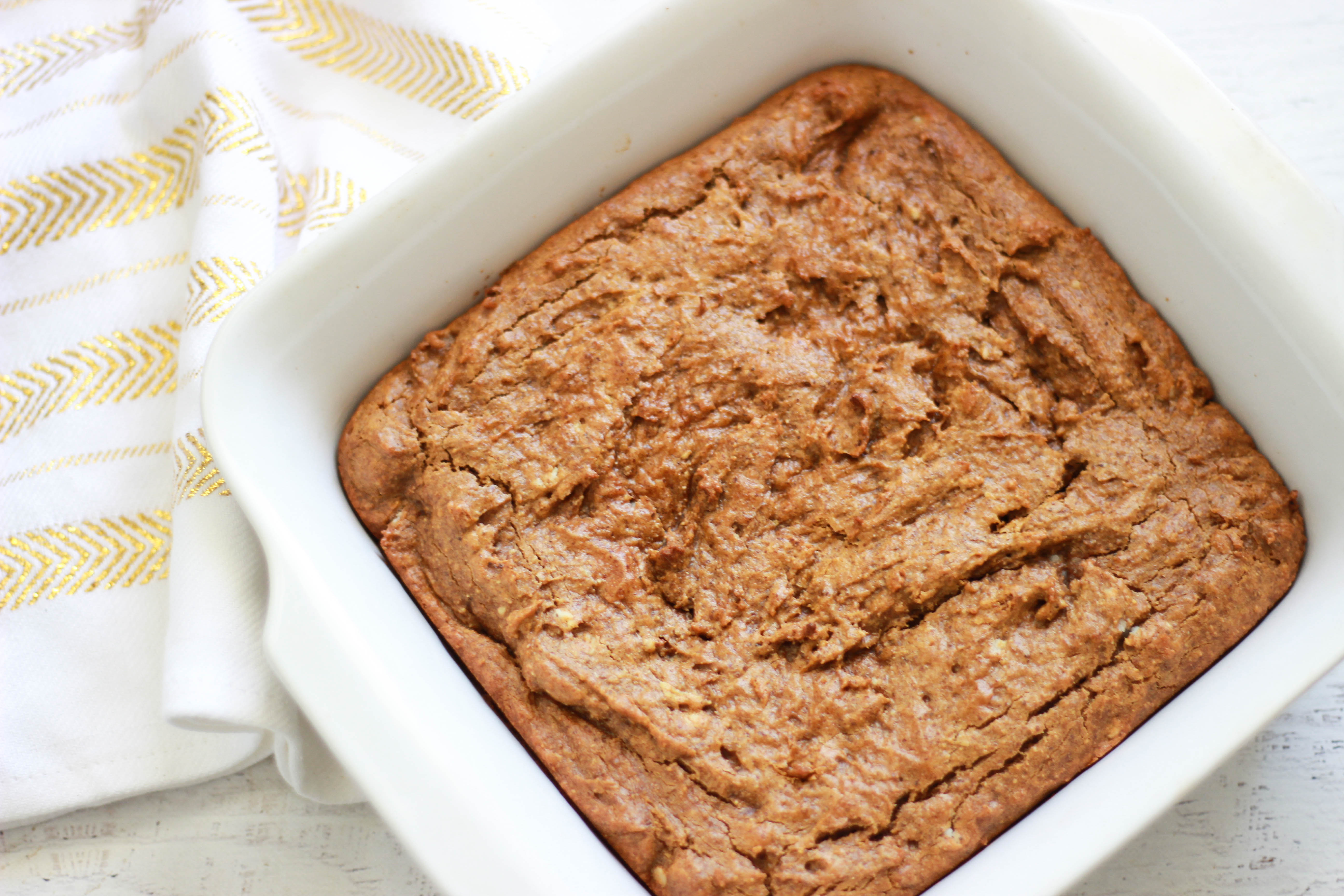 These Pumpkin Bars with Pumpkin Spice Frosting are paleo, keto-friendly, low-carb, sugar-free, and completely-sweetener free. I have not yet tried replacing the egg with a flax egg to make them vegan, but my hunch is that it would work easily. Whenever there is only one egg in a recipe, I’ve never had an issue subbing in a flax egg. Either way, they’re the perfect fall treat for all of my fellow pumpkin lovers! I hope this recipe gets you just as excited for #NSNP Part 2 as I am! If you’ve ever wondered what my sugar-free baking is like, you can get a taste right here! 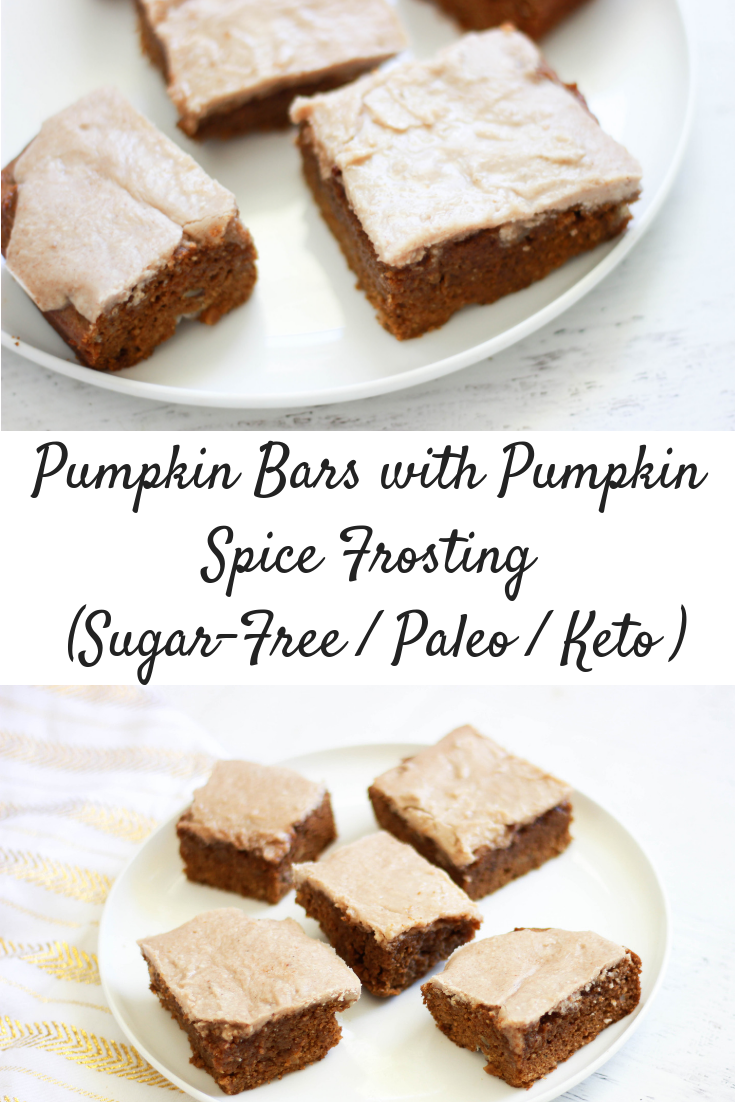 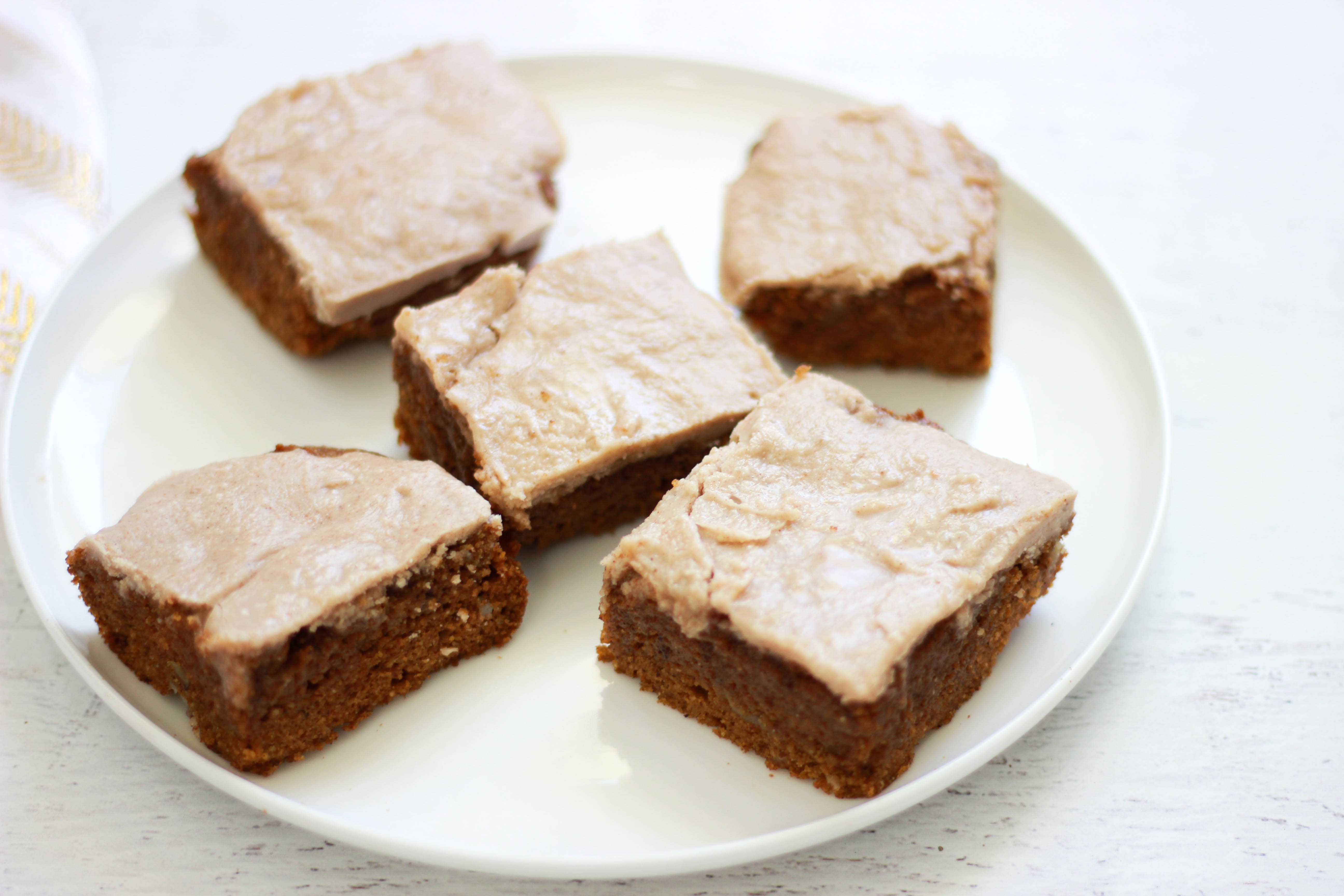