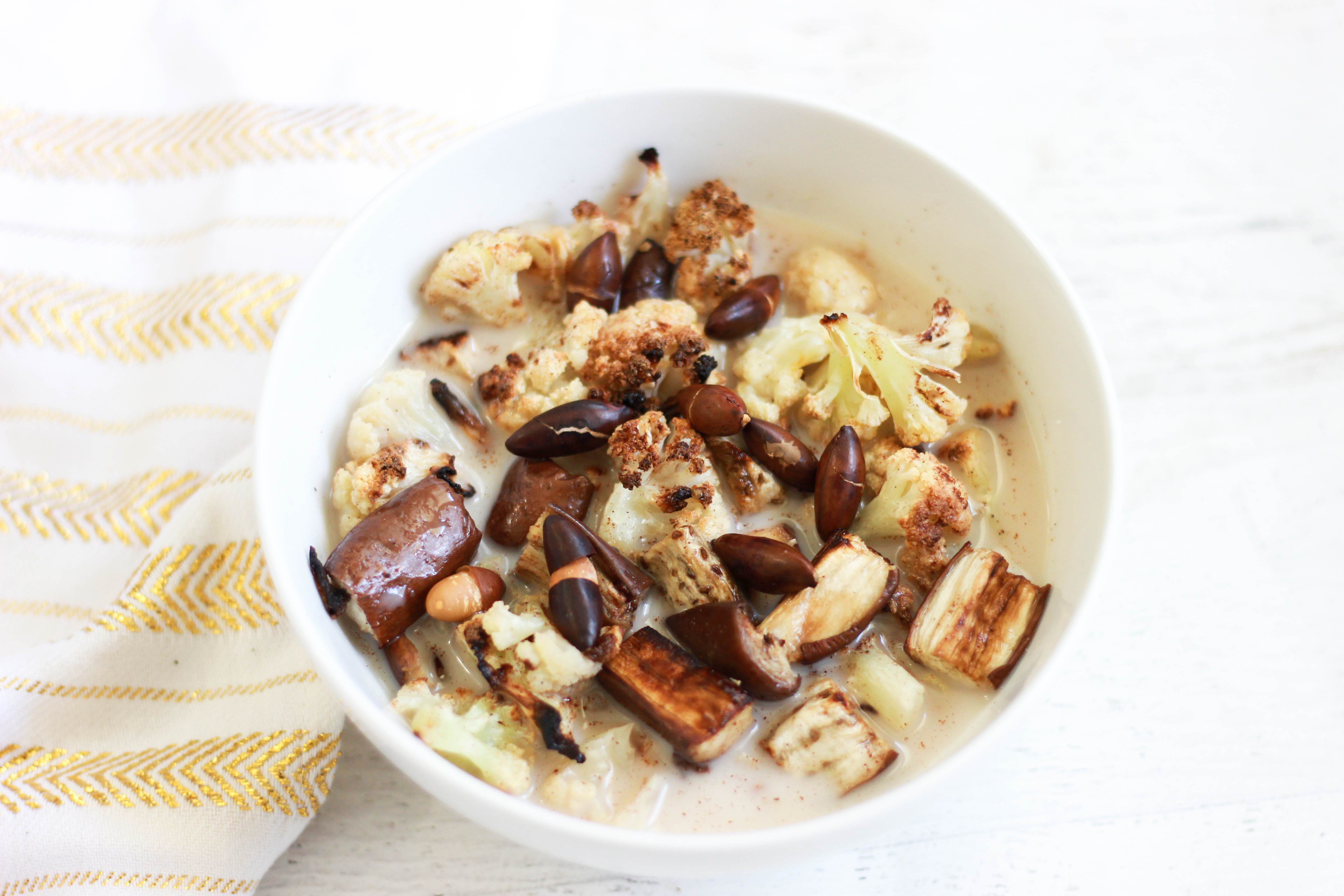 I’ve been doing something recently… and I wasn’t going to bother posting about it because I figured it was just a weird thing no one else would be into. I’m not sure if this even qualifies as a “recipe.” Then I told my friend about it, and she was really excited and wanted to try it. So I decided I might as well share it here. I’ve been eating “veggie cereal” for breakfast. 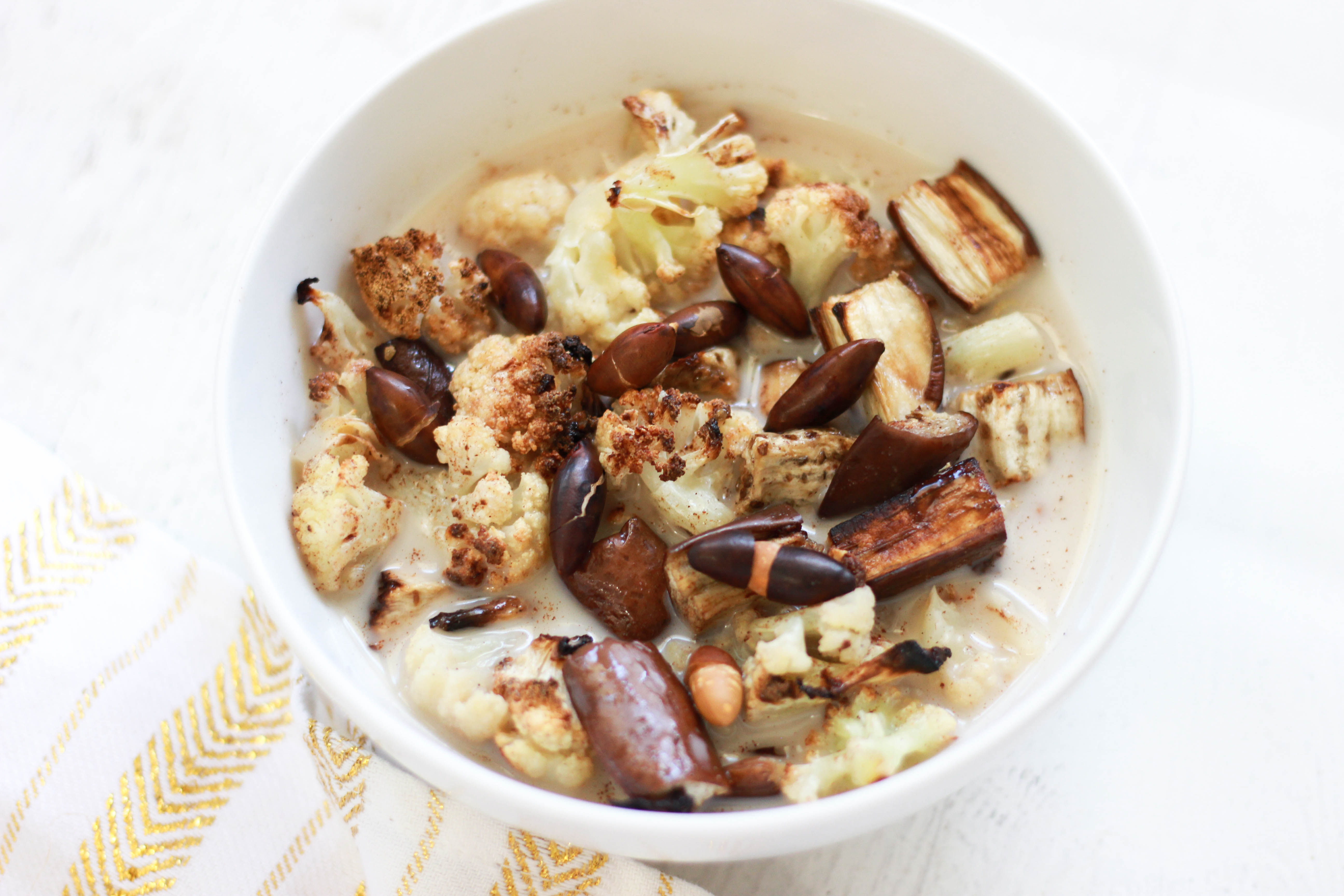 The last few weeks I’ve been feeling especially nostalgic. Watching old movies, going through old pictures, reading journal entries from 2009 – it’s been an interesting few weeks, to say the least. I find that when I want to move forward from where I am now, a lot of times I have to also work through more things from the past. Hence the trip down memory lane. Also, when I get stressed, I like to go back to things that always comforted me growing up. Anyways, diving into old memories made me start to crave a bunch of foods I used to eat regularly as a child.  Interestingly enough, I was really craving a bowl of cereal. 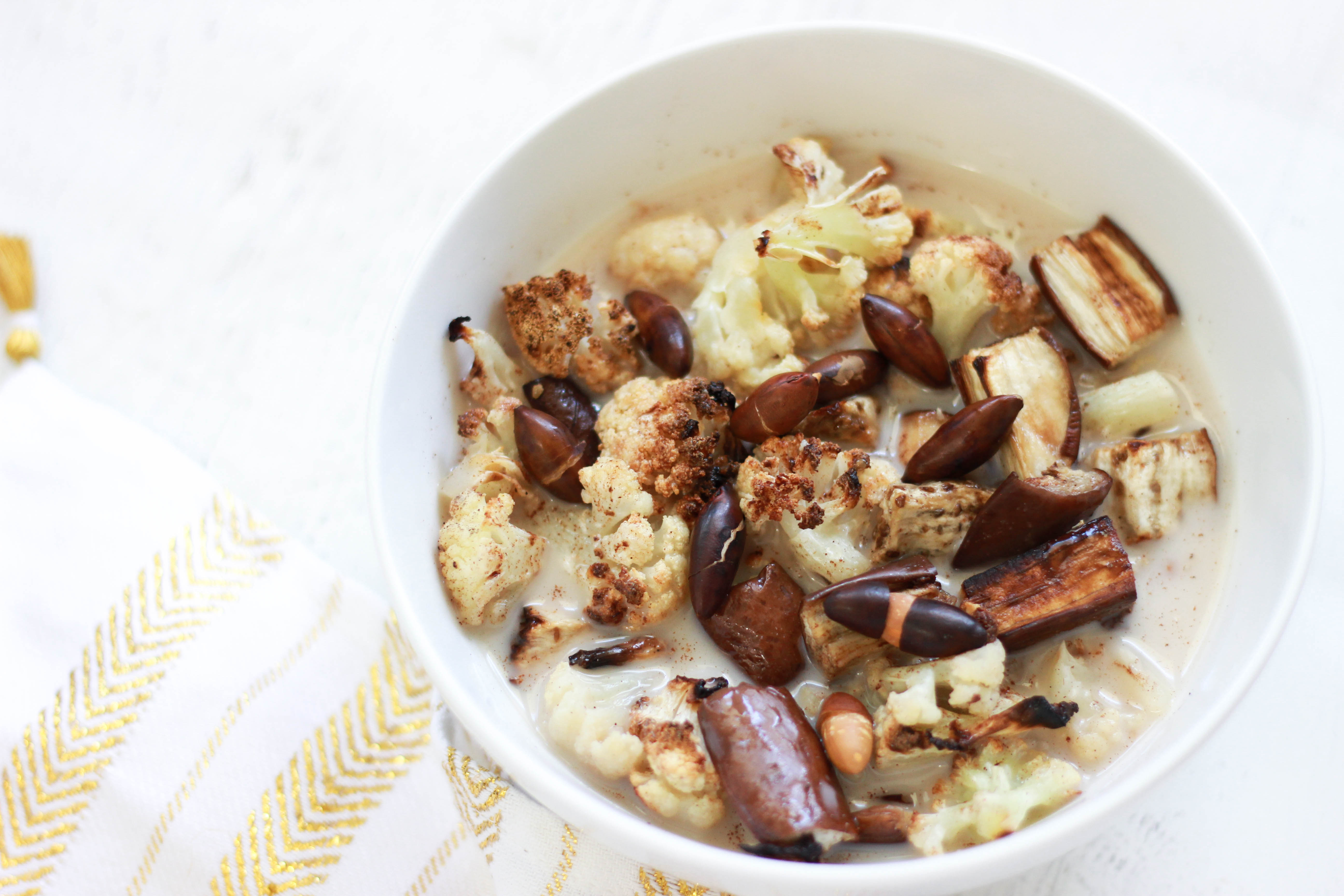 I thought about going to the store and buying some “paleo cereal” just to satisfy my craving, but I realized it wouldn’t really hit the spot. I knew I’d just want some vegetables afterwards. My body does not get satisfied or ever feel full from food that doesn’t have real nutritional value, like a gluten-free cereal. You can ask my friends – I almost always eat vegetables after I go out for ice cream because I just “need something else.” Haha! I know… I’m odd. Not sure if this is a blessing or a curse. Also, the thought of a bowl of granola doesn’t appeal to me. I’ve never been a granola person, and a bowl of nuts didn’t sound like it would do me any digestive favors. Plus, most cereals are bland in flavor, in my opinion. 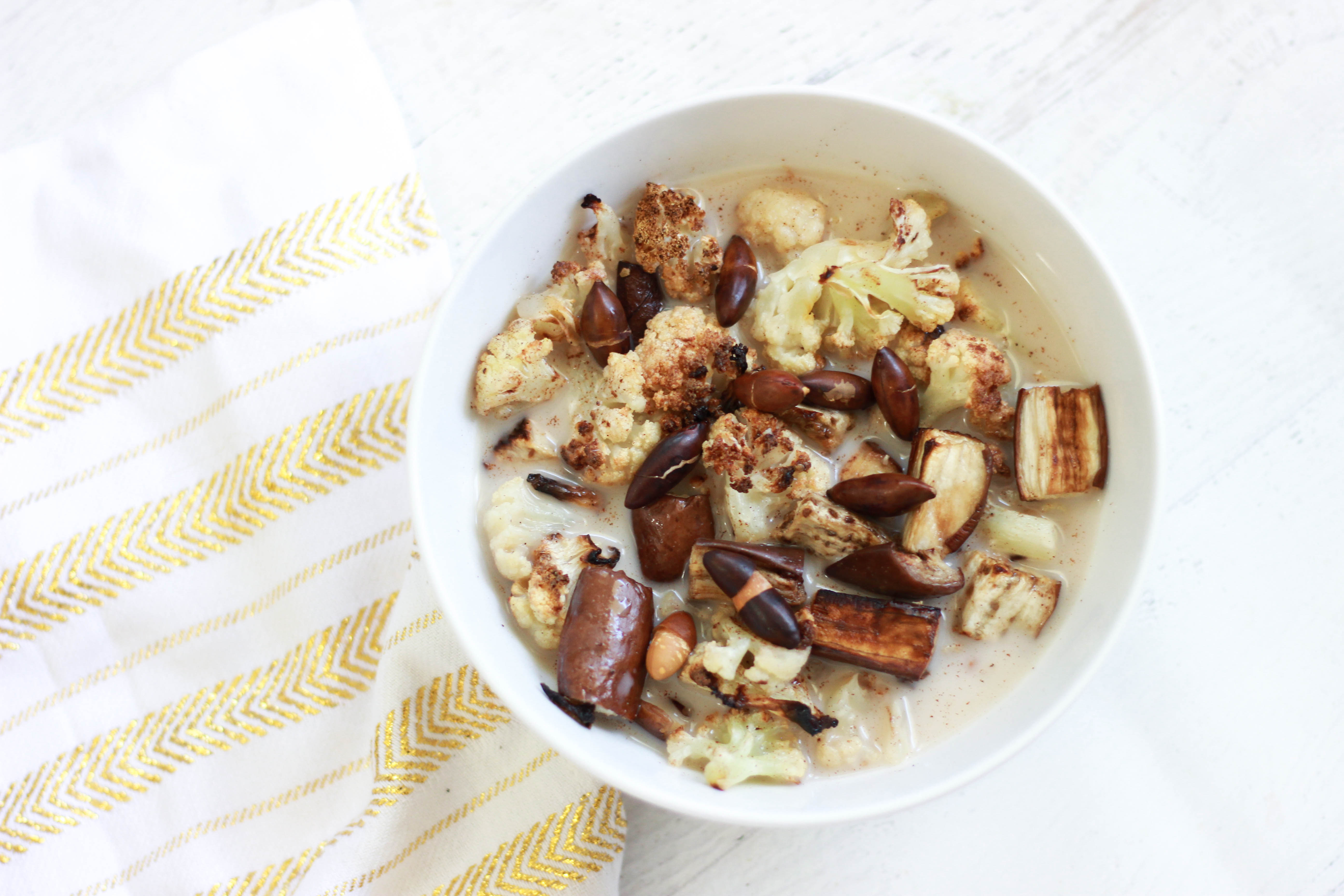 Plus, it wasn’t really the CEREAL itself that I wanted… it was a bowl of something with a slight “crunch” and cold milk. Besides that, I was really too lazy to go to the store. It’s been hot in L.A., and I just wanted to sit on my couch with a cold bowl of something “cereal-like” and watch a Disney movie. Not a huge ask, in my opinion. Immediately, I thought of cinnamon roasted vegetables – my favorite secret weapon for when I want something sweet that’s actually healthy. One of my favorite hacks. Certain cinnamon roasted veggies have a relatively crunchy texture when roasted well, particularly cauliflower and eggplant, and I wondered if I could use those as a “cereal” replacement. 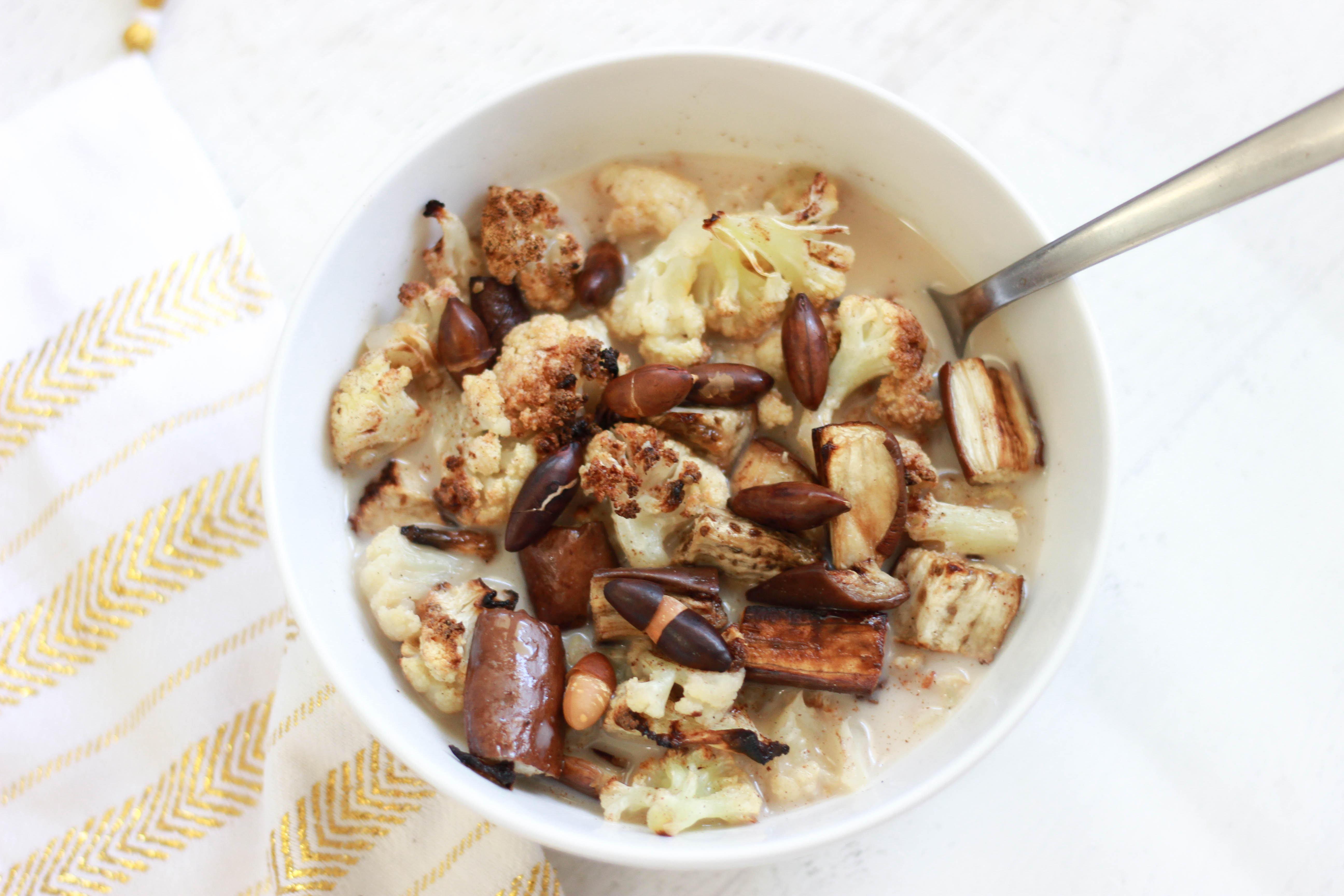 I decided to try it out and mix in some nuts for an added crunch. It was delicious! I like this approach much more than filling a whole bowl with nuts (which I see many people doing), which I would argue is not ideal for anyone’s digestion. This way you still get the crunch of the nuts but that’s not all you’re eating. I used Barukas, which are my favorite nut/seed because they taste like peanuts with a slight undertone of coffee and cacao. (My discount code “wellness” will get you 15% off your first order!) I also added in some collagen peptides for added protein, and ended up topping it off with some almond butter too! I put it all in a bowl with a cup of almond milk, and it was EXACTLY what I wanted!

The cinnamon roasted eggplant and cauliflower were crispy enough to give a bit of crunch, and obviously the nuts even moreso. It was enough like cereal for my palette, and I quickly became obsessed. I also love how this is such an easy meal or snack to pull together quickly. You can roast the veggies ahead of time, and then just throw them in a bowl with milk and your other add-ins in the morning! I recommend making a full batch of cinnamon-roasted veggies, and then you can use however many you want in your “cereal bowl.” 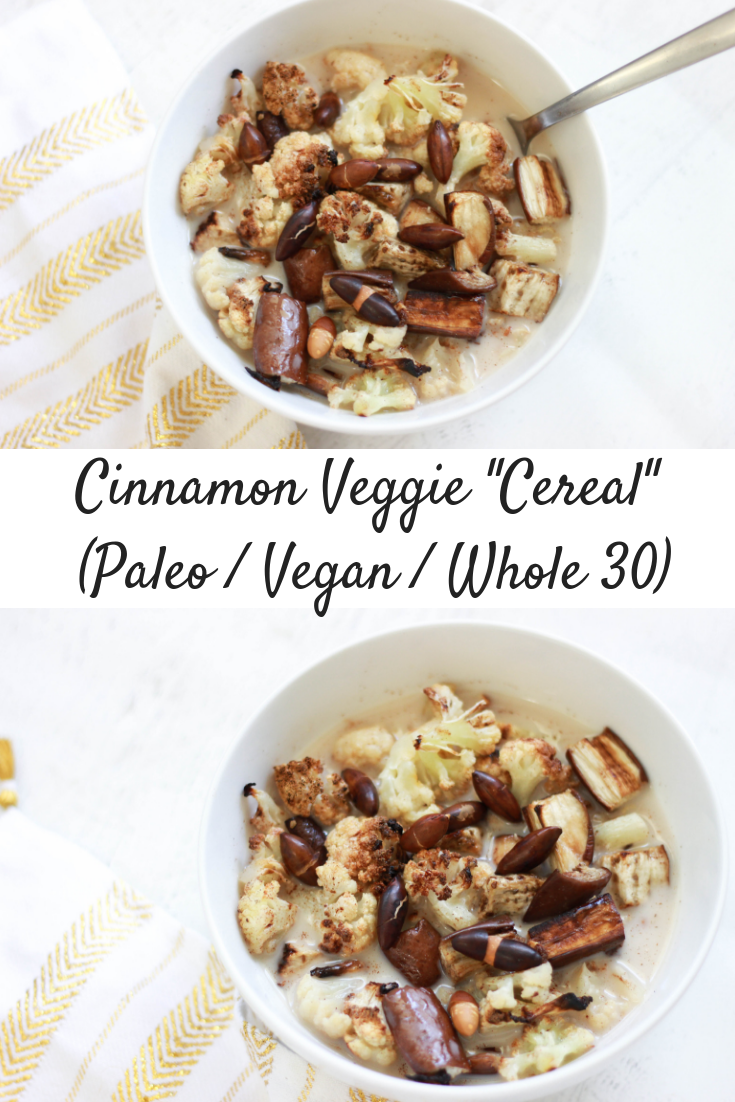 Once the veggies are prepped, it’s pretty much an instant meal, but you do have to prep the veggies ahead of time. You want to have plenty of time to roast them so that they get crispy on the outside for that crunch factor! I do not recommend steaming or sautéing the vegetables, because they’ll get too soft and won’t have the right texture. I’ve had this meal with the vegetables warm out of the oven, cooled to room temperature, and out of the fridge. I like them best cooled to room temperature or cold out of the fridge for true “cereal vibes.” When the veggies are warm, it doesn’t taste the same.

You can play around with different spices (pumpkin pie spice and apple pie spice have been in my rotation), different nut milks, different nuts and seeds, and different nut butters to mix-in. I tend to use almond or coconut milk, and Barukas or pecans as my nuts. I like dropping coconut butter in there too, because it hardens!

It might not be “real” cereal, but it hits the spot for me! This is a great paleo, vegan (if not using collagen peptides), Whole 30, keto, low-carb, candida-diet-friendly, gluten-free, dairy-free option for a breakfast or snack when you’re craving something like cereal but want something healthy. Don’t knock it until you try it! ;P 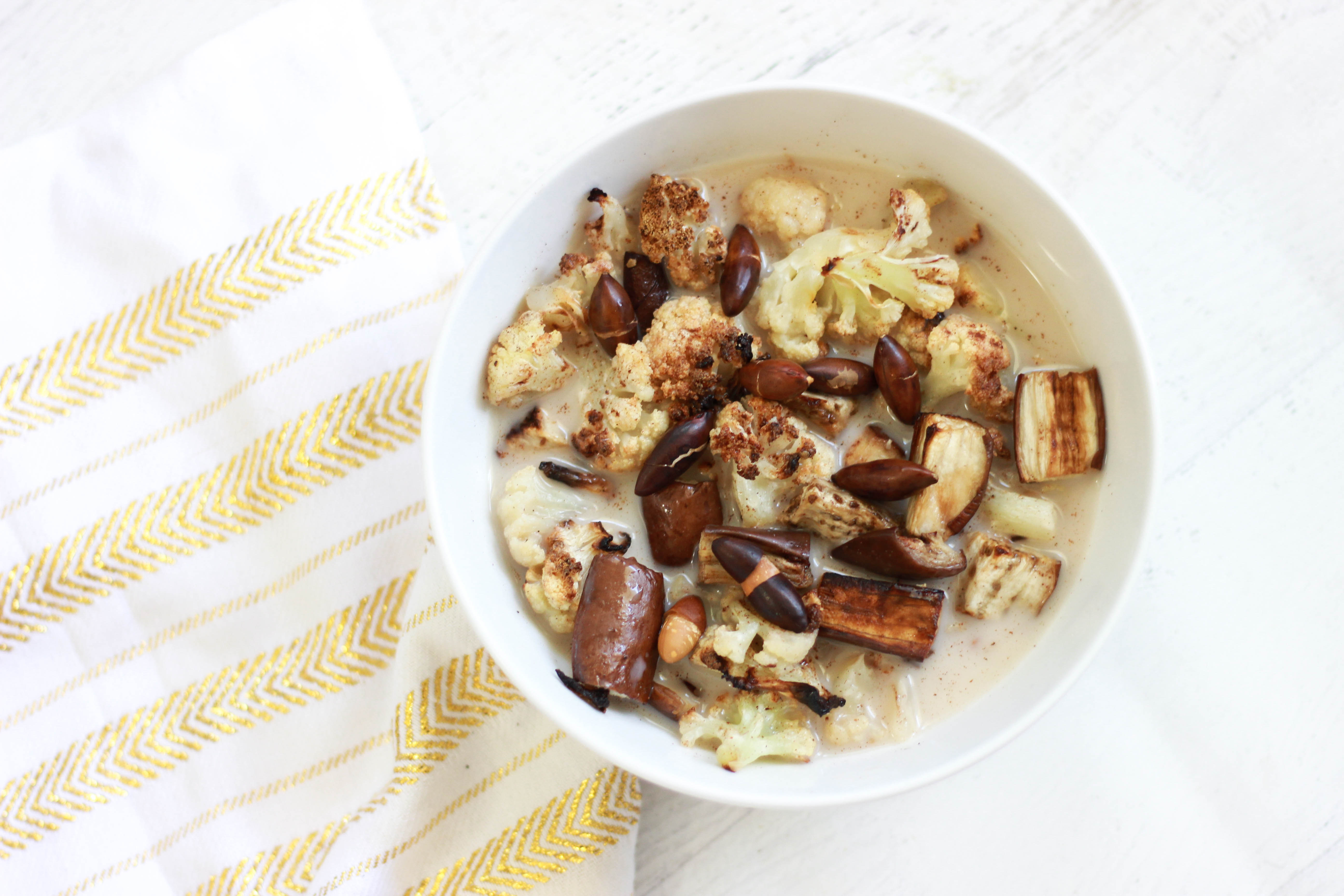 What was your favorite childhood cereal?!