Why I Eat Raw Meat – The Raw Paleo Diet 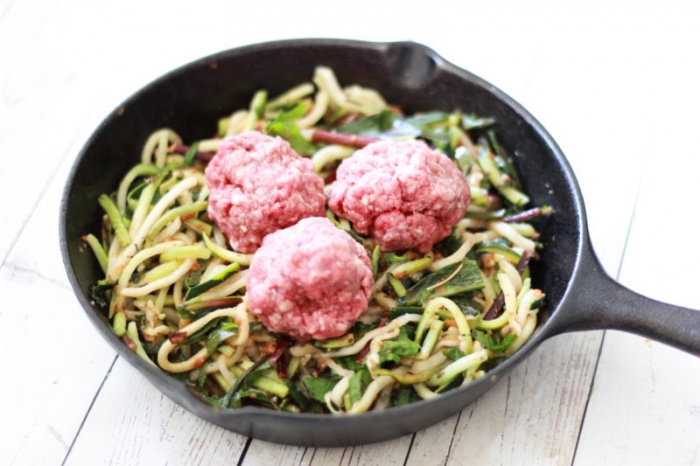 This post might seem like it’s coming out of nowhere, but I promise it’s not. I’ve been dying to write about this for awhile, but I didn’t want to share it until I had done self-experimentation for long enough to really be able to tell how it’s been working for my body.

I also want to preface this with some classic, but always necessary, disclaimers. I want to remind you that the purpose of my blog, and this post, is to share my personal experiences with you. This is not medical advice. I’m not telling you to do anything I do or recommending you do anything I do. In general, posts on the Internet should be taken for what they are – just information and sharing. Not treatments or diagnoses or direct orders. I’m just sharing something that I’ve discovered works for my body. I am not responsible for what you do with your body, and what works for me won’t work for everyone else.

That being said…what’s been working for me? 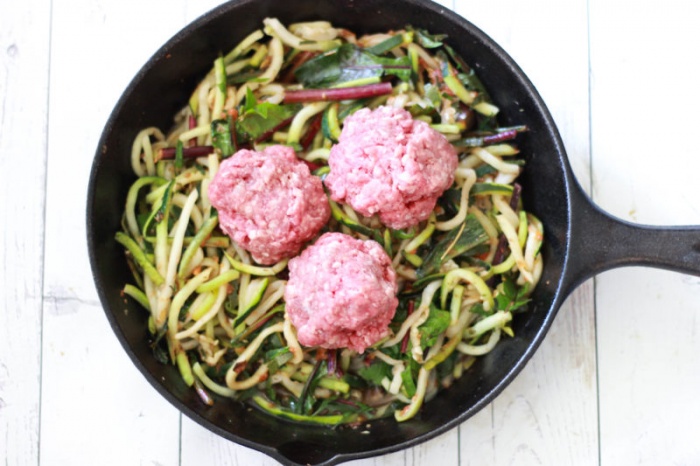 I have been eating raw meat.

If you’ve been following me for awhile, you’ll already know I lead a paleo/primal lifestyle. However, it wasn’t until very recently that I tried eating raw meat. I became intrigued with the raw paleo diet because it’s something my NTP has written about, and through her I’ve stumbled across a few other people who eat raw paleo as well. One of those people is Melissa Henig, who I consider to currently be the “face of” raw paleo right now. By that, I mean that she’s talking about it openly and bringing it to a more mainstream audience, so I would definitely head to her website to learn more about the raw paleo diet if you’re interested. She was also recently interviewed on Ben Greenfield’s podcast and talked all about the benefits of her raw paleo diet. If you’re interested, check out that episode here – I loved it! 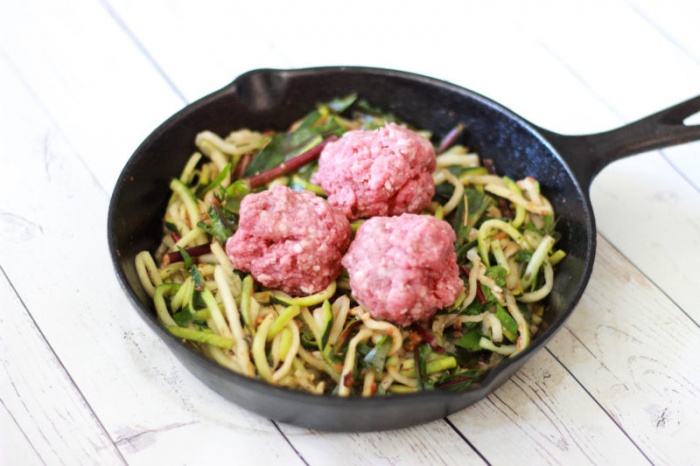 If you’re confused about what the raw paleo diet is, it’s exactly what it sounds like. It’s the paleo diet, but raw. So the typical paleo outline – no grains, gluten, legumes, sugar, soy, etc., but everything is left unheated. People who follow the raw paleo diet eat raw eggs, raw meat, raw chicken, raw fruit and veggies, raw unpasteurized dairy, and any other paleo foods…just raw. While I haven’t personally been following the raw paleo diet exclusively, I have been eating raw meat. 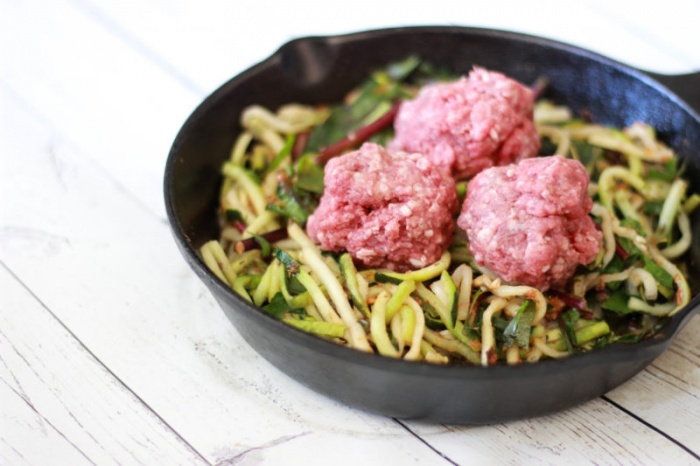 Before I actually tried raw meat, I did a lot of research. I interrogated my NTP about it, because I had so many questions. Is it really safe? If it’s safe, why don’t more people do it? What’s the point? What are the benefits? How will this affect my digestion? Is it really raw? After talking with her and reading a lot about raw paleo, I became very intrigued and finally decided I was ready to try it out. That’s the wannabe biohacker in me. When I’m curious enough about how well something “works,” I’ll always try it out on myself. My own personal experience is what I care about most. 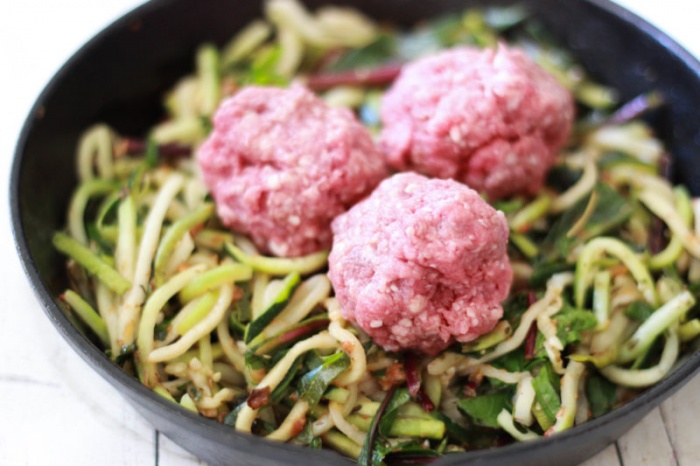 I slowly came to understand that mainstream society has it backwards in terms of how to cook our food for optimal digestion. If you use google or ask a random person on the street, they’ll probably tell you that the “best way to eat” is to eat lots of raw vegetables and cooked proteins. Turns out, cooked veggies and raw proteins are actually easier for our bodies to digest than the other way around. 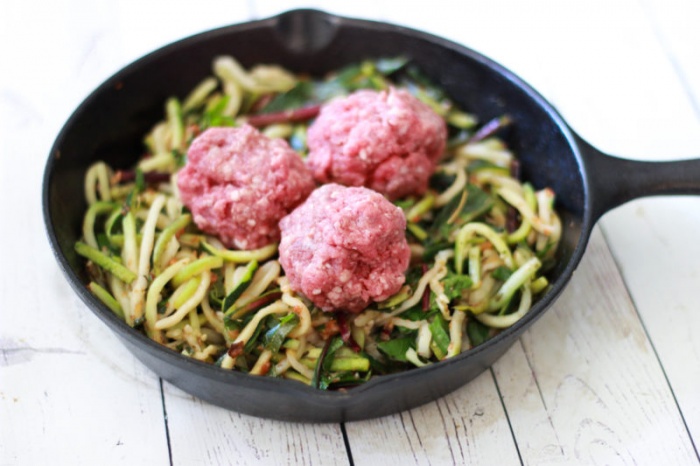 When it comes to protein, however, raw meat is actually much easier for our bodies to digest than cooked. Think about it logically. Raw meat has always been a part of our ancestors’ diets. Raw meat has been a staple in the diets of different cultures around the world for centuries. You probably don’t think sushi is weird, right? It’s the same thing. What about steak tartare, or ceviche? If you’ve traveled to other countries, you’ve probably come across some kind of raw meat – maybe even seared. And again, sushi!

There are other aspects of the raw paleo diet that you probably wouldn’t think are that strange – raw dairy, for example. Raw milk and cheese. What about raw eggs? I know it’s not for everyone, but there are many people who toss raw eggs into their smoothies! And I KNOW you’ve eaten raw cookie dough before. (That’s not the raw paleo diet, obviously, but you get my point!)

When we cook meat, it actually destroys a lot of the enzymes found naturally in that meat that help with the digestion process. When it’s raw, all of those enzymes remain intact, and the nutrients in the meat are more bio-available. This can have a number of effects on how most people feel when they eat raw meat, and I experienced them all. 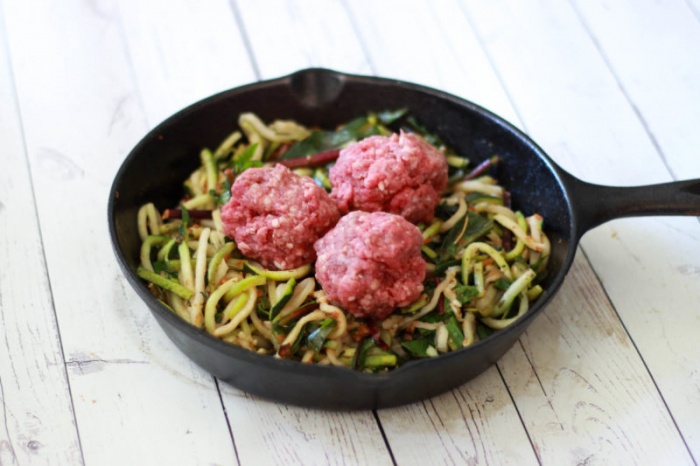 Second, it takes a lot less meat for me to get full. The nutrients are just so available to the body that I feel satisfied with much less protein. I’m usually satisfied with about half the amount I would have to eat if the meat was cooked. This ends up saving me a lot of money, because I don’t have to eat quite as much for satiety!

Third, it gives me an insane amount of energy. I don’t drink caffeine, but this is basically my version of the energy boost. Sometimes I don’t like eating raw meat at night because I feel like it keeps me awake for longer. I really don’t know how else to describe it  – it just gives me a ton of energy and mental clarity. I love it.

When I read about my NTP’s experience with the raw paleo diet, I thought it was really interesting when she said that she truly craved raw meat after trying it for the first time. And after I tried it, the same thing happened to me. It’s like my body just wants it. NEEDS it. It’s something I crave all the time now, which tells me my body loves it. It makes me feel good, and I love the taste, so I’m sticking with it. 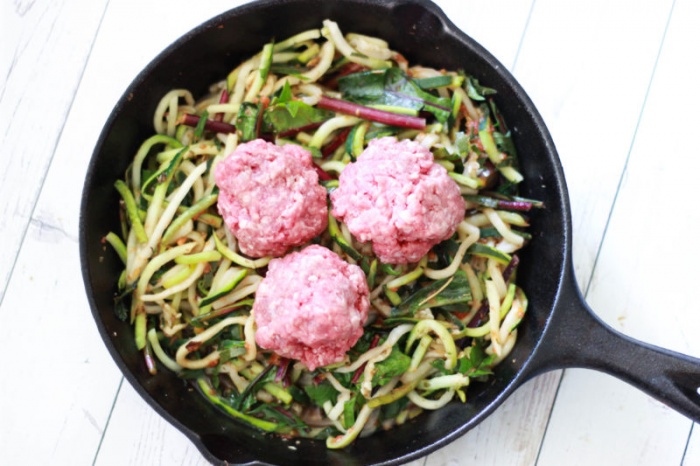 The most important thing when it comes to eating raw meat is the sourcing. I do not just go to the grocery store, buy some meat, and eat it raw. I will probably get very sick if I do that. Sick animals make us sick, but healthy, well-raised ones do not. I only eat grass-fed, grass-finished meat that I get from the farmer’s market, and I also don’t let it sit out on the counter. I usually freeze the meat for a week or two just in case, and then I let it thaw in the fridge right before I want to eat it. Then I keep it in the coldest part of my fridge and eat that batch within the next day or two.

That’s another thing I love about raw meat – it’s super fast. You literally just take it out of the fridge and eat it – no prep required. This might sound weird, but I also love how primal I feel when I eat raw meat. Kind of like when you eat a huge drumstick and just go for it. It’s like I’ve tapped into my primal instincts! 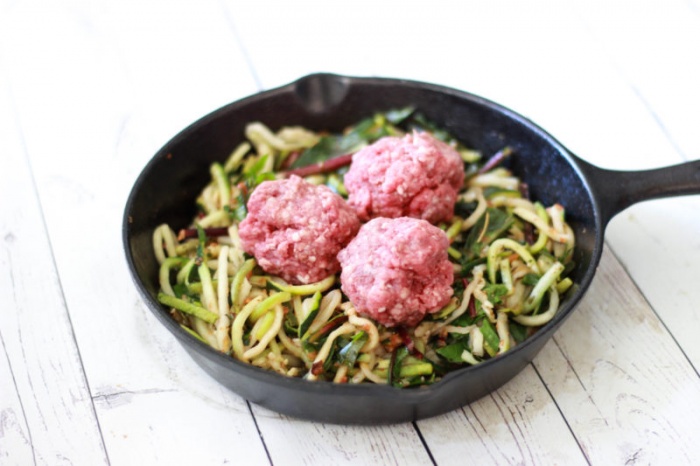 One question I always get asked is about the taste. Obviously I can only speak for myself, but I love the taste, especially of raw lamb. That’s my favorite thing to eat and what I eat most often. It tastes…cold. Ha. And like… raw lamb. I can’t really describe it, but it’s really not that different from the taste of cooked lamb, in my opinion. It is a different texture than cooked meat. Kind of gummy, chewy. I personally love it. Like I said, I crave it. 😉

How do I eat it? There are a few different ways. You can eat it plain, you can let it soak in lemon or lime juice, or you can mix it with oils and spices. When I eat ground lamb, I usually either eat it plain, dolloped on top of my food, or I will mix it in with spices and a bit of fat. The zoodles in these pictures, for example, are plain, but a lot of times I like to make “meatballs” by mixing the meat in with basil, oregano, rosemary, and a little bit of lard. My version of raw pasta.

I don’t follow a raw paleo diet, I just incorporate raw meat into my diet. I’ve been doing this regularly for a few months. I was worried at first, but after that first day, I kind of became obsessed. I don’t eat raw meat every single day – it’s something I would only do when I know the source of my meat and when I’m eating at home. I know it’s not for everyone, and that’s fine! I just wanted to share my experience because it’s such an interesting topic, IMO. If nothing else, maybe you’ll be inspired to keep an open mind and do some research of your own!