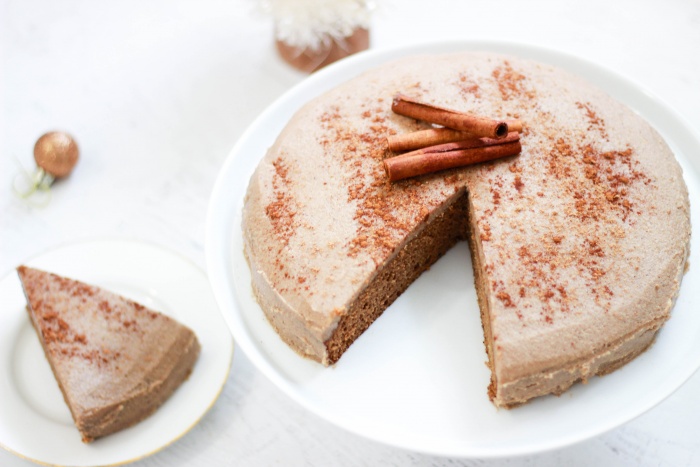 Growing up, I really hated eggnog. Every year my uncle would try to convince me to drink it, and I’d turn up my nose. I’d always try a sip, though, hoping I would like it. Eggnog is so Christmassy, and I wanted to join in on the Christmas fun. I liked the ritual of going to the grocery store the day before Christmas Eve specifically to get some holiday nog. As much as I wanted to love it, the taste just didn’t do it for me. 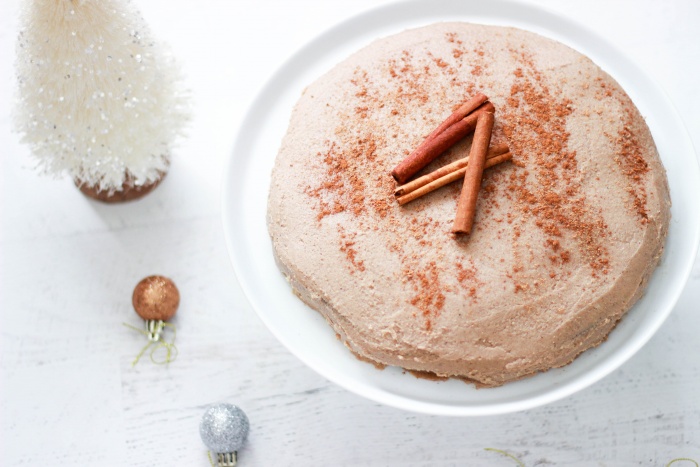 Then, magically, a few years ago I tasted eggnog again and became completely obsessed. It’s funny how our taste buds mature. The eggnog was rich, creamy, and unlike any other drink I had ever tasted. I could never drink a whole glass, though. As much as I love eggnog, it is very heavy, and, like I said, extremely rich. And for me to think that something is too rich — that’s really saying something. 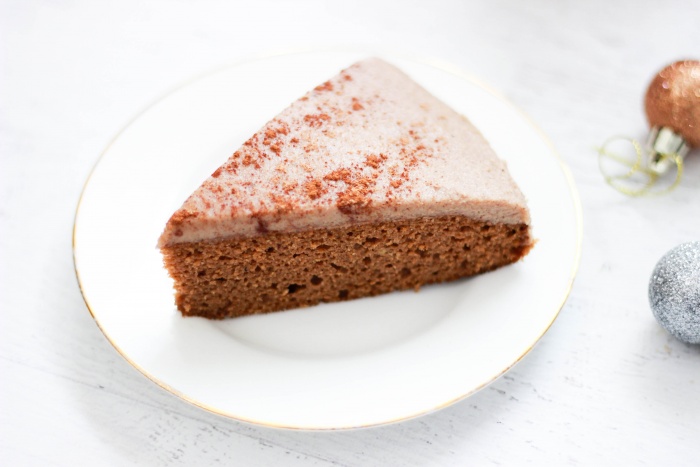 Last year I stumbled across a photo of eggnog cupcakes on Pinterest, and I immediately wanted to make an eggnog spice cake. How good does that sound?! The problem is, though, that a lot of other people in my life really don’t like eggnog, the same way I used to not like it. It’s a very polarizing topic. Kind of like politics. Just kidding. Anyways, I hate to make a whole cake when no one in my family will eat it except me. 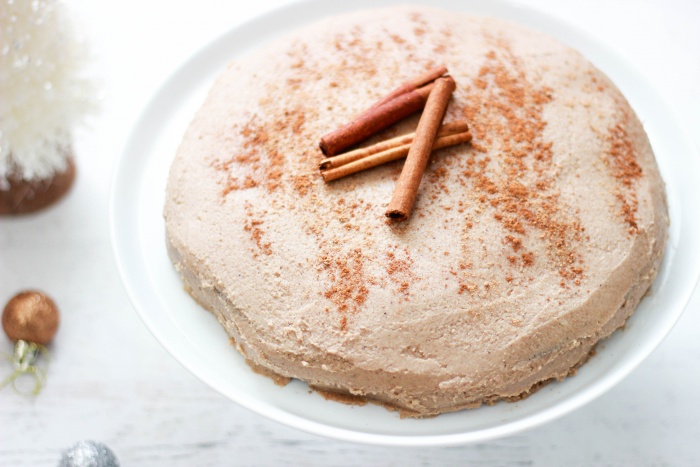 What I realized, though, is that the cake version of eggnog is the perfect compromise. The taste isn’t quite as intense as plain eggnog, and the flavor comes out perfectly in cake form. Eggnog spices were basically meant to be in a cake. I think that part of the reason people don’t like eggnog is because it feels like “too much” to down a really heavy drink all at once, but a little bit of heaviness comes across as richness when it’s in a cake. Because of that, I was pleasantly surprised at how many people who don’t even like eggnog fell in love with this cake! 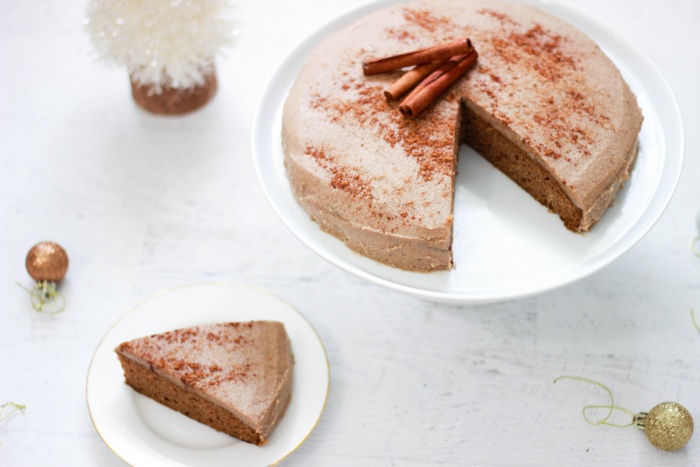 This cake is kind of a contradiction. It’s an eggnog spice cake, but there’s not actually real eggnog in it. It’s a completely gluten-free, paleo cake, and I used paleo eggnog to make it. I do this kind of thing to prove to people that food can be gluten-free and dairy-free and you would never know the difference. It tastes like there’s legit eggnog in here, but there isn’t. 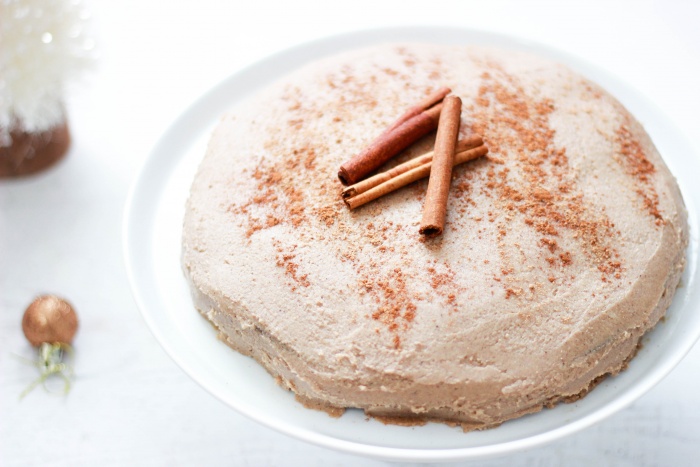 This cake is a little more complex because it requires an extra step – you gotta make the eggnog first! However, I promise the eggnog is really simple to make. If you’re really lazy, you could probably just use Califia Farms Holiday Nog, which you can find at Whole Foods. I haven’t tried it, but I’m pretty sure it would work. I’d rather make my own, though, because I don’t really like cane sugar. Or, if you don’t care about the cake being dairy-free, you could definitely try using real eggnog! It will taste the same. 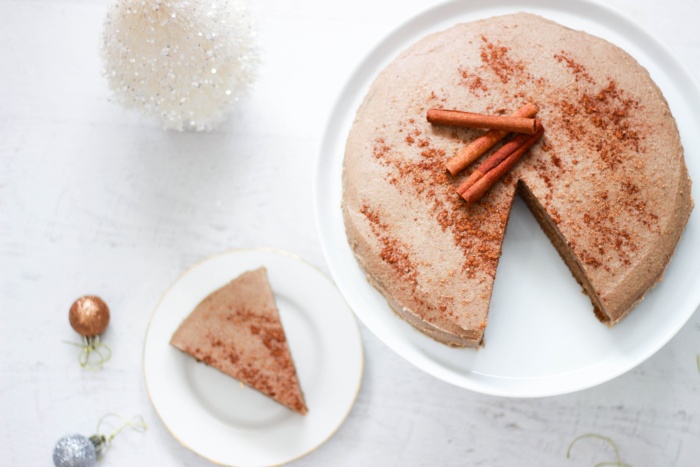 I wasn’t completely sure how the cake would turn out, but as soon as it came out of the oven I knew I had created magic. I adore this cake almost as much as I love Christmas itself. 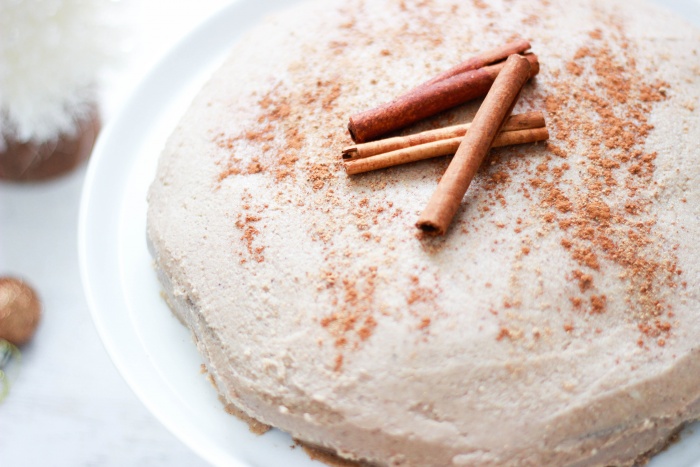 First of all, let’s talk about the taste. Like I said, it honestly tastes like eggnog in cake form. My sister called it “deliciously unique,” which is really saying something coming from her! It’s also the perfect amount of sweetness, in my opinion. I don’t like cakes that taste like artificial sweetener and cane sugar and plastic frosting. This cake tastes real. It’s sweet enough to be a perfectly satisfying dessert, but not so sweet that you’ll get a massive stomachache and a huge sugar rush afterward. 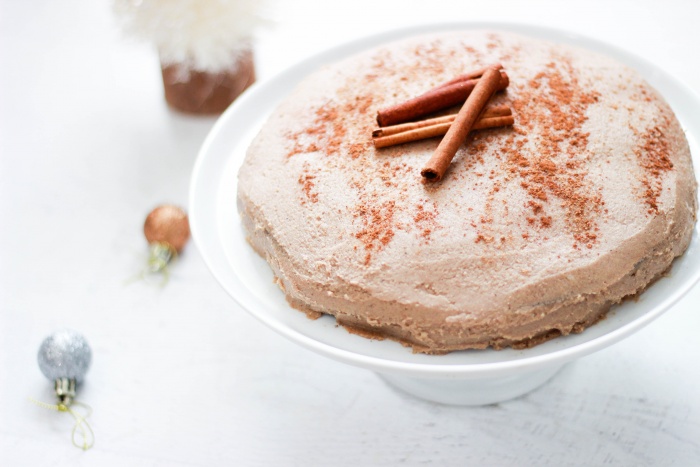 Next, texture. This cake is extremely moist, creamy, and dense. You know how really good banana bread is moist and dense and thick and wonderful? It’s like that, but in cake form….and if banana bread tasted like eggnog. Plus, the creamy spiced frosting completes it perfectly. 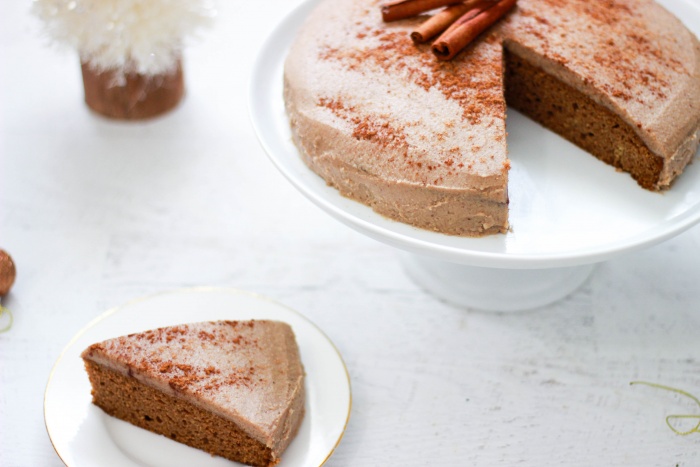 The cake lasts well either at room temperature or in the fridge (if you don’t eat it all in one sitting). I actually preferred it cold out of the fridge, though. On the other hand, my sister liked it heated up in the microwave the day after. Basically, you can go either way. If you want the frosting to be hard, I’d recommend storing it in the fridge. 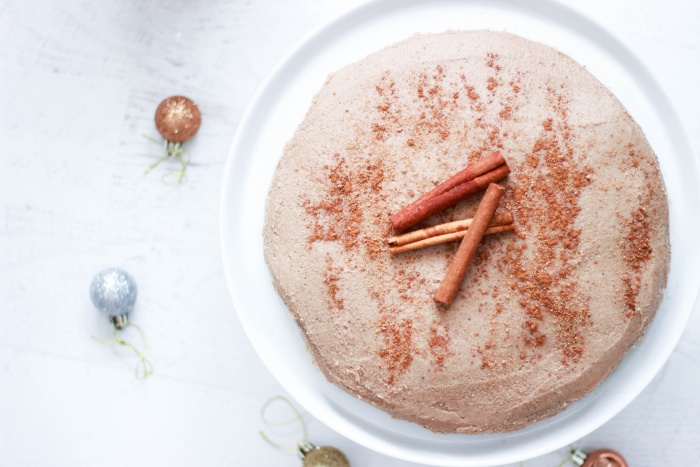 Also, I highly recommend dolloping some paleo vanilla ice cream on top if you have it. So good. 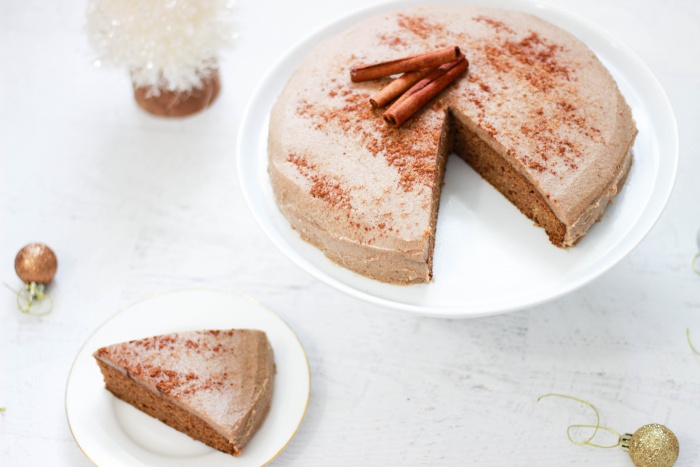 If you like eggnog, you’ll love this. If you don’t eat dairy, then you can still join in on the fun! I never want eggnog season to end. This cake is gluten-free and paleo, but I guarantee everyone will love it! It’s the perfect holiday cake! 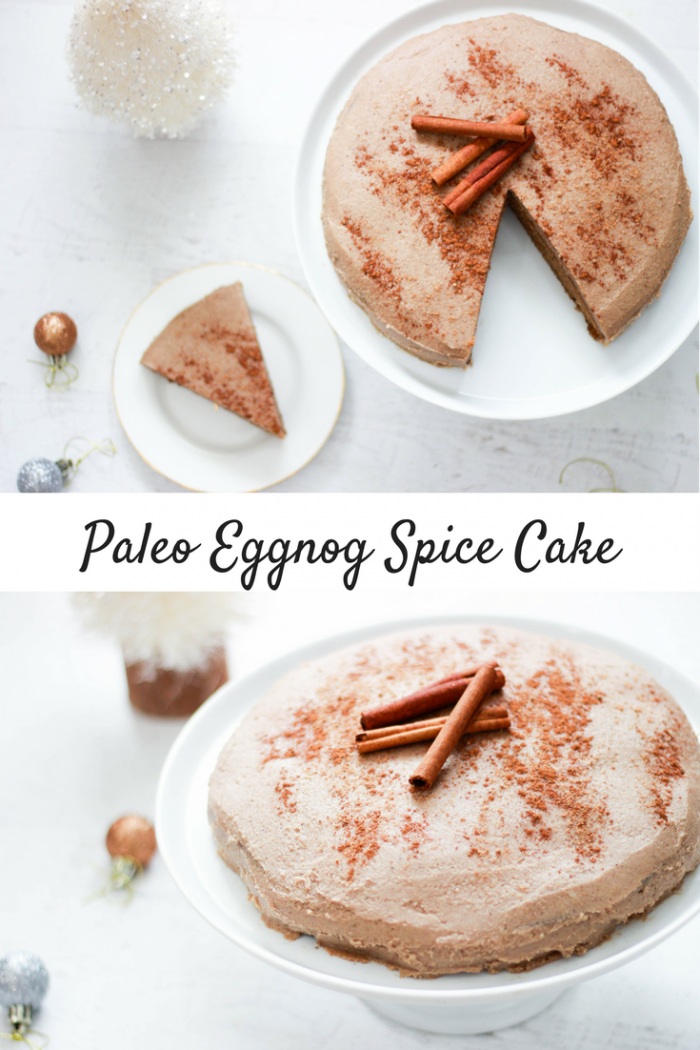 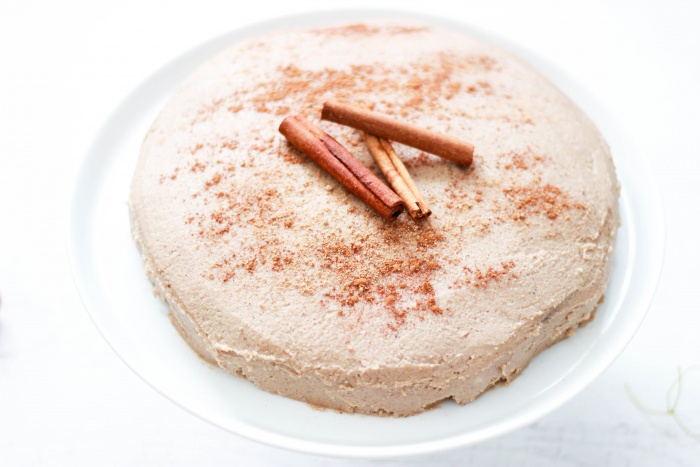 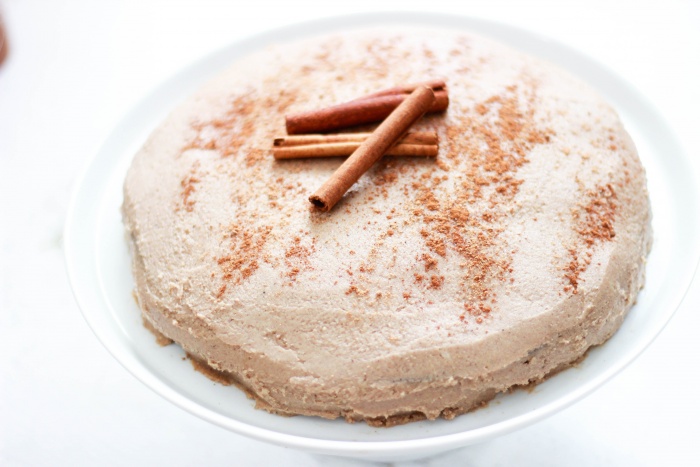 Have you ever had an eggnog cake?! If you try this recipe, be sure to tag me in any photos and let me know what you think! 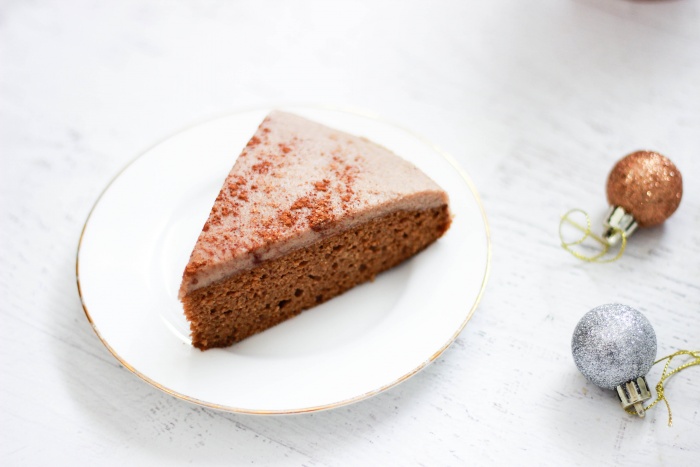