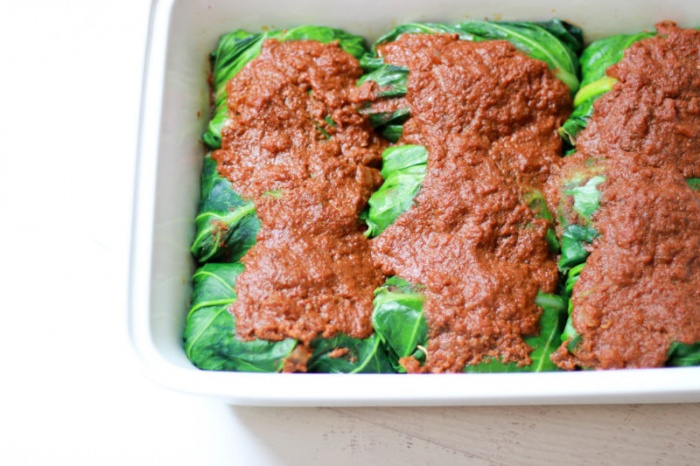 WHO’S READY FOR A FIESTA?! 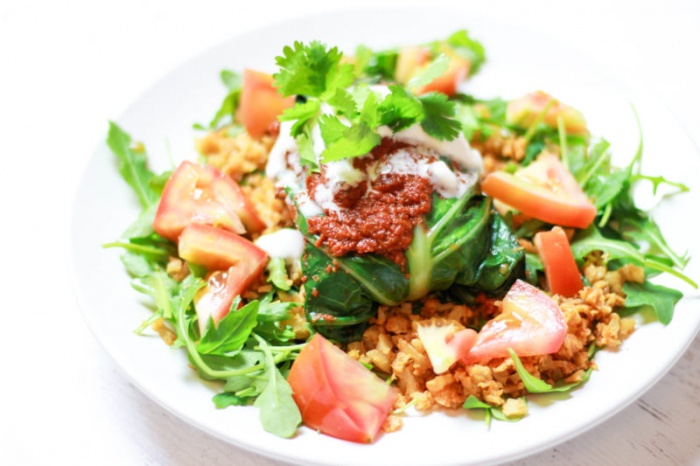 I cannot tell you the last time I had an enchilada. Actually, I can. It was a crappy chicken enchilada from the Mexican to-go restaurant by the dorms at UCLA. They only served enchiladas one day each week, and I always looked forward to enchilada day. I ate the same meals over and over again every other day of the week. Sadly, though, they weren’t very good enchiladas. They were soggy and tasted artificial. It wasn’t real Mexican food. It was dorm food. Beggars can’t be choosers, though. 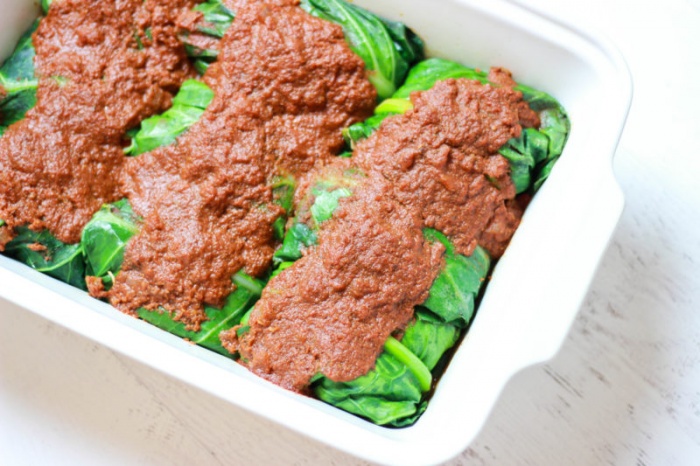 Anyways, the very last time I had an enchilada was after a few weeks of turning my diet around and actually eating healthy food. After a few weeks of “clean eating,” downing that soggy dorm enchilada made me feel… not so great. My stomach was not happy with me, if you know what I mean. 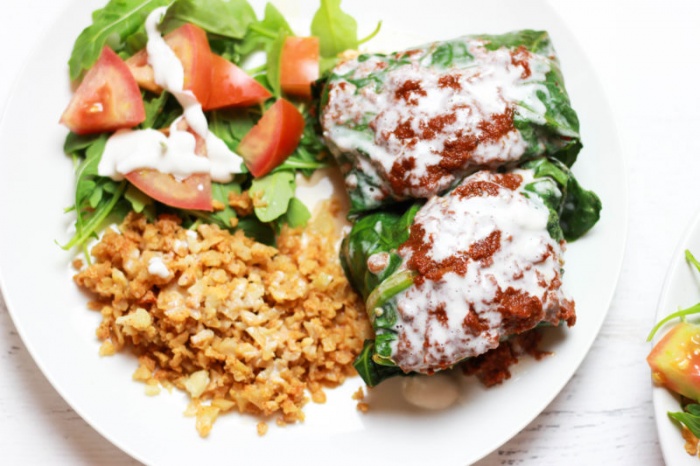 After that, I avoided Mexican food for awhile. At least until I could get a handle on my digestive issues and overall health. When things calmed down a bit, I learned that Mexican food is actually one of the easiest things to eat when you’re gluten-free. Authentic Mexican restaurants usually use corn tortillas, and beans and rice are gluten-free. A loaded salad at Chipotle was always an option on the go. If you’re new to the gluten-free life, Mexican food can be a great option when eating out! 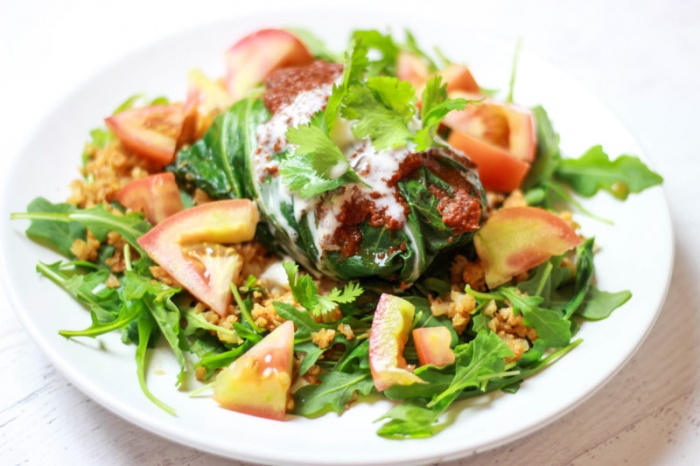 As time went on and my health issues persisted, I learned that beans and rice weren’t doing my digestion any favors, either. After I transitioned to a paleo diet, I ate Mexican food much less often. I can always order a salad at a Mexican restaurant, but I can’t usually get any of the “fun” Mexican food. You know, the dishes with pizzazz. 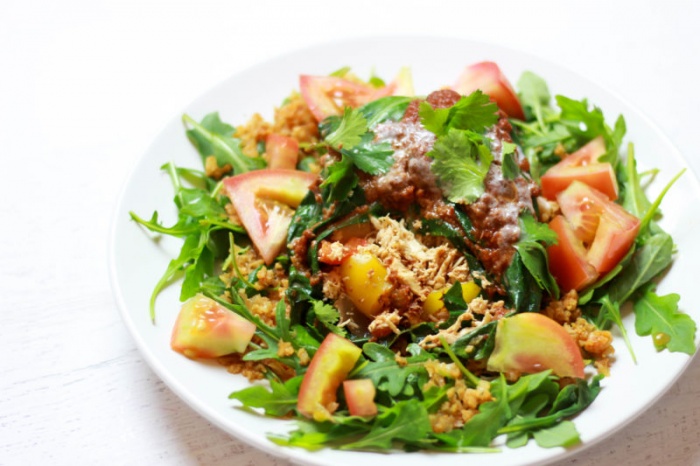 Enchiladas are a “fun” Mexican dish, by my standards. I never made enchiladas myself, so it was my favorite thing to order out. I can think of so many specific memories relating to enchiladas, as weird as that sounds. At the beautiful, outdoor Mexican restaurant in San Diego with my sister and her friends when she was leaving college, at the hole-in-the-wall shop with two of my co-workers at my first internship, at my favorite place in my hometown right after finding out I got into college, and so many more. Enchiladas stick out in my mind. The food, the memories…all of it. 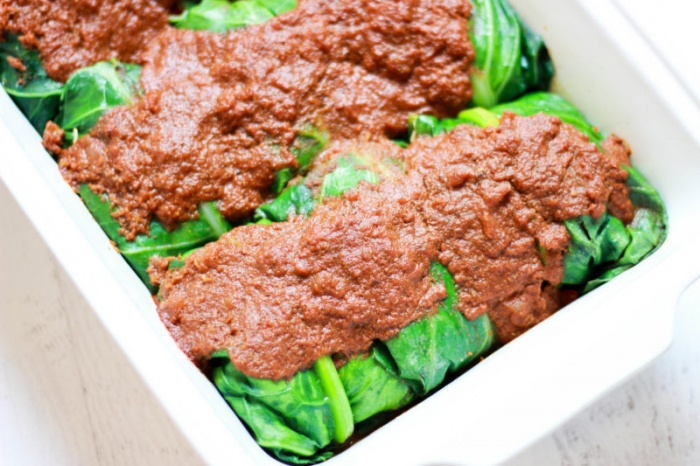 Anyways, like I said, in the past few years I haven’t really eaten any enchiladas. It wasn’t going to happen unless I made it. I missed the gloriously stuffed creation, the yummy sauce dripping down the sides, the bite of the sour cream melded in with all of the other textures and flavors. Enchiladas were on my mind. Obviously, it was time to satisfy the craving. 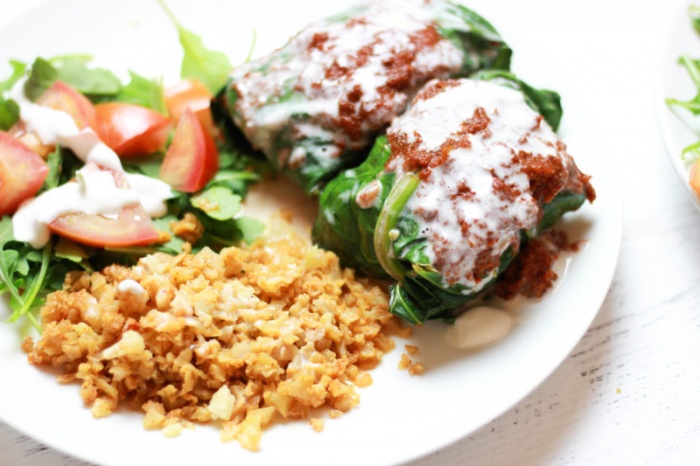 Unfortunately, this recipe isn’t a one pan kinda deal. There are multiple parts to it, but it’s worth it. And it makes a ton, so you’ll have leftovers. These are extremely healthy, paleo homemade enchiladas that are completely drool-worthy. You can also completely customize them to give them you’re own flair! 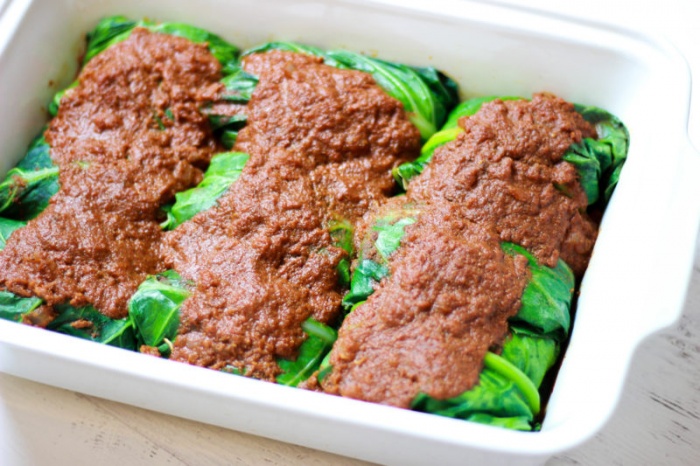 You can follow these steps exactly and include every part of the recipe, or you can just make some parts of it. The first part of the meal is the protein – I used shredded chicken, but you could also use beef or another protein. You could also leave that out and make vegan enchiladas with all vegetables! I love shredded chicken or shredded beef in this recipe though because it goes so nicely with the sauce! The key is to use the crockpot to cook the meat ahead of time. Crockpot chicken is so soft and moist – perfect for inside the enchiladas! You want to cook it on low verrrrrry slowly for the best results. 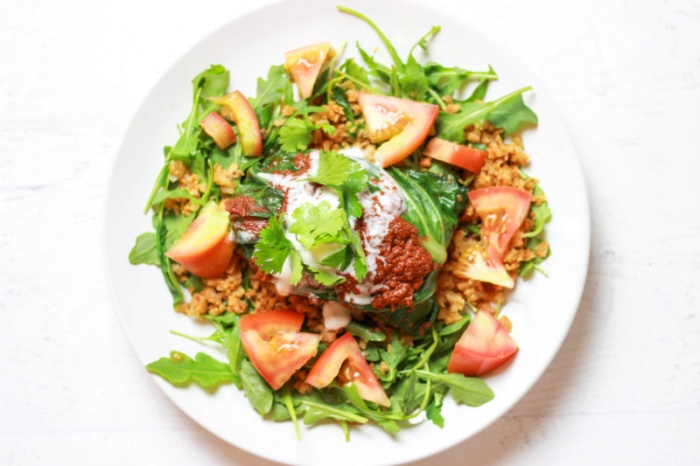 Then there are the actual enchiladas. You’ll need to prep the collard wraps, which is a super easy process. Collard wraps are one of my favorite healthy tortilla replacements. They hold up better than any other leaf, and it’s important to have something strong to hold all of the goodies inside of the wrap! Collard leaves do the job quite nicely. 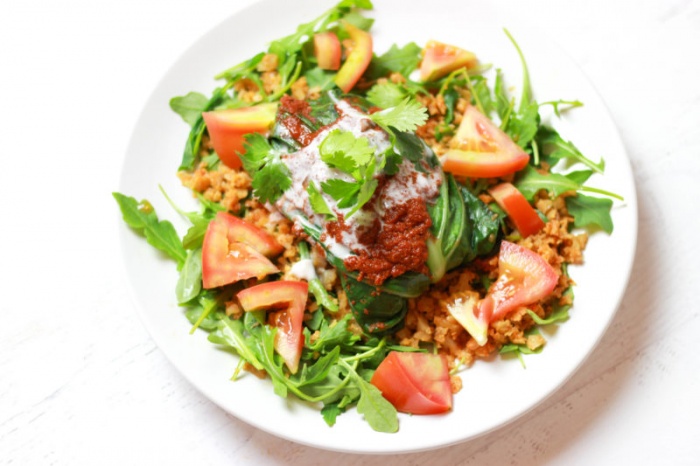 Like I said, feel free to use any vegetables inside the enchiladas that you want! I opted for bell peppers and onions, but I thought about using cauliflower rice or zucchini instead. There are so many options! You don’t want to put too much inside, though — make sure you can still roll it up! 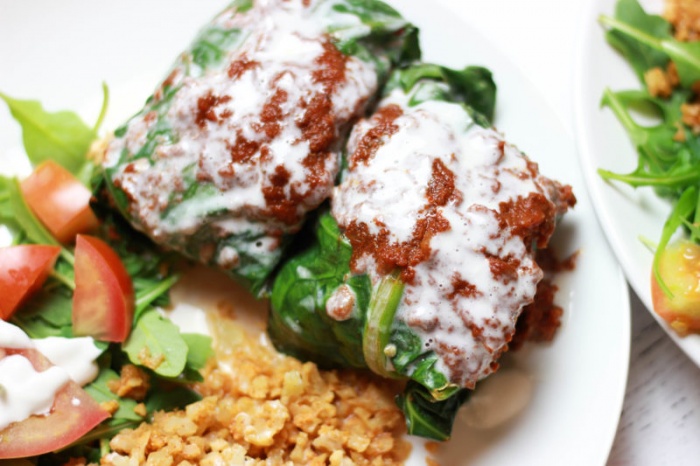 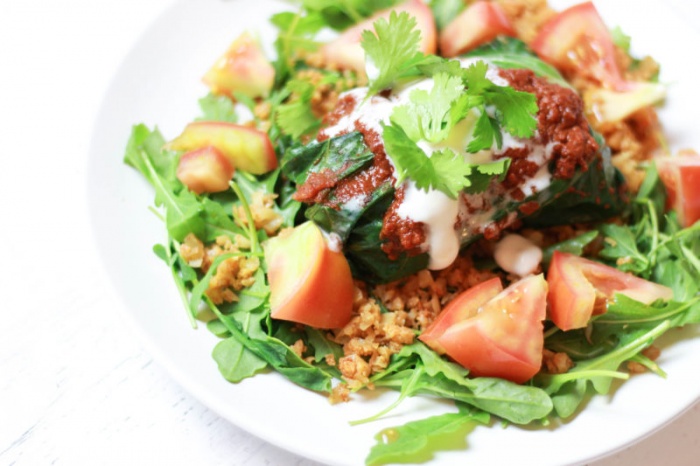 My other favorite part? The vegan sour cream. I usually make vegan sour cream with cashews, but since I can’t eat cashews right now while I’m on my elimination diet, I made it with coconut milk. It was so much faster than with cashews, and SO INCREDIBLY DELICIOUS. I’ve just been spooning the leftovers as a snack. Honestly, it tastes really similar to dairy. I can’t imagine anyone not loving this healthy sour cream… it’s addicting. 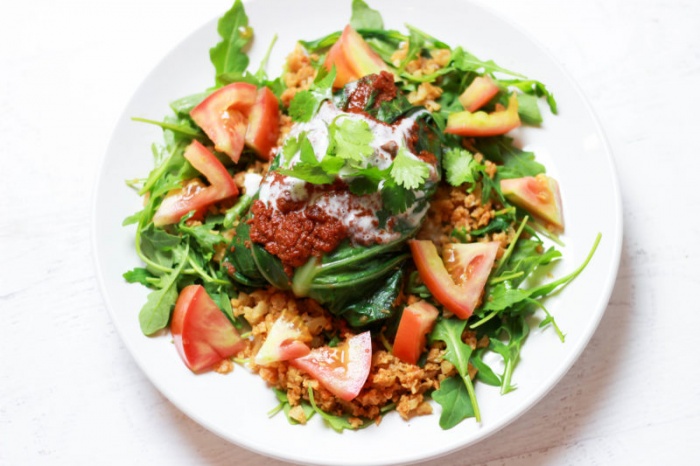 After that, serve it however you like! You can eat the enchiladas alone or serve them alongside other things. I served these with cauliflower rice, arugula, and diced tomatoes. It was a fiesta on a plate. And an even bigger party in my mouth! 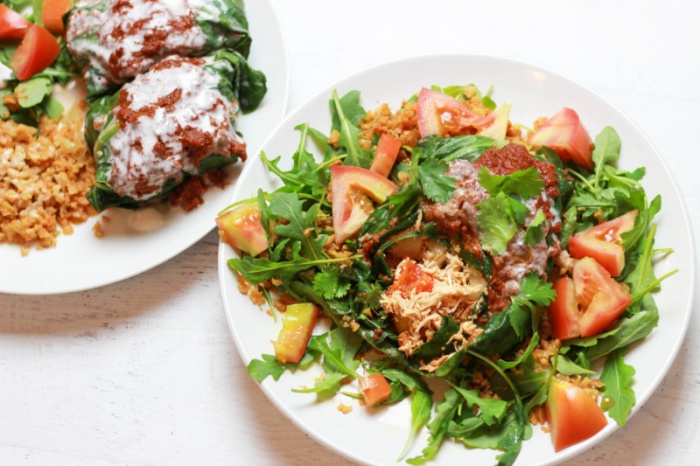 I’m practically bursting at the seams for you to make these because they’re truly all I can think about. Never have I wanted to get a recipe up on my blog so badly before! YOU NEED THESE IN YOUR LIFE. They are incredibly healthy, and absolutely mouthwatering. These are paleo, gluten-free, dairy-free, grain-free, soy-free, nut-free…all the goods. They can be made vegan if you don’t add in the chicken. You can remove the onions to make them low-FODMAP too, and they can be made SCD-friendly very easily. Any vegetables you don’t like can easily be replaced with vegetables that you do like! Remember, recipes are not rules. You can always adjust anything! 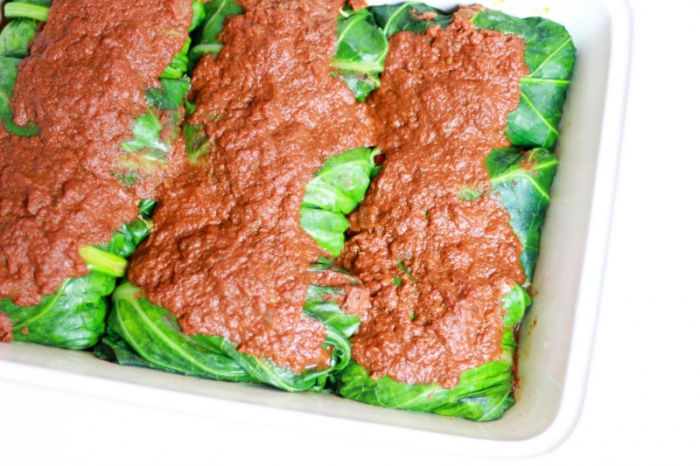 Although there are quite a few different parts to this dish, each part doesn’t take too much time to pull together. I’ll walk you through piece by piece. Pick and choose what you want to do. I hope you enjoy! (I sure did.) 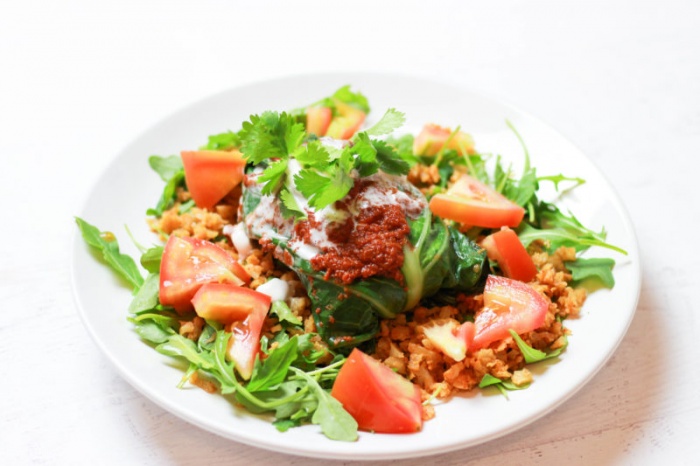 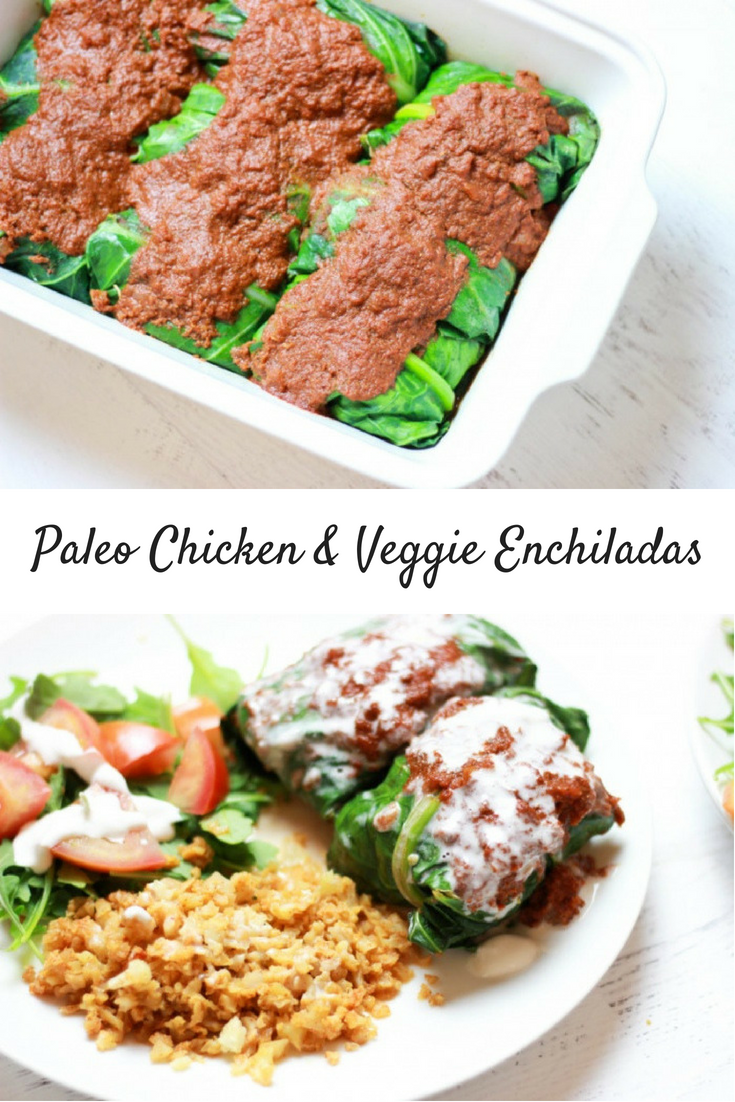 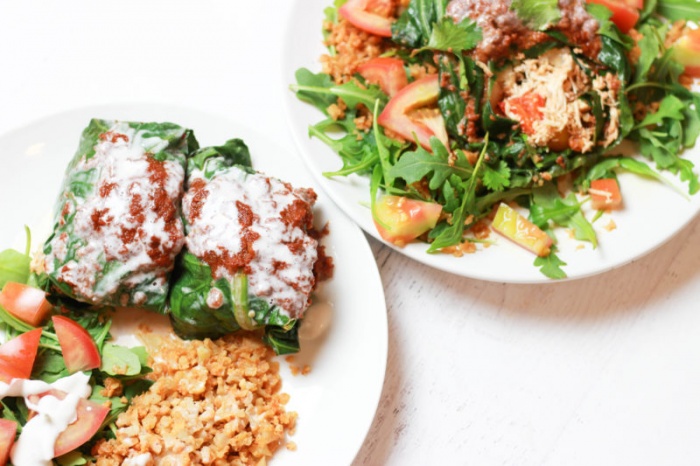 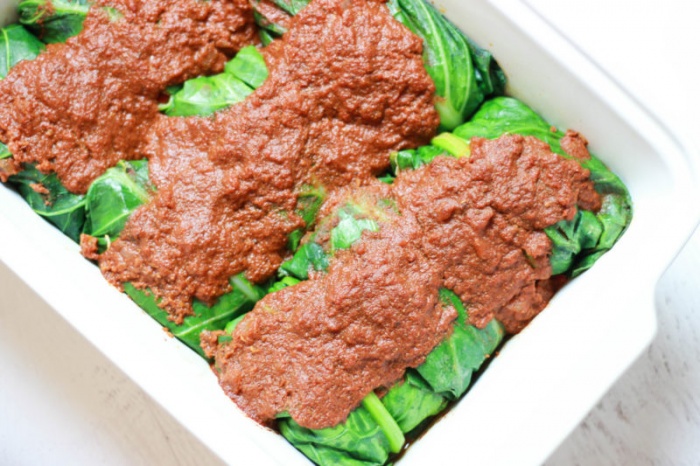 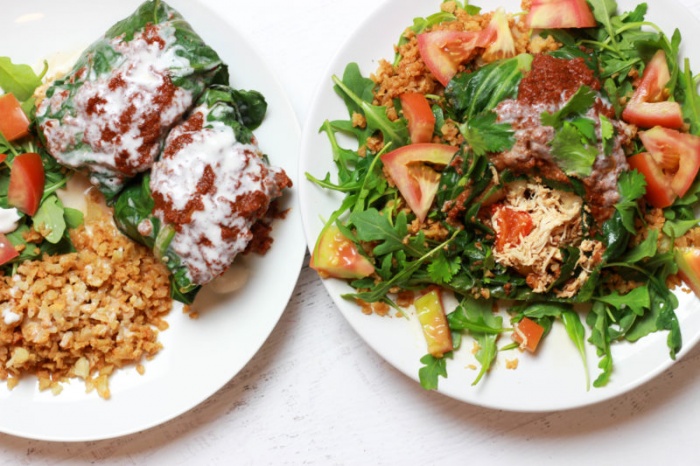 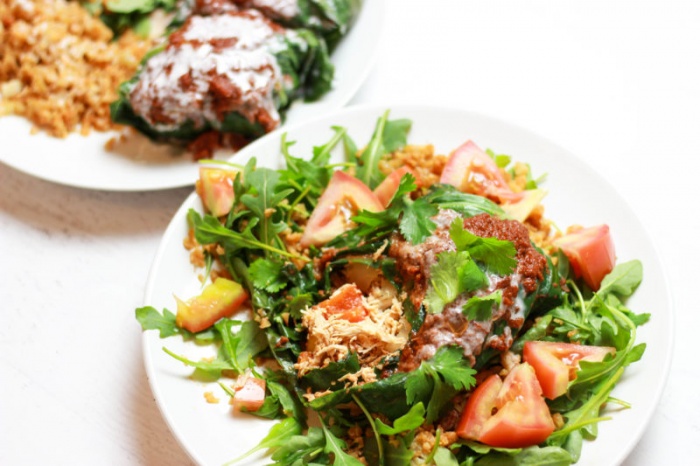 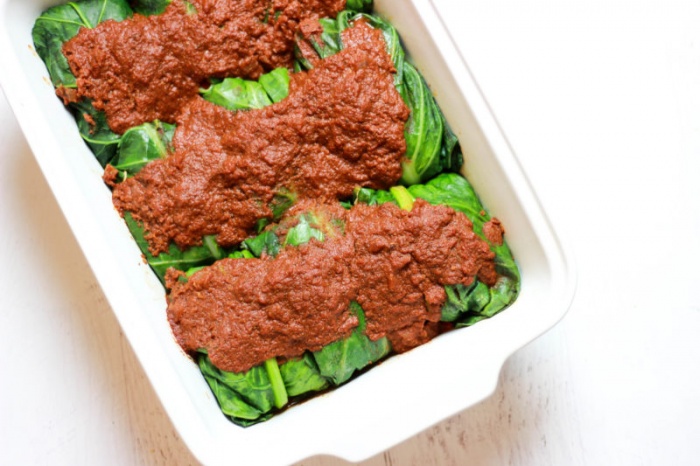 If you make these, I would LOVE to hear how you like them! Be sure to tag me in your photos so I can see! What’s your favorite Mexican dish?! 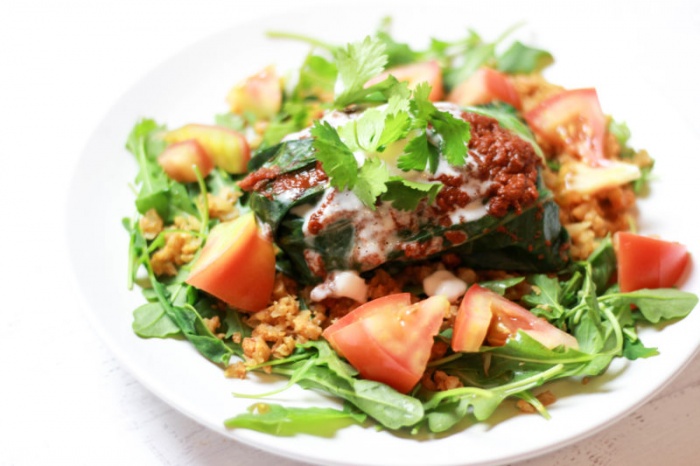