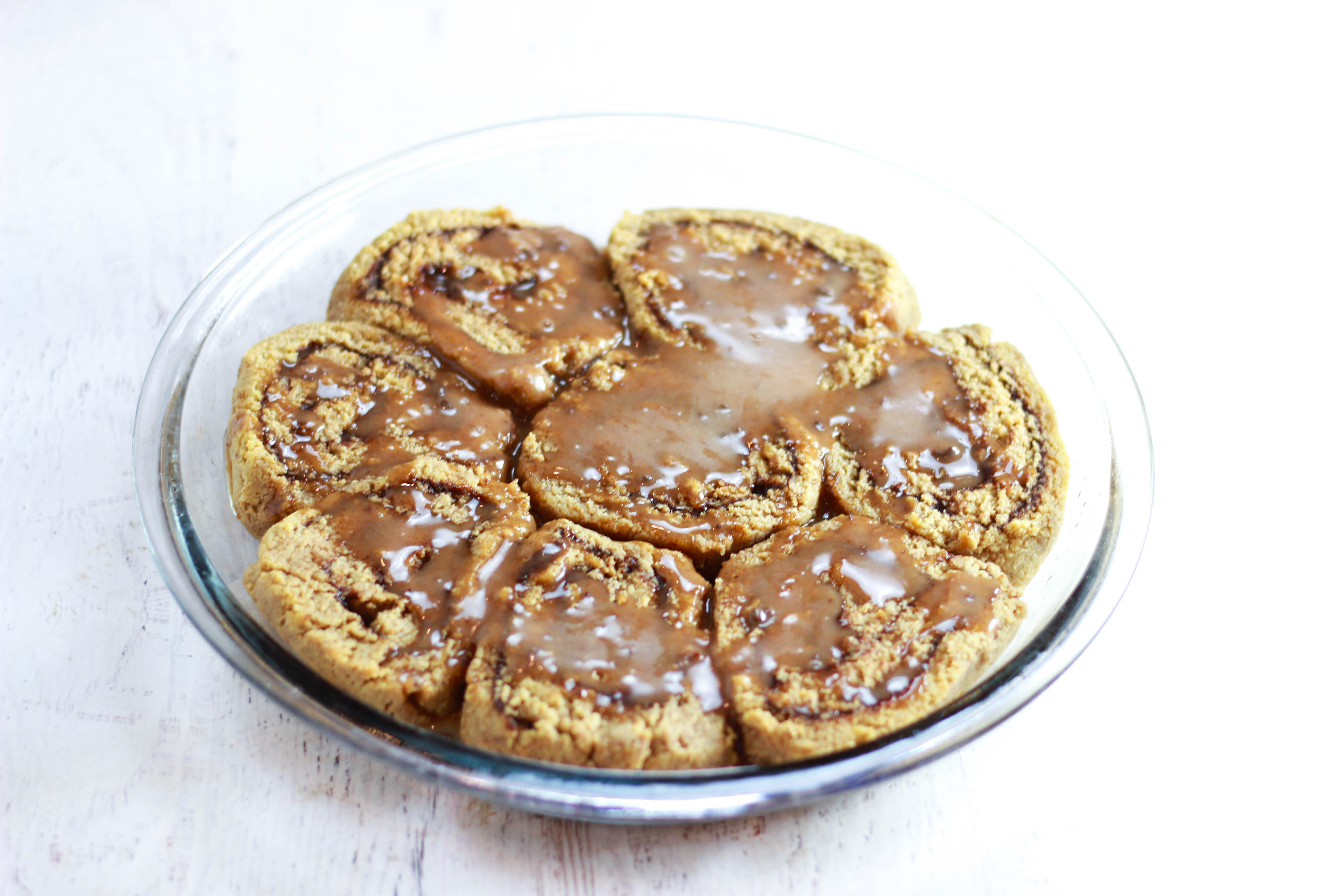 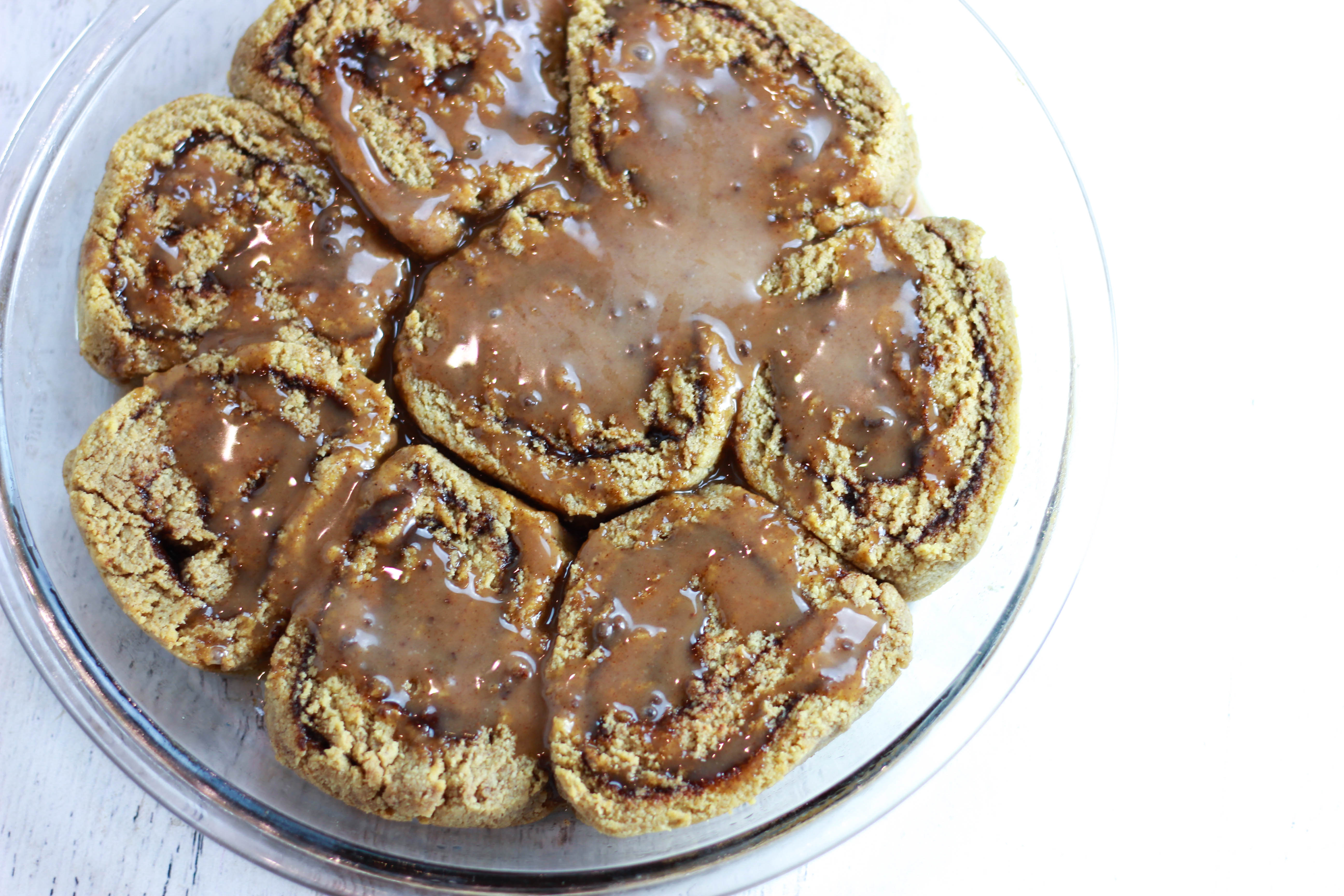 I have so many childhood memories related to cinnamon rolls, and I know I’m not the only one! Nothing made me more excited as a child than seeing a container of Pillsbury Cinnamon Rolls in the fridge. My mom would try to hide the container behind other food and put them on the top shelf so I wouldn’t get into them before she made them – can’t fool me, though. 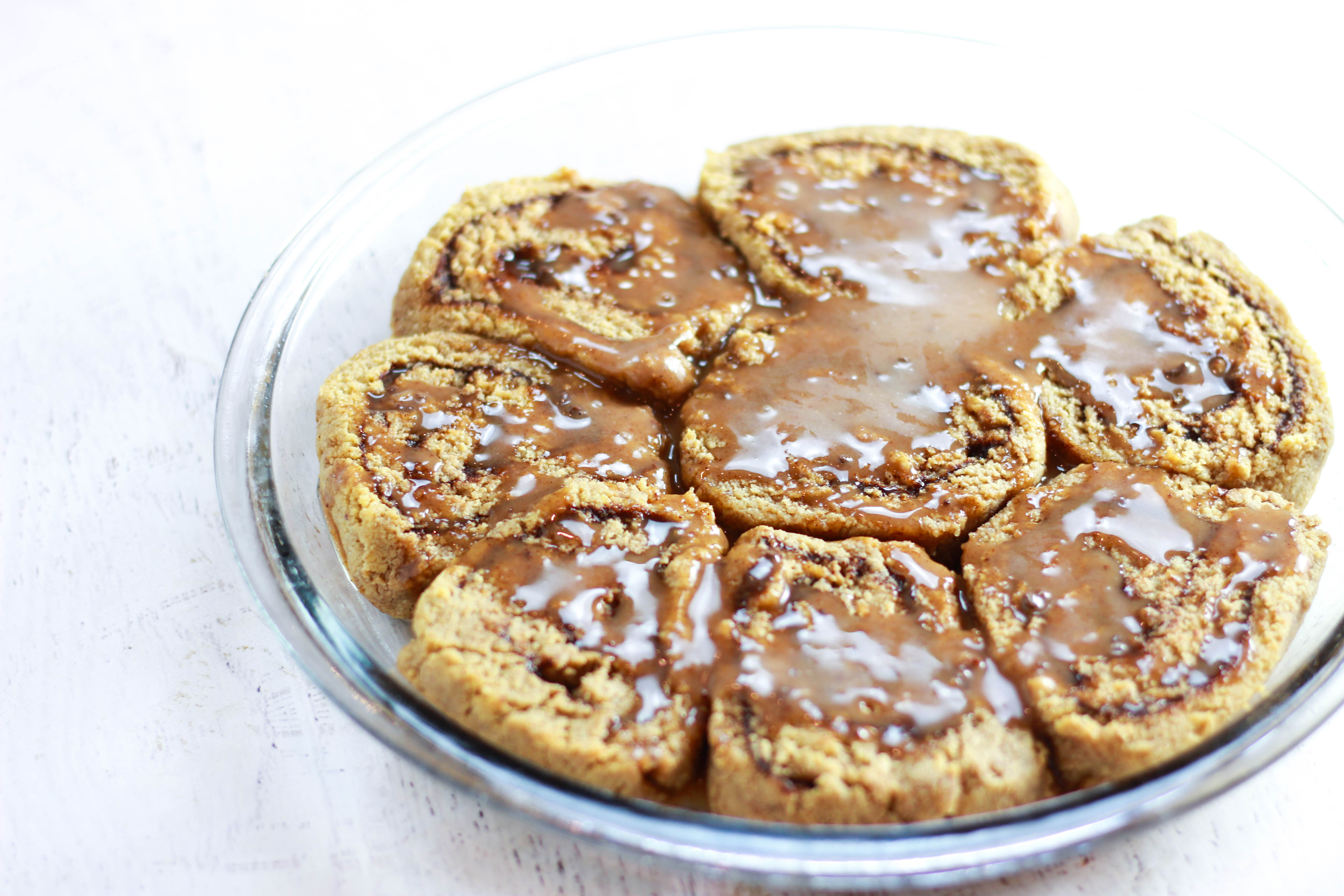 When those rolls were in the fridge, I knew a special occasion was coming up, because my mom always made Pillsbury cinnamon rolls on “special” mornings. It was either a holiday or a birthday.  Or I was at my grandma’s house – she spoiled us with cinnamon rolls. She would serve cinnamon rolls, grapefruit, and orange juice in wine glasses. Those were the days. 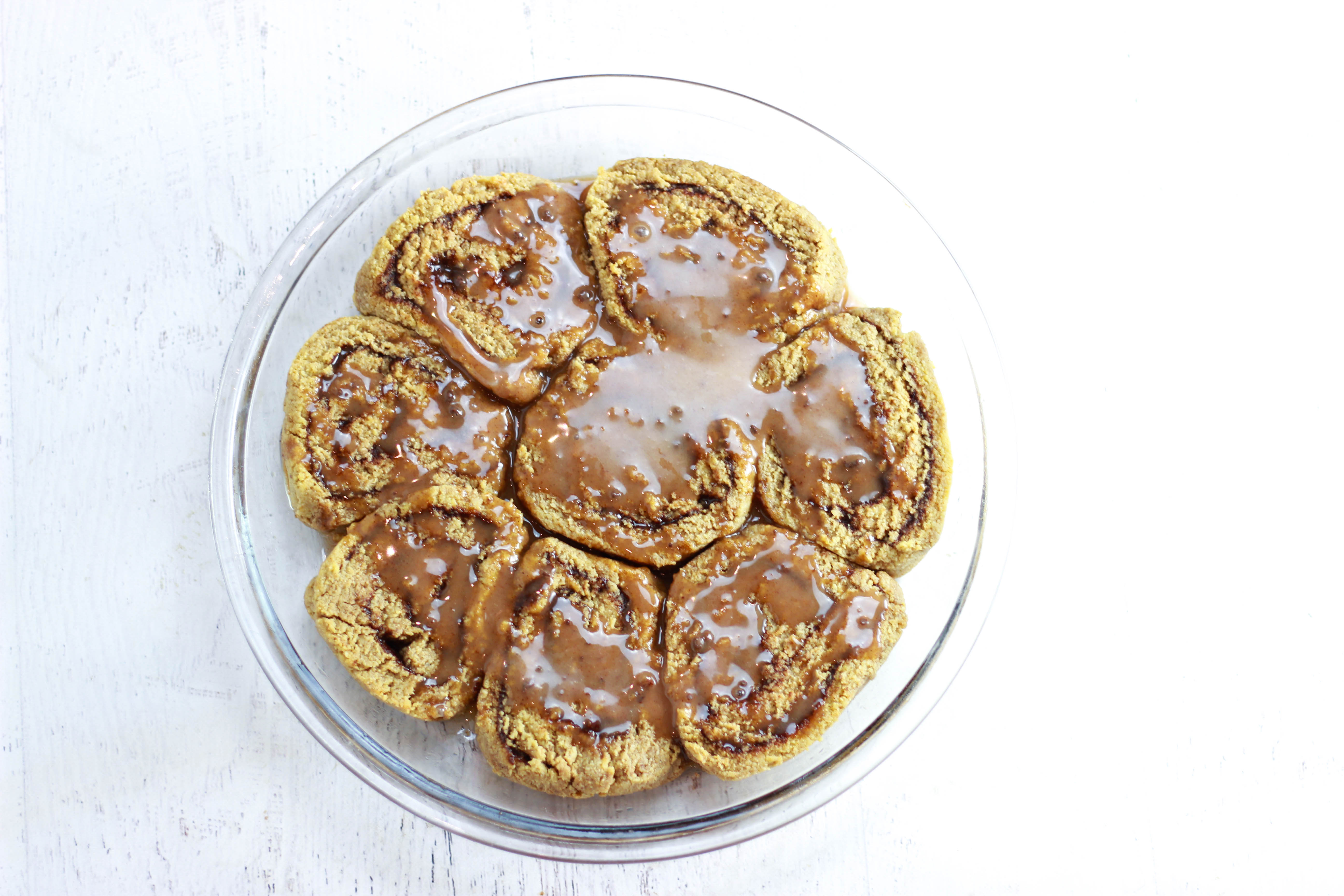 Anyways, Pillsbury cinnamon rolls were “homemade” pastries to me. Sometimes I’d get one from Cinnabon at the mall, but it just wasn’t the same as Pillsbury. I crack up now thinking about what I considered “homemade” back then – never even had to make my own dough or frosting. Now that I make almost everything from scratch, though, it gives me a new appreciation for the whole baking process. 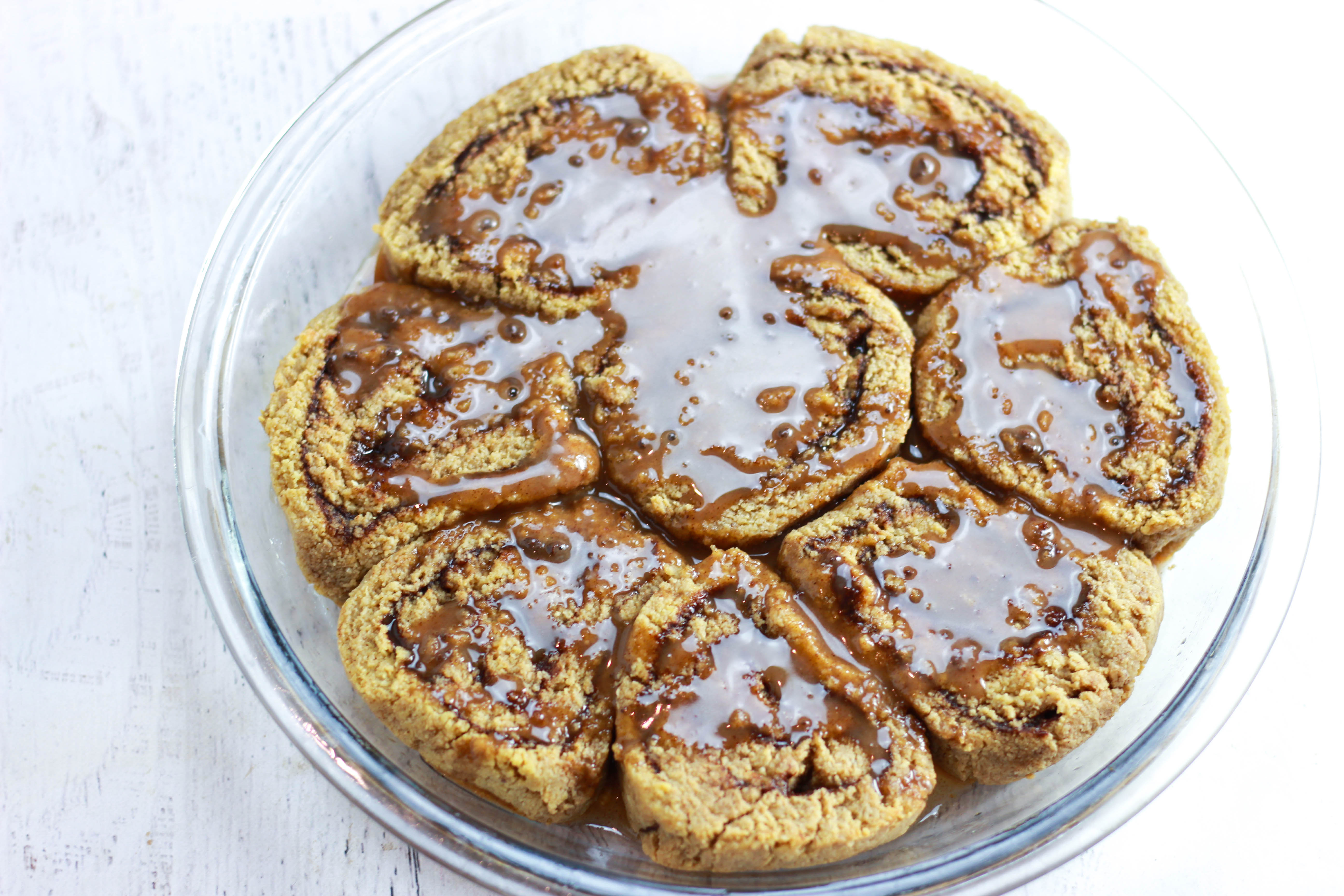 Anyways, I will always have a weakness for cinnamon rolls. Anytime I come across a gluten-free, dairy-free cinnamon roll, I feel compelled to buy it. They’re pretty hard to come by, so I never pass one up. 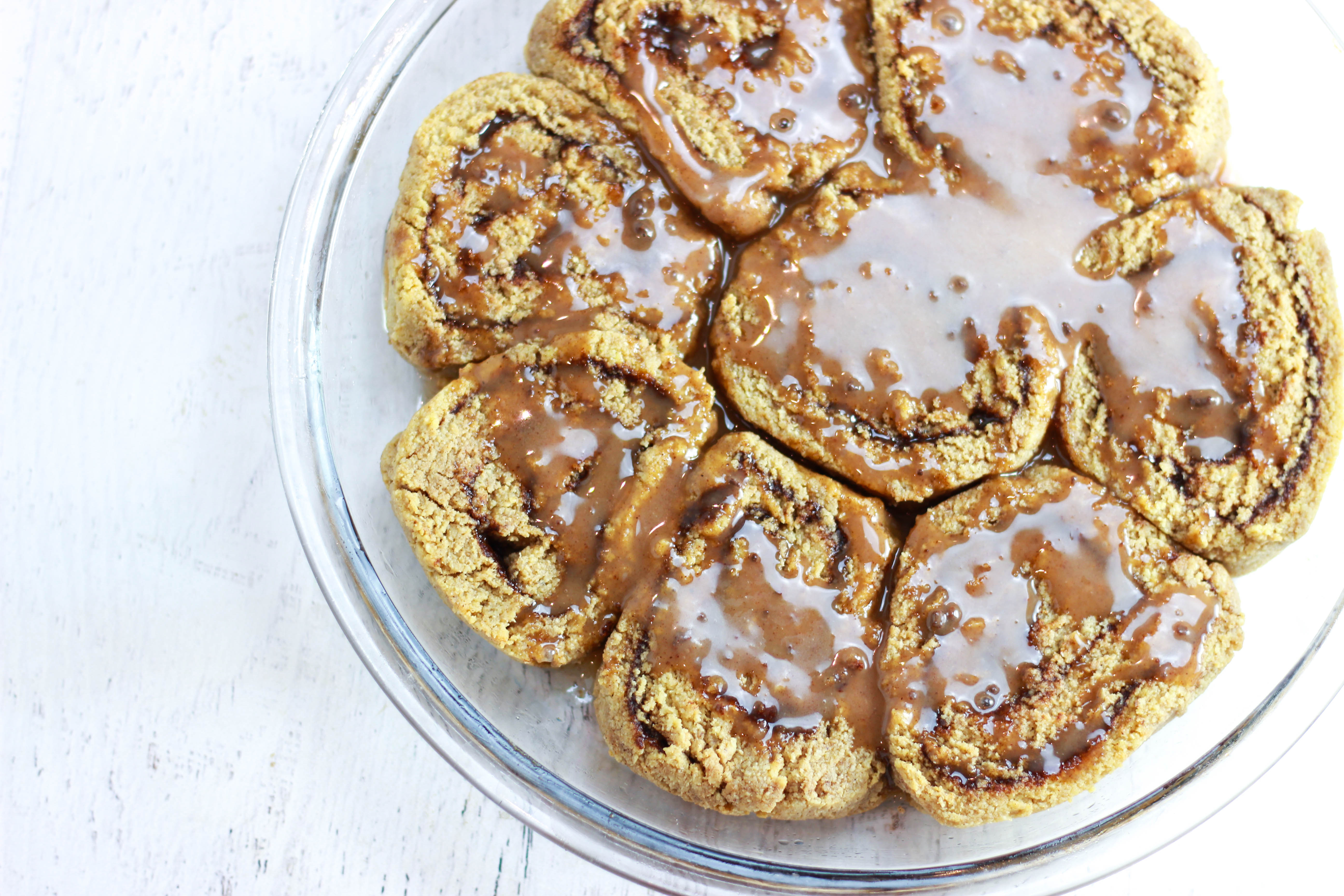 Usually, though, if I do come across a GF/DF cinnamon roll, it’s raw. All of my favorite raw vegan restaurants serve raw cinnamon rolls, which are delicious – don’t get me wrong – but they’re not the same as a true pastry. Over the holidays, I was craving a good ole’ warm cinnamon roll with frosting, and I couldn’t shake the craving. Most of the recipes I saw online felt like too much work, though, or I didn’t like the ingredients. 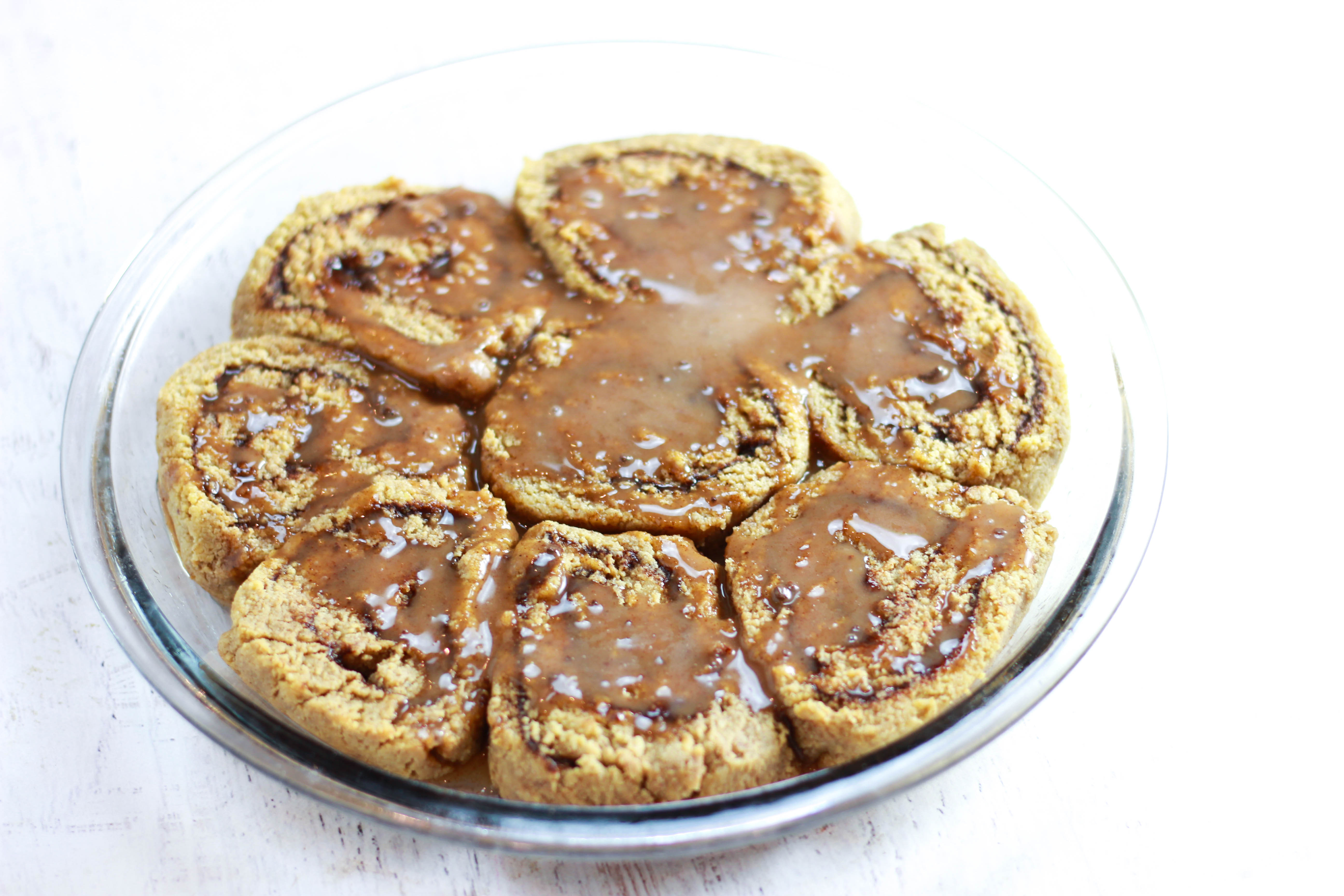 When my friend Addie visited me over Thanksgiving, we got some gluten-free cinnamon rolls from a local restaurant, which obviously led to a conversation about cinnamon rolls. If you’ve listened to any of my podcasts with Addie, I’m sure you know that 70% of our conversations revolve around food. I love it. I told her I was determined to make easy but delicious cinnamon rolls for my blog this year, and it finally happened. 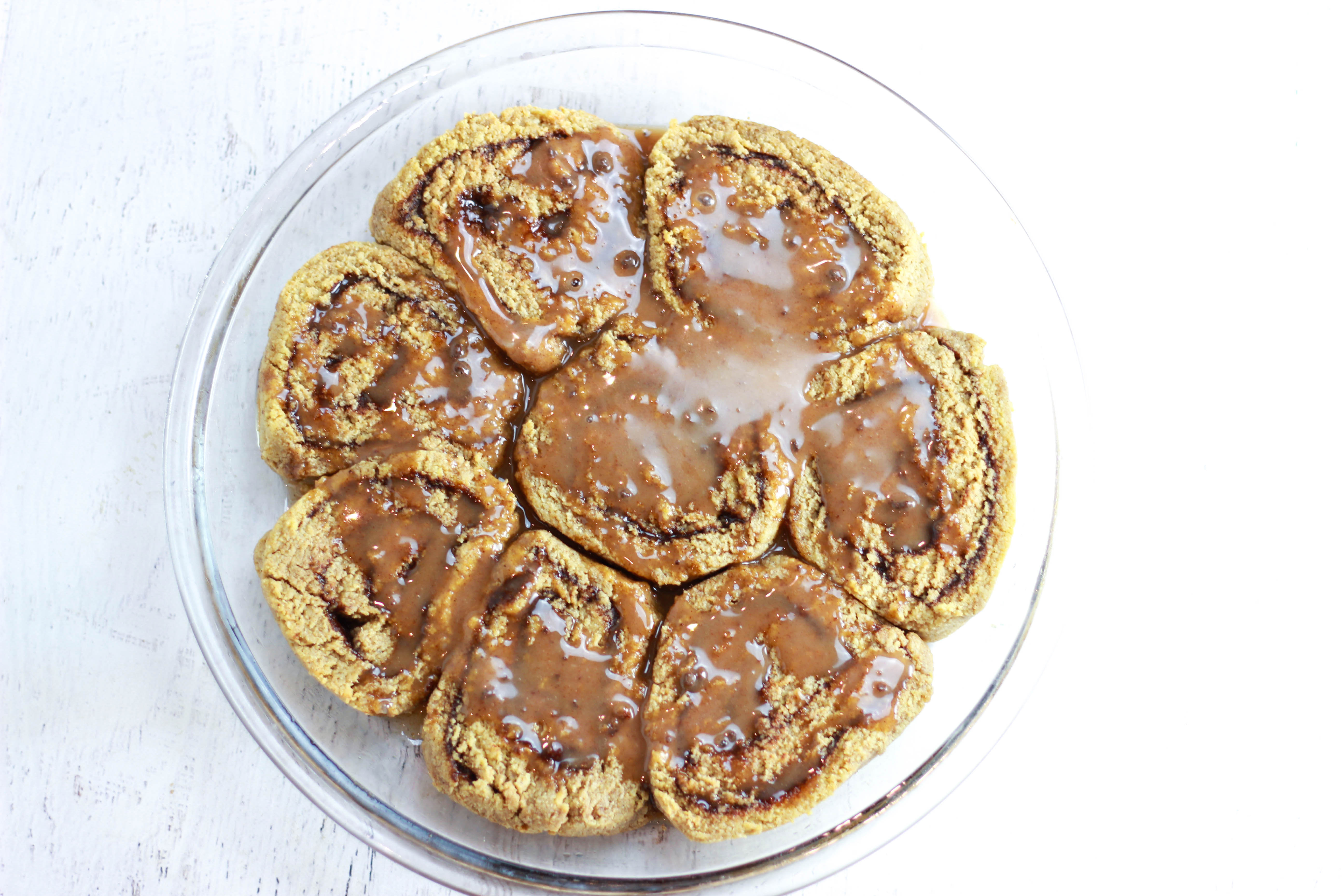 The problem I’ve always had with cinnamon rolls is that I always feel a little…sick after I eat them. They’re usually so heavy in sugar and fat that I feel bogged down and sometimes even nauseous afterwards, even though while I’m eating it I can’t notice. It always hits me afterwards. For these cinnamon rolls, I set out to make something that would still satisfy that craving without being overly sweet or heavy. Trust me, they’re plenty sweet, but they won’t leave you feeling ill like a lot of traditional cinnamon rolls do. 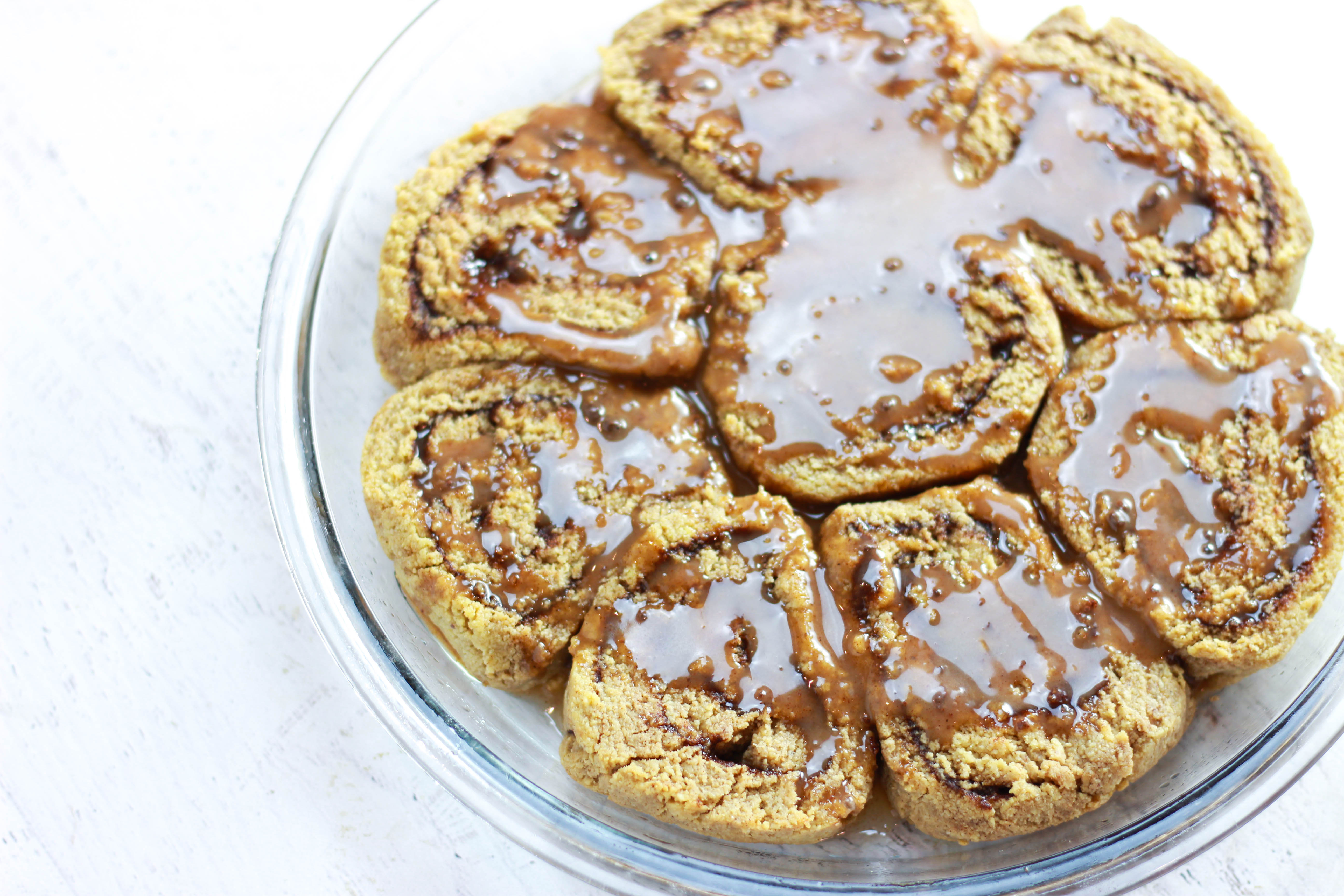 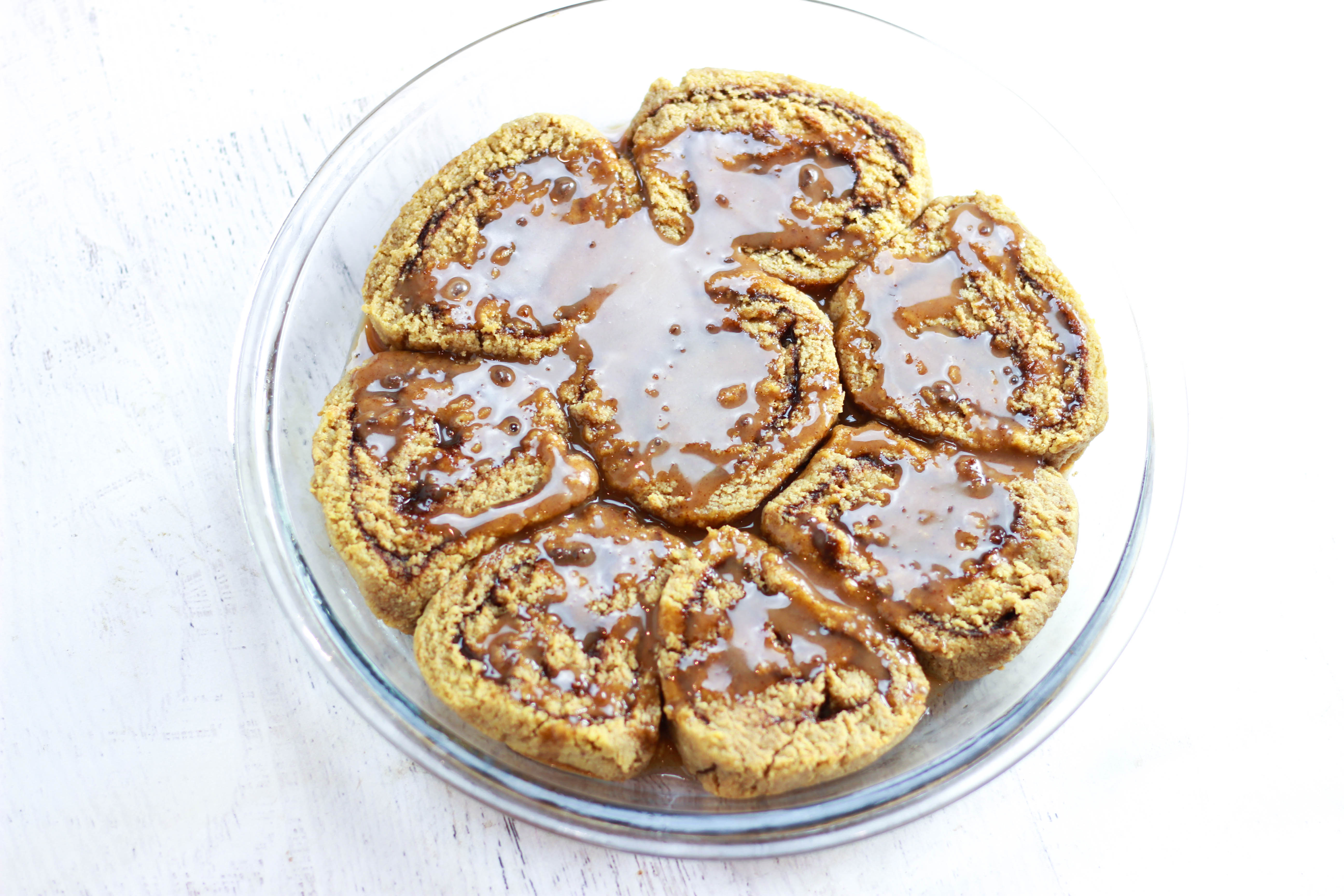 The last time I visited my hometown, I made these with my friend from high school who doesn’t usually eat paleo desserts, and I was very pleasantly surprised when he asked if he could bring the leftovers home with him! He usually takes a few of the treats I make, but never wants the whole batch. Not only did he love these, though, but his family did too! His mom texted me the next day saying how delicious they were, so I knew they were a winner. 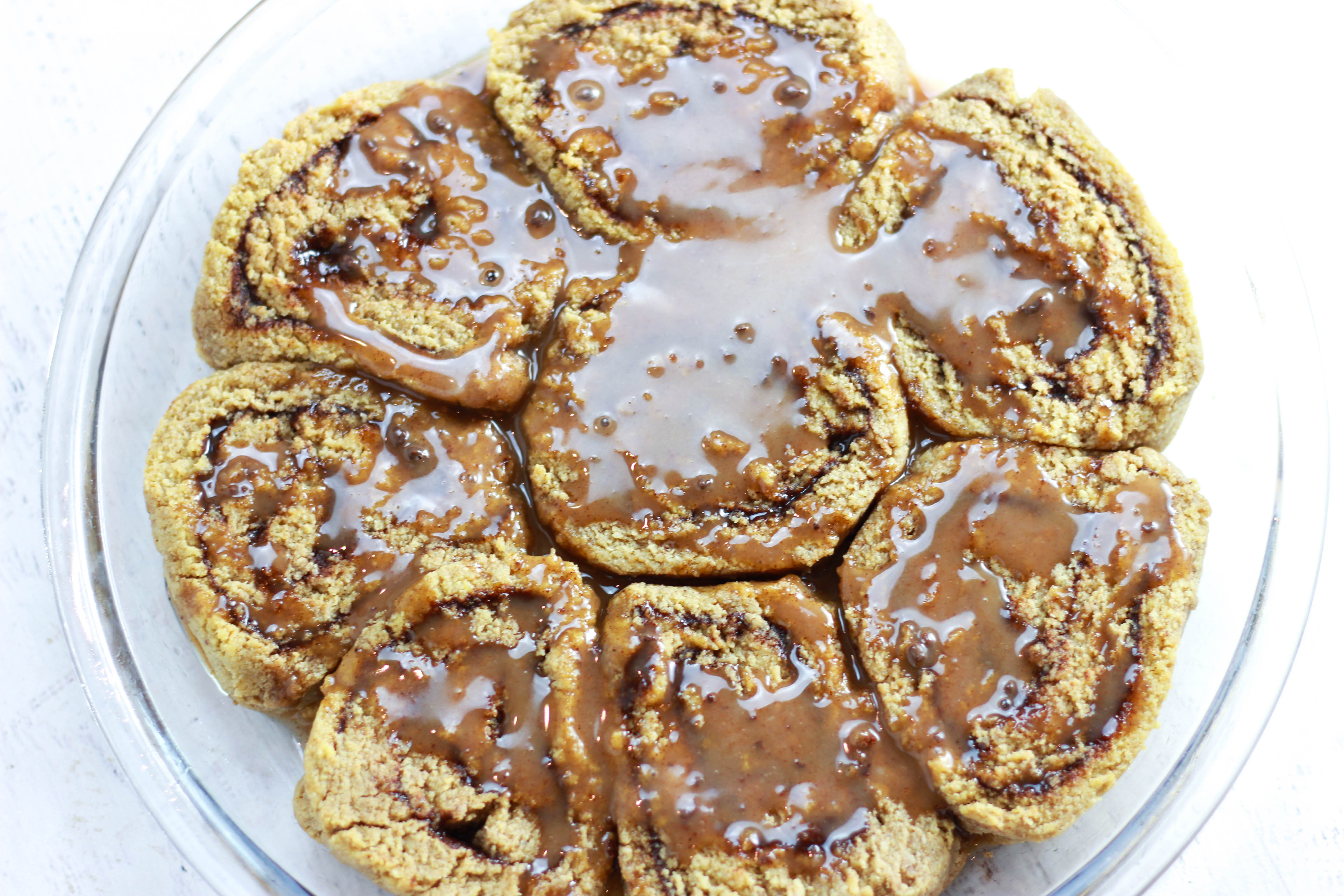 I had saved a few for both of my parents, but the next morning when I woke up, all of the rolls I had saved were gone. Well, not all of them. There was one bite-sized piece left. I discovered that my dad had gotten into the batch, and he so graciously left that bite-sized piece for my mom. Safe to say she was pretty irked, but at least I knew that these were indisputably delicious! 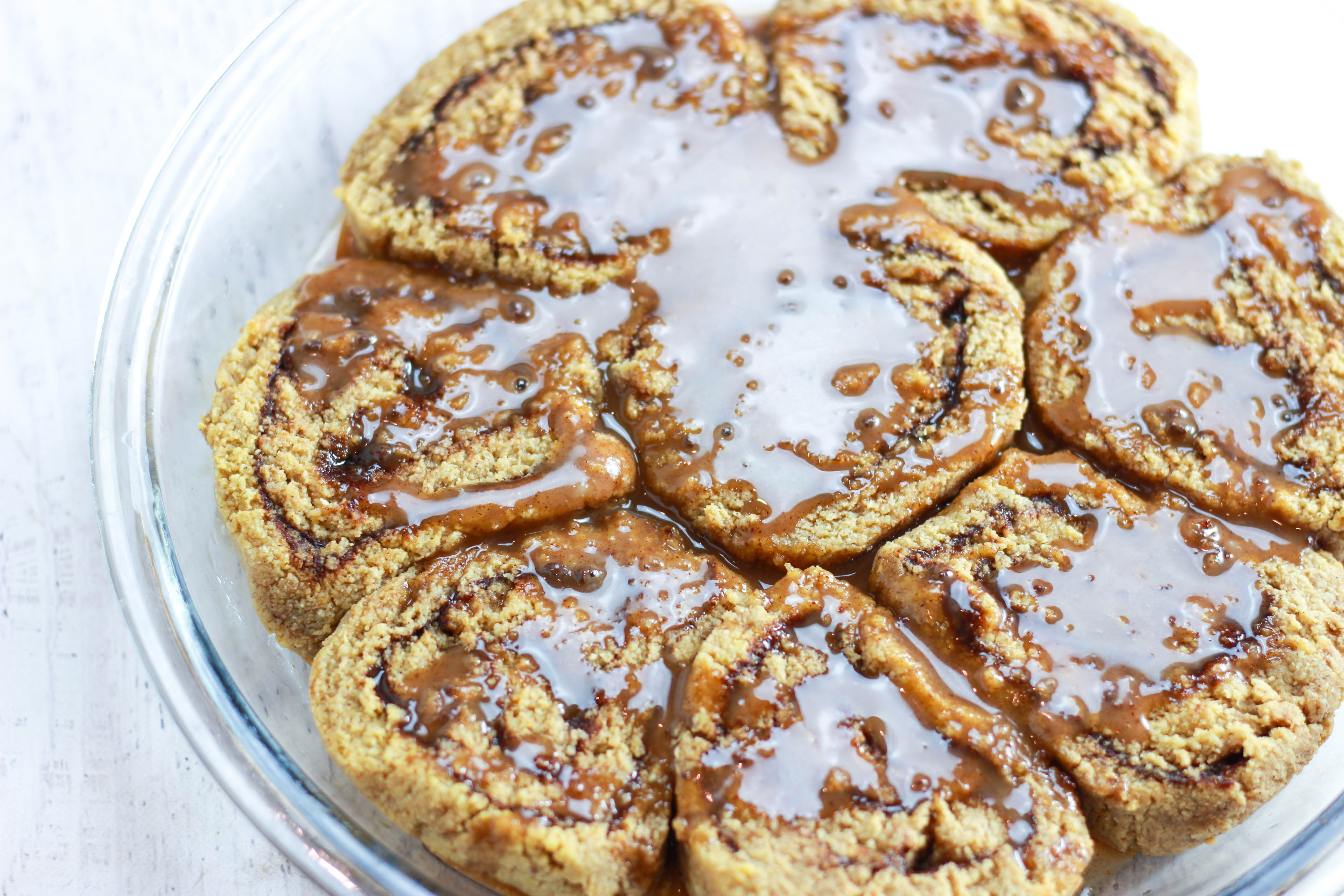 These cinnamon rolls don’t fluff up like typical cinnamon rolls, but they taste just as amazing. There are three parts – the dough, the filling, and the glaze – that all work together to make magic happen. 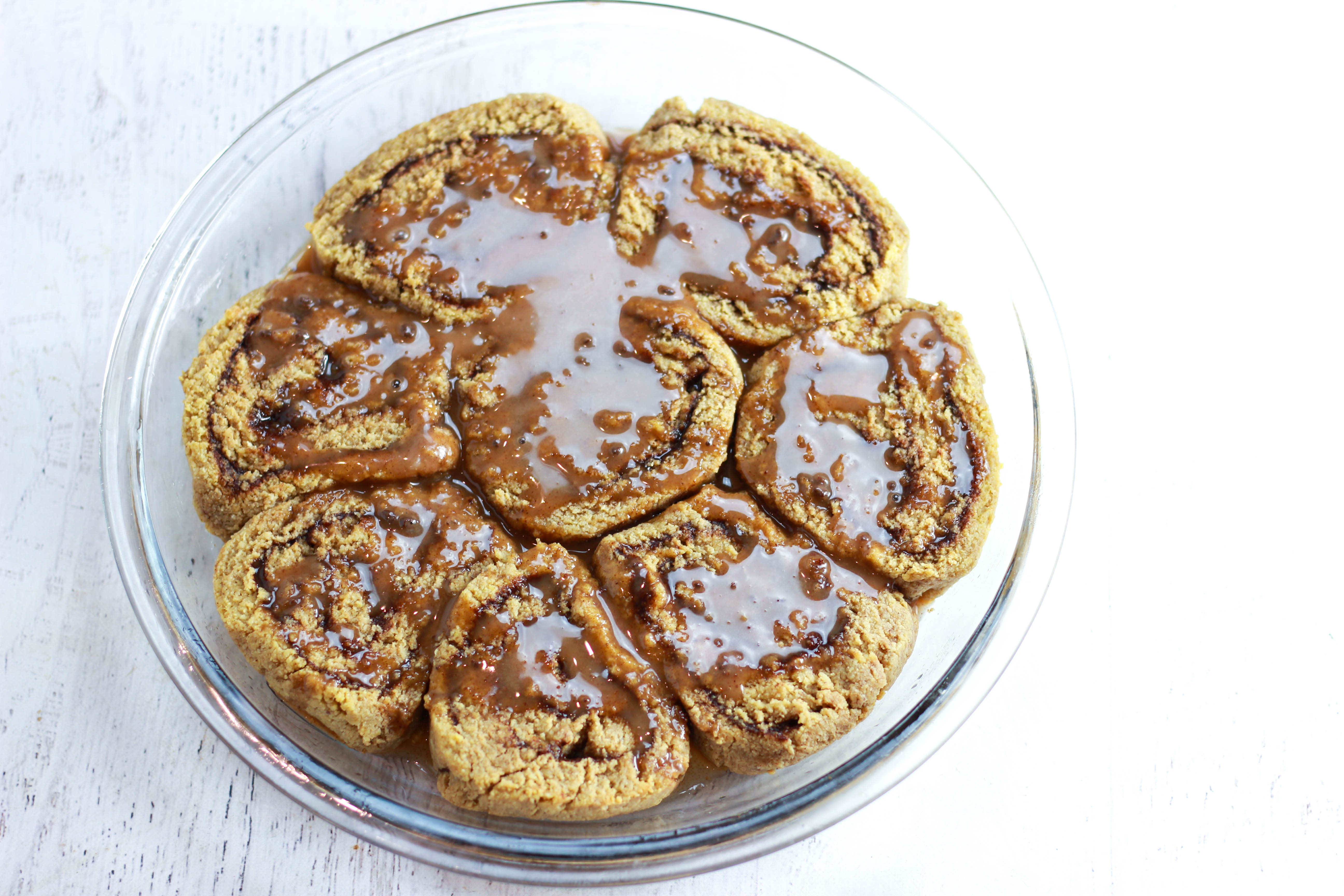 I used natural sugars in this recipe – maple syrup and coconut sugar – instead of the highly refined sugar you’ll find in conventional cinnamon rolls. I also used ghee as my cooking fat in this recipe to give a rich, buttery flavor. I really think the ghee plays an important part in making these taste like traditional cinnamon rolls, but you can also substitute coconut oil if you can’t do ghee. They’ll still taste delicious, they just won’t have that traditional “buttery” undertone, unless you use the butter flavor coconut oil. 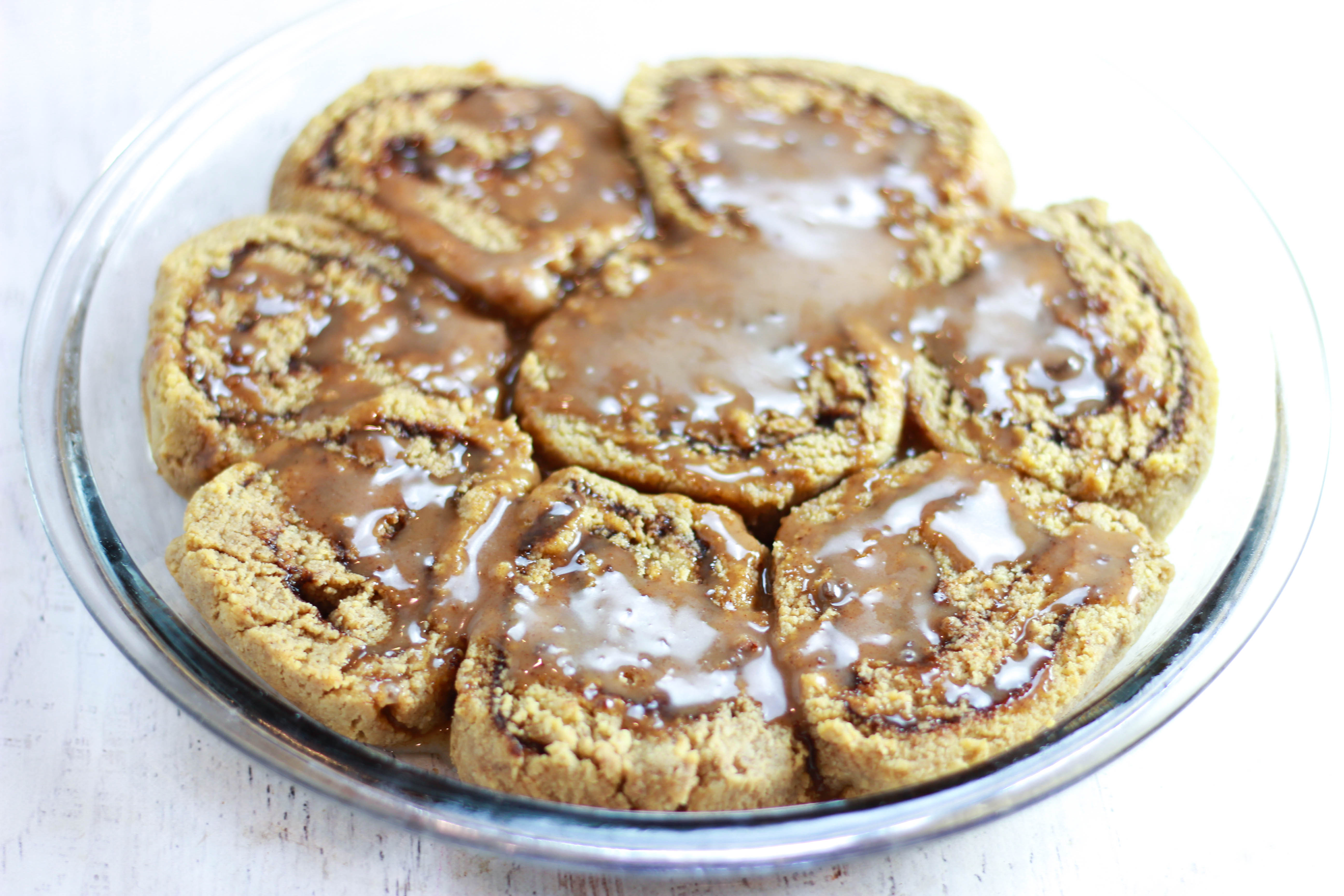 There’s NOTHING like a warm cinnamon roll straight outta the oven, right?! If you haven’t had a cinnamon roll in who-knows-how-many years, then it’s been too long! I know many of you follow paleo-based diets like me, so you might be in that camp. Here’s your chance to make PALEO, gluten-free, grain-free cinnamon rolls with an indulgent cinnamon glaze. Healthy cinnamon rolls?! Sign me UP! 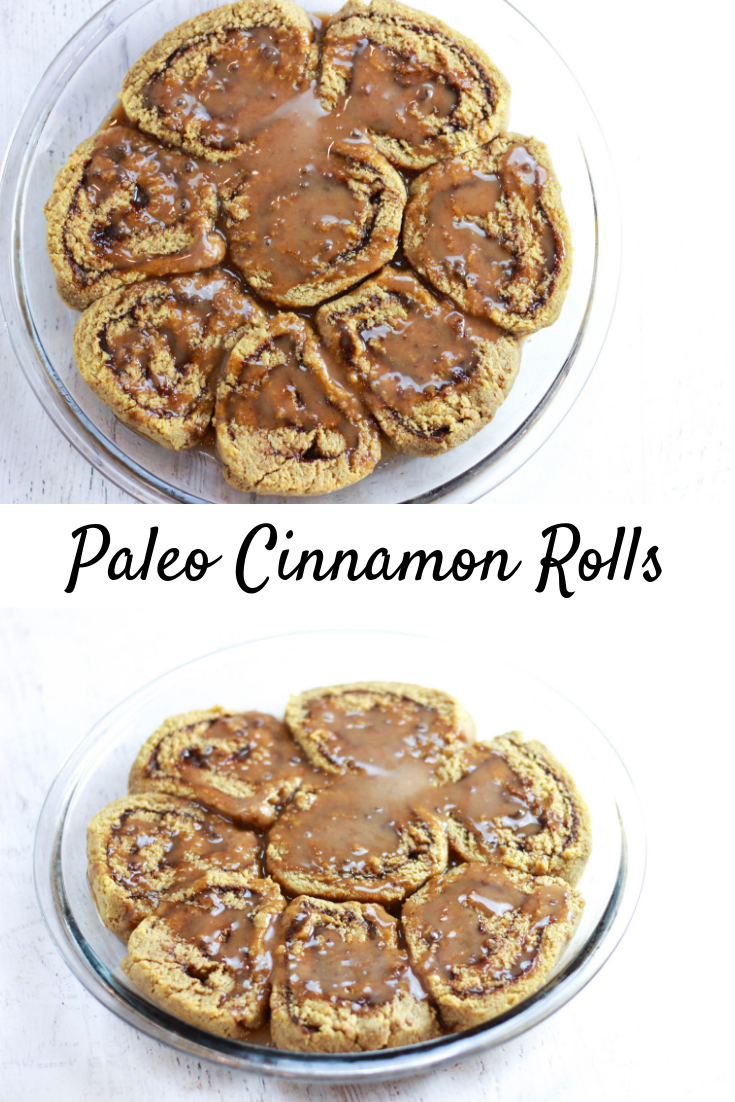 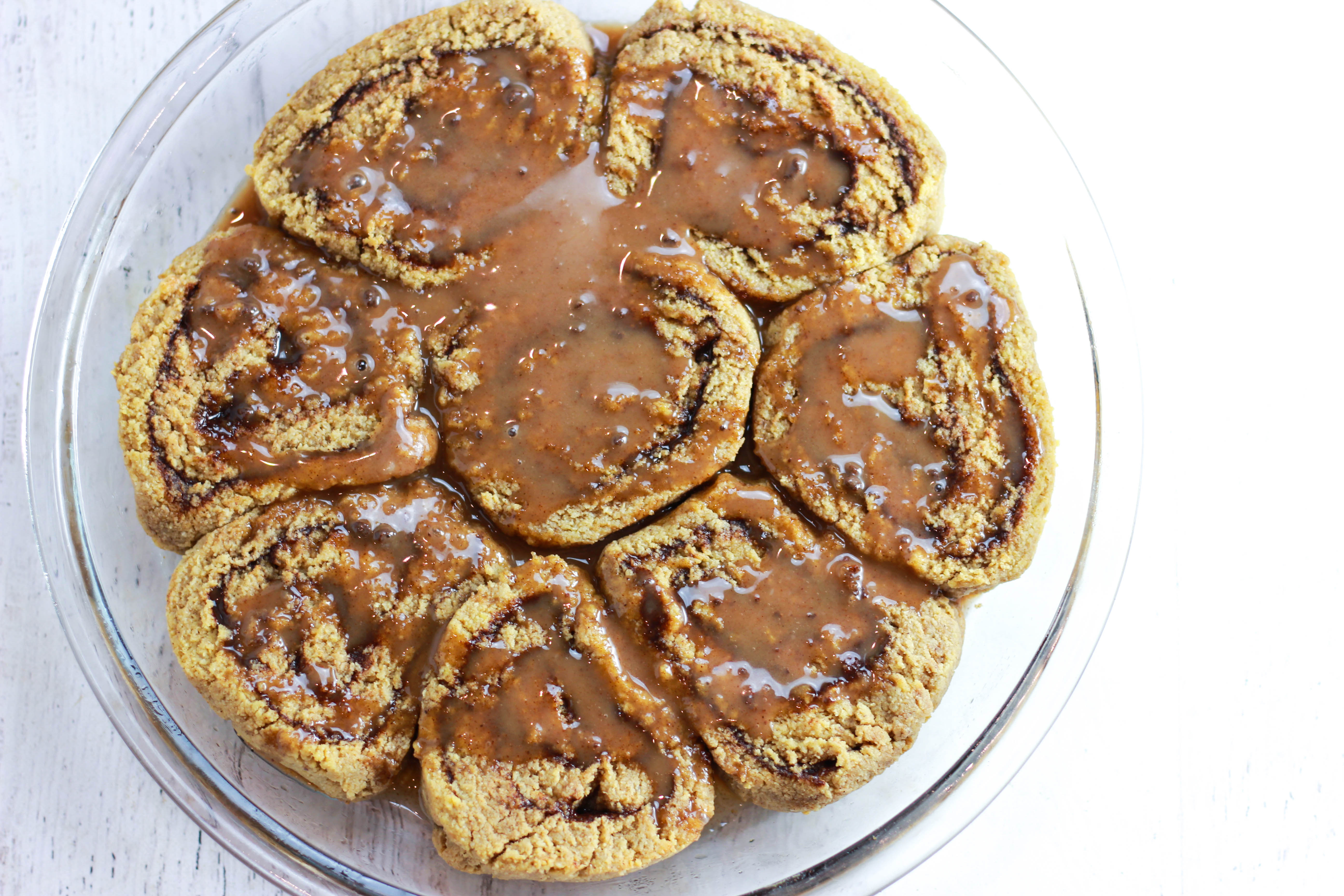