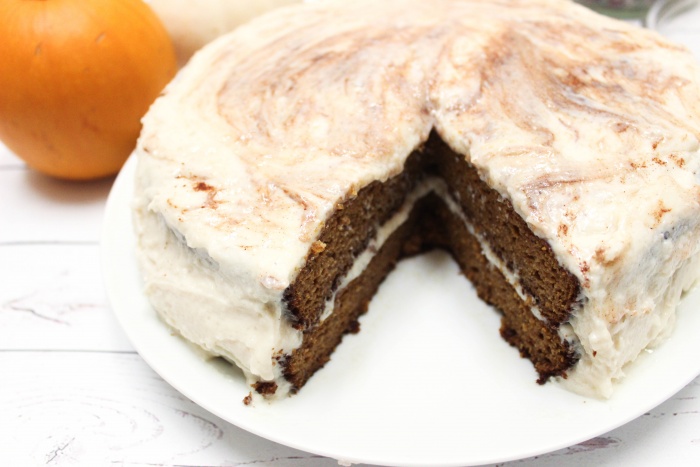 Okay, I PROMISE I’ll let up on the pumpkin after this one. But I had to post this. Depriving you of this insanely delicious cake would be a serious crime, and I wouldn’t be able to live with myself. 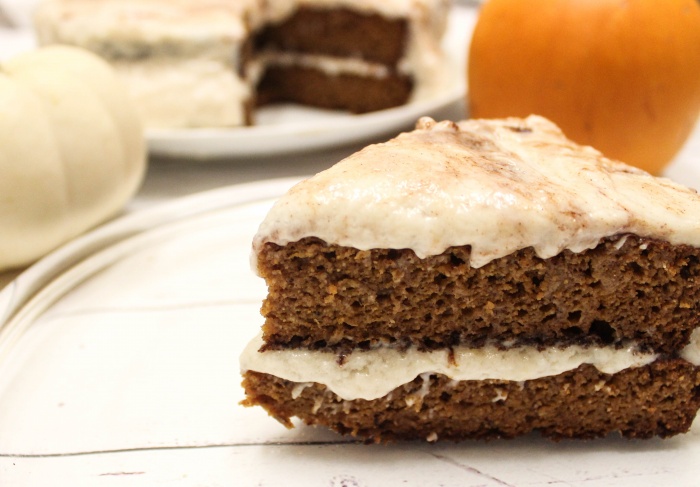 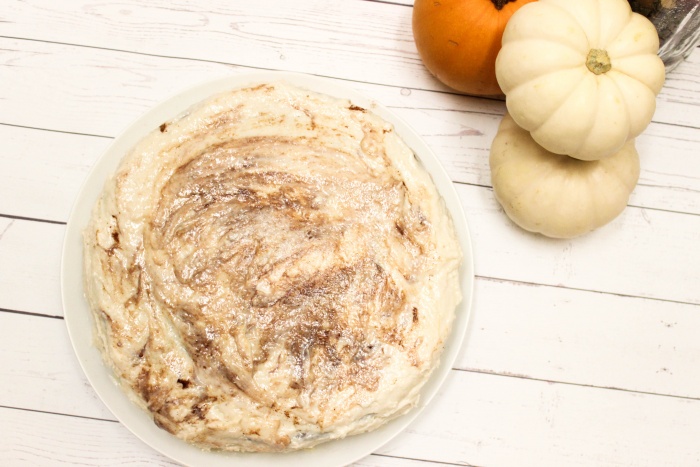 A year ago at this time, I wasn’t in school, so I spent most of my free time baking. I made so many recipes I thought my head was going to explode. And my roommates wanted to kill me because there was so much food in the apartment. 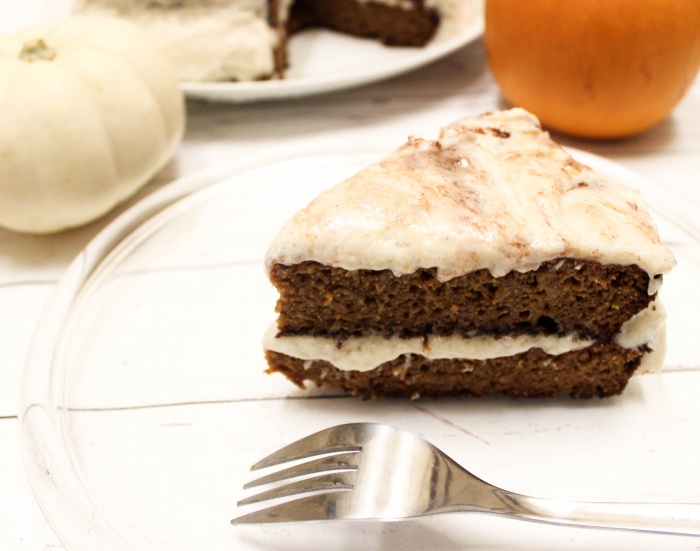 I was determined to make the absolute best Thanksgiving dessert in the history of desserts. I won’t lie, I really wanted to impress my family. They always give me shit for being such a health nut, and I was desperate to prove that healthy food tastes way better than unhealthy food. 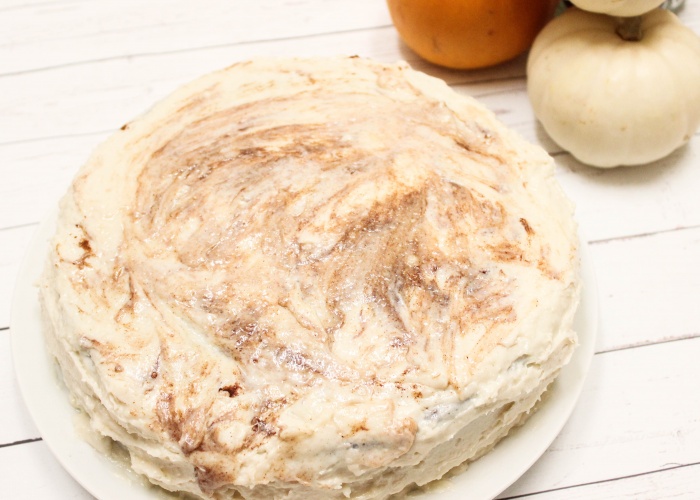 I stumbled across a recipe for a pumpkin spice cake with cream cheese frosting, and I was sold. I baked the cake, and…Oh. My. Gosh. Socks were knocked off. The cake was gone in a night. Mission accomplished. If my dad’s obsessed with it, you know it’s the real deal. He is the king of junk food, and he even asked me to make it again. 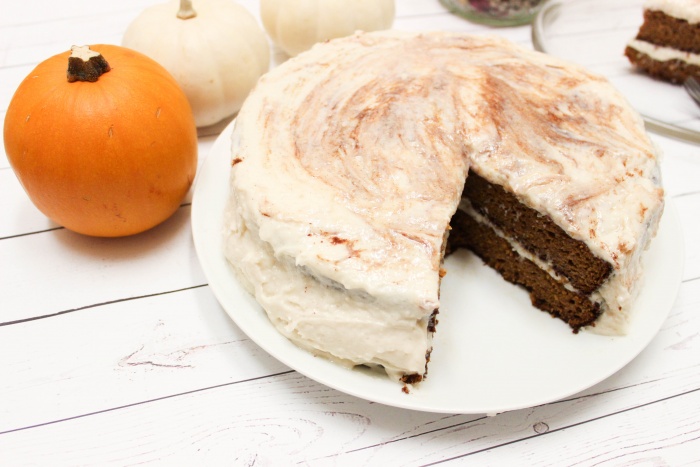 I’ve honestly been dreaming about that cake ever since. Cakes seem very grand though, so I always feel like I need an “occasion” to bake one. I’ve been waiting for the holiday season to roll around again so I would have an excuse, and Halloween was the perfect opportunity to recreate that oh-so-glorious pumpkin spice cake! 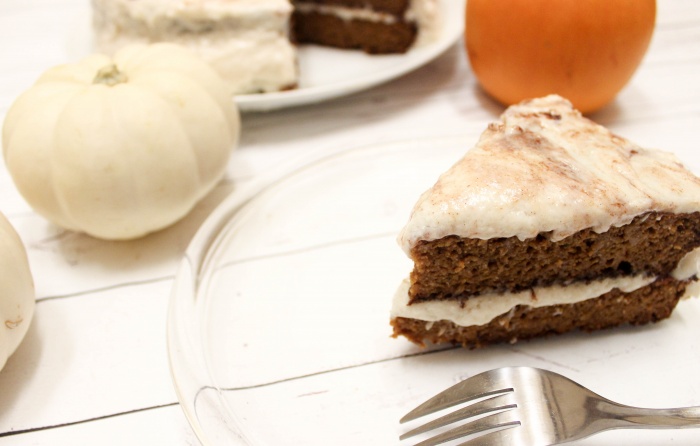 After a few tries, I got it. NAILED IT. Everyone was fighting over this cake, and my friends were texting me begging for slices. Everyone was welcome, of course! When people are that desperate for more cake, you know it has to be good. 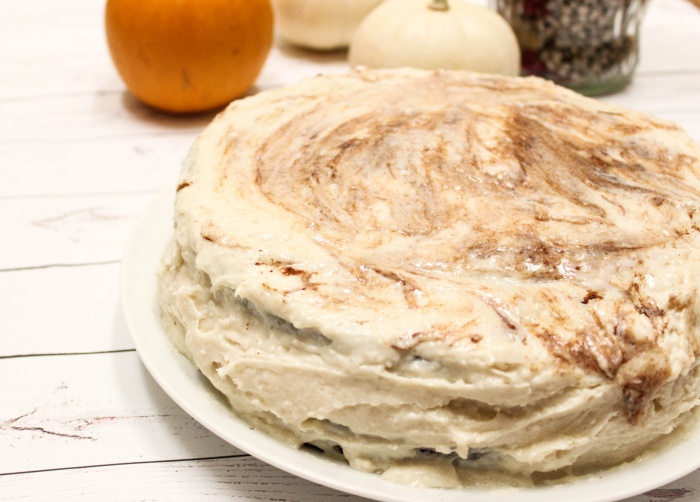 I also feel like it’s very visually appealing. Like, messy-pretty. The cream cheese frosting looks like cinnamon marble, and the layers give it that extra oomph. So if you wanna impress your boyfriend…you know what to make. 😉 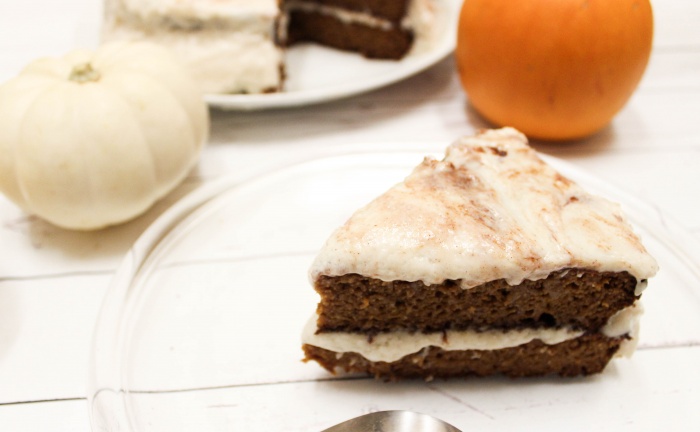 While recipe testing, I actually came up with two different recipes that were both amazing. It took my roommates and me all week to finally decide which of the two cakes I should post. One was more pumpkin-y, richer, and denser, and the other was a little less pumpkin-y, lighter, and fluffier. We ended up deciding on the latter because it tastes more like a “normal person cake,” if you know what I mean. 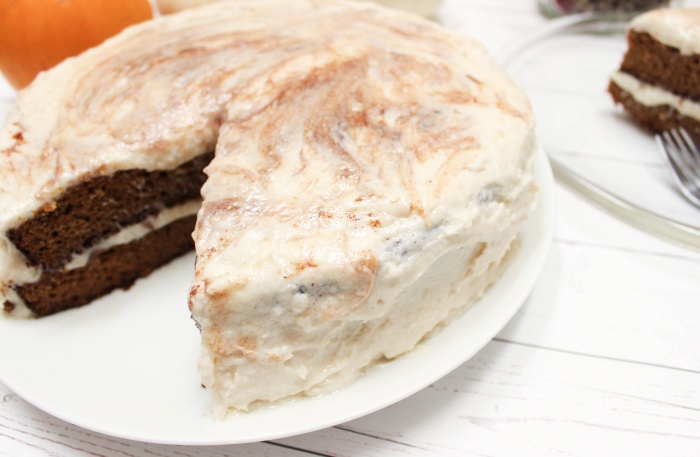 Anyways, I’m extremely proud of this. So many of you were begging for the recipe, SO HERE IT IS. The cake is pumpkin-heaven. It’s moist, fluffy, not too sweet, not too bland. The sweetener in this cake is xylitol, which isn’t the best, but it’s also what allows this cake to taste exactly like a regular old junk food cake without being a toxic mess. Xylitol is low on the glycemic index and doesn’t spike blood sugar levels, so it is much better than traditional cane sugar. So hey, it’s not perfect, but it’s still pretty healthy as far as cakes go. If you’re celebrating with a cake, I doubt you’re trying to eat a 100% perfectly healthy meal, anyways. Life is about balance and enjoyment, right? 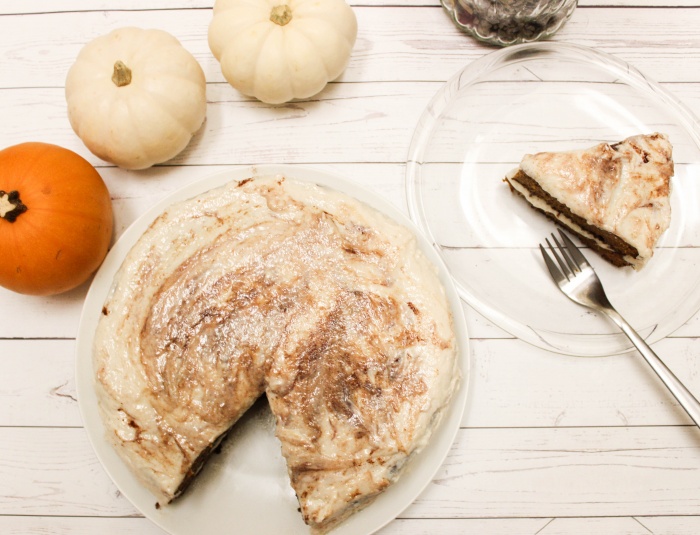 Let’s focus on why this is Addicted to Lovely approved. Obviously, it’s gluten-free. It’s also dairy-free, soy-free, grain-free, and technically “sugar-free” because xylitol is a sugar replacement. There’s really nothing offensive in this, per usual. And of course, it’s so delicious that I’m literally drooling just thinking about it. 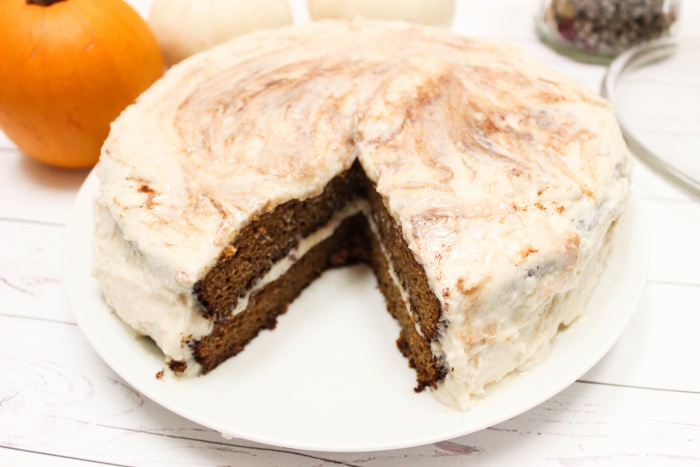 The cake is not vegan because there are quite a few eggs in there. If you’re vegan and want to experiment, I’d recommend upping the pumpkin and replacing some of the eggs with flax eggs! I haven’t tried it myself, but I think it could probably work. 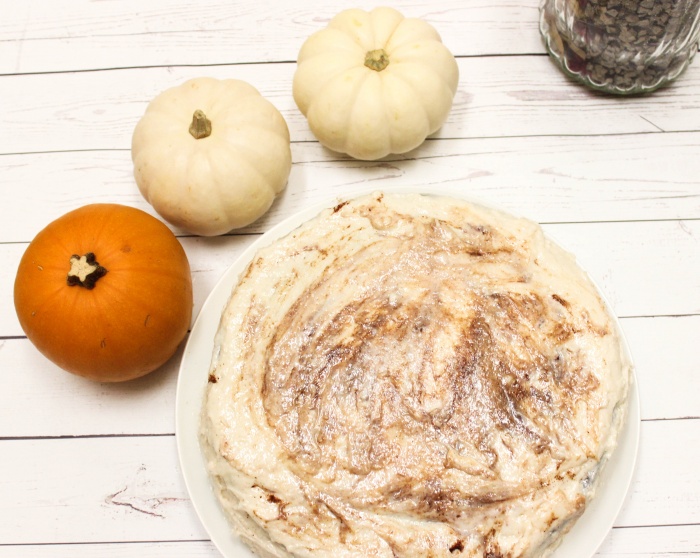 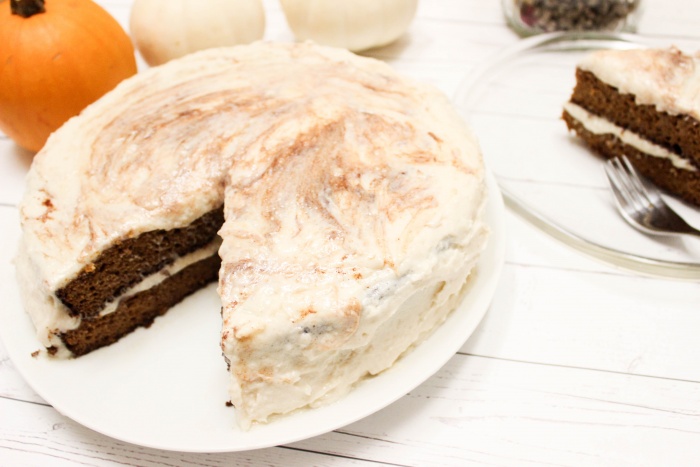 Go to the vegan cheese section in your grocery store and see what’s available. If they have Daiya plain cream cheese, use that. But if they have Kite Hill, that’s the real winner. I’m obsessed with Kite Hill because they have the cleanest fake cheese on the market. It’s all about ingredients! 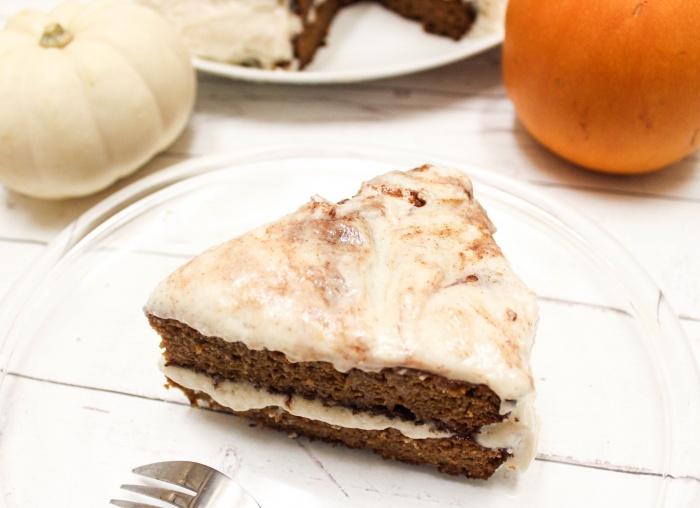 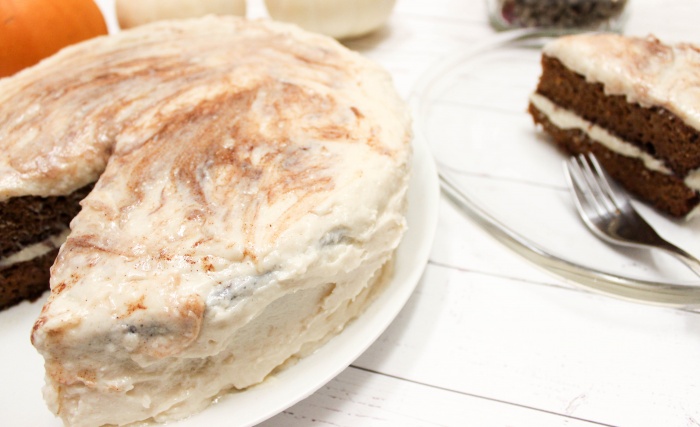 I’m really really really into this recipe. It is so heavenly, and every person who has tried it loves it. If you’re looking for the perfect Thanksgiving dessert recipe, I would HIGHLY recommend this. Not like I’m biased or anything. So. Let’s bake! 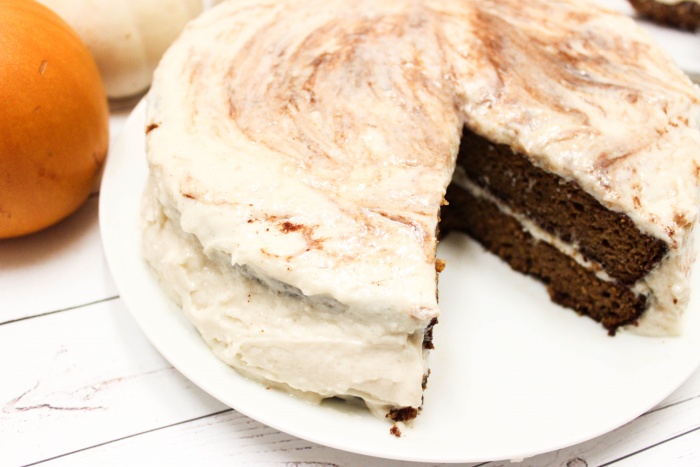 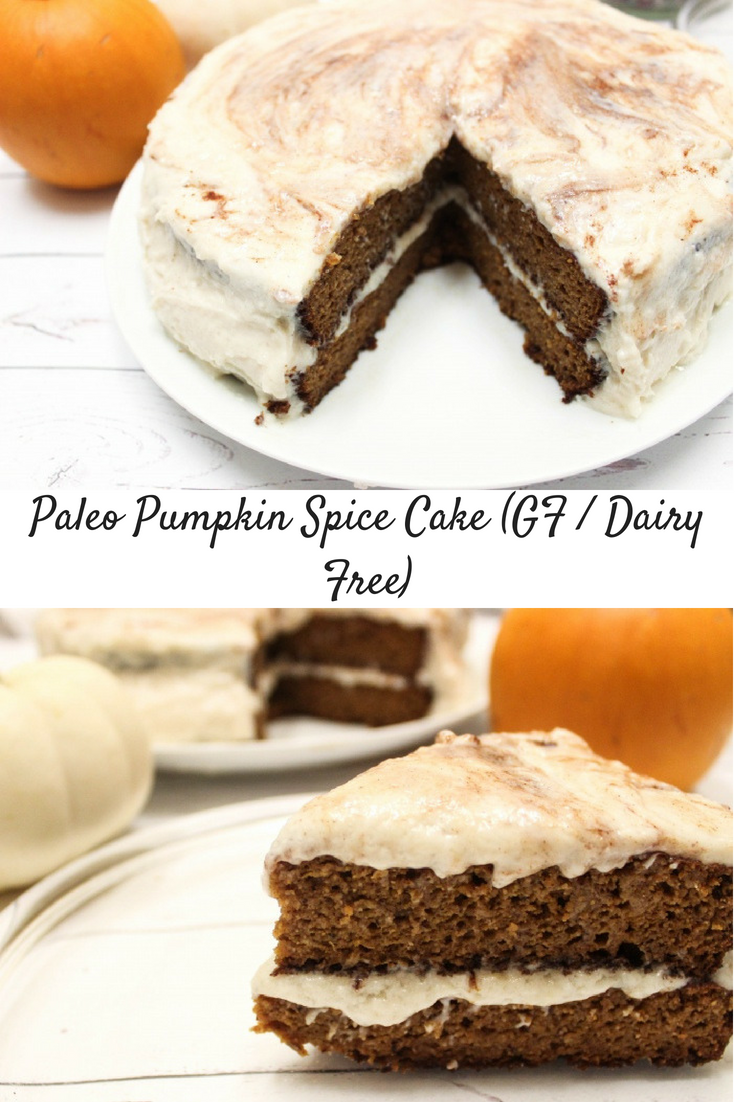 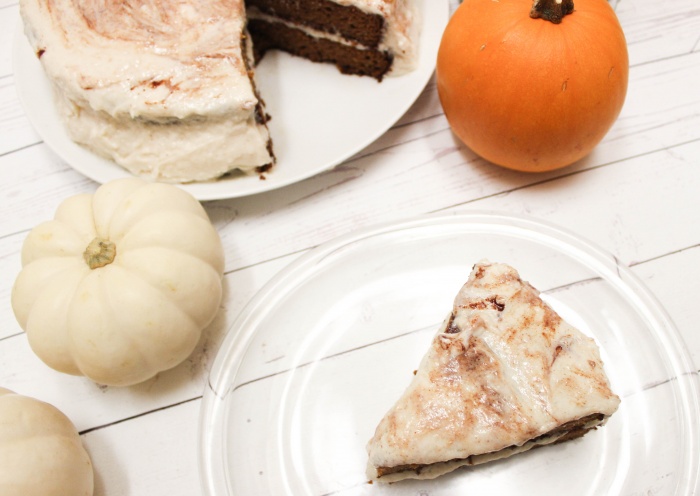 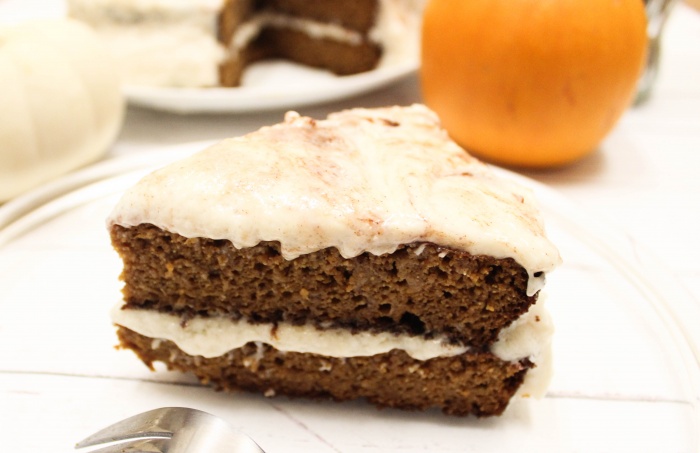 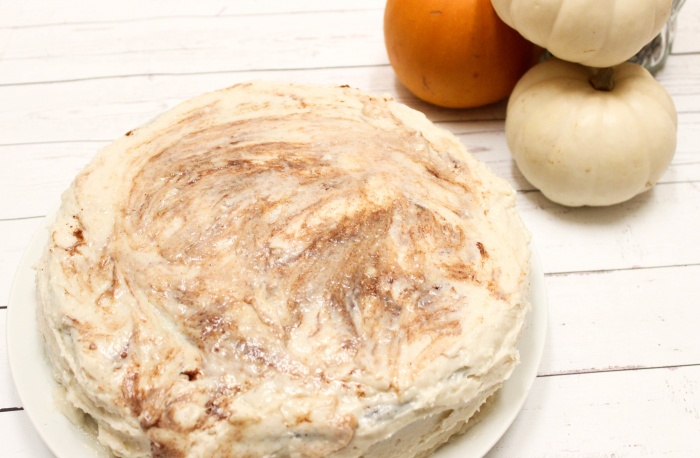 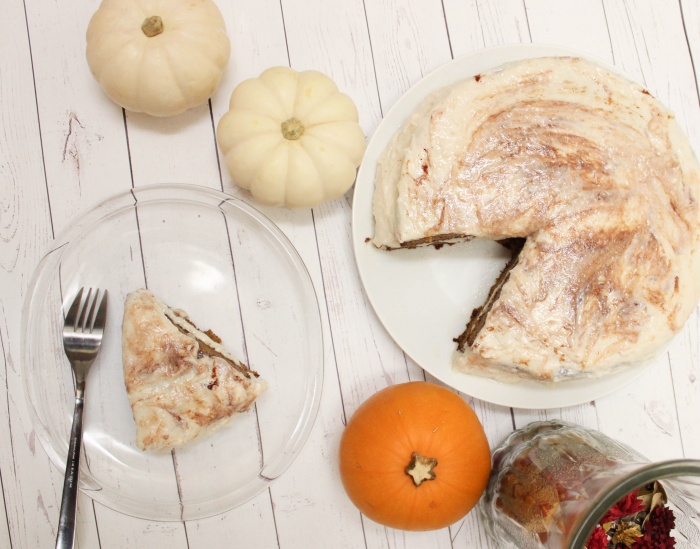 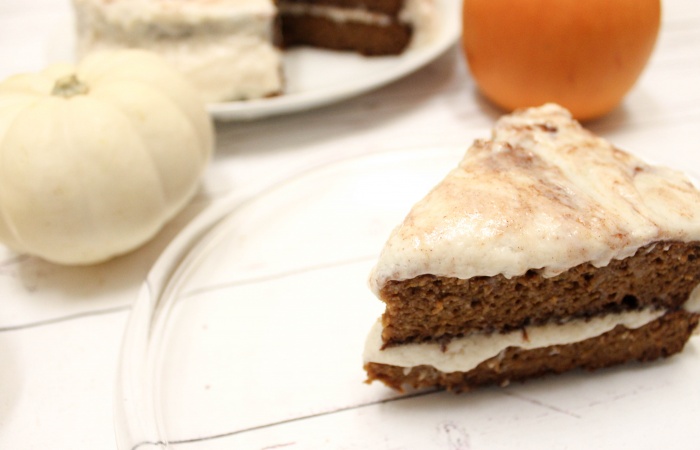 Easy enough, right? If you make this, PLEASE take a picture and tag me! And tell me what you think! This also pairs quite nicely with vanilla ice cream….just sayin’.  XO 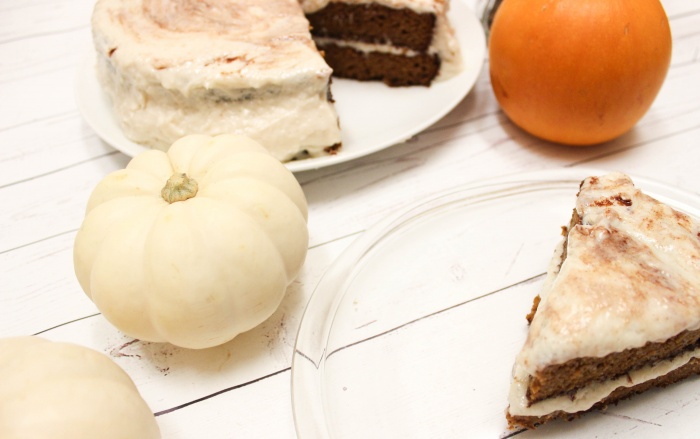