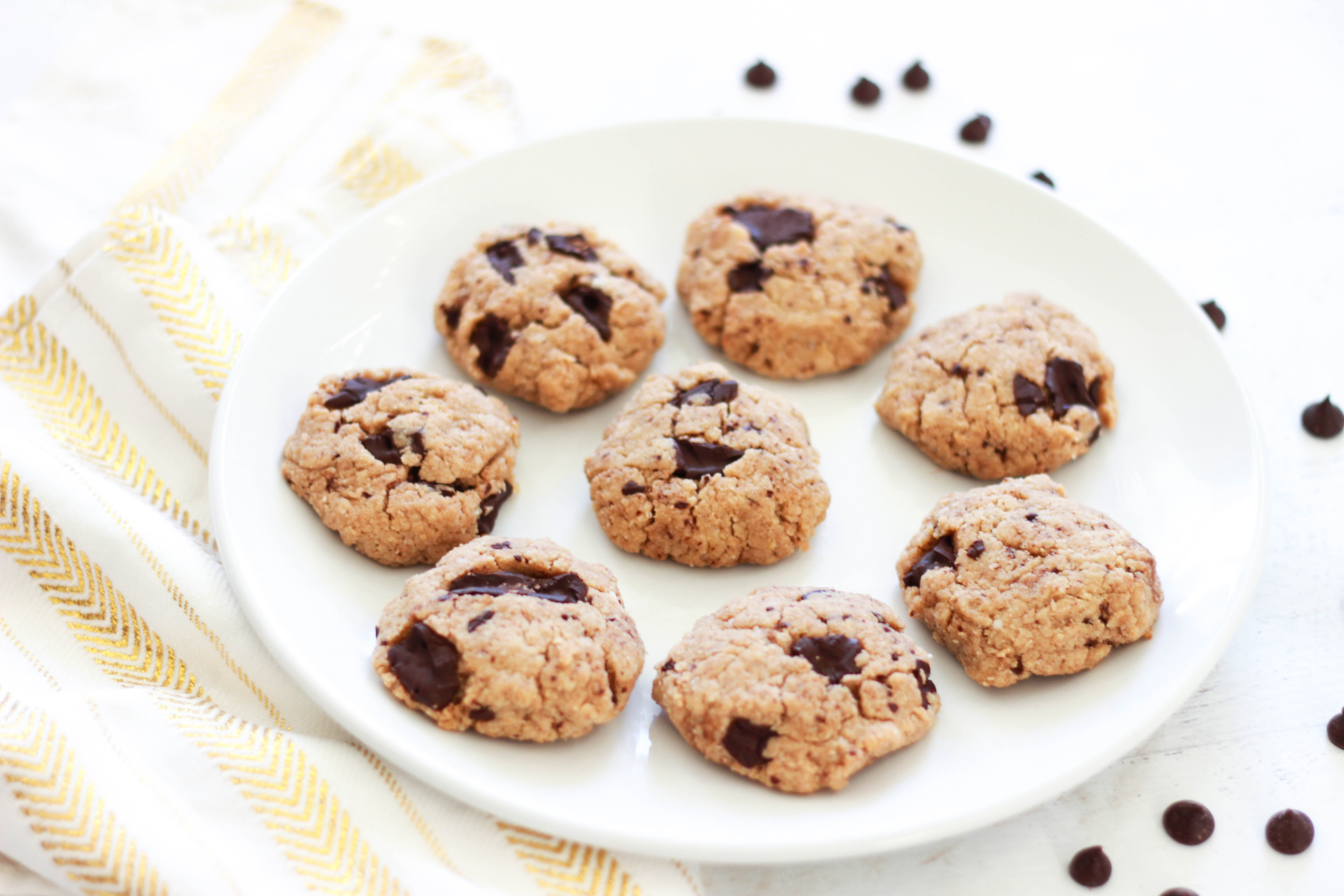 I’ve wanted to create a sugar-free paleo chocolate chip cookie recipe for a long, long time. And trust me – I have tried many times. My first attempts were while recipe testing for my #NoSugarNoProblems Part 1 ebook, but I could not get them right. I grew frustrated with all of the failures, so I decided to leave it for another time. 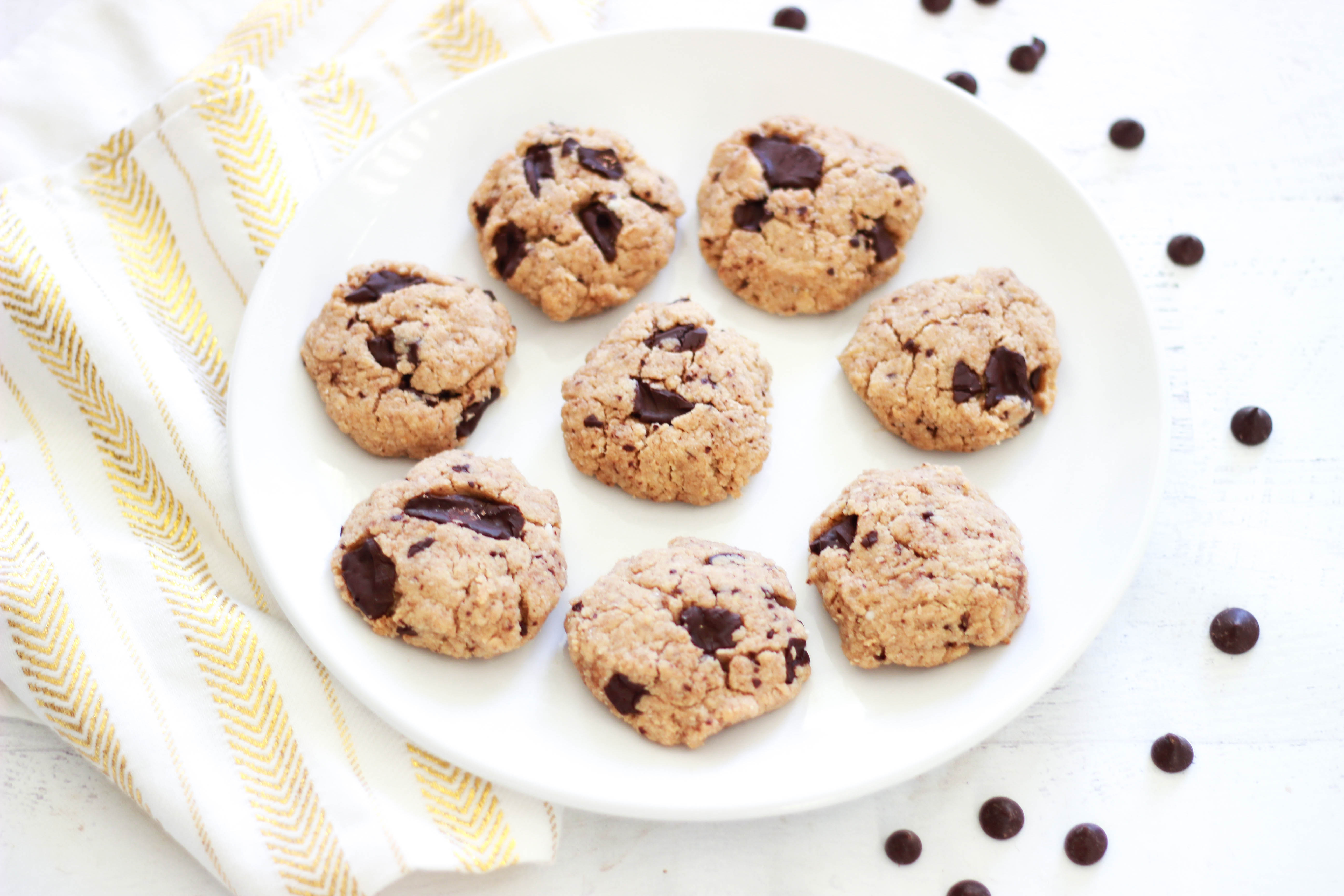 I tried once again a few months later, but still couldn’t get it right. Then I made #NoSugarNoProblems Part 2, and after that sugar-free accomplishment I felt like I was finally ready to nail down a really good, sugar-free chocolate chip cookie recipe. This time, I was DETERMINED to actually do it. 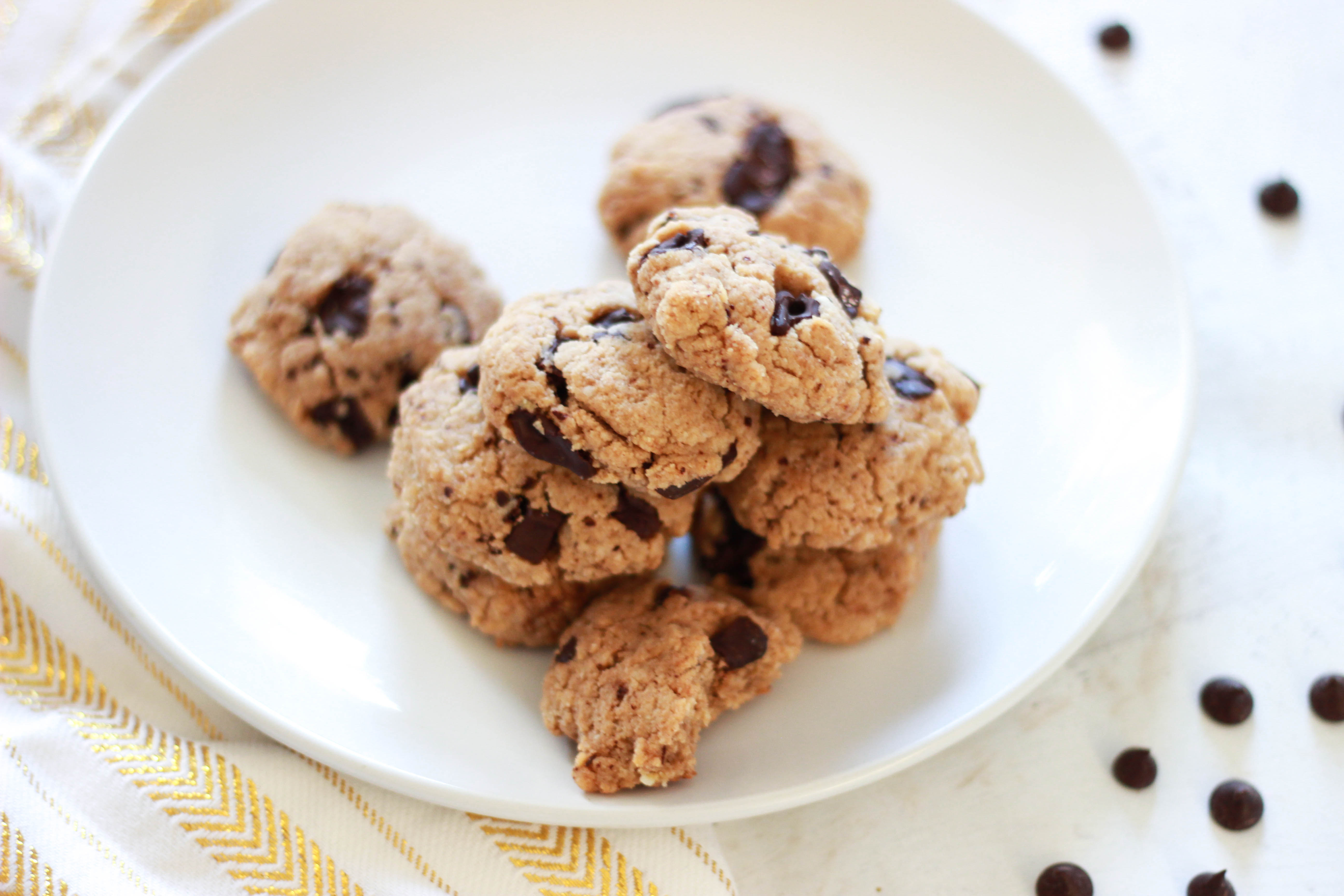 If you follow me on Instagram and watch my stories, you might have enjoyed following along as I tried over and over again to make these cookies. I made them four different times this month, tweaking the recipe and getting different friends’ opinions as I went. Why were these so difficult?! The texture was perfect straight off the bat, but the flavor needed a bit of work. 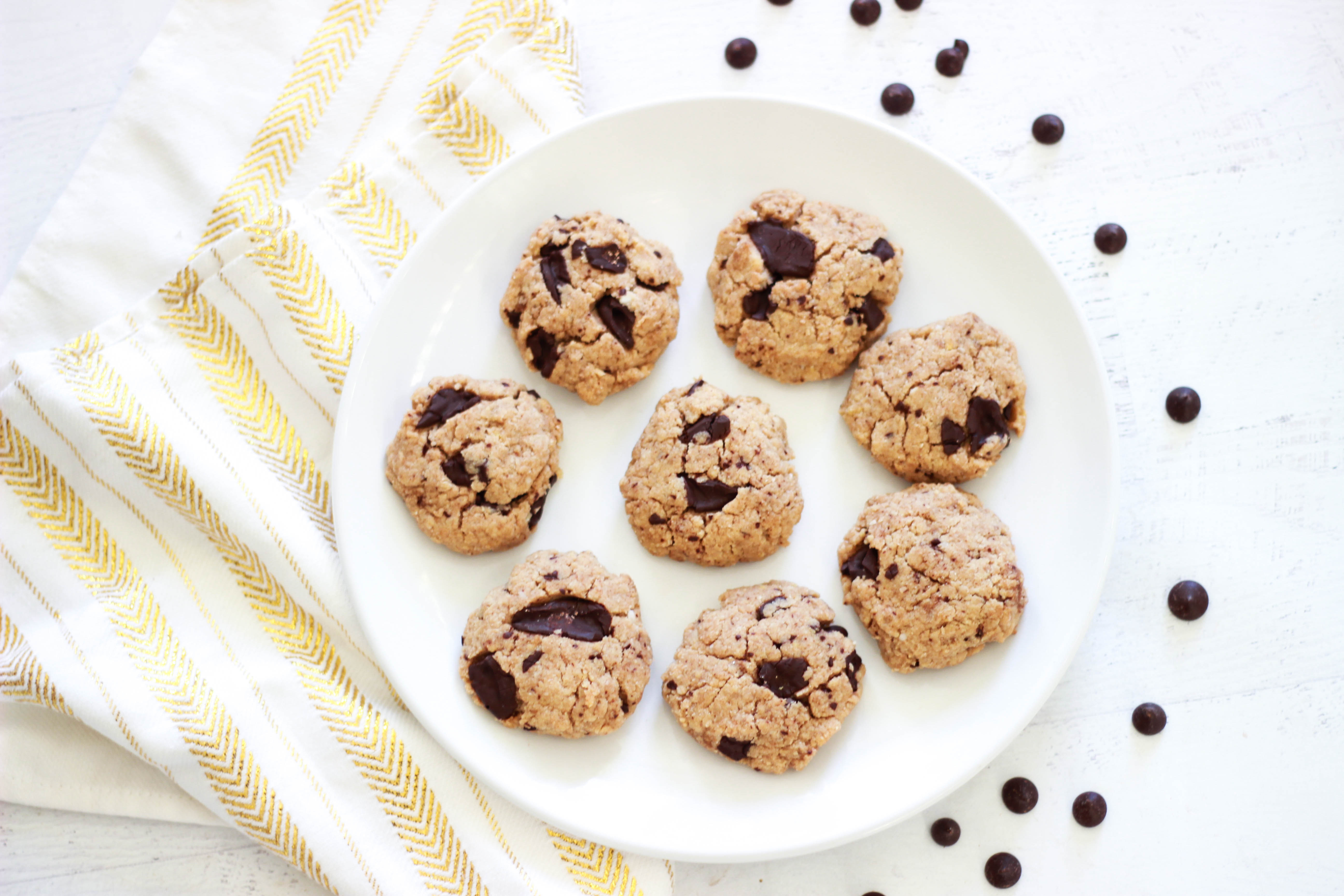 Sugar-free desserts are tricky because there’s a population of people whose taste buds are used to sweetener-free desserts, and those people usually perceive anything that contains 100% dark chocolate and nut butters to be sweet. They’re easy to please. I’m one of these. Then you have people who don’t eat sugar, but they still consume sweeteners. Those people are harder to please, because they’re often used to the taste of stevia, which happens to be 200-300 times sweeter (in powdered form) than sugar, or sweeteners like monkfruit or xylitol, which are also plenty sweet as well. Then there are people who are use to regular ole’ sugar-filled desserts. 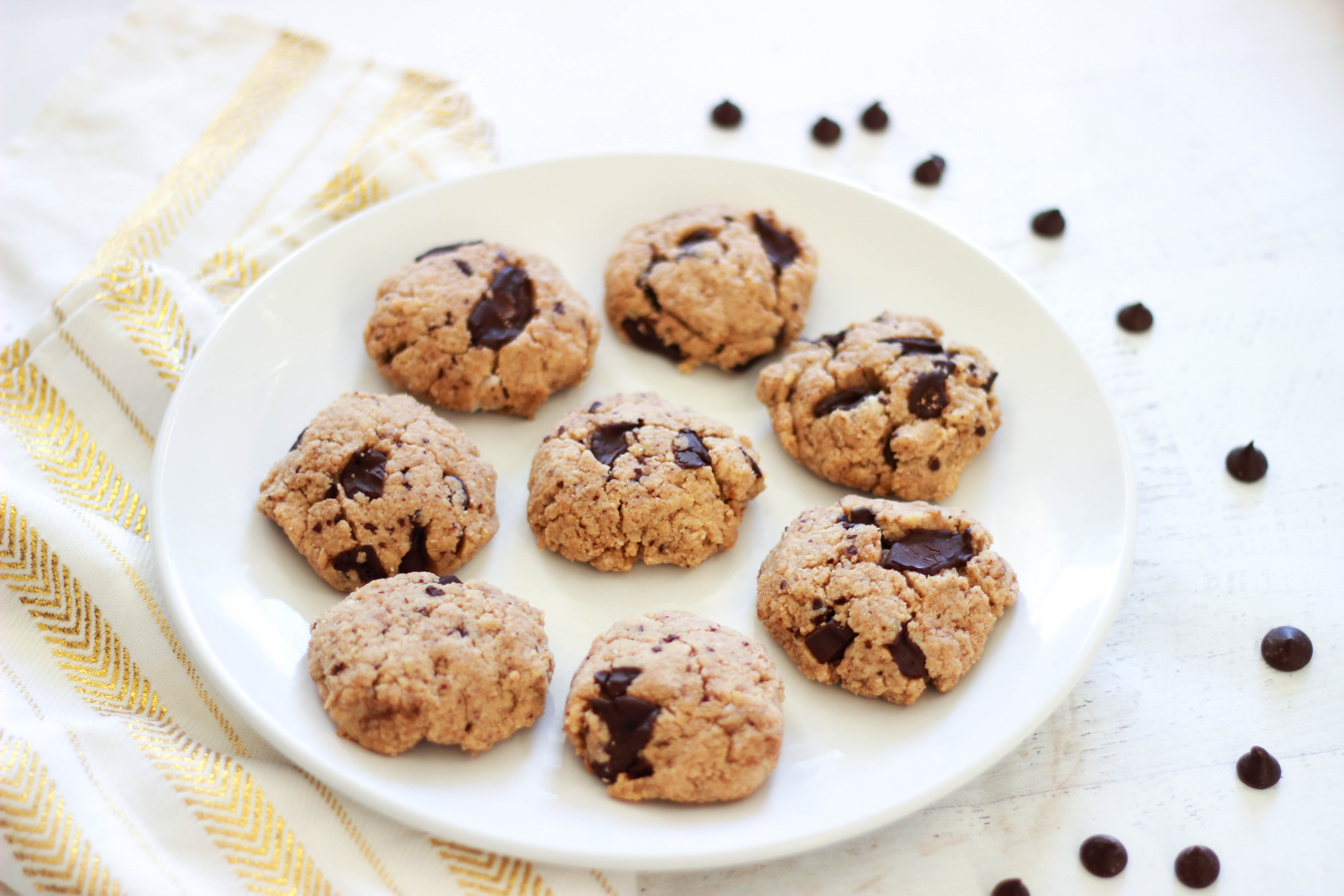 With certain sugar-free dessert recipes, my goal is simply to appeal to those who enjoy sugar-free, sweetener-free desserts, or who don’t need something excessively sweet to be satisfied. With other recipes, though, I’m determined to make something that truly anyone would like. And for others, I want to make something that anyone who generally eats healthy food would enjoy. I really wanted this recipe to be a relatively general crowd-pleaser, rather than a recipe that only those who already liked sweetener-free desserts could appreciate. Otherwise, I would’ve been done after my first try! 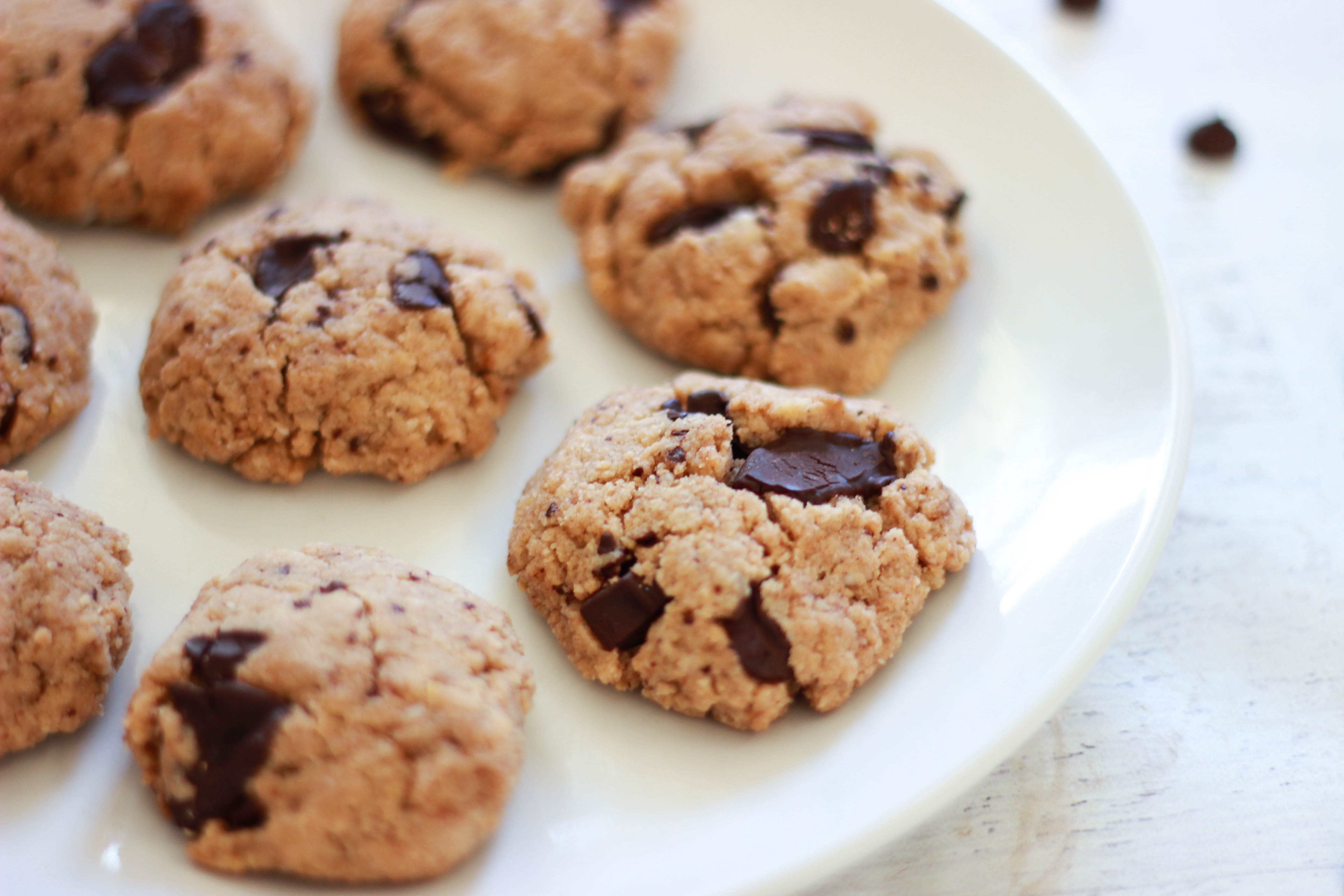 After my first attempt at this recipe (this time around), I personally loved the taste of the cookies, but I wasn’t sure if anyone else would. My friend Liz, who I’m sure many of you know, also loved them, but I don’t trust her taste buds either – they’re too similar to mine. Ha! So I made them again, slightly sweeter, and I tested them on another friend, who is more used to sugar-free desserts but does use some sweeteners. She told me the taste needed work, so I tried again, and then gave them to another friend. She wasn’t into them either, so I tried one FINAL time, and I decided to add a sweetener. Still sugar-free, though. I had to give in – because sugar-free chocolate chip cookies really DO need a sweetener to taste anything like a chocolate chip cookie.

I was trying to avoid using any sweeteners, like the desserts in my #NoSugarNoProblems ebooks, but it’s really just not possible to make a plain chocolate chip cookie that has sufficient flavor without it. What people might not realize is that what gives a chocolate chip cookie its distinct flavor really is the sugar and butter. I could replace the fat, but without any sweetener, it just tastes too plain. Not bad (like I said, I personally loved them and ate them all), but just plain. Too plain for most people. It’s easier to make flavored cookies without any sweeteners, because you can just amp up the extra flavor and highlight that. But when the flavor IS the sweetener, it’s another story. 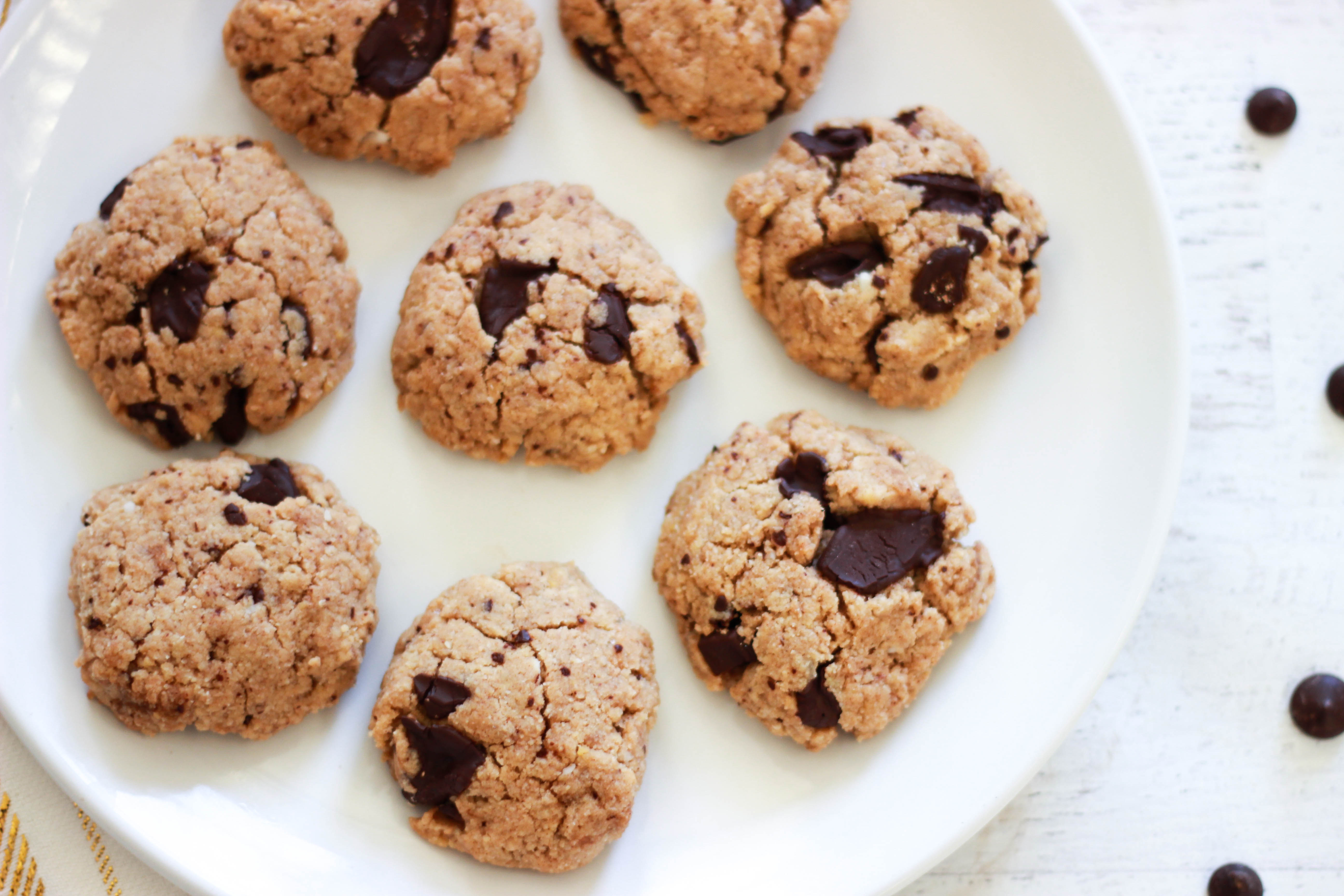 I obviously wanted to keep these chocolate chip cookies sugar-free, low-carb, keto-friendly, and paleo, though, so I decided to use just a smidge of my favorite low-carb sweetener – yacon syrup, which is also the star ingredient in my Paleo / Keto Gingerbread recipe. Yacon syrup does not get the attention it deserves, in my opinion. It’s definitely my favorite keto-friendly, sugar-free sweetener! I prefer whole-food-based sweeteners, which is why I like maple syrup or honey if I don’t mind the recipe being a little higher in natural sugars, or yacon if I want to keep it keto-friendly. 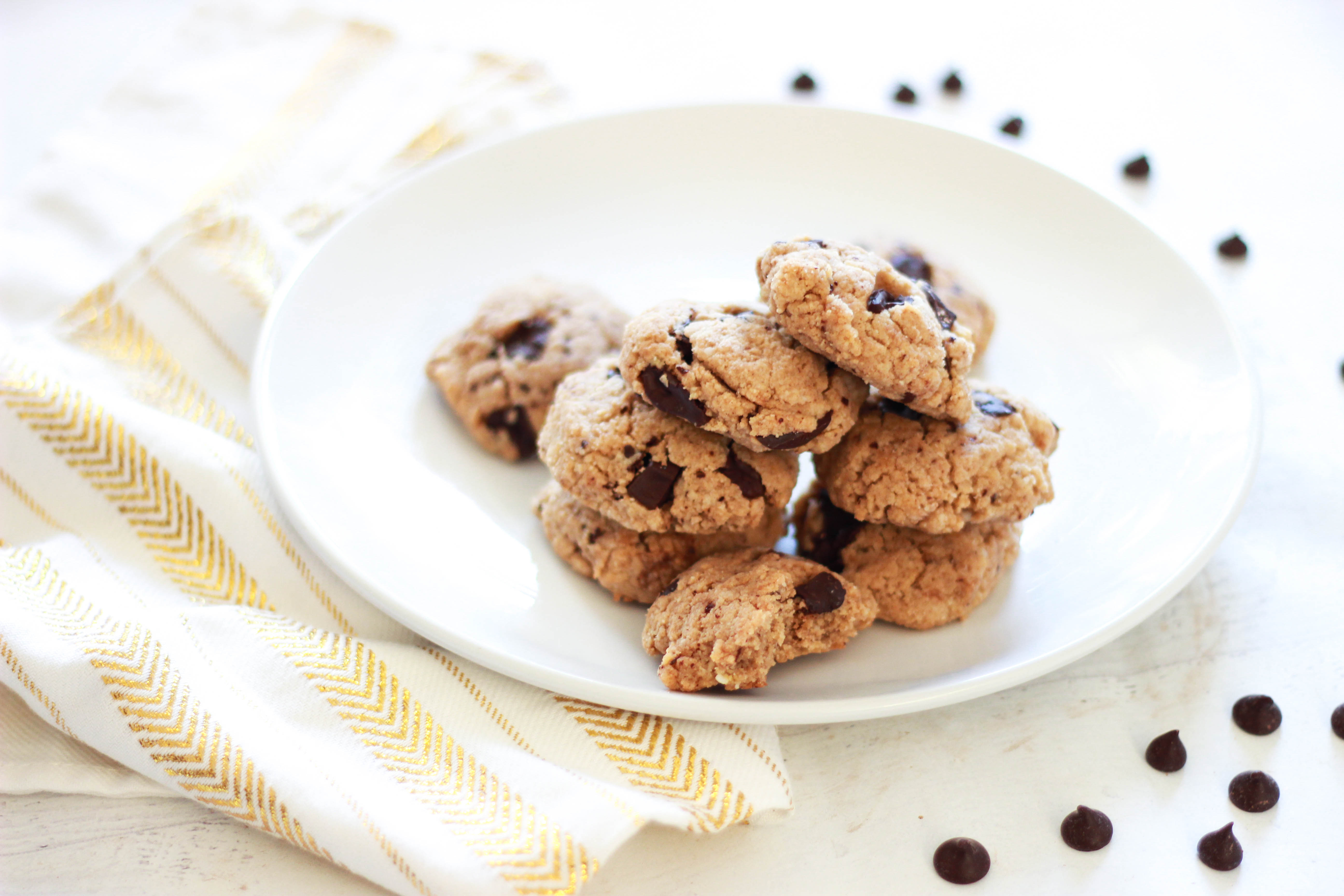 Yacon syrup is an extract from the root of the yacon plant, and in its syrup form it looks and tastes similar to molasses. I love yacon syrup because you only need a very small amount to provide a lot of sweetness! Better than that, though, is that it actually has plenty of health benefits. 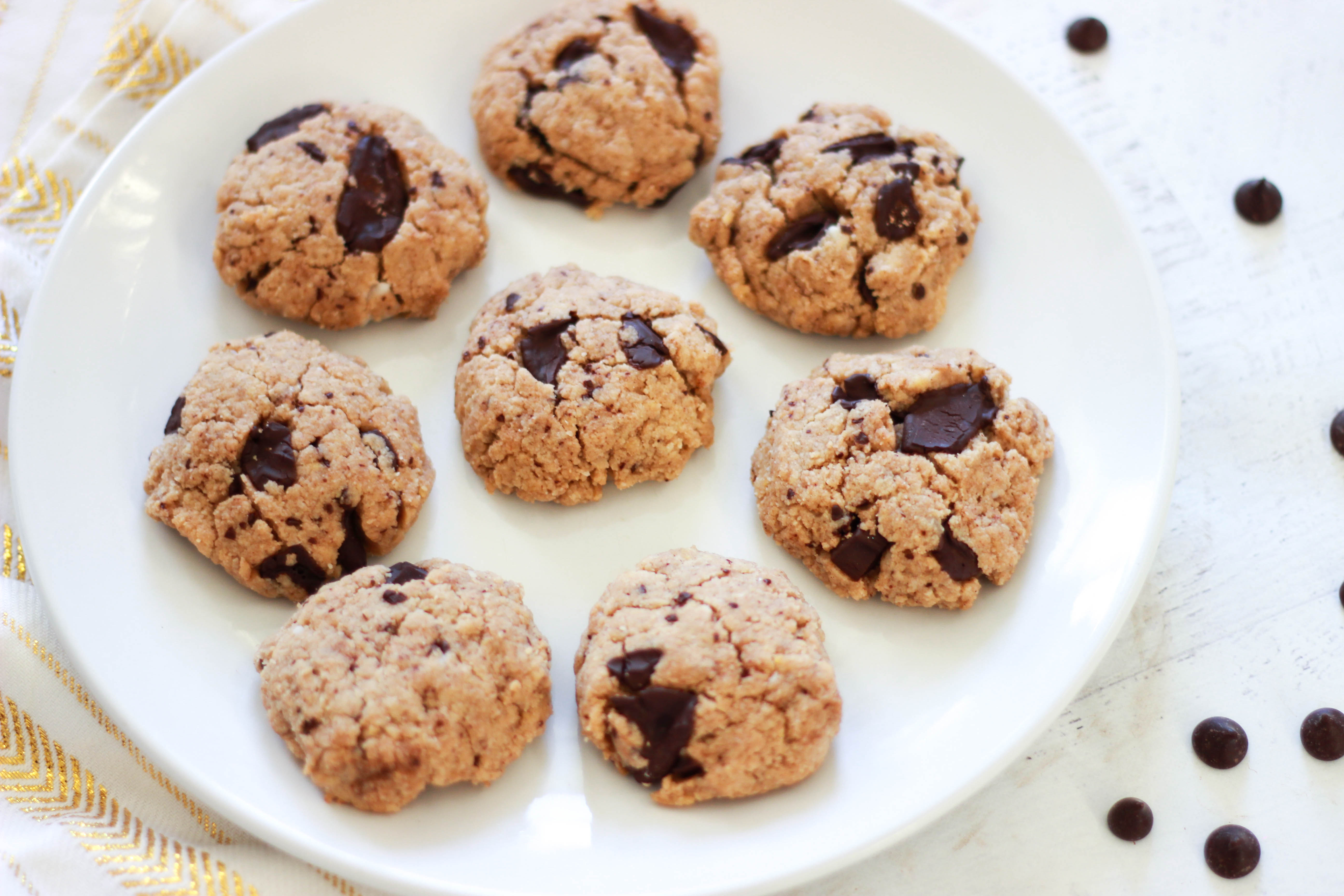 Yacon syrup is high in antioxidants and fructooligosaccharides, a type of prebiotic fiber that supports digestion and helps keep you feeling full! You can also find FOS in fruits and vegetables like bananas, garlic, onions, leeks, jicama, and asparagus. These prebiotics pass through the upper GI tract undigested and act as “food” for the beneficial bacteria in your gut. We want to make sure the “good guys” in the gut are nice and happy so that the “bad guys” are crowded out. For this reason, yacon syrup can be great for digestion and help reduce constipation for many. 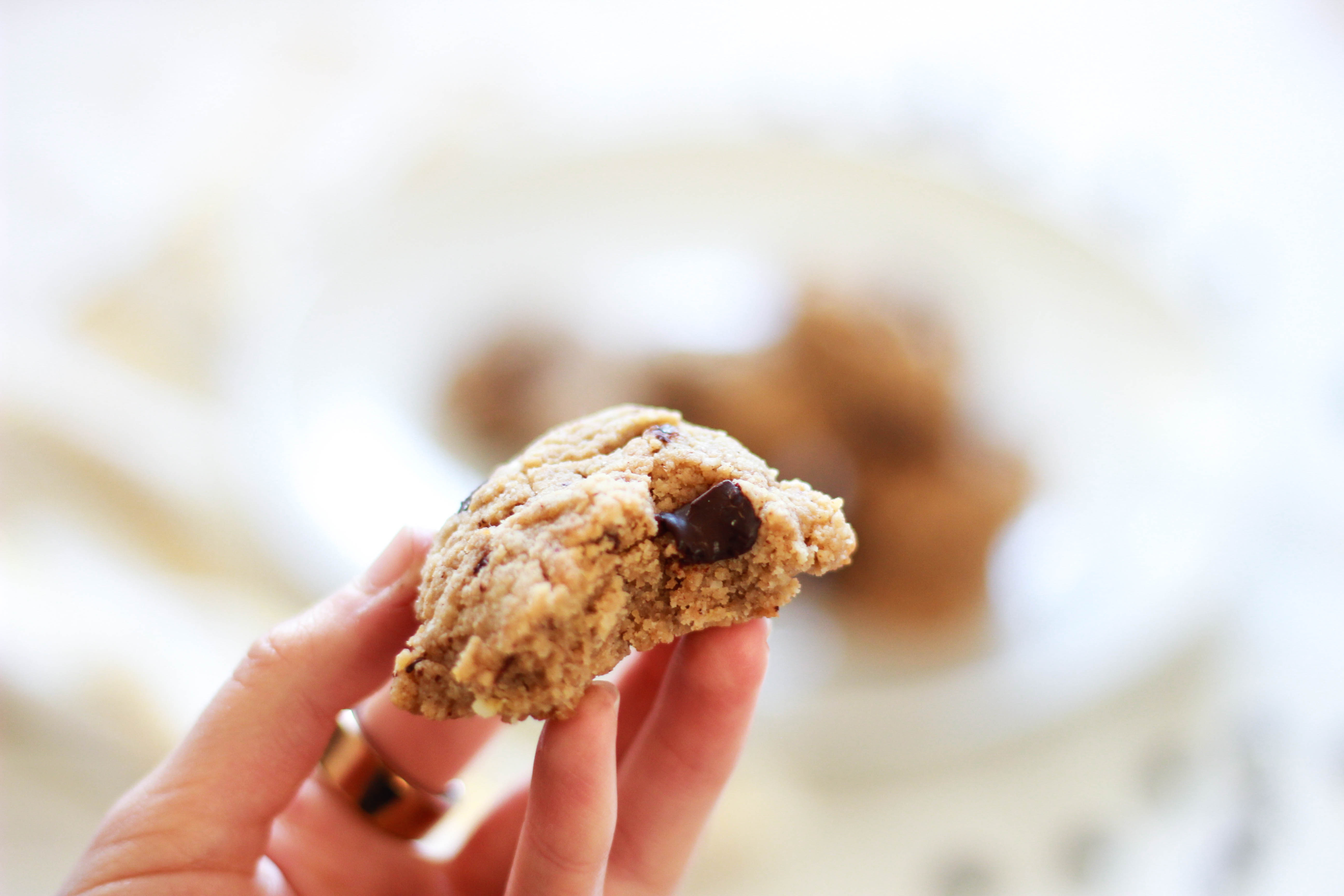 Yacon syrup has also been linked with reduced insulin resistance, easier weight loss, better bone health (because it increases calcium absorption in the body), and better immunity. It also contains cancer-fighting properties! I’m not sure why yacon syrup doesn’t get much publicity, but I really think it should! It’s a great low-glycemic sweetener with added health benefits, and like I mentioned, a little goes a long way. If you follow a low-sugar diet, then I think this is a great staple to have in your kitchen to use in baked goods or any drinks that you’d like to sweeten. 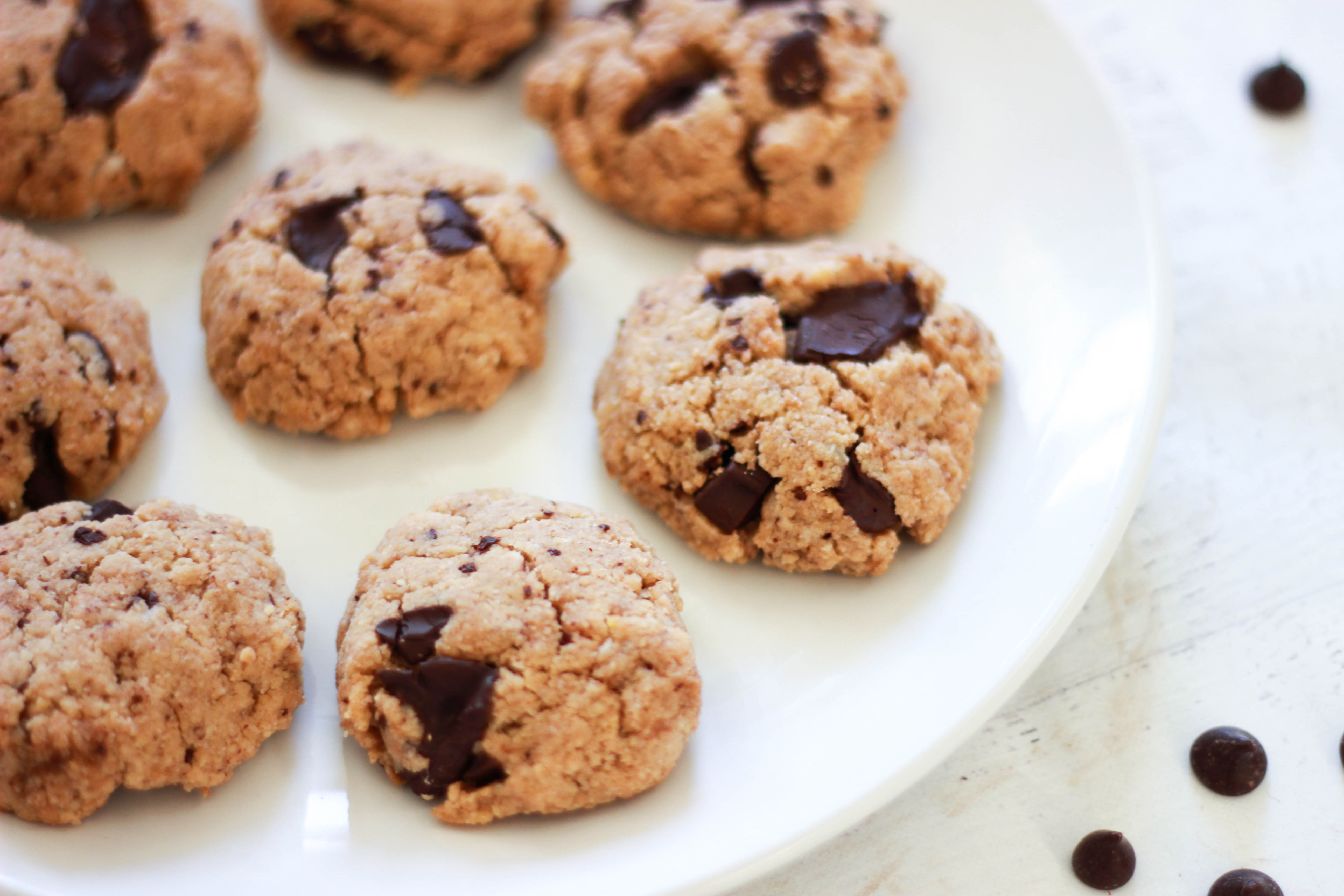 It just took a dash of yacon, and these were finally perfect. I cannot tell you how excited I am about this recipe – these are some of my favorite cookies!! They’ve been approved by people with “normal” taste buds – don’t worry. They’re delicious but not overpowering, and you can always add more yacon if you want them even sweeter. Or, use even less if your taste buds are well-adjusted to sweetener-free desserts! They’re my ideal consistency as well – the perfect combination of soft and chewy! 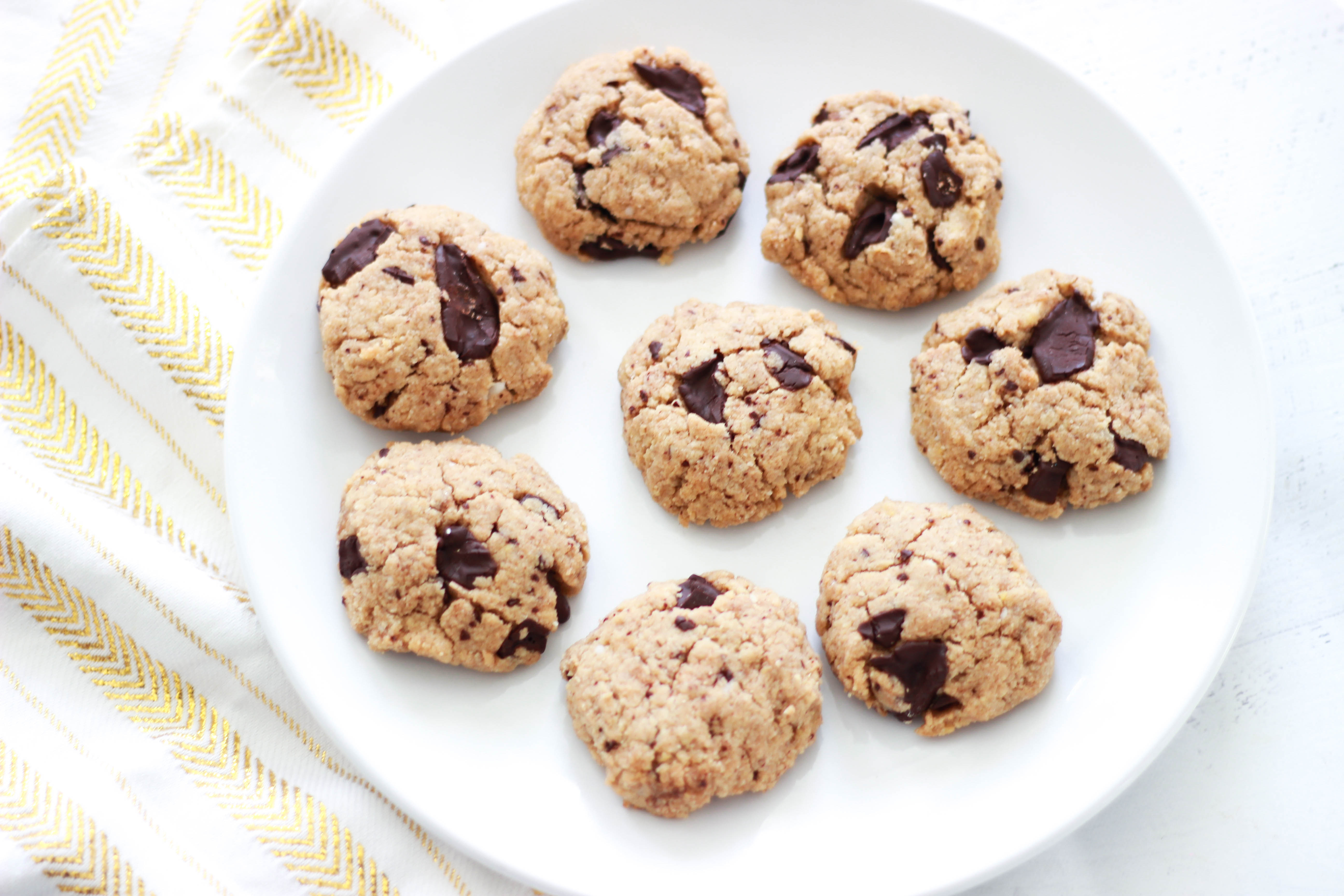 If you love a good chocolate chip cookie but don’t want the sugar, these are for you! These do not last long in front of me… and they’re extra delicious when dipped in some coconut milk or almond milk! This recipe is sugar-free, paleo, low-carb, and keto-friendly, and you can also make it vegan if you replace the egg with a flax egg or chia egg. If you’ve been looking for the perfect sugar-free cookie recipe, this might be just what you need! 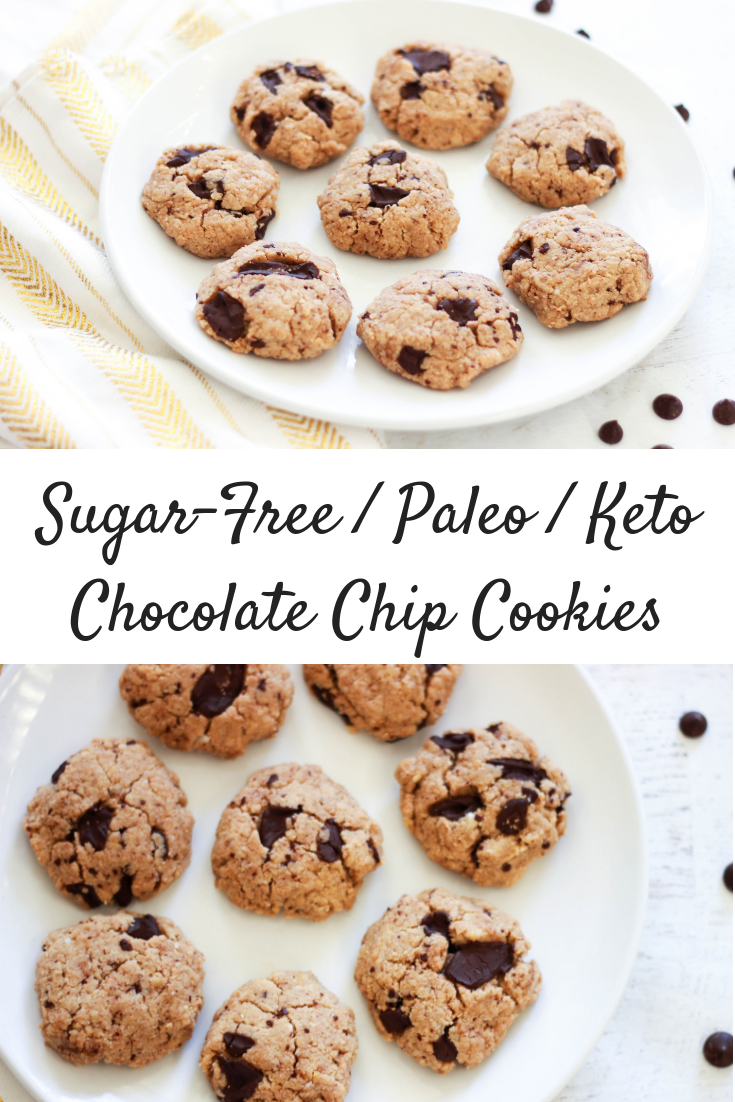 What are the best chocolate chip cookies you’ve ever had?!