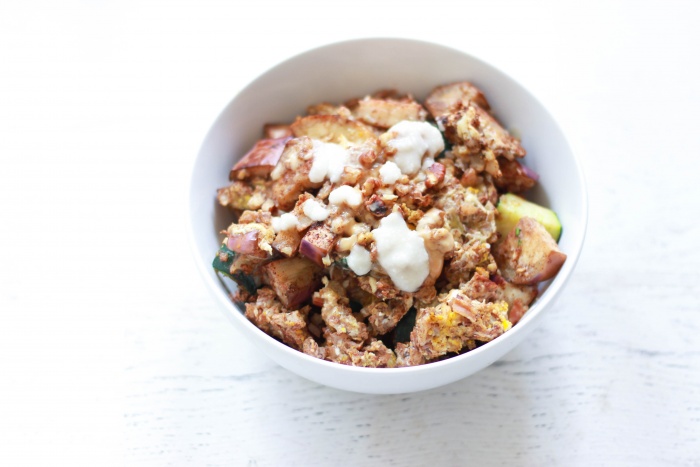 If you haven’t tried a sweet scramble yet, you’re in for a treat! I’ve been eating this for breakfast almost every day since I first tried it, and I can’t believe I didn’t make this earlier on. I was missing out, BIG TIME. It’s old news that I’m obsessed with cinnamon roasted vegetables, I know. I’m a savory person 95% of the time, but when I want something sweet for breakfast, I usually go for a bowl of cinnamon roasted veggies with coconut yogurt, some nuts, and nut butter. Maybe a sprinkle of 100% cacao. 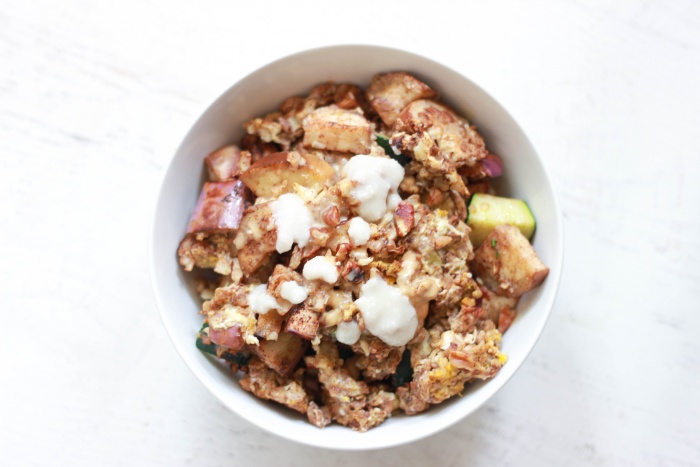 I was getting a little sick of coconut yogurt though, if I’m being completely honest, and I wanted to find more ways to make use of cinnamon roasted veggies. They are the best trick for getting in something “sweet” without actually needing any sweetener. They taste like a treat and they’re actually good for you. Almost too good to be true! It’s also a great way to get veggies into someone’s diet if they don’t usually like vegetables. My favorite vegetables to roast in cinnamon are eggplant, cauliflower, and zucchini – they taste completely different! 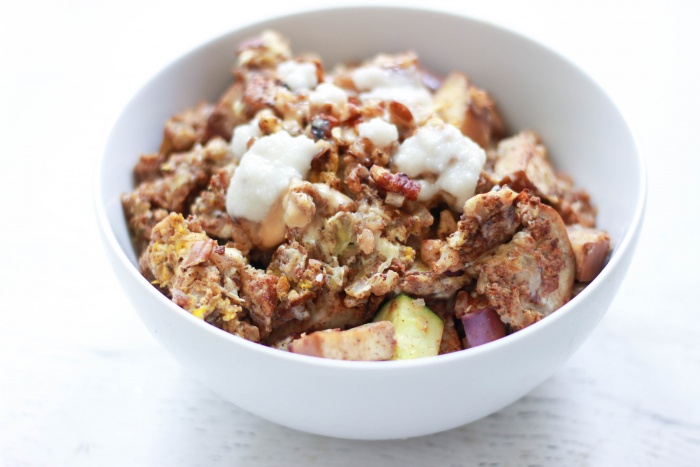 For anyone going through a candida protocol or any other sugar-free diet, I highly recommend adding these into your arsenal. I used to think I could never have “dessert for breakfast” if I was eating low carb or sugar-free, but I was wrong. A breakfast with cinnamon roasted veggies and lots of fun toppings is like dessert to me. This is the paleo, sugar-free, keto-friendly, candida-friendly version of breakfast for dessert! 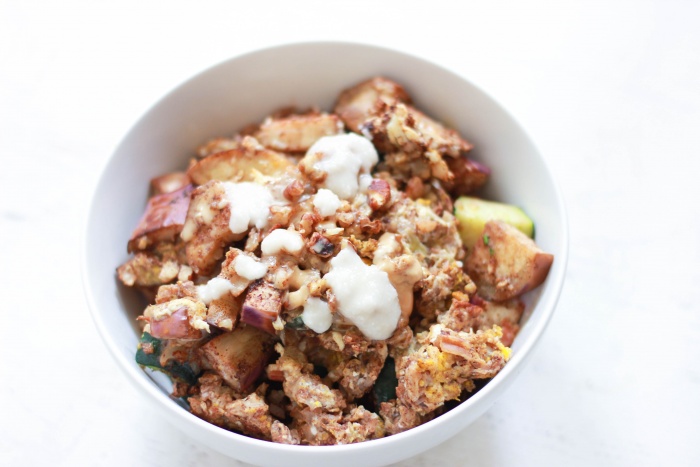 Anyways, I love my cinnamon vegetables, but there wasn’t much I liked to pair them with other than coconut yogurt. I don’t like pairing sweet with savory, so the idea of cinnamon roasted vegetables with meat was not appealing. I forget how it came up, but when I was in Dallas, we started talking about sweet omelettes. Apparently this is a thing that a lot of people in the bodybuilder world make – egg white omelettes sweetened with a vanilla protein powder and stevia. 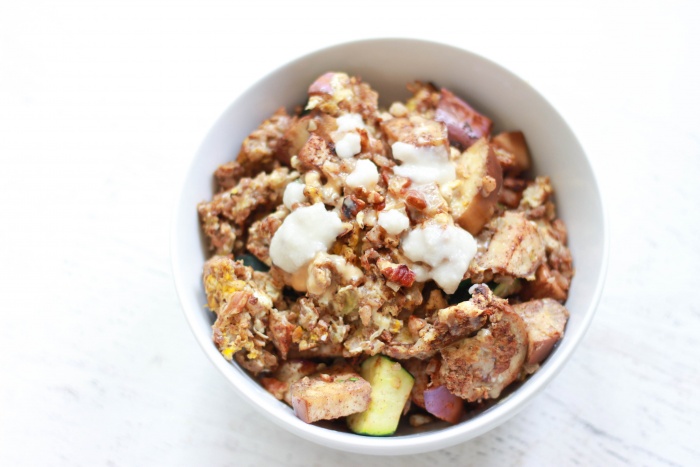 While that idea on its own definitely didn’t appeal to me, it made me realize that eggs could be the perfect thing to pair with my cinnamon roasted veggies! Eggs are amazing because they’re another “chameleon” food, as I like to call them. They go well with sweet or savory, depending how you make them! 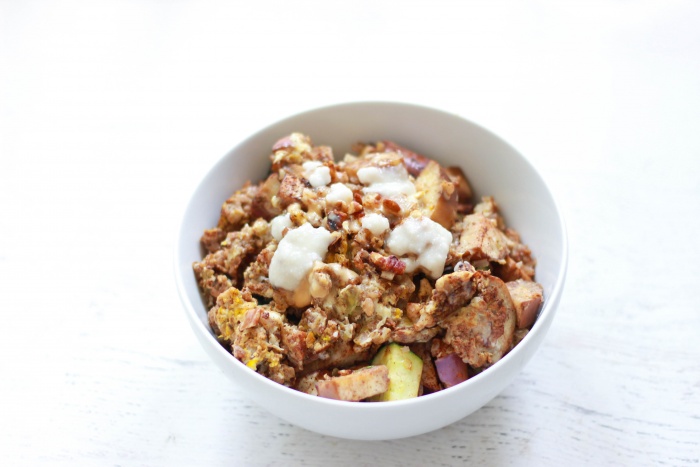 As soon as I got home from my trip, I experimented with a cinnamon roasted veggie scramble, and I immediately became obsessed. I love this because it’s a super quick breakfast that keeps you full and satiated for a long time, and it’s a nice way to switch it up from the coconut yogurt. Eggs always leave me really satiated because of their fat and protein content, so it’s a great way to start my day! I feel like this is old news, but DO NOT FEAR EGGS! High-quality, pastured eggs, like Vital Farms, are incredibly nutrient-dense and healthy. The yolks are the most nutritious part! 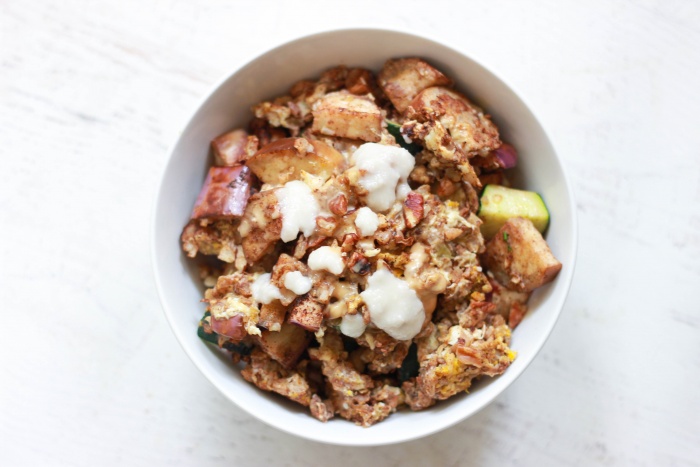 All you have to do for this recipe is add some eggs, veggies, and pecans (or any other nut) into a pan, toss on some cinnamon, salt, and vanilla, and scramble it all up until it’s cooked through! I like to add a dash of coconut milk into my eggs when I’m scrambling them to make them extra fluffy, but it’s totally optional! The pecans end up toasting in the pan, and they add the perfect crunch to round out the dish. If you have vanilla bean ghee, I highly recommend using that to cook in. The flavor is unreal! If you don’t, then coconut oil will also taste amazing. 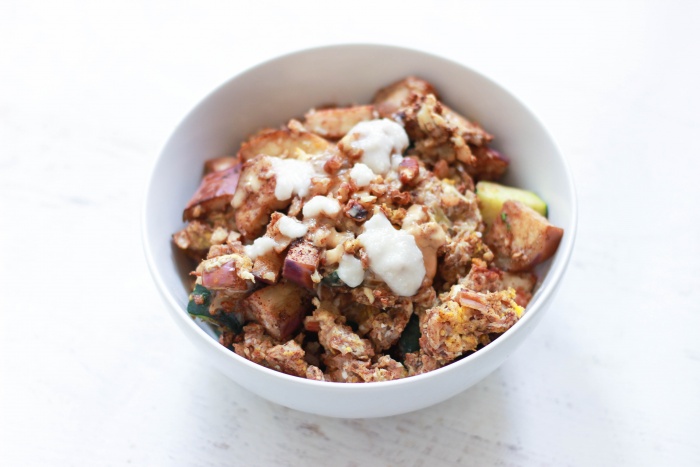 I use vanilla bean powder so that I can add it on like a spice. I highly recommend investing in some high-quality, raw, organic, vanilla bean powder. It tastes incredible, and it’s a much better source of vanilla than the liquid extract. I prefer the pure source when I can have it! I order vanilla bean powder off of Amazon, although sometimes I see it at Whole Foods. I don’t use vanilla extract in this recipe because it would most likely just cook off. The vanilla isn’t required, but it definitely makes this dish extra delicious. Also, even though this recipe is a scramble, sometimes I do the exact same thing but put fried or poached eggs on top instead. Might sound weird, but runny yolks taste amazing over cinnamon vegetables! 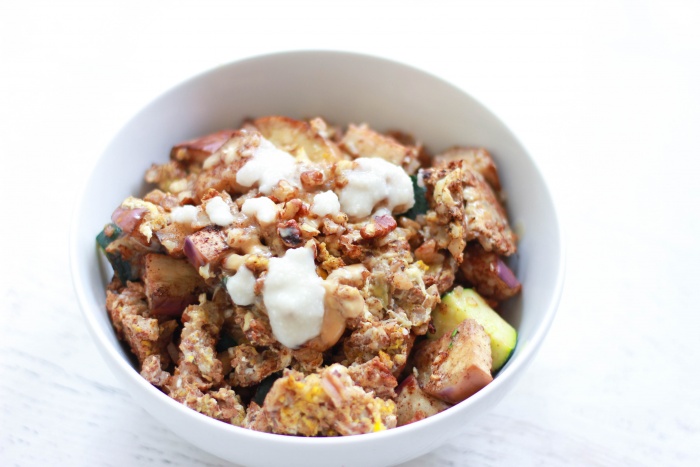 If you love cinnamon roasted vegetables, you’ll love this quick breakfast! (Or lunch, dinner, or dessert!) I used eggplant, cauliflower, and zucchini, but feel free to switch out the veggies or change the amounts of anything. I never measure when I make this – I just toss it in the pan and scramble! I love to top this with extra coconut butter, nut butter, or cacao nibs. Recently I’ve been putting some 100% cacao on top and letting it melt all over the scramble – it’s insanely delicious. Feel free to use any toppings you like! This sweet cinnamon scramble is paleo, vegetarian, totally sugar-free, Candida-diet friendly, low-carb, keto, and even low FODMAP if you leave out the cauliflower! It’s a great way to get more vegetables into anybody’s diet (especially kids), and the perfect way to satisfy that sweet tooth. You’ll get plenty of protein, healthy fats, and fiber to start your day off right, and it only takes a few minutes to throw together! 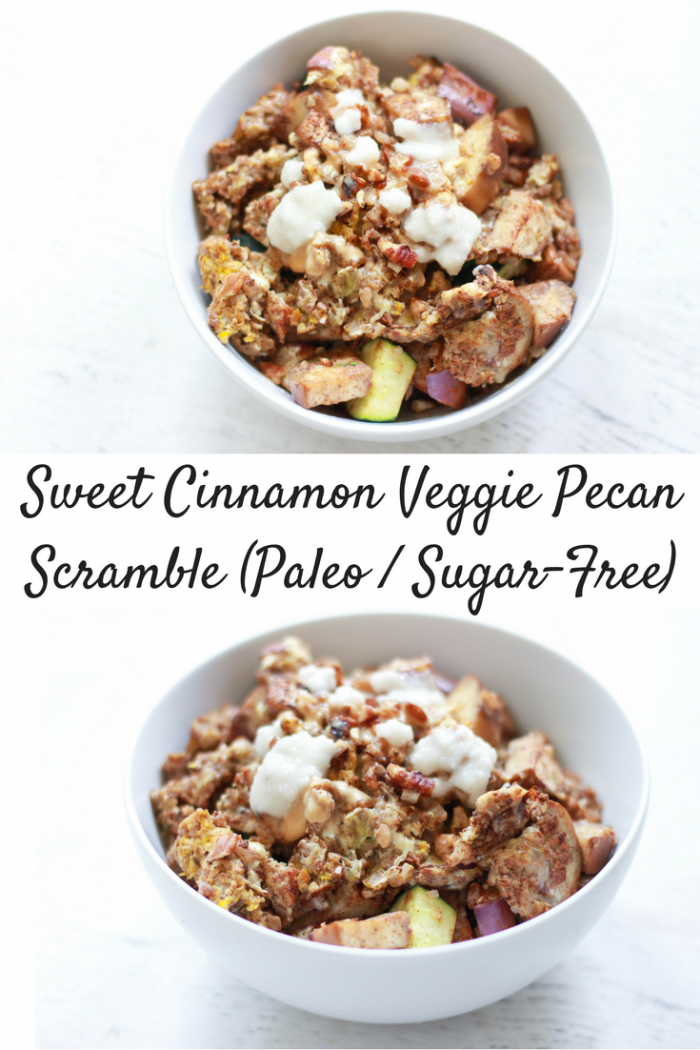 *Feel free to sub other veggies or nuts, or alter the amounts! Everything can be adjusted to your preferences. This is just my personal go-to combo! 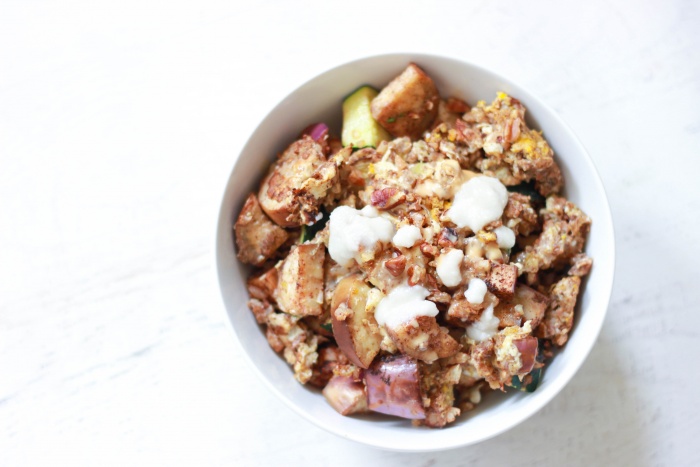 What type of breakfasts do you prefer – sweet or savory?! Let me know in the comments!