What Your Aura Color Means 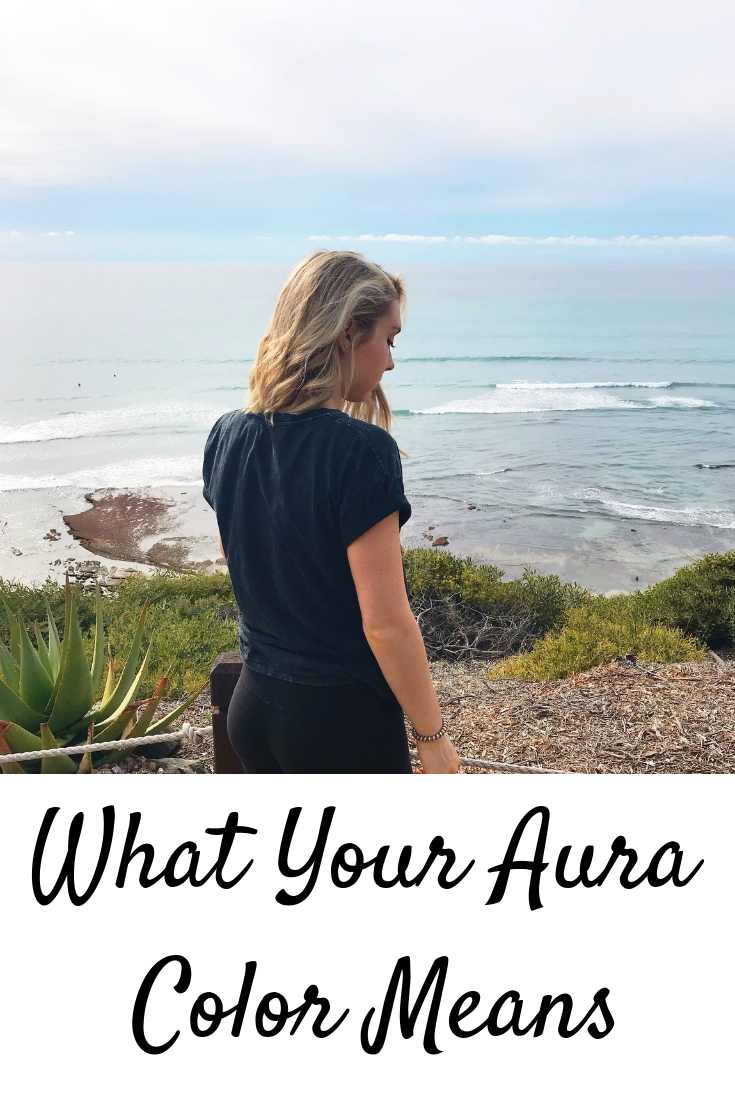 Working with color is a big part of my Reiki practice, especially when it comes to auras. Every Reiki session begins with an aura scan, and clients always want to know what exactly their aura color means!

What is an aura? We all have our physical bodies, but we also have our energy bodies, our auras. Your energy body extends out as far as your fingertips and has a vibrational frequency, and those frequencies can be seen as colors in the auric field. The aura actually consists of seven different layers, or auric bodies, that each have their own frequency.

Your aura radiates different colors depending on your vibrations, emotions, and state of mental, physical, and spiritual health, which means it can reveal information about your current feelings, dreams, and overall energy status. Auras can be light, dark, vivid, dim, multi-colored, or one predominant color. Sometimes people’s auras are consistently one color, and other times their aura shifts constantly. Everyone is different!

The brightness of your aura can also indicate how strong your energy is. Oftentimes a brighter aura means you have strong energy, and a weaker aura means there is less energy. If your aura’s shade is lighter, it could be a new energy for you, while a stronger shade might mean it’s been your auric energy for a long time. That being said, those shades can also have other meanings, as I’ll discuss below.

There are no “bad” auras, although certain colors might suggest you need to work on certain parts of your energetic or physical body to find balance again. Dark colors might indicate that you have blocked energy in your body, suppressed emotions, or deep-rooted fears. More on this later…

Remember that when it comes to the meaning of your aura, there is a lot of fluidity in interpretation. These are generalizations, but the color of anyone’s aura should always be interpreted in context. While certain colors might generally indicate specific emotions or feelings, it might be different for the person in question depending on their situation. Context is everything! That being said, I want to go over some of the common interpretations of different aura colors.

A yellow aura is associated with happiness, optimism, hope, inspiration, intelligence, and growing spiritual development. It can indicate the growth of new ideas, growing wisdom, and mental clarity. It’s also associated with playfulness and an easy-going attitude.

Lemon-yellow often indicates the person is struggling to maintain control or has a fear of losing control in a relationship, job, health, or their lifestyle. This color is often seen in people who are worried about losing prestige, respect, or power.

A pale or light yellow is usually associated with some type of new awareness or spiritual journey. It can indicate optimism and excitement about something new.

Darker, muddier yellows often indicate the person is overanalyzing things and being overly critical. This color is common for students who are studying a lot, overthinking things, and stressed.

An orange-yellow typically indicates the person is detail-oriented, a bit of a perfectionist, creative, and intelligent. This person usually has more of a scientific mind and loves mental challenges.

A very bright orange aura can indicate overcoming some type of addiction or stress-related appetite for something. Muddy oranges, on the other hand, can indicate vanity or too much pride.

A red aura is associated with passion, strength, and taking action. It’s related to our primal urges, and usually indicates the person has a strong passion and drive to succeed and excel in life. A very clear red aura typically means the person is energetic, competitive, sexual, passionate, or powerful in some way. These people attract and repel other energies very strongly.

Dark, deep reds indicate the person is grounded, self-reliant, survival-oriented, active, and can handle anything thrown their way.

Clouded, muddy reds indicate a negative energy and a deep-rooted anger that the person hasn’t gotten rid of. This can be connected with money worries, a lack of forgiveness, anxiety, or nervousness in general.

A pink aura typically means the person is loving, compassionate, affectionate, tender, kind, and gentle. It might mean you’re an artist, or that you’ve recently fallen in love. People with pastel pink auras are often quiet, modest, and loving.

Dark pink auras can indicate the person is dishonest, not trustworthy, or immature.

Muddier pinks usually indicate an emotional imbalance where the person gives too much of themselves and sacrifices their own needs for those of others.

A blue aura usually indicates peace, quiet, calm, seriousness, and speaking your truth. People with blue auras often like to help people, are able to remain calm and collected when things get stressful, and are there for others to lean on. Blue auras are associated with people who are more sensitive and who have developed a strong inner guide. They can also indicate that the person feels lonely, or that they’re on the journey to connecting with their higher self and sense of intuition.

Light, soft blues represent someone who is peaceful, truthful, good at communicating, and intuitive.

Royal blues often mean the person is very generous, giving, open to new things, and have new opportunities coming. It can also indicate that the person has a strongly developed sense of spirituality.

Dark, cloudy blues usually mean the person doesn’t trust the future, is afraid to face or speak the truth, and is afraid to express themselves.

People with green auras are usually very connected with nature and are some type of healer. This is common for teachers, those in the health field, or anyone else who works for the public good. Green indicates love, healing, innocence, harmony, personal growth, compassion, and an open heart. These people often love animals, and they’re usually very social.

A yellow-green represents someone who is creative and communicative, like an actor or writer. Light green auras usually represent love, healing, and innocence. Forest green auras are common for healers or those who are especially connected with nature. Emerald greens are also associated with healers, or anyone who really just exudes love.

Dark, muddy greens often indicate feelings of jealousy, resentment, victim-mentality, insecurity, or low self esteem. These people are often sensitive to being criticized. They also might be possessive in nature, refuse to accept responsibility, and are afraid of being unlovable.

Turquoise auras usually represent powerful healers that can help others find their own truth and health. These people are usually sensitive and compassionate, and they are often therapists, doctors, counselors, or another type of healer by profession.

Purple auras are very powerful and indicate the person is intuitive, imaginative, and connected with other worlds. People with purple auras usually have psychic abilities, can lucid dream, and have powerful visualizations. Violet auras represent people who are leaders, visionaries, and can create change with their spiritual power. Indigo auras are associated with people who are highly intuitive and sensitive – these are HSPs. Lavender auras are common for those who are highly imaginative and identify as daydreamers.

Silver is the color of abundance and can indicate spiritual or physical wealth. This color aura can indicate that the person has plenty of money, is about to come into a lot of money, or is experiencing an awakening of their mind. Bright silver indicates the person is open to new ideas and new ways of seeing the world.

Gold auras are associated with enlightenment, divine protection, wisdom, and inner knowledge. This aura often means the person is being guided by divine beings and is in the process of higher spiritual development.

Rainbow auras are usually found in people who work as energy healers and who are very in-tune spiritually. This can also be found in a star person, or anyone in touch with another dimension.

Black auras often mean the person is holding on to negative feelings, is unforgiving, or is in some type of disease state. It can also indicate unresolved grief or pain from a past life. If there is a physical imbalance or blockage in the body, this can also show up as a black aura. If someone has pain or sickness in a certain area of their body, it will usually show up around that body part.

Although black can be a sign of dark, negative energy, it can also be a sign of quiet and peacefulness. It really depends on the overall color of the aura and its vibrancy to be able to tell the true meaning.

Grays can also indicate blockages in certain parts of the body. They might also indicate that the person is going through a spiritual awakening, but things are cloudy while they’re in the process.

Muddy gray overlays in general will indicate a sense of guardedness and blocked energy, while muddy brown overlays can represent insecurities and holding onto unwanted energy.

White auras typically represent purity, truth, and new energy. This color aura is found in people who are very spiritual, innocent, and honest. If flashes of white light are seen, this can mean that angels are nearby, or it can indicate that someone will be pregnant soon!

Some auras don’t have one distinct color but look “earthy” – this is common for people who love the earth, are grounded, and who like to work outdoors.

Pastel shades, in general, represent sensitivity and a need for calm and peace in order to feel balanced.

Knowing your aura can give you great insight into your underlying emotions or personality traits, even if you don’t realize them! Do you know your aura shade? Do these descriptions resonate with you?