(If you haven’t read my blog from last week about starting to write more personal updates / diary-style / random reflection posts again, make sure you check this one out.)

The last week hit me like a big yellow school bus.

I got home from my trip to Denver a week and a half ago (which was wonderful, by the way), and immediately came down with a bad case of food poisoning. Yikes. 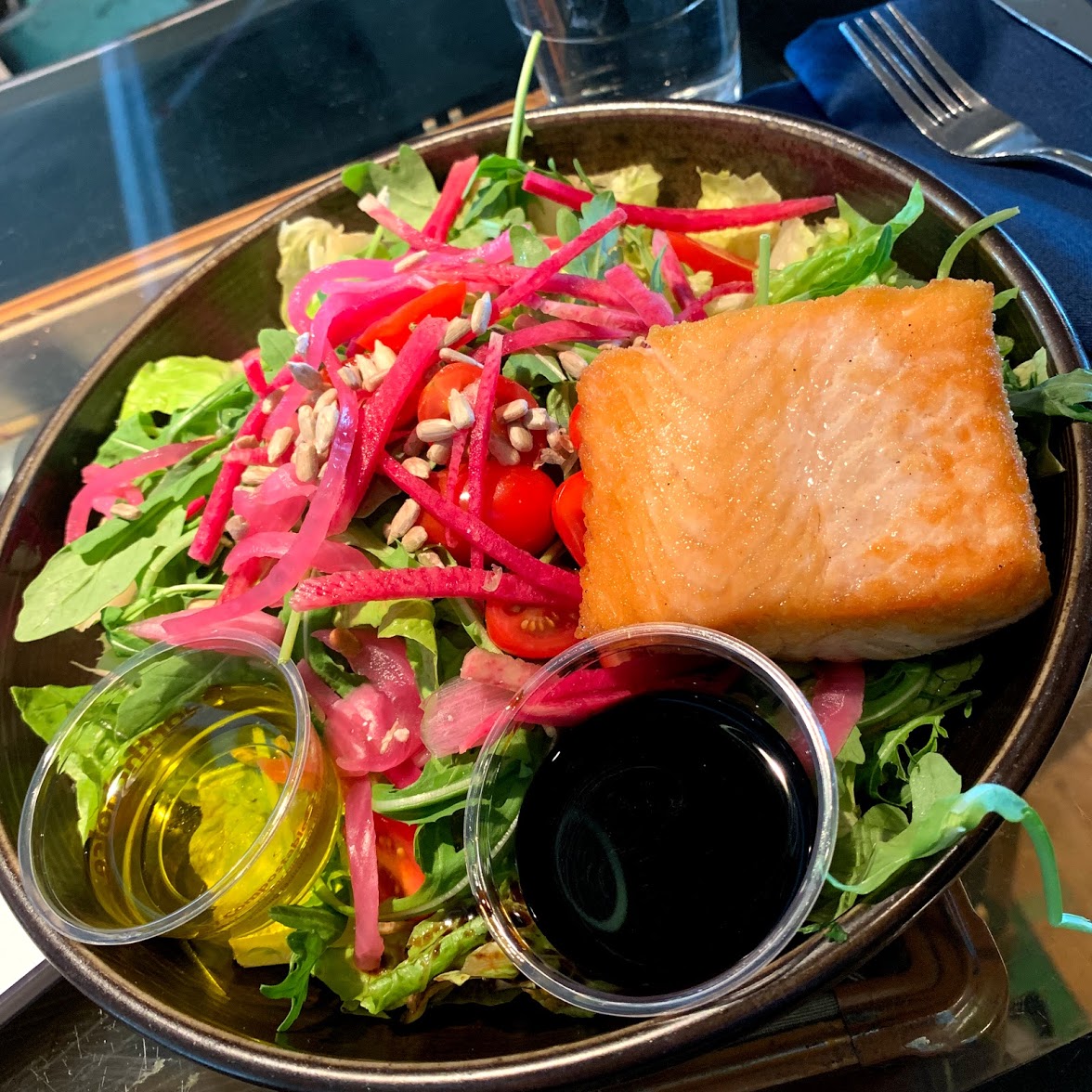 I am 99% sure I got the food poisoning from the salmon on this salad from Root Down at the Denver airport. I know, I know – don’t eat fish at the airport. But Root Down is a pretty nice restaurant, and I didn’t get a chance to visit the original restaurant during my trip, so all of my friends recommended I go to the restaurant at the airport because it was basically the same thing. Root Down in the airport is a sit-down, nice restaurant, so I didn’t feel like I was getting sketchy food. The ironic thing is that I chose this salad thinking I was “playing it safe” instead of getting something more adventurous because I just wanted a simple meal after 5 days of restaurant food.

So much for playing it safe!

Anyways, when I got home that night I made myself a lovely, home-cooked dinner that included a lot of kabocha squash and chicken, and I wanted a good night’s sleep because I knew I had a long week ahead. Whenever I get back from travel I’m extra exhausted and have about twice as much work to catch up on, so I needed to be in the zone. Unfortunately, I didn’t sleep at all that night because I felt so nauseous, got sick by the morning, and spent the next two days with a fever, unable to get out of bed. I quite literally felt like I got hit by a bus.

That might have been the universe’s way of forcing me to slow down, because I had actually decided to schedule in a day of complete rest the weekend after I got back home. First, though, I had to crack down on my to-do list of about 50 things, but I definitely couldn’t get to them once the food poisoning hit me. Thank you, universe. I am generally the kind of person who can’t be stopped by anything, so you know I’m feeling really bad if I can’t even check my emails. It took me a full 12 hours to record 5 minutes of a podcast intro because I pretty much kept falling asleep for an hour after every 20 seconds of recording. (That math definitely doesn’t work out, but you get my point.) I was not feeling like myself, to say the least. I could also pretty much only stomach apple sauce, paleo bread (this is the kind I like), and sliced turkey deli meat.

I was back on my feet in about 3 days, but my stomach took about 5 or 6 days to get back to normal. For about 6 days, I truly thought I was never going to be able to look at a vegetable again, which was very concerning. Don’t worry, though – all is well now.

Part of why the food poisoning hit me so hard was because it emotionally took me back to 4 years ago when I had my “trigger episode” that really launched the worst part of my health struggles. I ate some froyo, got some type of food poisoning (years later discovering it was a parasitic infection) that made me extremely ill for over a week, and after that my gut stopped working properly. I couldn’t digest food, I dropped down to 73 pounds despite eating 8,000-10,000 calories a day, and my whole life felt like it was spiraling out of control. I truly didn’t know if I was going to survive, and doctor after doctor told me I was a mystery case and there was nothing they could do for me. Good times.

Anyways, I have come a long way since then, and I also have not been that sick since then. This stint of food poisoning reminded me of that trigger episode, and for a moment it felt like total deja vu. I thought, Have I been here before? Is it happening again? That whole experience four years ago left me with some type of PTSD (I know that is a serious term, and I use that term because that is what both my psychologist and psychiatrist at the time used to describe what I experienced), and certain feelings, objects, and emotions can bring me back there. It’s a very uncomfortable place to be. But it was good to tap back into that fear again, because I was able to show my brain that this was not the same as last time, and it wasn’t going to happen again. It was just a brief, unfortunate food poisoning accident that lasted a few days, and it wasn’t going to flip my life upside down like what happened four years ago. It’s easy to shy away from uncomfortable thoughts and feelings, but it’s actually most beneficial to sit with those emotions and use the experience to shift any negative brain pathways.

And it didn’t flip my life upside down. I feel fine now. I definitely need some extra gut love after the food poisoning, so I’m supporting myself as if I have leaky gut for the next 1-2 months, just to heal and seal my gut. I was a little frustrated that I had sent in a GI map literally the week before this happened, but such is life.

Anyways, it ended up being a blessing in disguise. First of all, it forced me to lay in bed and sleep, which I needed. Second, that experience helped teach my brain that what happened before (when I got sick in college) would not happen again. Third, it ended up being a very useful, although strange, sort of elimination diet for me.

I toy around a lot with my diet, as I’m sure you know, and the last two months I’ve been eating very high carb (for me, that is), and much lower in fat than I typically do. It’s a total 180 from how I’ve eaten the last four years of my life, but I’ve been having a lot of fun with it and really enjoying it. It cracks me up how shocked my friends are – they are definitely not used to me eating this way. I’ve been feeling great in a lot of ways, but I could definitely tell I was intolerant to some foods I was eating, so I needed to figure out exactly what they were.

That’s why this ended up being a helpful kind of elimination diet. I could only stomach a few foods for a few days, and during that time my inflammation decreased by a lot, so I used the reintroduction process as an opportunity to figure out what has been making me more inflamed recently.

Even though it wasn’t the most ideal route to get there, there were some benefits to getting food poisoning. I have been feeling much better since cutting certain foods out of my diet in the last week, and I’ll probably need to keep them mostly out until I’ve supported my gut more. I never would have figured out those intolerances had I not gotten sick and felt nauseous from so many foods for those few days!

So, there is the silver lining in the experience! There always is. I plan on writing a post that goes more in-depth about my transition from a low carb to higher carb diet, because it’s been a huge change for me (one that you’re probably shocked by if you’ve followed along for awhile), and I’m loving it. Also, for anyone struggling with chronic illness, remember that just because you used to be “the sick one” doesn’t mean you will be forever. I could’ve wallowed in the food poisoning and took it as a sign that I will keep getting sick and always will, creating a self-fulfilling prophecy, but I’ve rewired by brain to know otherwise. There’s major freedom in that.

In the meantime, I’ll be focusing mostly on turkey, salmon, beef, and eggs as my protein sources, and switching up my veggies and fruits. I was so scared I would never be able to eat kabocha squash again since that’s the food I ate right before I got sick, which would be a tragedy since I adore kabocha. I can definitely look at kabocha squash again, but it might be awhile before I’m ready to swallow it! 😉