My Carnivore-ish Diet: Healing from Mold and Autoimmune Disease 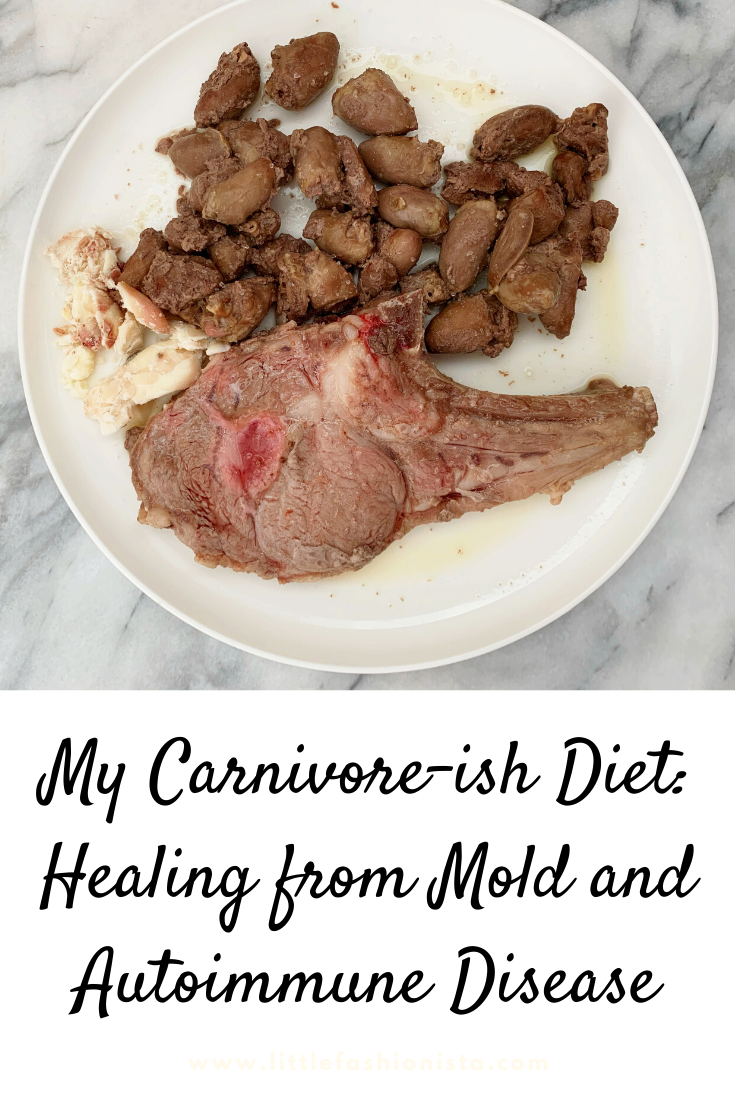 I’ve been eating an animal-based diet for almost 5 months now, and it’s had a huge impact on my digestion, inflammation, mood, and energy levels. I say animal-based because my diet is not strictly carnivore, although it started out that way. I like to say I eat 95% carnivore, 5% paleo – a.k.a. carnivore-ish. (I recently published a podcast all about my carnivore-ish diet and adaptation period, and you can listen to that here!)

I tried the carnivore diet about a year ago for 2 weeks, but this year I gave it a full 30 days to see if it would help support my body as I went through a mold / Lyme protocol. I’ve read a lot of testimonials from people saying that a carnivore diet helped put their Lyme into remission, so I was curious how I’d feel.

The first 30 days were honestly a very rough transition. I stuck to a meat-only diet and ate only beef with some poultry products here and there. I also consumed ghee and later raw better, as well as bone broth and plenty of salt. I drank mostly plain water but had tea a few times. The diet itself was very easy for me, but for the first 30 days I had a lot of flu-like symptoms, extreme fatigue, and horrible diarrhea. The only thing that kept me going was the fact that my body’s reactions were most likely a sign of toxins and bad bacteria dying off – at least SOMETHING was happening.

After that first month, my body evened out and I started to feel better than I had in a loooong time. My brain was functioning properly, I had more energy than I had in years, my bowel movements were great, my digestive symptoms went away, and my inflammation had improved DRAMATICALLY. I was finally starting to feel like myself again, and I loved the fact that I didn’t have to think about food as much and spent way less time cooking. For about 3 weeks around the holidays I was enjoying plenty of foods outside of the animal kingdom (hello holiday treats and Maui acai bowls!), but even within that stretch I tried to eat animal-based as often as possible.

I’ve toyed with adding other foods in here and there over the last five months, and now I’m at a point where I’m very happy with my carnivore-ish diet and have a pretty good idea of what makes me feel my best. My philosophy with my version of carnivore is that I eat carnivore whenever possible, and if I’m in a situation where it’s absolutely impossible or if I simply don’t want to then I don’t. Pretty simple. The situations where it’s absolutely impossible or that I simply don’t want to eat carnivore don’t end up happening too often, and I just let it happen if it happens! I feel my best when I eat as closely to a carnivore diet as possible, which makes me want to stick with it, but I allow flexibility for social engagements if needed. Even when eating out, it’s not too hard to find animal-based options. There’s usually always meat on the menu! If I eat a few plants once every few months, it’s not a big deal – I just try to keep the portions small.

What do I eat on my carnivore-ish diet?

Anything from the animal kingdom! I eat a lot of ground beef, ribeyes, chuck steak, and organ meats. Organ meats are nature’s multivitamin – they are bursting with nutrients. I also think they taste delicious, and they’re usually very cheap! My favorites are livers, hearts, and brains. Sometimes I throw in lamb, salmon, boar, or chicken thighs. I have turkey, eggs, and salmon roe occasionally. I also consume raw beef suet, ghee, raw butter, colostrum, and goat’s milk. And plenty of sea salt. I love pork rinds for a crunch, and beef sticks if I’m on the go!

What about foods that aren’t traditionally part of the carnivore diet? Things I consume daily that are outside of the animal kingdom are mainly in the form of drinks. I drink tea (including matcha), coffee, Four Sigmatic elixirs, coconut milk, and apple cider vinegar (always drink this diluted). I also have my Beekeeper’s Naturals products and Ned hemp oil daily. The BKN products are technically carnivore because they’re bee products, but most people don’t consume honey on the carnivore diet. I usually have EnergyBits every day (my body responds really well to chlorella), and some of my Sugar-Free Apple Pie Gut-Healing Gummies, which are made of gelatin (carnivore) and apple cider vinegar (not carnivore).

What about foods that aren’t carnivore, but that I consume every so often? I’ve figured out that I feel really good when I have carbs in the form of tubers or berries for about 3-5 days before / during my period. I know when I need them because I get the craving for them, so I just eat them! I have them at night for a few days, usually topped with some honey, and I feel like this really helps reset my leptin signaling and helps with my hormones. I know I’ve had enough when I stop craving them and start craving more meat again. I will also sometimes get massive cravings for chocolate, so I eat some 100% cacao, because that’s what my favorite chocolate has always been.

I also do well with coconut oil, coconut butter, paleo bread (I get this bread from Julian Bakery – it’s the only bread I like), and certain paleo-friendly bars, like Bulletproof Bars, Primal Kitchen Bars, and Lara Bars. I do not feel well if I have those regularly, but once in awhile they’re fine. I also actually do well with low-glycemic ice creams, as well, interestingly enough!

I notice that when I consume plants or other carbohydrates, I have more inflammation the next day, I don’t sleep as well, my brain doesn’t feel as clear, my emotions feel all over the place, and my digestion is not ideal. I bloat up like a balloon when I have a bowl of veggies. (And my GI map is clear, if you were wondering.)

I start my day off with fatty tea or coffee, with collagen in it sometimes, so I get a few hundred calories in in the morning. Then I usually eat two very large meals, but sometimes it’s more if I feel hungrier. If I wake up hungry I will eat! It just doesn’t happen too often. I eat to satiety. Did I mention I eat BIG meals? I usually end my day with sparkling water with glycine powder in it to balance out my methionine:glycine ratio, especially if I haven’t had collagen – shoutout to the Armstrong sisters for their “carnivore soda” creation! For people who are afraid of calories: I have actually more than doubled my caloric intake compared to how I was eating before carnivore, but I lost over 10 pounds of extra water weight / inflammation. I am also exercising less.

That’s my version of a carnivore-ish diet right now! I don’t have autoimmune or mold symptoms anymore unless I’m in a moldy place, eat a lot of foods outside of what’s mentioned above, or am severely sleep deprived / don’t take care of myself. Although this might not be for everyone, this way of eating has played a huge role in my healing journey. Eliminating the plant toxins that were causing underlying inflammation allowed my body to truly focus on repairing. People have asked me how long I plan on eating this way, and my answer is… as long as it feels good for my body! I’ve tried every diet under the sun and am more than open to shifting my way of eating whenever my body calls for it. Until then, this is what’s working for me!