Did the Carnivore Diet Get Rid of My Food Intolerances? 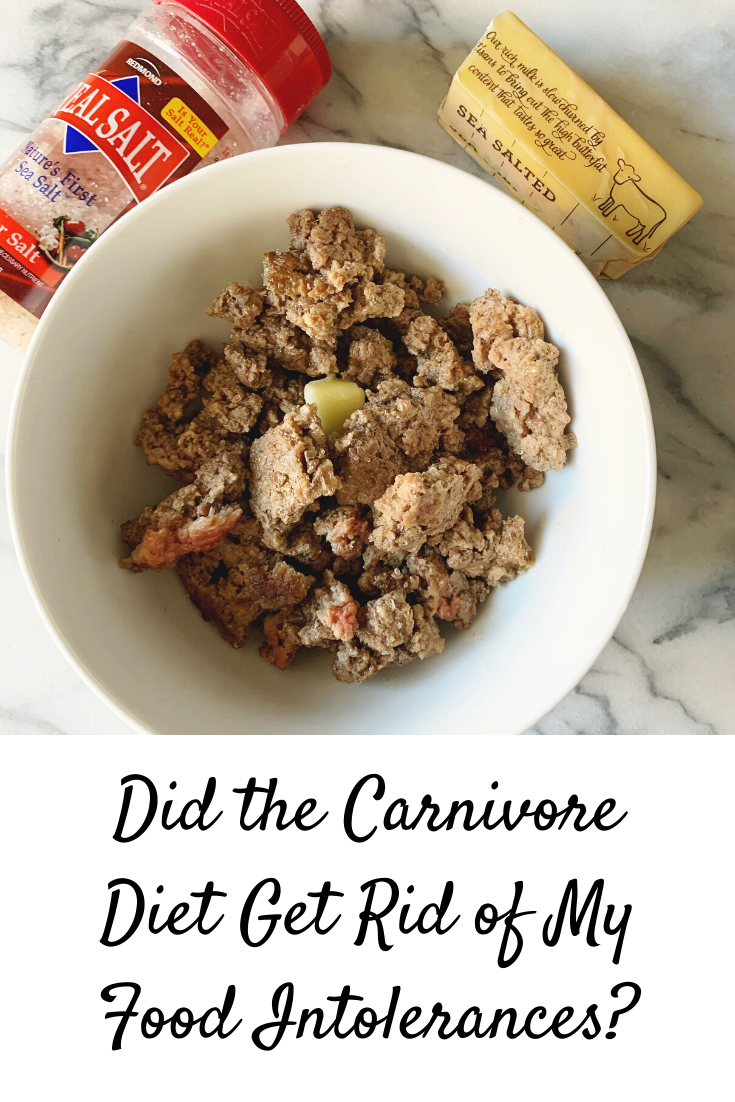 When I first became interested in the carnivore diet over a year ago, the healing stories really amazed me. People were healing from autoimmune diseases, severe gut issues, hormone imbalances, mental health disorders, and, of course, food sensitivities. One of my friends tried the carnivore diet very early on in its popularity, and he told me he wanted to see if it could get rid of his gluten intolerance. This friend had been following a strict ketogenic diet for years and is extremely well-versed in health science (it was actually his job to research ketogenic diets, amongst other things). He couldn’t remember the last time he had tried pasta, pizza, or any kind of bread. So he did the carnivore diet for 30 days, and afterwards he reintroduced gluten with no issues. He ate a bowl of pasta with no symptoms. That definitely peaked my interest. Not because I have any desire to reintroduce gluten (head here for my thoughts on consuming gluten), but because the carnivore diet clearly acted as a very strong gut reset. It went past being the ultimate elimination diet – it was actually healing the gut.

I tried carnivore for the first time over a year ago and only stuck with it for 2 weeks. I tried it again this year and stayed strict carnivore for about a month and a half, during which time I could definitely tell my body was healing. During the holidays, I started eating more carnivore-ish to prevent any extra stress, and I let myself eat whatever I wanted when we went to Maui at the end of December, which ended up being acai bowls, ribs, and fish. By the end of that trip, I was very ready to get back to eating carnivore. My body honestly felt awful.

Since then, I’m back to eating carnivore-ish, which currently is about 97% carnivore. I feel best this way right now. Anyways, something interesting that happened after my first full 30 days of carnivore was that some of my food intolerances seemed to go away. In some ways, eating carnivore made my reactions to plant foods even worse than before because my body wasn’t used to digesting them, but I was shocked at what happened with dairy, coffee, and gluten.

The first thing I’ve noticed is that I no longer have immediate reactions to dairy. (I can’t comment on what’s happening internally, though.) In the past, consuming dairy always gave me a lot of digestive issues and triggered cystic acne. Whenever I’d have it, that night I’d be in severe pain, get extremely bloated, and either have awful diarrhea or get super constipated. #SorryNotSorry if TMI – that’s what I’m all about. The next morning or the following day, I would ALWAYS wake up with  4-5 cysts forming under my skin.

Since my strict month and a half on carnivore, though, nothing noticeable seems to happen anymore when I eat dairy. I first tried raw, grass-fed dairy, and I had zero problems. I felt pretty comfortable having that regularly, and consider it a healthy addition to someone’s diet if they tolerate it. Then I tried pastured butter, and everything was fine. Then I tried regular butter, regular yogurt, heavy whipping cream, normal eggnog, and regular ole’ milk chocolate, and I was fine. Aaaaand to be honest, I was having a lot more than you might expect. I did notice that after about 2 weeks of consuming it every day, my stomach did not feel great, but that could have just as easily been because the foods I was eating that contained dairy also had plenty of sugar and carbs, which I suspect was really the issue. Very unlike me, but I was curious to test my limits, if I’m being honest. This excites me not because dairy will be a regular part of my diet, but because the carnivore diet is definitely helping me heal. I still prefer not to consume dairy because I don’t want it to activate my immune system internally, affect my hormones negatively, or trigger cravings, but it’s good to know that I’ll survive if it happens to be in something I eat.

The next thing I noticed is that I’ve been tolerating coffee quite well. Christina, drinking coffee?! Who am I?! I feel like a different person because I’ve been drinking more caffeine, but it’s making me feel good, and my adrenals have improved immensely in the last few months. Coffee, though, used to always give me stomachaches, and now I can have it regularly without any stomach pain.

Lastly, the gluten! This is not something I wanted to test out on purpose because of my autoimmune disease, but I accidentally ate some gluten in Hawaii, and I survived. Right after I ate the dessert I felt a little stomach pain, but I took some charcoal and it went away. When I’ve accidentally consumed gluten in the past, typically I’m in excruciating pain for quite some time, throw up, get a huge rash on my body, get blurry vision, and / or have full body aches to the point where I cannot get up for days. There have been about 2 times when I accidentally got glutened and nothing happened, but that’s not the norm. So I’m not totally sure if this was a fluke or really showing that my gut has healed quite a bit, but it was an interesting experiment. I won’t be pushing the limits on that or testing it out, but thought you might be interested in that experence!

Either way, I’d say it’s a win that my immediate symptoms to dairy have seemed to go away. This isn’t the most profound effect of the carnivore diet on my body, but I’d say it’s a very interesting one and useful to know if you are someone who really does just want to add dairy back into their diet. I’m excited to see how things continue to change as I keep eating mostly carnivore.

Any questions? Drop them below!